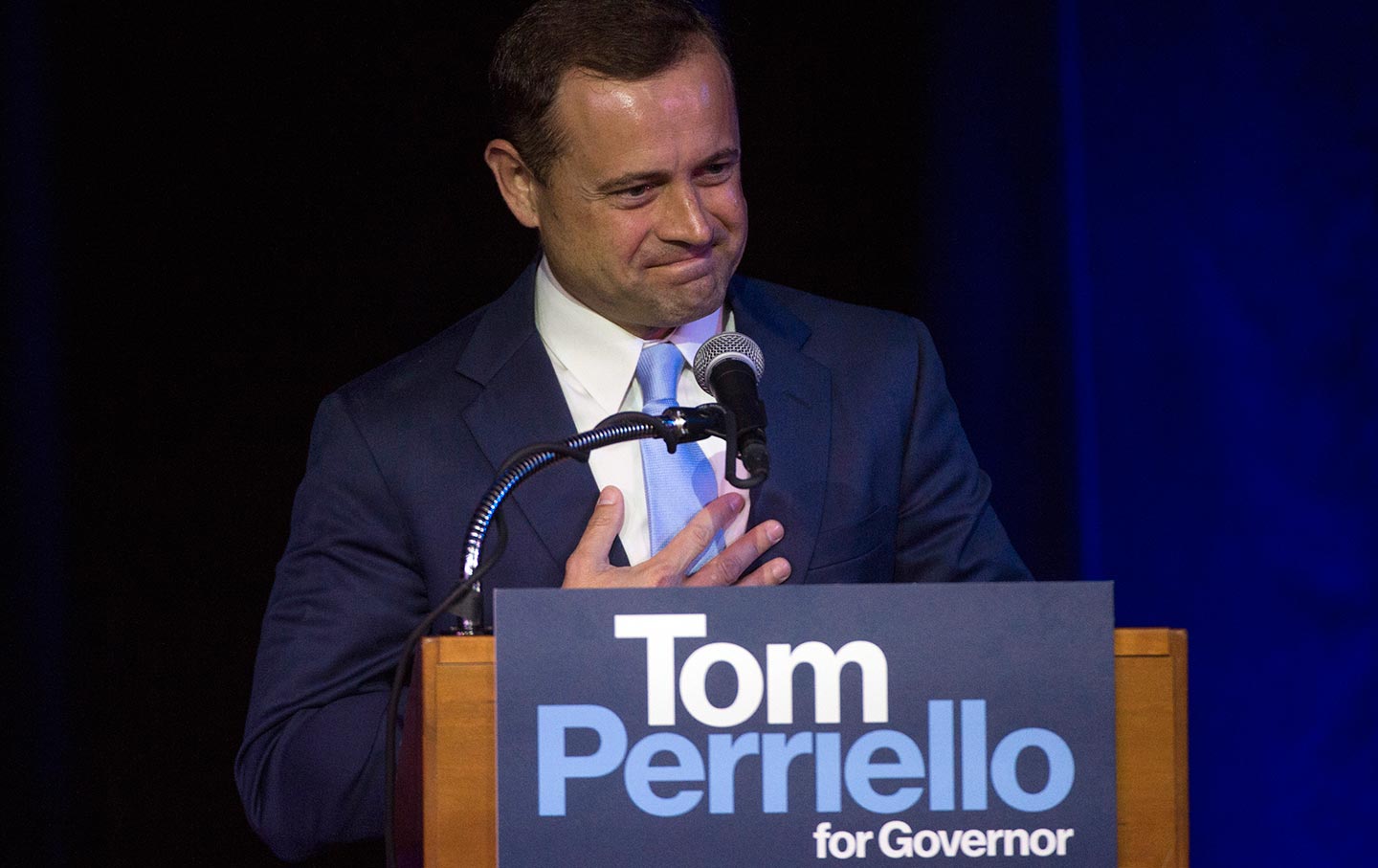 In the grand sweep of things, Tuesday night’s Democratic primary in Virginia was an enormous victory for the left. Former representative Tom Perriello came out of nowhere late in the process, staked out a starkly progressive agenda predicated on fighting inequality and racism, and racked up 41 percent of the vote. The winner, Lieutenant Governor Ralph Northam, moved left throughout the primary and is likely the most progressive Democratic nominee in the history of Virginia.

Perriello’s run directly moved Northam to the left on several issues. When Perriello announced he was running on a $15 minimum wage, he was the the first candidate for statewide office ever to make that pledge—and Northam quickly became the second just one day later. Perriello made free community college a centerpiece of his campaign very early on, and Northam later came out with a free-community-college proposal for certain high-demand jobs.

When Northam went after Perriello, it was usually to ding the former congressman for being insufficiently progressive on both gun control and abortion rights. Northam wasn’t the preferred candidate of many activist left groups, but still stands in stark contrast to past Democratic nominees and governors. Consider that when now-Senator Tim Kaine won the governor’s mansion in 2005, he declared, “We proved that people are more interested in fiscal responsibility than ideological bickering,” and “that faith in God is a value for all and that we can all share regardless of our partisan labels.”

Progressive groups who backed Perriello are happy to declare victory and move on. “When Tom Perriello entered the race a few months ago, nobody expected a competitive race,” said Adam Green of the Progressive Change Campaign Committee. “The reason this race became so competitive in a few short months is that voters are increasingly hungry for visionary progressives who believe in challenging power—from systemic racism to corporate control of our democracy and economy.”

But there are still some warning lights flashing for progressive Democrats who want to take on established Democrats and move the party left—unless, of course, they are happy with moral victories and not electoral wins.

Many commentators shooed away the idea that Perriello vs. Northam was a proxy battle for Sanders vs. Clinton. And it’s absolutely true this comparison suffers in many different respects. Perriello is not a Democratic Party outsider nor did he adopt the bulk of Sanders’s platform. Northam is a pretty poor avatar for Hillary Clinton, and indeed the voting patterns on Tuesday night did not overlay onto the results from last spring’s Democratic primary—Perriello did well in both Clinton’s best districts and also places where Sanders did best. Northam’s winning map didn’t look like Hillary’s.

But the race was still emblematic of a larger divide in the Democratic party, even if it doesn’t track with the particulars of the Sanders/Clinton race. Perriello laid out a plainly more progressive economic platform, and hoped he could win by activating a coalition of liberals, millennials, and rural voters to his side. He received Bernie’s endorsement—at one of the largest rallies of his campaign—and also Elizabeth Warren’s. Northam had current governor Terry McAuliffe and Senators Tim Kaine and Mark Warner in his corner, moderates all. (It’s true that Perriello’s staff was mixed between former Clinton and Sanders staffers, and he received the endorsement of some inside-DC players who backed Clinton, though it’s hard to imagine many voters based their vote on the prior job of Perriello’s press secretary.)

Perriello’s campaign directly took on Dominion Energy, which has an electric monopoly in most of the state. He refused any Dominion campaign donations, demanded that a Dominion-linked pipeline project be shut down, and promised to work to decrease the company’s monopoly power. This was a big difference with Northam, who took substantial donations from Dominion and did not oppose the pipeline. Perriello was picking a fight with a big bully who he believed was screwing over voters—and also exposing some real divergences on the party on the environment. (Many climate activist groups backed him, including 350.org.)

None of this worked, and the activists who backed Perriello will have to ask themselves some tough questions about why before the 2018 primaries roll around. There won’t be simple answers, and of course nothing that happened in one primary is definitive proof about what will or will not happen in the future. Since voters were choosing between two very left leaning candidates—and one had a lot more money and name recognition—maybe there isn’t a grand ideological conclusion. But those shortcomings will still need to be addressed.

Perriello had to lend his campaign $150,000 in the final stretch, and was outspent 3 to 1 on the airwaves. Our Revolution, led by former Sanders staffers, didn’t raise money for Perriello until the last week of the campaign. Grassroots donors through the PCCC contributed around $45,000, total. Insurgent candidates are going to need a lot more than that to compete with party machines.

Insurgent candidates also need a way to solve the problem of name recognition. When I observed Perriello canvassing in Norfolk in late April, literally nobody knew who he was. It’s going to be hard for insurgent candidates to get voters to pull the lever for someone they’re not familiar with, instead of a known quantity, and will need more innovative ways to get attention, particularly in relatively low-wattage primary contests. (Perriello certainly would have been better served getting in the primary earlier; he had only months to put a campaign together and get recognized. He did say that Trump’s victory is what inspired him to run.)

In the final analysis, the Virginia results are mainly terrible for Republicans. Democrats increased turnout over the last primary by 130 percent, and Democratic turnout was close to 60 percent, versus 40 percent on the Republican side, where Corey Stewart ran an offensive campaign based heavily on Confederate nostalgia and almost knocked off former RNC chair Ed Gillespie for the nomination. This is all while Democrats chose between two very liberal nominees who bashed Trump at every turn: almost every Northam campaign ad featured him calling Trump a “narcissistic maniac,” which was his stock line on the trail as well. Perriello often said Trump “ran the most viciously racist campaign of my lifetime.” Northam is very likely to become governor in November—and thanks in part to Perriello, he will be a very progressive one.