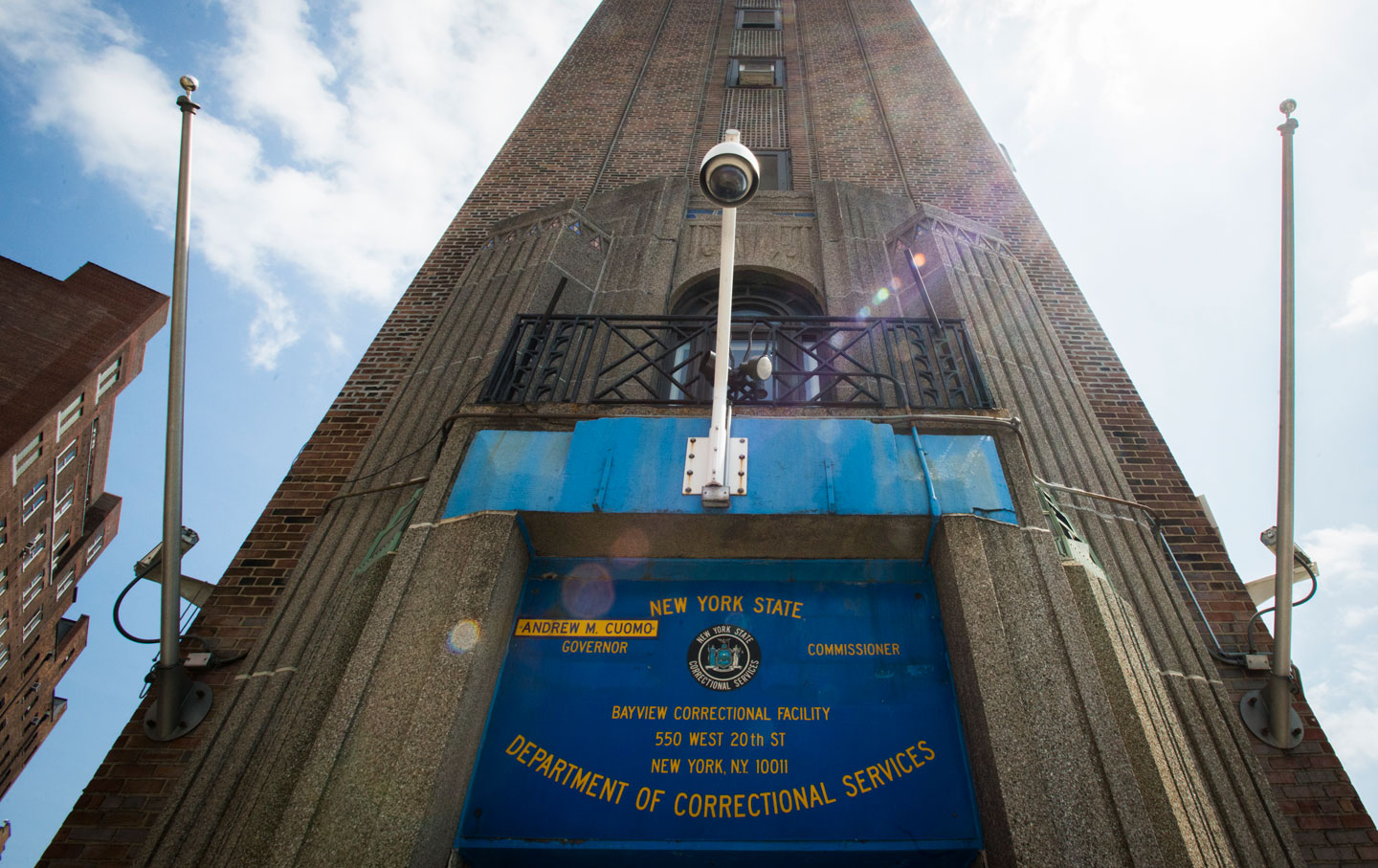 The small cell on the seventh floor of the Bayview Correctional Facility, the former women’s prison on the far-west side of Manhattan, hasn’t been occupied in years, but the window remains covered with a crosshatching of stiff metal, as if still determined to prevent breakouts.

“Day in, day out, you [would] look out the window and see life go by,” recalled Suki, a woman with a warm smile that reaches all the way to her mascaraed eyes, who asked to be identified by her first name only. The smile disappeared a few times as she showed her old cell and other parts of the prison to a small group of strangers and recounted her time inside. Outside, just beyond the window, Chelsea Piers, a 28-acre sports-and-entertainment complex, sprawled toward the Hudson River.

“You [would] see tour buses go by and they would look up and wave because the tour guide would tell them this was a correctional facility. We would wave and yell back.” That window, Suki remembered, was her lifeline to the outside world.

Suki, now in her 50s, spent the last third of her nine-year incarceration at Bayview in that cell. When she finally walked out the front door onto Eleventh Avenue in August 2006, she had no desire ever to go back. But nearly 11 years later, on a freezing January morning, she returned to the former prison, this time to help celebrate the transformation of the building, which had once caged her and hundreds of other women, into a Women’s Building, which will be a hub for women’s organizing and advocacy.

Suki was among three formerly incarcerated women who had agreed to lead a film crew and several advocates up and down the building’s eight floors as they remembered their days of confinement. Later that afternoon, some 200 people, including feminist icon Gloria Steinem, gathered in what used to be the prison’s gymnasium to commemorate a transformation that few of the building’s old residents ever could have imagined. It’s the first time that New York City will have a dedicated Women’s Building, and the first time that such a building will emerge from a former women’s prison.

The Women’s Building is the dream child of the NoVo Foundation, a private foundation supporting efforts to end violence against women and girls. In 2013, nearly three years after Hurricane Sandy flooded the prison, New York State granted the foundation a 99-year-lease to the building, and NoVo has been working since then with the women’s real estate development company the Goren Group to redevelop the former prison.

As an essential part of the transition, the NoVo Foundation has partnered with the Women and Justice Project, a nonprofit that centers the leadership of currently and formerly incarcerated women to end mass incarceration. They came together to ensure that women who have been imprisoned, both at Bayview and elsewhere, are integral to the planning process. Thus, formerly incarcerated women are involved in focus groups to plan the building and interviews to choose the architect. And they played a critical role in preparations for the Women and Justice Project’s event celebrating not only the building’s transformation but also the resistance and resilience of women incarcerated across the country.

But it’s also a part of reshaping the women’s movement itself. “When you’re thinking about feminism, incarceration and incarcerated women usually don’t come to mind,” Benton said. “But feminism is about creating a world where women and people have justice and can reach their full potential. You can never achieve that kind of goal without dismantling mass incarceration and criminalization. Those pieces are critical feminist issues.”

“This building, a building that’s going to be a home for the women’s movement, is including mass incarceration as a central issue and formerly incarcerated women as central leaders,” she continued. “It can become a beacon as to how the larger women’s movement can do the same and become even more powerful.”

But first, the building’s new residents need to acknowledge—and then banish—some ghosts.

For nearly 40 years, Bayview was a medium-security prison where the women occupying its 229 beds were subjected to a daily dose of dehumanization. In 2010, it had the nation’s highest rate of staff sexual assaults. It was also criticized for its dirty and cramped facilities for gynecological care, and a degrading requirement that women requesting additional sanitary napkins bring their used pads to medical staff. In one case, a 23-year-old pregnant woman was placed in keeplock, a section of the prison where women were punished by being locked into their cells 23 to 24 hours each day, for weeks, even after telling prison staff about her pregnancy. Though she received medical attention, for weeks staff failed to diagnose an ectopic pregnancy, a life-threatening condition in which a fertilized egg implants in the fallopian tubes. Left untreated, the fallopian tube can rupture and cause internal bleeding.

Even without medical emergencies, being locked inside a small cell, no larger than many New York City bathrooms, was often terrifying for the women incarcerated in Bayview. For Aggie, who spent two years in the prison before being evacuated during Hurricane Sandy, the terror of being locked in all day was compounded by the fact that she had done nothing to merit such punishment.

“Occasionally, they do random urine tests,” Aggie explained. On one occasion, she and three other women were tested for drugs. Four days later, she was sitting in the rec room when an officer ordered her to turn over her room key and prison ID. She and the three women were moved to the keeplock unit. “I was hysterical,” she remembered. Initially, she was placed in a cell in the building’s rear where, she said, “there was barely a mattress” and nothing to see out the window. She was eventually moved to a window facing the street, but still allowed only one hour out of her cell; that hour was spent in a cage on a roof extension by herself. Officers told her that she would be transferred to Albion, the prison 48 miles from the Canadian border, where she would be placed in the Special Housing Unit (SHU), i.e., solitary confinement.

Aggie spent four days in keeplock until she and the other women were tested again. “It turned out they’d made a mistake,” she said. “The calibration was off when they did the initial test.” She was returned to her room the following morning. No one ever acknowledged the mistake, let alone apologized for locking her in isolation. And the horrors of confinement don’t evaporate once a woman walks out of the prison for the last time. Even as a free woman, Aggie said that she felt a sense of trepidation when she entered the prison.

Drea, who spent three years at Bayview, feels the same. During her incarceration, her mother, suffering from cancer, needed to travel with an oxygen tank and a metal cane. Twice, when she and Drea’s 15-year-old son tried to visit, the officers denied her visit. Because of his age, her son could not visit his mother alone.

“As I walk through, I still see the prison,” she said that January morning. “I still get flashes of when I was incarcerated. I can’t wait until they gut it.”

What happened to many of the women inside Bayview is far from exceptional; instead, they’re symptomatic of what happens in women’s prisons across the country. As director of the Women in Prison Project at the Correctional Association of New York, a prison-monitoring organization, Tamar Kraft-Stolar investigated these conditions at Bayview and other women’s prisons across the state. Now the co-director of the Women and Justice Project, she welcomes the opportunity to “recognize and banish that brutality.”

Kraft-Stolar also sees the building, particularly during the next four years, as a space that “can be a place of resistance against and a place of sanctuary from what we’re all facing and, most importantly, from what those most targeted are facing.”

This vision of the Women’s Building as a haven for solidarity and movement-building in a dark time is crucial for the NoVo Foundation as well. “With women’s and girls’ rights organizations and social justice organizations more generally facing increased threats, fear and intimidation, it’s more important than ever that there’s a space for women’s and girls’ rights organizations to come together and collaborate and strategize for long-term transformative social change,” Pamela Shifman, the executive director of the NoVo Foundation, told The Nation.

All of the women in attendance—those who had been confined at Bayview and those who had never before entered the building—agree. They’re eager to create a building that works against violence against women and provides resources to help keep others from similar experiences.

Aggie said that, had there been a women’s building earlier in her life, she might not have spent six years in prison. “If I had had that before I started stealing money, I would have gotten the strength to not have to buy people’s love. That’s ultimately what I did.” Looking forward, she said, “I’ll do anything for women to not go to prison.”

Looking back on her own history, Suki reflected, “It means so much for me to be part of this and be part of the solution.” She’s excited about the future Women’s Building, particularly as a site of resistance in the coming years. “This is going to be a building where women can come together and fight together,” she said. “If we come together as a whole, we can fight these issues. This building will be where it all starts.”