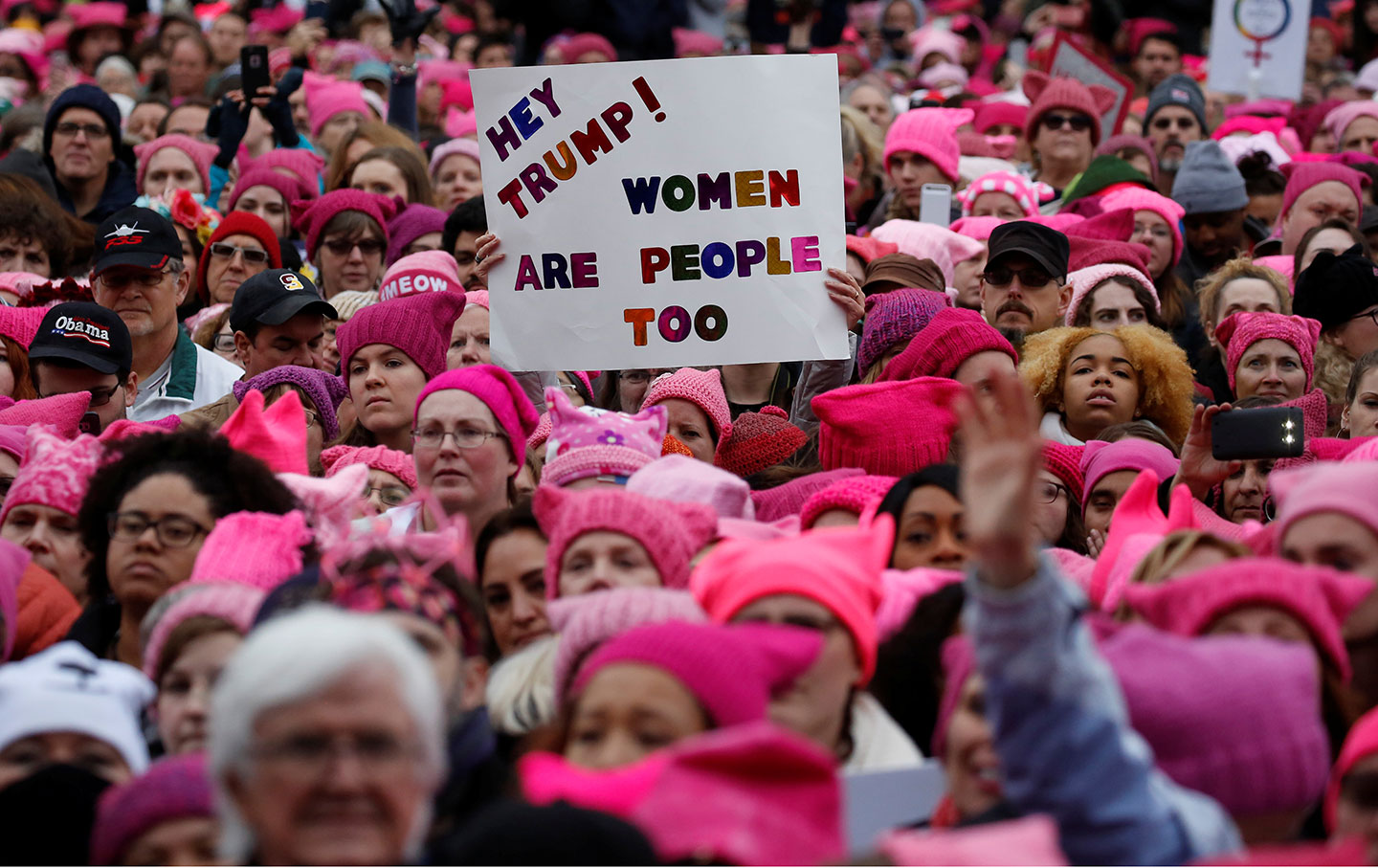 I was so wrong about the pussy hats. When I first heard that crafty women were knitting them by the thousands I thought, What a colossal waste of time, energy, and money—and besides, pink? Please. Cute and adorable is the last thing women need to be in Trump’s America. But the first person I saw when I got off the train in Union Station the day before the march was a large white-haired woman, festively layered in many shades of pink topped with a vividly striped pussy hat, who had planted herself on the platform and was greeting everyone with “Aloha” because “it means both hello and goodbye.” She filled me with cheer, as did seeing groups of pink-hatted women in the train station, at the feminist teach-in at Politics and Prose bookstore, and around Washington well into the evening. By the time my daughter and I set out for the march the next morning we couldn’t wait to have our very own, so thank you, Heather from Pittsburgh, who gave us two made by her friend Andrea, who couldn’t come to the march but wanted to be there in spirit. I am wearing my pussy hat even as I type these words. I may wear it every day that Trump is president.

The lesson I take from this experience: Don’t be so quick to carp and reject. It’s a big world. Other people may have some good ideas from time to time!

Speaking of carping, did you notice how negative the press coverage was in the run up to the big day? So many articles about quarrels and dissension (catfight!), so many predictions of failure, so many thumbsuckers about what was feminism, anyway. Even after the triumph of the actual day—at least 3.5 million around the country, perhaps the largest demonstration in US history —the note of skepticism had to be sounded. In The Atlantic, Julia Ioffe saw similarities between the march and pro-democracy demonstrations in Moscow that had backfired by making Putin clamp down on dissent. The morning after the march, The New York Times ran a front-page story from Niles, Michigan, where the women stayed firmly in their place (“‘I don’t think my husband would support me going,’ said Stephanie Palmisano, 26, a medical worker who supported Hillary Clinton but whose husband voted for President Trump”). And many of the “men on the street” the Times interviewed were, well, men: The Times checked in with Montclair, New Jersey, and found men exhausted by the struggle of caring for their own children alone while their wives marched. (“After his dutiful Saturday, Mr. Coyle went off to play tennis on Sunday morning. It was part of the deal he had struck with his wife.” Because marching for justice and equality against our raving nutter president is sort of like getting a mani-pedi with the girls.) Thanks for sharing that, NYT!

Of course there were bound to be stumbles and blips in what was surely an intense, semi-chaotic process. (You try putting together a mass march—or as it turned out some 500 mass marches around the globe—in 11 weeks!) There was ample coverage of the brief appearance of anti-abortion groups on the list of march sponsors, much of it edged with criticism of feminism as narrow-minded and non-inclusive. Because maybe a march dedicated to reproductive rights and co-funded by NARAL Pro-Choice America and Planned Parenthood should welcome as official sponsors groups that think birth control is evil, Planned Parenthood should be shut down, and abortion providers should go to prison! The brief disappearance of the platform’s support for “full solidarity with the sex workers’ rights movement” was also duly noted. So was the failure of the organizers to acknowledge Hillary Clinton in any way or to respond meaningfully to calls for her name to be added to the rather arbitrary list of honorees, which was indeed strange given that it was rage over her Electoral College loss and its implications for all women that sparked the whole shebang.

Despite her absence from the official materials, Hillary was all over the march, “the unseen presence,” as young Chloe from Brooklyn put it. She was referenced in handmade signs: “I’m With Her” (lots of these), “Don’t Blame Me, I √oted for the Blonde With Brains,” “When They Go Low, We Go High,” “Hillary Won,” “Stronger Together.” “Nasty Woman” buttons were ubiquitous as were chants of “Love trumps hate,” a Hillary slogan.

Now people are talking of a “pussy-hat movement.” I’m not sure we know yet what that would be, but if it means creative, energetic, grassroots progressive politics with a feminist and anti-racist lens, let’s bring it on. Maybe the Pussy Hat Movement can even draw together the supporters of Bernie and Hillary, currently waging guerrilla war on Twitter even as the far right obliterates everything both sides care about.

The success of the marches should put to rest the critique of “identity politics” as a divisive dead end, although it probably won’t. Because for some the most important question was naturally, what about men? Swooping down at the last minute, after all the work was done, came New York magazine’s Jonathan Chait, who feared that calling it a women’s march left men feeling uninvited. Never mind that women constantly have to write themselves into language that does not specifically mention them—the Constitution, for example—and imagine themselves into stories written by men about men. It was a women’s march because that’s what the women who got the idea on the very night of the election called for, and that’s what the thousands of people who immediately bought train and plane tickets signed up for. The United White Male Pundits of America could have called for a genderless “March Against Trump,” and spent eleven weeks knocking themselves out to make it happen. There are certainly enough of them! But they didn’t. It’s like the story of the little red hen who gets no help to sow the seed and reap the grain and mix the dough to make her loaf of bread, but when it’s finally baked and smelling delicious, all the other animals want a slice. (Is it an accident that that modest, determined, and industrious fowl was female?)

My own belief is that calling it a women’s march attracted far more people than it repelled, because it appealed to a deep sense of outrage and injury felt by women that went deeper than Trump’s policy positions. That the least qualified man, a self-confessed harasser and molester to boot, beat the most qualified woman, despite getting fewer votes, told women that no matter how hard they tried and how excellent they were, they were always going to be second-class citizens, always going to be passed over in favor of men, and that disrespecting, insulting, and even assaulting them was perfectly okay in 21st-century America. The shock of that recognition awakened something profound in women, including many who had not been active in politics before. There were a lot of newbies at the march. As one sign put it, “Hell Hath No Fury Like Millions of Women Scorned.” In any case, as Chait seems not to have bothered to discover, people of all genders, including men, were invited to march from the very beginning, although word seems not to have trickled down to Montclair, New Jersey. I’m delighted to say there were lots and lots of men in the crowd.

Some of them were even wearing pussy hats.