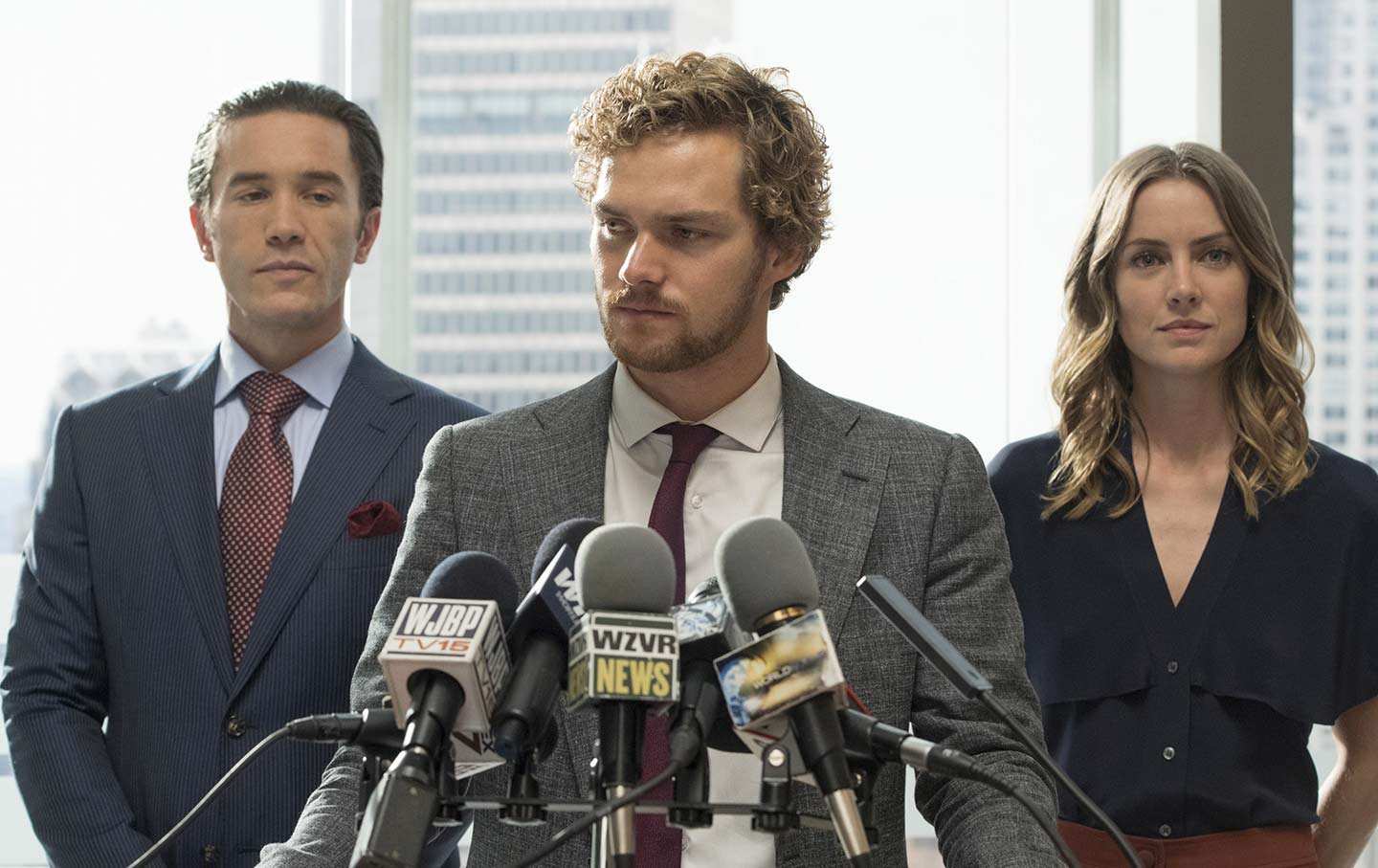 In Netflix’s new Iron Fist, based on the Marvel comic-book series, hero Danny Rand—the Iron Fist, the latest in a long line of martial-arts warriors—only occasionally uses his superpower: the ability to concentrate his chi into a stupendous knockout punch. But as is often the case, especially in the Marvel universe, Danny’s extraordinary gift is also a burden: Throughout the season, which premiered in March, his superpower is something that he seems at times to fight against (consciously or otherwise).

Iron Fist is the most recent addition to Netflix’s roster of Marvel series, and it’s the fourth and last before the premiere of The Defenders this summer. The Defenders will unite all of the previous series’ heroes—Daredevil, Jessica Jones, Luke Cage, and Iron Fist—into what you might call the New York City union local for the Avengers.

When we first meet Danny (played by Finn Jones, a casting decision that has not been without controversy), he’s dressed like he might be a surfer dude wandering the beaches of Southern California—except that he’s walking through midtown Manhattan, barefoot and listening to OutKast’s “So Fresh, So Clean” on an early-generation iPod.

Danny’s come on a mission to reinstall himself as the rightful heir to Rand Enterprises, an ambiguously defined multinational corporation founded by his father, Wendell Rand (David Furr), and Wendell’s business partner, Harold Meachum (David Wenham). We see flashbacks of the plane crash in the Himalayas that killed Danny’s parents and forever changed his life. His mother is sucked out of the crumbling jet in midair as she reaches for young Danny; his father tells him that he loves him just before impact. A group of monks finds Danny, nearly dead, at the crash site and takes him to their mystical priory, K’un-Lun.

Back in New York many years later, Danny gets in touch with his former childhood friends Ward and Joy Meachum (Tom Pelphrey and Jessica Stroup), who now run Rand Enterprises since their father’s apparent death, and spends a few episodes trying unsuccessfully to convince them that he really is who he says he is. The Meachums even go so far as to have him committed to a psychiatric hospital. It is there, in episode two, that we finally get a glimpse of the Iron Fist in action. Ward sets up Danny to be beaten to death in the hospital, and just as it looks like he’s about to receive the fatal blow, a yellow glow begins to emanate through his straitjacket. Danny bursts free of his restraints and subdues his attackers, then punches out a steel door (and the wall around it), enabling him to escape. We’ve seen Danny engage in fisticuffs before, but this is the first time we’ve witnessed his glowing wrecking ball of a power punch, and it’s clear by Danny’s reaction that he’s as surprised by it as we’re supposed to be.

Luke Cage Is Not for Hire

Danny’s next move is to hire a lawyer, Jeri “J-Money” Hogarth (Carrie-Anne Moss), to help him reclaim his birthright. But it seems there’s no way to prove his identity—despite being from a billionaire family, Danny somehow has no medical or genetic records available. The one exception is a childhood X-ray of his broken arm, taken after a skateboarding accident. But Ward—out of jealousy, avarice, or both—sends another minion to burn the records just as Danny arrives. Kung fu ensues, but, alas, Danny’s too late.

Ultimately, it is Joy who realizes Danny’s true identity, after he sends her a bag of M&Ms without any of the brown ones, a childhood ritual that only he would know. She turns over a handmade clay bowl that Danny once gave her to Hogarth, because it still has one of his fingerprints. The Rand board of directors must now accept Danny and his place in the company as the majority shareholder with 51 percent ownership.

By this point, we’ve also met Colleen Wing (Jessica Henwick), a young woman who runs a dojo that serves at-risk kids. Danny meets her in a park while she’s hanging up flyers and begins speaking to her in Mandarin. Colleen responds in kind, but only to tell him that she hasn’t spoken the language in many years and prefers to speak in Japanese or English. Later, when Danny shows up at her dojo uninvited, he can’t help but criticize her business; he even offers to teach a class on kung fu that he thinks would attract more students.

Interestingly, Colleen has the most grounded and complete arc of any of the major characters in the series. In her early interactions with Danny, she’s insightful in the way that she spots his weaknesses. As perhaps only a romantic pursuit can reveal, Danny’s performances of manliness and bravado just barely conceal his insecurities, naïveté, and indignation when other people attempt to challenge or correct his preconceived notions about the world.

And that’s about as far as we can go without the customary spoiler alert, so if you’re planning to watch the series, you may want to stop reading here.

Later, Colleen becomes the focus of one of the season’s inevitable twists. It doesn’t give much away to say that she’s eventually revealed to be a member of the Hand, sworn enemy of the Iron Fist. We know from Danny that the sole purpose of the Iron Fist is to protect K’un-Lun from the Hand, but we’re never told why the Hand would want to attack the monks in the first place.

For those who have watched Netflix’s Daredevil series, the Hand won’t be a new foe, but familiarity with the group is a hefty assumption for Iron Fist‘s show-runners to make. The Marvel cinematic universe has always been tightly interwoven, but in a way that doesn’t require viewers to have seen everything else before; subtle nods to other series and films make the audience want to be included, but they aren’t crucial to the plot. Iron Fist fails this tradition: While it’s clear that the Hand are the series’ bad guys, the viciousness and weight of their villainy is unknown except to those who have seen Daredevil or are familiar with the comic books.

In episode nine, Danny’s friend from K’un-Lun, Davos (Sacha Dhawan), shows up to help combat the Hand. Davos has been mentioned by Danny often enough that’s it no surprise when he appears, but unfortunately for Danny, his aid comes with a prickly attitude and eventual betrayal. At one point, Davos frankly states: “Wow—you are the worst Iron Fist ever.”

And Davos may be right, albeit in unintended ways. Much controversy surrounded the casting of Finn Jones as Danny; many critics argued that an actor of Asian descent should have been given the role. (Lewis Tan, among others, read for it but was ultimately cast as the villain Zhou Cheng in episode eight.) But even if Netflix had landed the next Bruce Lee for the part, it would have done little to save this ham-handed Iron Fist.