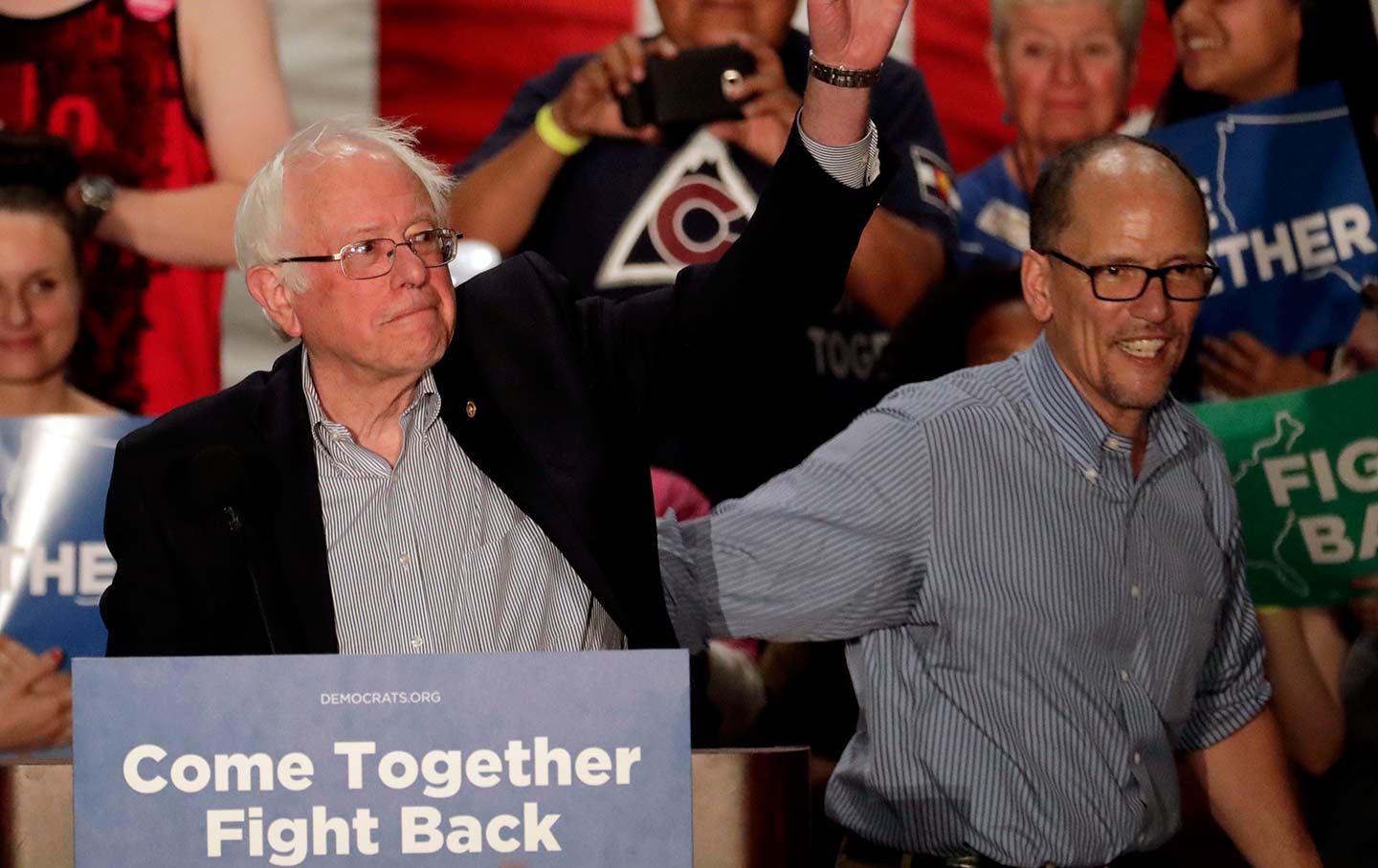 The Democratic National Committee’s Unity Tour is over, and the reviews are in: Most journalists panned it. “At a ‘Unity’ Stop in Nebraska, Democrats find anything but,” wrote The New York Times. “Is Dem unity tour tearing the party apart? asked MSNBC’s AMJoy. Vice didn’t even bother with the question mark, proclaiming: “The Democrats are falling apart on their ‘come together’ tour.” 1

Journalists treated the “unity tour” as a spectacle meant to spotlight party unity. It was anything but—yet it was necessary. DNC chair Tom Perez and Senator Bernie Sanders don’t see eye to eye on many policy disputes. Sanders had, of course, backed Rep. Keith Ellison for the job that went to Perez, and depicted the former labor secretary as a stalking horse for the Barack Obama/Hillary Clinton wing of the party. More than once on the tour, Perez was booed by Sanders backers. The Sanders and DNC folks don’t seem to have collaborated enough on screening the candidates the tour traveled to support. There was a huge dustup around the issue of choice, for example, as well as a skirmish over a promising Democrat seemingly rebuffed by Sanders as not sufficiently progressive.2

Why Was Heath Mello Thrown Under the Bus?

But these are real intra-party conflicts, and the debate they’ve inspired (as well as the compromises and clarifications of each faction’s positions) have been necessary. This Unity Tour launched deliberately and self-consciously in search of greater concord, within a party still rent by the fierce primary battle between Sanders and Clinton.3

The embers smolder on social media, and controversies can reignite them into firestorms. Almost a year after he was mathematically eliminated by Clinton, Sanders voters still feel like their man could have beaten Trump, if the DNC hadn’t had a thumb on the scales. Clinton voters believe her victory was hobbled not merely by James Comey and Russian hacking, but by “Bernie or Bust” voters who Sanders helped create by treating the former secretary of state as a creature of Wall Street and the 1 percent.4

There are genuine gulfs in ideology as well as political strategy. On one side, Sanders and many supporters want to see Democrats fight to win back working-class white voters who’ve abandoned the party. “I come from the white working class, and I am deeply humiliated that the Democratic Party cannot talk to the people where I came from,” he sternly intoned a week after the election. A few days later he added in a speech: “One of the struggles that you’re going to be seeing in the Democratic Party is whether we go beyond identity politics.” Naturally, the party’s existing base, overwhelmingly female and multiracial, don’t like seeing their issues derided as “identity politics” and shunned as distractions, lifestyle questions, or political correctness run amok, while the troubles of white downscale men are centered.5

A Unity Tour was bound to roll into that pothole, and it did almost immediately when it headed to Omaha to support a former state senator running for mayor, Heath Mello. Mello’s feisty economic populism caught the eye of Sanders’s supporters; what they didn’t necessarily see right away (by the accounts of some people close to the process) is that he had a history of anti-abortion votes back in the state legislature, including support for a 20-week abortion bill and one that mandated telling women they had the right to see an ultrasound of the fetus before an abortion. (Mello supporter and Nebraska Democratic Chair Jane Kleeb says the bill was a compromise to prevent a worse bill—one that required women to watch the ultrasound—from becoming law). When reproductive rights groups (rightly) howled, Sanders dug in his heels and reiterated his own pro-choice stand, but added: “I think you can’t exclude people who disagree with us on this one issue.”6

That sounded funny to a lot of people, though, because Sanders was at the same time doing something comparable, to the most promising politician to rise from the ashes of last November’s defeat: Jon Ossoff, making a real challenge to pick up Health and Human Services Secretary Tom Price’s vacant seat in suburban Atlanta. (Full disclosure: My daughter works as Ossoff’s deputy field director.) Sanders hadn’t endorsed Ossoff or even commented on him, but on Election Day the Vermont socialist told a Wall Street Journal reporter, “I don’t know,” when asked if the young Democrat was a progressive. “Some Democrats are progressive, and some Democrats are not,” he stated. That night, Ossoff finished first in a 16-candidate primary, to face the woman who helped inspire the revitalization of the pro-choice movement: Karen Handel, who decided that breast-cancer behemoth Susan B. Komen Foundation should stop supporting Planned Parenthood’s provision of breast-cancer services. She’s been running for office unsuccessfully ever since. It seemed an odd time for Sanders to throw shade at Ossoff’s progressive bona fides.7

To be fair, Ossoff isn’t as progressive as Sanders would like. He made a good-government, anti-gridlock pitch to his suburban district; for the left, his worst move to that point was to criticize wasteful government spending in one of his ads. But a Berniecrat is unlikely to win the moderate suburban seat held by Tom Price. In Omaha, Sanders seemed to tell women and pro-choice advocates to just suck it up; in the Georgia Sixth District race, he didn’t seem fired up to defeat Karen Handel. “It tells your most active political base that we’re just negotiable political property,” NARAL Pro-Choice America’s leader Ilyse Hogue told The New York Times.8

So everyone hit their battle stations, a bad look for a so-called Unity Tour. And then people tried to come together again. Perez issued a statement clarifying his and the DNC’s fervent support for choice. And Sanders endorsed Ossoff, though he refused to call him a progressive.9

All’s well that ends well? Not necessarily. These issues are likely to come up repeatedly, because there are real policy divides among these factions, and some things will be hard to compromise on. Sanders is entitled to continue to say that Ossoff isn’t sufficiently progressive, although it prompts a question: Can a mainstream liberal Democrat be powered by a genuinely progressive movement, and should the left see that as worth cheering? In Slate, Michelle Goldberg wrote about the surge of women into the Ossoff campaign: Denied their chance at the first female president, they threw themselves into campaigning for this unlikely toss-up seat. Goldberg writes inspiringly about these women warriors of suburban Atlanta:10

Women lead the local Indivisible chapter. In March, two women formed a women’s group, called Pave It Blue, devoted to running progressive candidates in local races—contests where, in the past, Republicans often ran unopposed. A private, invite-only Facebook group called Liberal Moms of Roswell and Cobb, or LMRC, has swelled to 1,700 members.11

Those new activists deserve respect in their own right, and any Unity Tour that ignores them won’t bring unity.12

On the other hand, Sanders supporters wonder why Ossoff has gotten national Democratic support, while more progressive Democrats in Kansas and Montana have not gotten the same. It’s not fair to paint Ossoff as the creature of the DNC; $7.75 million of the $10 million he’s raised came in small-dollar Act Blue donations, and Daily Kos chipped in another $1 million. Still, Ossoff is attracting some of the same national leaders and celebrities who traveled the country working for Clinton, whom he supported. Berniecrats say they haven’t seen the same generosity.13

But then so far Our Revolution and other groups have been slow to get off the ground to provide meaningful support to the lefty Democrats. The group gave James Thompson, a Berniecrat running to represent Wichita, Kansas, only $900, though members offered more as in-kind contributions. After Thompson’s relatively narrow defeat earlier this month, it makes sense that Tom Perez would want to travel with Bernie to support a heartland progressive in Omaha—though no one had apparently done a deep dive on his entire political history.14

Still, I think it’s progress that these issues are being faced in Donald Trump’s first 100 days, when the Resistance still seems sizable and urgent and people can come together around the necessity of defeating Trump—even as they disagree on tactics as well as policy. None of the Unity Tour stumbles were fatal, a few ended productively, and the party factions will have to keep working to define what “unity” means in the wake of the transformative Sanders-Clinton battle.15