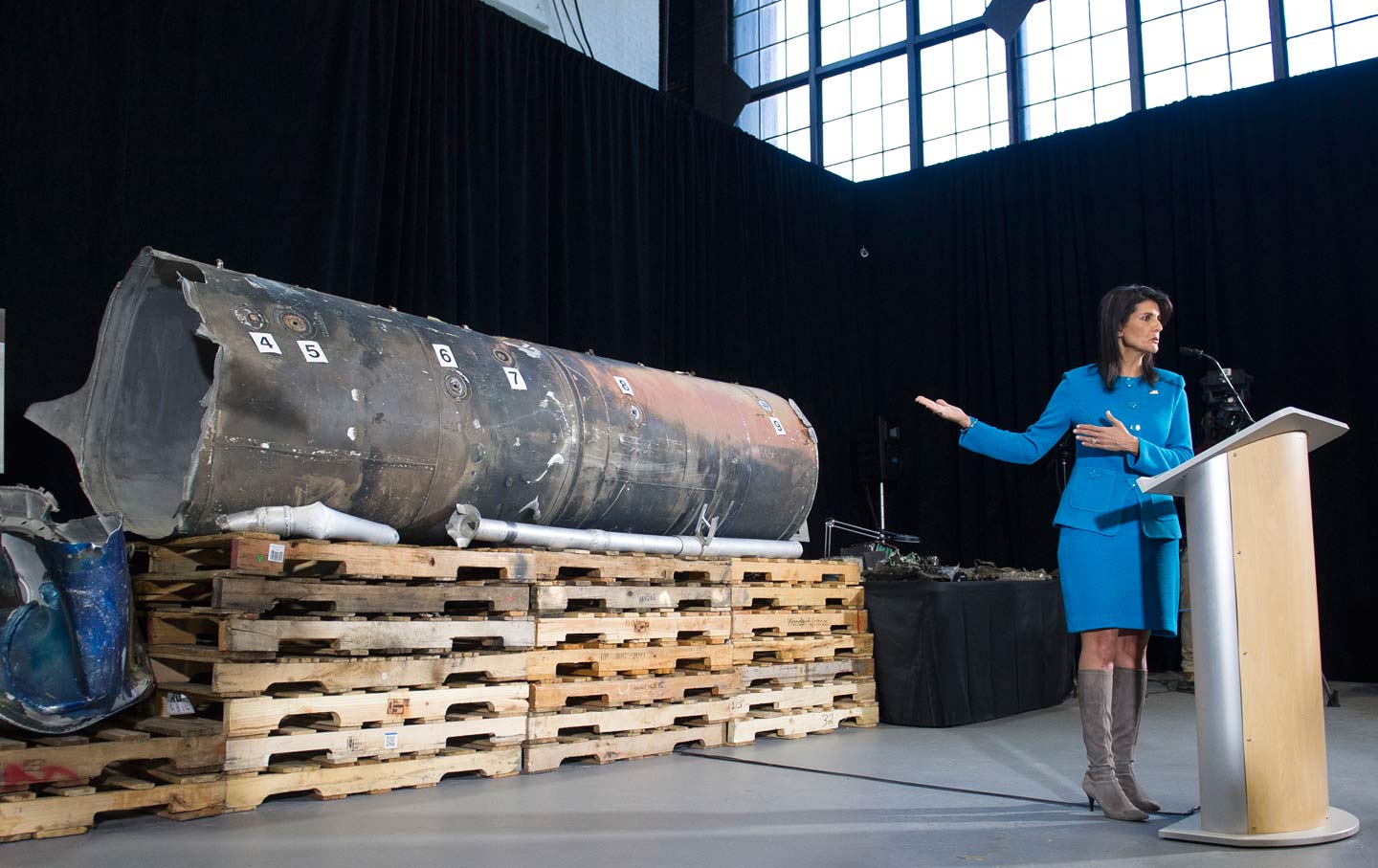 US Ambassador to the UN Nikki Haley gestures as she speaks in front of what she claimed were recovered segments of an Iranian rocket during a press briefing at Joint Base Anacostia-Bolling in Washington, DC, December 14, 2017. (AP / Cliff Owen)

Last Thursday at Joint Base Anacostia-Bolling in Washington, DC, UN Ambassador Nikki Haley stood before what were claimed to be recovered parts and fragments of Iranian missiles that had been fired on Saudi Arabia by Yemen’s Houthi rebels. Haley claimed this was proof that Iran had violated UN Security Council resolution 2231 (the Joint Comprehensive Plan of Action, colloquially known as the P5+1 Iranian nuclear deal), which states, in part, that the parties to the deal “are to take the necessary measures to prevent, except as decided otherwise by the Security Council in advance on a case-by-case basis, the supply, sale, or transfer of arms or related materiel from Iran.” Resolution 2231 also prohibits Iran from supplying or selling weapons capable of delivering a nuclear warhead.

Haley claimed, without providing any proof of where the missiles came from or when they were supplied or by whom they were sold, that a number of the recovered missile parts had been fired by the Iranian-backed Houthi rebels at an airport in Riyadh. Haley said that “this is terrifying, this is absolutely terrifying. Just imagine if this missile had been launched at Dulles Airport or JFK or the airports in Paris, London, or Berlin.”

Haley’s presentation eerily recalls Colin Powell’s 2003 UN speech in which he, relying on falsified and politicized information provided to him by US intelligence agencies, falsely accused Iraq of having a WMD program.

Haley also resembles her immediate predecessor at the UN, Samantha Power, who had a habit of making serial misrepresentations about the Ukrainian, Syrian, and Yemeni crises. Haley has become, as Power was, the embodiment of America’s bipartisan foreign-policy orthodoxy at its most hypocritical.

For all of Haley’s hand-wringing about the war in Yemen, she neglected to mention that it is American “ally” Saudi Arabia (with US tactical support) who is waging a total blockade on Yemeni ports of entry that is resulting in a crisis of mass starvation as well as a cholera epidemic in that country.

The reaction to Haley’s presentation was swift and damning. Dr. Trita Parsi of the National Iranian American Council observed that Haley exhibited “a degree of inaccuracy and deliberate deceit that I think only Nikki Haley, with the exception of Donald Trump, has managed to achieve in the Trump administration.” The advocacy group Diplomacy Works, which includes former secretary of state John Kerry, condemned the speech as “part of a pattern of escalation.”

“With every report the IAEA issues,” the group said in a statement, “it becomes increasingly clear that Iran hawks will not be able to find an Iranian violation of the nuclear deal. So they have resorted to intentionally conflating the Iran nuclear deal with Iran policy writ large.” Former high-ranking CIA official Paul Pillar said Haley “tendentiously and selectively brandished pieces, including physical pieces, of intelligence to stir up hostility toward Iran, with which the Trump administration seems intent on picking a fight.”

That Haley has emerged as one of the administration’s principal hard-liners on Iran is no surprise, given her close ties to the casino mogul and pro-Israel stalwart Sheldon Adelson. As veteran Middle East journalist Jim Lobe has pointed out, “between May and June, 2016, Sheldon Adelson contributed $250,000 to Haley’s 527 political organization, A Great Day, funds that she used to target four Republican state senate rivals in primaries.”

But Haley’s speech is just one part of a larger effort by the administration to increase tensions with Iran while at the same time bringing American Middle East policy even more in line with the wishes of Tel Aviv and Riyadh.

The most recent evidence of the Trump administration’s slavish deference to the wishes of the hard-line Israeli government was its decision to recognize Jerusalem as the capital of Israel and relocate the US Embassy there from Tel Aviv.

This, predictably, sparked a chorus of protest from Muslim-majority nations in the region, as well as a round of street protests in Israel and Palestine. But Haley, to no one’s surprise, was all-in, telling Fox News: “Obviously, I believe that the capital should be Jerusalem and the embassy should be moved to Jerusalem because…all their government is in Jerusalem.”

In her profound ignorance of the world, and the ease with which she lies, Haley must be ranked as one of the most dangerous members of the current administration, perhaps second only to the president himself.