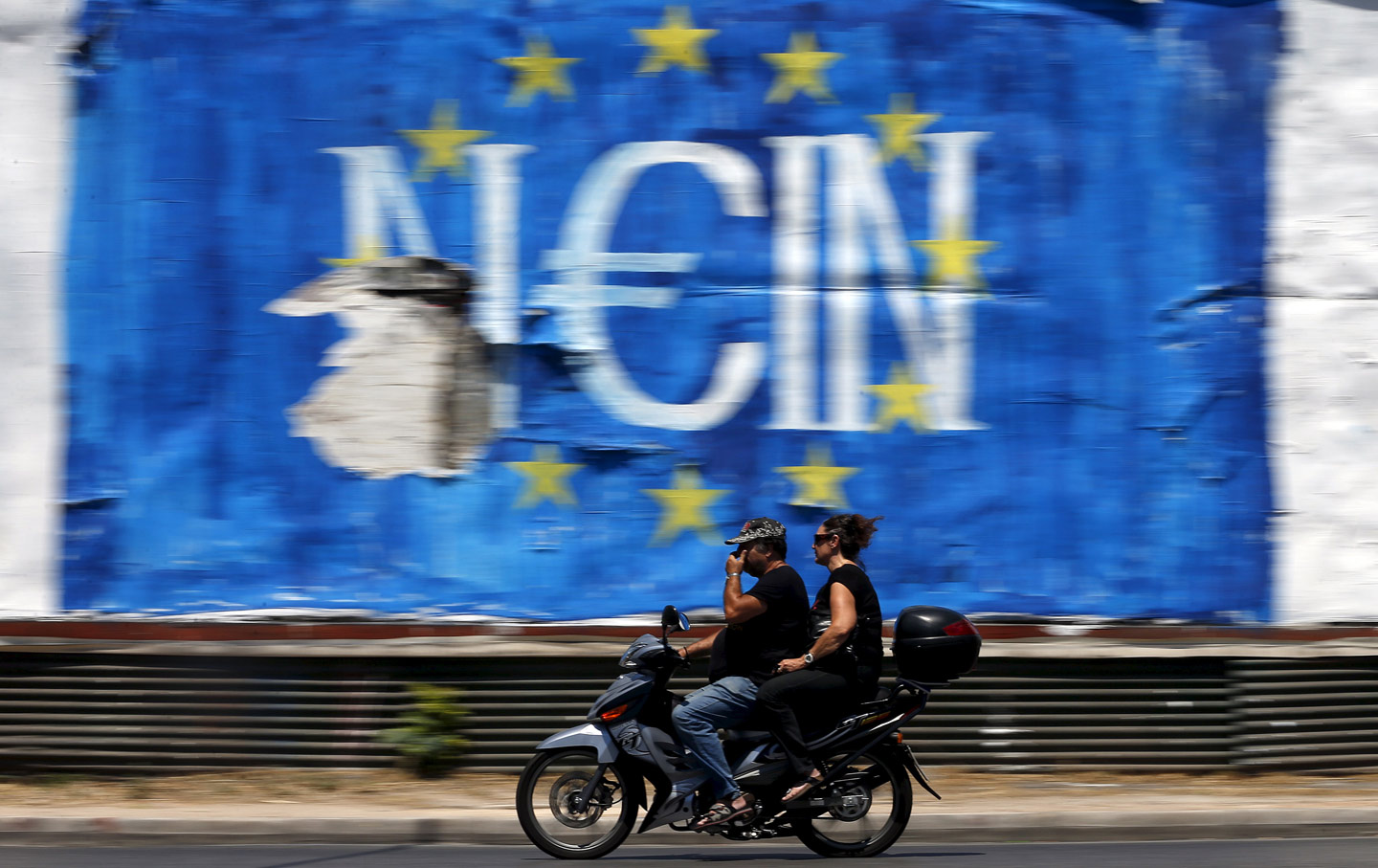 For weeks, the Syriza government has been flailing like a bird in a cage, trying to find a way out of an impossible situation. After months of negotiation, on the verge of bankruptcy, presented with a set of measures that couldn’t be put to the Greek Parliament without splitting his party, Tsipras put the creditors’ offer to the voters in a referendum. Some say that he hoped for a “yes” vote to get himself off the hook—but Tsipras and his government campaigned vociferously for “no.” “No” won by a small landslide: 61.3 percent.

Less than a week later, with the banks closed, imports frozen, and the economy in free fall, a proposal very close to the one the voters had rejected was pushed through Parliament. Tsipras made a speech that sounded like surrender, passing the baton on to other parties (read Sinn Fein in Ireland and Podemos in Spain). We struggled, he said, for the low-paid and for pensioners. We sparked a movement of solidarity in Europe. Surely this struggle won’t have been in vain.

As this issue goes to press, the Greek Parliament is preparing to vote on yet more austerity measures—tougher than anything seen so far—to keep the country in the eurozone. As Greece gives up what remains of its sovereignty, protesters are gathering in Syntagma Square. The new memorandum includes necessary reforms, many of them part of Syriza’s original program. It also crosses the party’s “red lines” on pensions, value-added taxes (VAT), and labor rights, and mandates an impossible privatization program backed by the transfer of 50 billion euros of Greek assets to an independent fund—pawning the family silver pending its final sale, no doubt at knockdown prices.

The program now being imposed on Greece will fail, as surely as its previous incarnations did.

Tsipras succeeded in getting this fund transferred from Luxembourg (famous for helping the wealthy pay their taxes) to Athens, and in earmarking half the proceeds to recapitalize the banks. He got an offer of funding for three years instead of a few months, and (with many caveats) a mention of possible debt relief. Apart from a commitment to mobilize “up to” 35 billion euros for investment, there is little to sweeten this bitter pill.

Germany and its allies had a choice when they drew up the terms of surrender. Greece, though, has no choice but to accept them. Foreign commentators blithely calling for resistance and an exit from the eurozone haven’t fully imagined what that would mean for the Greeks, who have had a taste of it these past days: serious shortages of medicine, fuel, and food; the collapse of what still passes for normality; civil conflict; international isolation. Greece is a tiny country of 11 million souls, its meager and late-blooming industrial production gutted by globalization and mismanagement. As Tsipras put it in a TV interview on Tuesday, the only plan for a Grexit was that of German Finance Minister Wolfgang Schäuble. The government has no plan for leaving the eurozone. Some people say that they’re ready to go, that they’ve got nothing left to lose, but the majority—including those who voted “no”—have no stomach for such adventures.

Or not yet, anyway. The events of the past few days may yet change all of that. It isn’t just the implacable cruelty of the German position, or the vindictive humiliation of an elected government by its eurozone “partners.” To Greeks, none of that comes as a surprise—and judging by the popularity of #ThisIsACoup on the night of the long knives, the rest of the world now sees it too, including the right-wing forces itching to unravel the European project. It’s that the program now being imposed on Greece will fail, as surely as its previous incarnations did.

No one believes in this new deal: not Syriza, not Schäuble, not the IMF, which says it won’t participate unless Greece gets substantial debt relief. The absurdly high VAT rate—23 percent on many goods and services—will continue to crush consumption. Pension cuts will plunge more families into destitution. What lies ahead for Greece in the foreseeable future is existence as a zombie debt colony on a drip feed of life support.

In the early months of the crisis, I met a Bulgarian conjurer in a derelict building in Athens. He survived, like so many migrants, by recycling scrap metal for 17 cents a kilo. He showed me a few card tricks that took my breath away; he claimed he could earn 300 euros performing in restaurants. But he wouldn’t do it, he told me, because of the beggar masters. They take whatever you make, and if you refuse, they can bundle you up and throw you into the sea. And if you don’t make enough money, they might cut off your earlobe to make you work harder next time. It’s fear, you see, he said. Fear makes a man work harder, like an animal.

I’ve often thought since then about that man, who preferred to survive by collecting tin cans rather than live like an animal. But I don’t know what’s happening to him now.