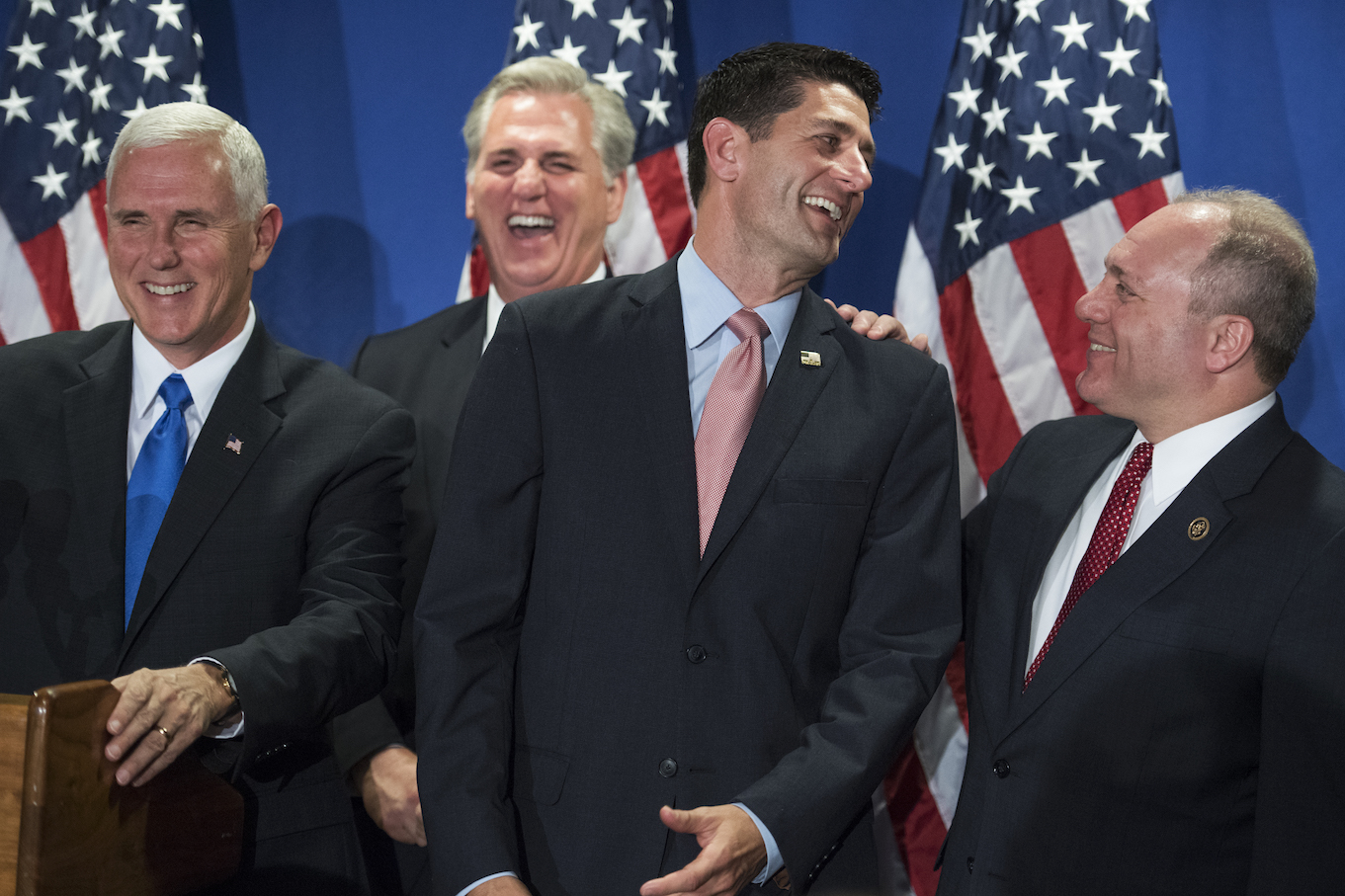 Republicans who for months put up with Donald Trump’s racism, xenophobia, and religious bigotry were finally giving up on their nominee Friday night, after the release of a tape that confirmed Trump’s reputation as a lewd and predatory sexist.

“I’m out,” declared Utah Congressman Jason Chaffetz, the chairman of the House Oversight Committee. “I can no longer in good conscience endorse this person for president. It is some of the most abhorrent and offensive comments that you can possibly imagine.”

Utah Senator Mike Lee, a hero to libertarian-leaning conservatives, went so far as to to tape a video addressed to the nominee, in which Lee said, “Mr. Trump, I respectfully ask you, with all due respect, to step aside. Step down. Allow someone else to carry the banner of these principles.”

Lee was not alone. Illinois Senator Mark Kirk, Colorado Congressman Mike Coffman, and Virginia Congresswoman Barbara Comstock—a trio of Republicans who were already facing reelection challenges—all called on Trump to stand down. They were joined by Rob Engstrom, the national political director of the US Chamber of Commerce, who tweeted late Friday: “Trump should step down immediately tonight, yielding to Governor Pence as the GOP nominee.”

“I can no longer in good conscience endorse this person for president.” —Republican Congressman Jason Chaffetz

They were joined Saturday by the number three Republican in the Senate, South Dakota’s John Thune, who declared that: “Donald Trump should withdraw and Mike Pence should be our nominee effective immediately.”

But Trump is not going anywhere. The candidate told The Wall Street Journal on Saturday that there is “zero chance I’ll quit.” He told The Washington Post, “I’d never withdraw. I’ve never withdrawn in my life. No, I’m not quitting this race. I have tremendous support.”

The out-of-control nominee released a hastily produced video in which he threatened to make things worse for Republicans. “I’ve said some foolish things, but there’s a big difference between the words and actions of other people,” Trump ranted in the midnight statement. “Bill Clinton has actually abused women.… We will discuss this more in the coming days.”

Trump then urged viewers to tune in to Sunday night’s second presidential debate with Hillary Clinton. By mid-day Sunday, the Republican nominee was off the rails: tweeting and re-tweeting rants about rape and “GOP traitors.”

If Trump rejects the advice of his our advisers and seeks to slime his way out of the corner into which his own words and deeds have painted him, strategists from across the political spectrum say he is likely to doom not just his own candidacy but that of down-ballot Republicans in tough races. But, of course, Trump has never seen the Republican Party as anything more than a vehicle for his own ambitions. So he does not care. At issue now is the question of whether key Republican leaders—such as House Speaker Paul Ryan, Senator majority leader Mitch McConnell, and Republican National Committee chair Reince Priebus—care enough to finally reject Trump.

Ryan, McConnell and Priebus have been Trump’s chief enablers throughout a 2016 campaign in which the billionaire has turned the “Party of Lincoln” (or, at the least, the “Party of Reagan”) into the “Party of Trump.” Even as they have moaned about the chaotic candidate’s “textbook” racism and whined about “his seeming ambivalence about David Duke and the KKK,” the top leaders of the party have always signaled that they will back their nominee.

The refusal of Ryan, McConnell and Priebus to say they would not support Trump as the GOP’s fall contender helped to “legitimize” the billionaire during the primaries. And the promises of support that Ryan, McConnell, and Priebus provided in the late spring and early summer assured that Trump would have smooth sailing at the Republican National Convention in Cleveland.

Now, the political Frankensteins who created a party that was ripe for Trump (by condoning extremism, embracing obstruction, and practicing a win-at-any-cost politics), and then cleared the way for Trump’s nomination, are stuck with their monster. They cannot replace him as the GOP nominee unless Trump chooses to step down, and Trump is not so choosing.

So Ryan, McConnell and Priebus must decide whether they will continue to place rank partisanship ahead of anything akin to principle.

It is not enough to object once more to their nominee’s disgusting words and deeds. It is not enough to fantasize about shaking up the ticket and putting Mike Pence—Trump’s chief defender, and a political careerist who has proven himself to be every bit as cynical as his running mate—in the presidential slot.

It is time for Ryan, McConnell, and Priebus to recognize a crisis of their own creation. They need to say what should have been said months ago: that they cannot support as their nominee a man whose latest indiscretions are described by Ryan as “sickening.”

If they cannot echo Jason Chaffetz’s “I’m out!” announcement, if they cannot put principle ahead of partisanship, then they are every bit as destructive to their trashed party, to their conservative movement, and to their country, as is Donald Trump.