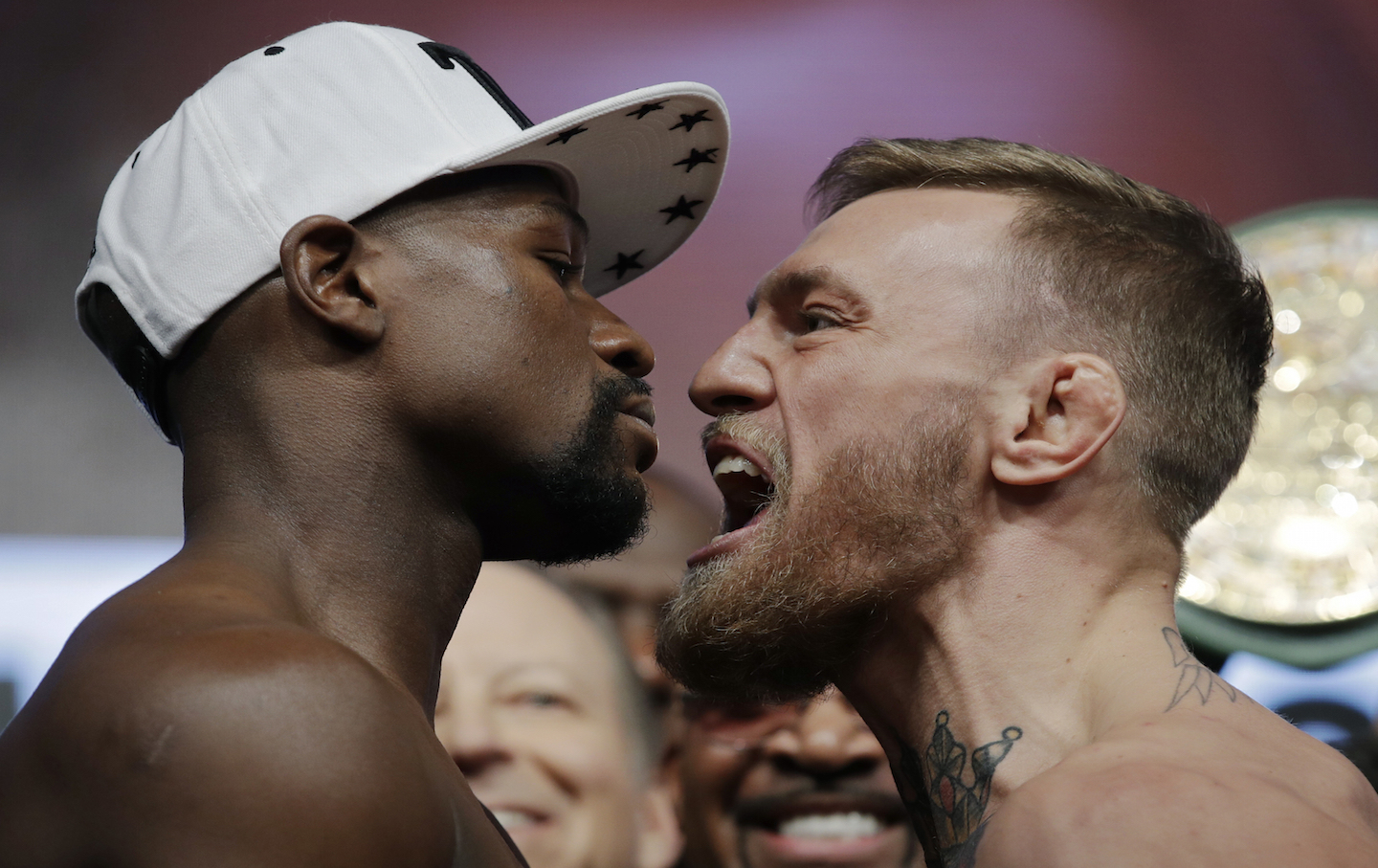 “I’ve got world titles and multimillions of dollars, you’ve got $20,000 to show and you teach kiddies jiu-jitsu.”

“I’m about to knock out a stuffed, fat-ass, skinny Mexican.”

“He’s dressed like a little sheik’s servant…struggling to make a few quid.”

“[He] broke his foot and his vagina in the same day.”

“He’s a quiet little hillbilly from the back arse of nowhere. His cousin is probably named Cletus!”

If Donald Trump, a leprechaun, and John Kreese from The Karate Kid had a love child, the result would be Conor McGregor. The abrasive, politically incorrect Irish nationalist is the most highly paid fighter in the Ultimate Fighting Championship. Saturday night, he will step outside the UFC’s cage and into the boxing ring with undefeated boxing champion Floyd “Money” Mayweather Jr. The pay-per-view bout is expected to shatter box-office records.

While most fans of mixed martial arts and boxing would say that they are against racism, sexism, and homophobia, they still stand poised to avidly support a pair of fighters who are caricatures of bigotry and intolerance. During the promotional tour for the “Money Fight,” McGregor and Mayweather manufactured a highlight reel of Trumpian quotes mixed with Jerry Springer theatrics. Mayweather called McGregor a “faggot” and threw a pile of one-dollar bills in the air, as he demanded that McGregor strip like a “bitch.” McGregor, the self-proclaimed “multicultured individual” who “doesn’t see color,” responded by upping the ante. After berating Mayweather for not knowing how to read, he shouted, “Dance for me, boy!” and then went on to compare the black boxers in Rocky III to dancing monkeys.

When called out by Mayweather for being a racist, McGregor offered an apology out of the Trump handbook. That is, instead of apologizing for his comments, he doubled down. “A lot of media seem to be saying I’m against black people. That’s absolutely fucking ridiculous. Do they not know I’m half black? I’m half black from the bellybutton down.” As if his explanation was insufficient, McGregor proceeded to dry thrust his hips into the air as a “present” for his “beautiful black female fans.”

If McGregor and Mayweather were athletes in the NBA or the MLB, their comments would be a public-relations nightmare. But in the worlds of the UFC and professional boxing, racism has always sold well. When the UFC was founded in 1993, it was originally titled “War of the Worlds.” In the first tournaments, American wrestlers battled with Muay Thai fighters from Asia, jiu-jitsu specialists from South America, and other warriors from different parts of the world to see what style of combat would survive when put to the Darwinian test. Though the tournaments had a cosmopolitan element, they were ripe with ethno-nationalism and “white hope” narratives. This entrenched racism was apparent in the very first match at UFC 1. After he stepped into the cage to fight Samoan sumo wrestler Teila Tuli, Dutch karate fighter Gerard Gordeau gave a “Heil Hitler!” salute to the audience.

This history of racism and combat sports has not declined in recent years. When McGregor fought Mexican-American Nate Diaz in last year’s highest grossing mixed martial arts fight, the UFC spliced McGregor’s racist diatribes into their promotional videos. The Irish man’s taunts about Nate Diaz being poor, stupid, and nothing more than a “little cholo gangster from the hood” were played on repeat in the weeks leading up to the acclaimed bout. Like the white teenage guys who chant “Build the Wall!” at high school sporting events, the UFC’s predominantly male audience has long embraced McGregor’s tongue-lashings. As UFC commentator and spokesman Joe Rogan observes, McGregor is unquestionably the organization’s most popular star.

Mayweather is not any better when it comes to racism. Before his super fight with Filipino boxer Manny Pacquiao, he posted a video where he proclaimed to the world that he planned to stomp that “little yellow chump,” and then “cook that motherfucker with some cats and dogs.” Neither Mayweather’s racist comments, nor a laundry list of guilty charges for domestic violence, could keep him out of the ring. The fight, promoted by the World Boxing Organization, was the highest-grossing event in pay-per-view history. Before his public rebuke of Pacquiao, Mayweather was scoring checks as a performer in Vince McMahon’s World Wrestling Entertainment sideshow—a show that gender, race, and violence scholar Jackson Katz has decried as the most “culturally destructive and blatantly misogynistic” business in the history of popular entertainment. McGregor was recently recruited to perform for the program, which infamously inducted Donald Trump into its Hall of Fame, to show the world that he is “the man.”

Unfortunately, even if McGregor or Mayweather were to post a YouTube instructional video tonight about how to abduct and rape a woman, as former UFC champion and fan favorite Quinton “Rampage” Jackson did, don’t expect Dana White to condemn their behavior. The UFC President, who spoke in support of Donald Trump at the Republican National Convention, denied any claims about racism and homophobia on the part of McGregor and Mayweather. Instead, he blamed the media for blowing things out of proportion and failing to understand that fighting is not a “tennis match.” With his long history of homophobic and sexist videos and tweets, banning journalists from events, not giving title shots to fighters of color, and denying racism in his organization, it is unsurprising that White is delighted to think that McGregor and Mayweather are the most impressive trash talkers in sports history.

Combat sports is not just a hotbed for racism, sexism, and homophobia. It is also fertile soil for economic inequality. Although the “Money Fight” will bring McGregor and Mayweather, as well as White, hundreds of millions of dollars this weekend, the rest of the mixed martial arts and boxing communities will remain underpaid and exploited. Like the labor abuser in chief, White has long been the UFC’s most ardent defense against attempts to form a fighters’ union or increase fighter pay. As a result, the majority of his fighters, especially women, are badly exploited and. In the words of Tim Kennedy, women in the sport would make more money emptying trash cans.

McGregor, who believes there needs to be “something” to protect fighters, has no interest in supporting the most serious attempt to form a union in UFC history. In a recent interview, he chastised the fighters who organized the Mixed Martial Arts Athletes Association as simply being unable to broker the deal that they want. He further elaborated that he must look out for number one. Mayweather, for his part, is most known for being a caricature of selfish exuberance, and the poster boy for a sport where the top 20 fighters take home over 90-percent of the money. Mayweather also shows no interest in any type of collective organization, much less anything resembling action for social change. (He does show an interest in publicly defending Donald Trump.)

At a time when men across the country cheered as Donald Trump entered office on January 20, McGregor and Mayweather are finding it easy to play the roles of fast-talking athletes who care about no one but themselves. Or, like boxer Muhammad Ali—who foreshadowed Mayweather vs. McGregor with his 1970 fight against wrestler Antonio Inoki—they could choose to use their celebrity and verbal dexterity to display a different notion of what it means to be a man. This notion of manhood is characterized by social awareness and a desire to help defend poor people, people of color, gay people, women, and members of other groups who stand to be the biggest victims of Trump’s presidency. Until then, McGregor and Mayweather will continue to be the faces of the combat-sports culture we have, not the culture we need.