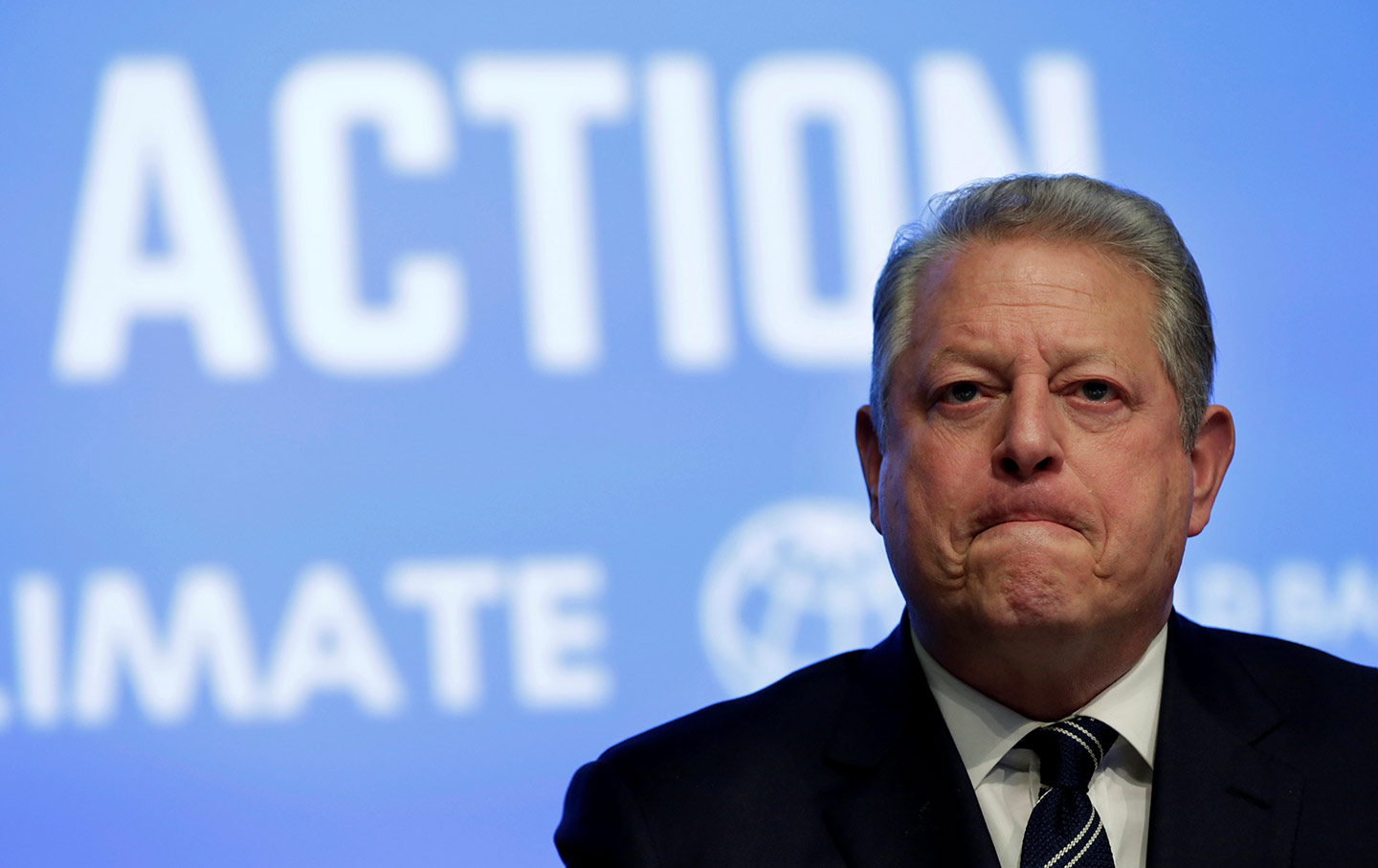 There’s a compelling case to be made that taking on climate change could transform the lives of people still reeling from the fallout of the recession, and respond to both the ecological crisis and the economic pain that drove many to vote for Trump. An Inconvenient Sequel—Al Gore’s latest documentary—never makes that case, opting instead for at-length explanations of glacial ice melts and the sausage-making behind international agreements. As both a film and a political treatise, its biggest problem might be just how much the story revolves around Gore and his outdated view of how politics work.

The 10-years-later follow-up to An Inconvenient Truth treads a lot of the same ground as the original: reflections on the former vice president’s life and political career punctuated by lots of PowerPoint presentations. But now he’s stepped into a new role: diplomat. Not an official one, of course—Gore hasn’t been formally involved in politics since he left the White House. But his exploits as a self-appointed environmental envoy get more screen time in this round than his graphs.

The main action of the film orbits around the Paris climate talks, the landmark UN Framework Convention on Climate Change negotiations held in late 2015. As the main event nears and eventually kicks off, we follow Gore as he jet sets between meetings with everyone from then–Secretary of State John Kerry to members of the Indian government, a primary antagonist. One of the most dramatic scenes in An Inconvenient Sequel shows Gore making an 11th-hour call to then–SolarCity CEO Lyndon Rive, whose company he profiled earlier. In the last days of the conference, Gore is trying to cajole Rive into granting India special financing to expand its renewables capacity, thus making it easier to move off of coal. It works, and the audience is led to believe the exchange convinced a skeptical Modi government to sign on to the agreement.

In this and other moments, the film offers a kind of West Wing theory of climate politics. If you have enough high-level conversations with enough high-rollers, the thinking goes, then eventually they’ll all come around to your way of seeing things, and change will proceed accordingly because our institutions are built to serve the public’s best interest. The most important thing is to have the truth on your side and the ability to muster a good argument.

Perhaps unsurprisingly, the approach mirrors the campaign Hillary Clinton’s team ran last year. Democrats doubled down on showcasing Trump’s vulgarity to try to win, convinced that Americans would come to their senses if only they knew how depraved he really was. Likewise, Gore goes to great pains to point out the obscenity of the climate crisis. Fond of saying in recent press junkets that “every night on the evening news is like a nature hike through the Book of Revelations,” he plays the role of dutiful tour guide through a battery of disasters and sobering statistics.

He’s right about all this, of course: Extreme weather is killing more people every year, and warming forecasts seem to grow more bleak by the day. The simulations he presented us with 10 years ago have come to life.

What’s less clear is whether anyone cares. While a majority of Americans now support some sort of action on climate change, it remains a low-salience issue for voters on both sides of the aisle, getting beat out by concerns about jobs and the economy in each election cycle.

There are deep and unavoidable links between the economy and the climate crisis: The fuel at the heart of the former is driving the latter. And serious climate solutions—from transforming the grid to retrofitting homes—could form the backbone of the biggest jobs program in this country’s history. Unfortunately, Gore doesn’t make much of a connection between the two.

The closest he gets is when he travels to Georgetown, Texas, to visit the Republican mayor of a deeply red small city that’s decided to switch over to running entirely on renewables. Georgetown’s mayor is an accountant who decided to run the numbers on what the switch would mean for the 65,000-person city, only to find that transitioning over to energy sources like solar would both save residents money and insulate them from the fossil-fuel sector’s infamous volatility. But instead of narrowing in on the pocketbook benefits of renewables—that it can make common sense choice for working people—the story of Georgetown ends as a morality play on the importance of bipartisanship.

Gore’s not alone in this. A small cottage industry has emerged in the Trump era of aging and establishment-friendly politicians hoping to forge their legacy on climate change—all of them adamant that investors’ self-interest will make Republicans come to the table. Mike Bloomberg, perhaps the most Wall Street–friendly mayor in New York City history, just coauthored a book on why not all hope is lost for the climate. “Companies are one of the big heroes here,” he told NPR’s Steve Inskeep in April. “What you see is big companies doing things that are good for the world because their customers want it, their employees want it and, most of all, their investors want it.”

Though he’s a longtime friend to the oil industry, California Governor Jerry Brown—now in his last term—took his own trip to talk with Chinese President Xi Jinping about rising tides, leading the Los Angeles Times to dub him “America’s unofficial climate change ambassador.” Weeks later, he backed a climate bill laden with giveaways to fossil-fuel lobbyists, and almost universally opposed by grassroots environmental-justice groups.

That Davos regulars like Gore, Bloomberg, and Brown are casting themselves as the climate fight’s most visible heroes should worry more than just avowed leftists. Anti-establishment sentiments have captured the lions’ share of the energy in each of the country’s ruling parties, and letting 1 percenters define the terms of the climate debate will only affirm climate-denier talking points about how only a privileged few have the luxury of caring about environmental issues.

That Davos regulars like Gore, Bloomberg and Brown are casting themselves as the climate fight’s most visible heroes should worry more than just avowed leftists.

Edited to account for Trump’s June withdrawal from the Paris Agreement, Gore’s theory of change seems to break down even within his own script. Toward the end of the film, his narration enjoins his audience to “speak truth to power” over an image of him stepping into a gold-plated elevator at Trump Tower. The meeting, he’s since admitted, bore no fruit.

Despite the film’s flaws, Gore isn’t a totally unsympathetic character. He admits at one point: “I don’t know any other way to do it.” And the fact that An Inconvenient Sequel feels so out of touch with today’s political moment is in part a testament to the size and scope of the movement Gore helped catalyze a decade ago. Indeed, movements like the opposition to the Keystone XL pipeline and the push for fossil-fuel divestment have had a significant number of foot soldiers who were spurred to action by watching his first film.

Al Gore was instrumental in putting climate change on America’s radar in 2006. More than a decade later, we can be thankful he’s just one of many people now trying to tell the story.