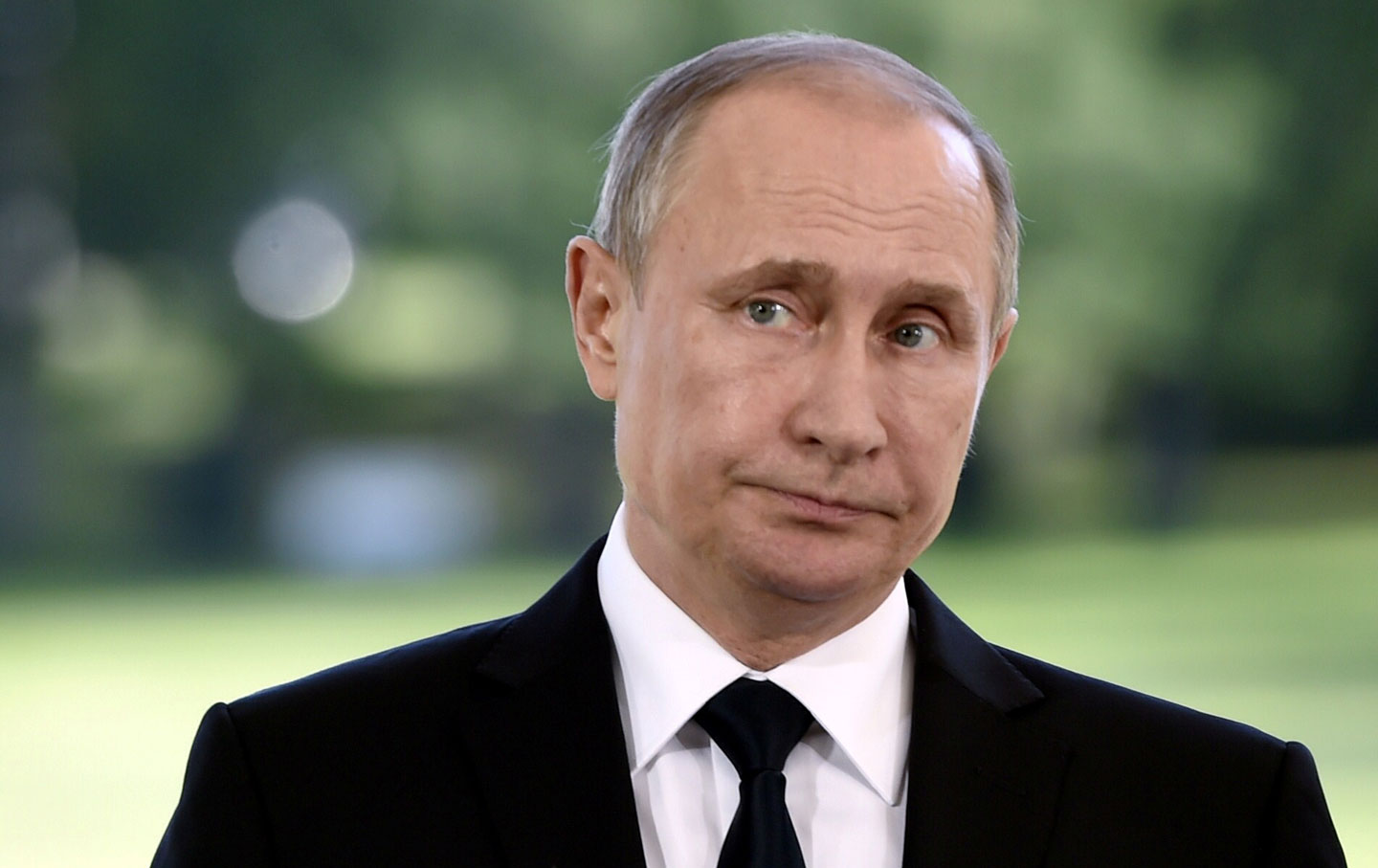 If there is one country in the world that garners media coverage bereft of even the most basic journalistic standards, it is Russia. Over the past month, the Russian government has been accused of hacking the DNC, orchestrating the Brexit, tacitly supporting the candidacy of Donald J. Trump, and much else.

On June 14, The Washington Post’s Ellen Nakashima published what, at first sight, looked to be a blockbuster scoop, a Watergate scandal for the cyber age. The report alleged that the Democratic National Committee’s computer network was compromised by Russian hackers who stole caches of DNC opposition research on Trump. According to Nakashima, the Russian hackers were so thorough that they were able to access the DNC’s e-mail and chat traffic. Yet the firm that supposedly spotted the hack, Crowdstrike, admitted it was “not sure how the hackers got in.” They were definitely sure, however, that it was the Russians.

The American media, needless to say, jumped all over the story. The New York Times swiftly followed up with a story which proclaimed: “D.N.C. Says Russian Hackers Penetrated Its Files, Including Dossier on Donald Trump.” The dogged media critic Adam Johnson of FAIR (Fairness and Accuracy in Reporting) compiled a list of headlines that appeared in major media outlets within 24 hours of Nakashima’s scoop,

And there was more to come. A self-described “former spook” took to the pages of The New York Observer on June 18 to declare that not only do “Kremlin hacking efforts extend far beyond the DNC” but that the Islamic State’s hacking operation, the so-called Cyber Caliphate, is actually, you guessed it, the work of the Russians: “[T]he Cyber Caliphate” said the Observer, “is a Russian false-flag operation.”

Nor is that all. MSNBC’s Rachel Maddow got in on that act and went on what can only be described as a rant in which she accused the Russian president himself of being behind the DNC hack. “These hackers,” Maddow proclaimed, “were dispatched by the Russian government, by Vladimir Putin,” even though Nakashima’s report said no such thing. The report merely said that one of the hacking operations is “believed to work for the GRU, or Russia’s military intelligence service while CrowdStrike is less sure of whom” the other hacking operation “works for but thinks it might be the Federal Security Service, or FSB” [emphasis added].

The problem, of course, is that there is no hard evidence linking the Russian government, much less Vladimir Putin personally, to the DNC hack.

Indeed, Nakashima followed up her original report on June 15 by noting that a hacker who goes by the moniker Guccifer 2.0 had claimed credit for the DNC hack. In an interview with Vice Motherboard, Guccifer 2.0 claimed to be Romanian, not Russian:

And where are you from?
From Romania.
Do you work with Russia or the Russian government?
No because I don’t like Russians and their foreign policy. I hate being attributed to Russia.
Why?
I’ve already told! Also I made a big deal, why you glorify them?

Yet on June 20 the Post published another report by Nakashima headlined “Cyber researchers confirm Russian government hack of Democratic National Committee” in which Nakashima dismissed Guccifer’s claim of Romanian nationality, writing that “Analysts suspect but don’t have hard evidence that Guccifer 2.0 is, in fact, part of one of the Russian groups who hacked the DNC” [emphasis added].

By the very end of Nakashima’s June 20th dispatch, readers were informed that it is also possible “that someone else besides the Russians were inside the DNC’s network and had access to the same documents.”

None of the foregoing can come as a surprise, given that unproven allegations against both the Russian government and the Russian president have been a flourishing American media industry for several years. And if there can be said to be an industry leader, it is The Washington Post. In addition to its coverage, such as it was, of the DNC hack, the Post has published one story after another regarding Donald Trump’s alleged affinity for, and ties to, the Russian Federation.

On June 17, the Post published a piece that purported to explore “Trump’s financial ties to Russia and his unusual flattery of Vladimir Putin.” The report alleged that Trump’s “relationship with Putin and his warm views toward Russia” are “one of the more curious aspects of his presidential campaign,” because “the overwhelming consensus among American political and national security leaders has held that Putin is a pariah.” How the reporters square this with Secretary of State Kerry’s regular meetings with Russia’s foreign minister or President Obama’s periodic phone conversations with the “pariah” himself was left to the reader’s imagination.

Nevertheless, the report in guilt-by-association style warned readers that “Since the 1980s, Trump and his family members have made numerous trips to Moscow in search of business opportunities,” thereby implying that Trump may be, after all, the Manchurian Candidate of the Post’s fevered imagination. For all his many faults as a businessman, is Trump so different from other major American and Western business leaders in trying to pursue business opportunities in Russia? Who could imagine the Post holding, say William Browder’s past business experiences in Russia against him?

Still more alarming, according to the Post, is that “The Russian ambassador to the United States, breaking from a tradition in which diplomats steer clear of domestic politics, attended Trump’s April foreign policy speech” in Washington. The tradition they are referring to remains unclear, but if it exists, it is one that American ambassadors frequently break. For example, the US Ambassador to Ukraine, Geoffrey Pyatt, attended anti-government protests in Kiev alongside US Assistant Secretary of State Victoria Nuland in December 2013, while there are numerous reports of then–US Ambassador to Syria Robert S. Ford making appearances at anti-government rallies throughout Syria in 2011.

A day later, June 18, the Post published a piece by Ishaan Tharoor, who cited the previous day’s Post report on the alleged affinity between Trump and Putin and noted that the “former reality TV star would perhaps also tacitly approve of some of Putin’s other comments.” Perhaps. Also. Tacitly. In the words of George W. Bush’s CIA director, George Tenet, that’s a “slam dunk.”

Yet the Post is hardly alone in publishing undocumented and sensationalist pieces on Russia. The silliest example comes courtesy of the British newspaper The Telegraph, which, on June 21, wondered: “Is Vladimir Putin orchestrating Russian football hooligans to push Britain out of the EU?” The report, which was widely echoed in the United States, claimed that “Kremlin-orchestrated hooliganism isolates England and could lead to the national team’s expulsion from the championship, adding symbolic fuel to the Brexit campaign.” The authors provided zero evidence that the Kremlin “orchestrated” the football hooliganism (which was, at any rate, overwhelmingly of the English variety) that occurred in Lille during the European Football Championship.

Even before the results of the Brexit vote were known, journalists were making much of Russia’s supposed involvement in the matter. Neocon scholar Max Boot took to the pages of—where else?—The Washington Post on June 19 to warn readers that “Nigel Farage, leader of the UK Independence Party and a leading pro-Brexit voice, has harsh words for Brussels but nothing but kind words for Moscow.”

And following the Brexit vote, the media went into overdrive in trying to tie the result to the actions of the “operative in the Kremlin.” A representative piece comes courtesy of the ever-jejune BuzzFeed, which declared “The Big Winner Of Brexit Is Vladimir Putin.” Former US ambassador to Russia turned Washington Post columnist and Hillary Clinton foreign-policy adviser Michael McFaul told BuzzFeed that “Brexit’s greatest winner is Putin.” According to McFaul, “For years now, he has sought ways to divide Europe, including both the EU and NATO, hoping for a collapse of unity in Europe just as the USSR and the Warsaw Pact did a quarter century ago.”

Meanwhile, the UK’s Guardian claimed Russia and, for good measure, Iran, were “delighted” by the Brexit result. But far from being “delighted,” the Russian president repeatedly stated Russia’s neutrality during the week preceding the vote and is quoted in the Guardian report as merely saying that the Brexit may have “positive and negative consequences” for Russia.

Meanwhile, in addition to its coverage of Kremlin-inspired football hooligans, The Telegraph published an article that enters into the realm of science fiction, claiming that “Russia aims to develop ‘teleportation’ in 20 years.” Well, beam me up, Scotty. Yet the text of the Telegraph report says no such thing, only that a “strategic development program” has been “drawn up for Vladimir Putin” that “would seek to develop teleportation by 2035.” Nowhere is it said that the Russian government is actually pursuing such a thing.

All of this would, of course, be amusing, if the geopolitical ramifications weren’t so dire. The incessant barrage of factually challenged, evidence-free accusations that paint Russia and its president in the worst possible light have helped give rise to the perilous state of affairs in which we find ourselves.

And while Russia continues to support the separatist fighters in eastern Ukraine, NATO and American troops have been massing in western Ukraine on yet another “training exercise.” Meanwhile, the forthcoming NATO summit in Warsaw is less than a week away. And though responsible voices like German Foreign Minister Frank-Walter Steinmeier have decried NATO’s penchant for “warmongering,” it seems the closer we get to the upcoming summit, the further divorced from reality the media’s coverage of Russia becomes.

Misinformation from our media has eroded the possibility of any détente between the United States and Russia and has put the two nuclear superpowers on a collision course on the ground in eastern Europe, in the skies over Syria, and on the Baltic and Black Seas.

In times like these the public would be better served by less sensationalist, more fact-based coverage of Russia and its government.