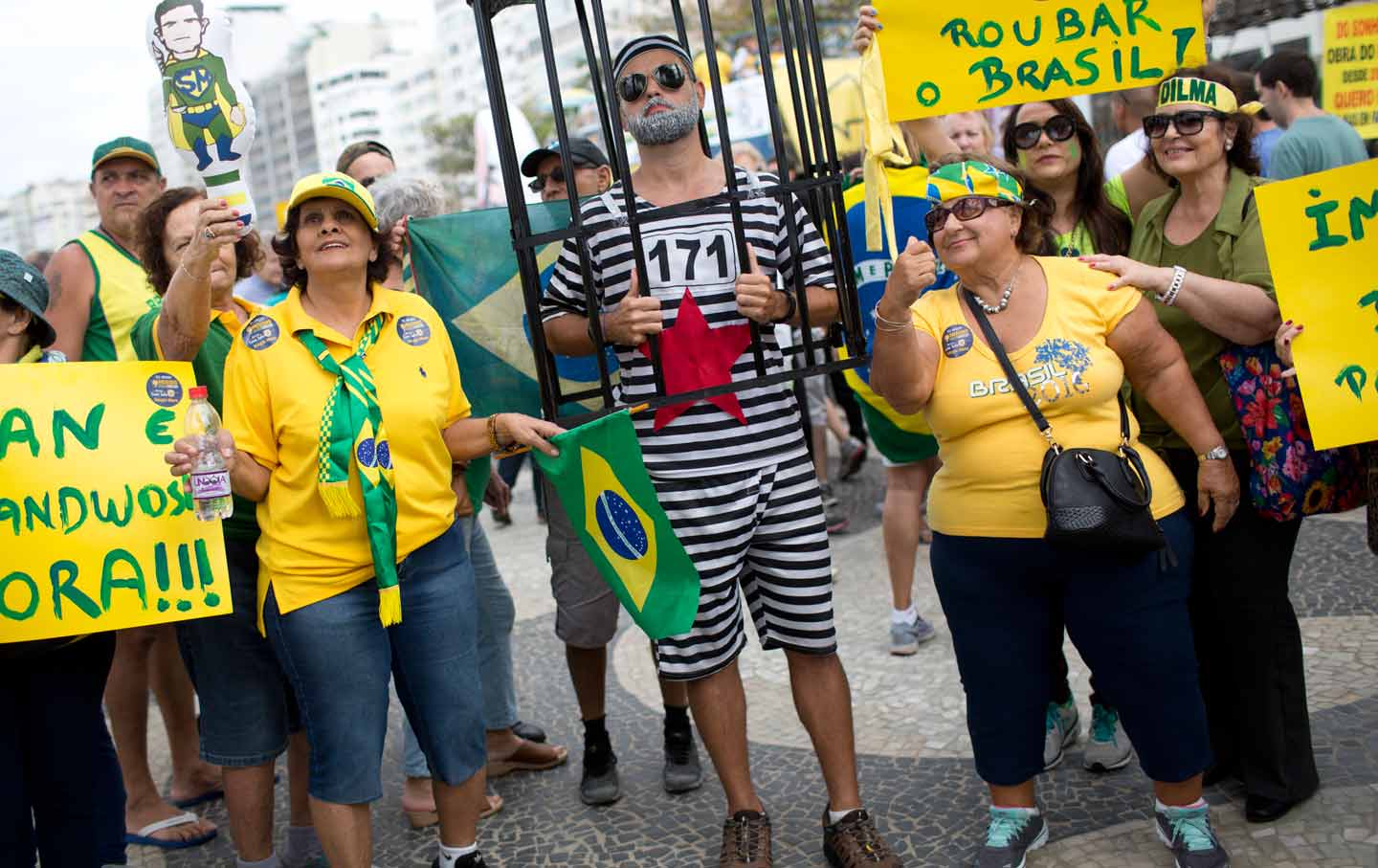 Anti-government protests continue during the week leading up to the Rio Olympics. (AP Photo / Silvia Izquierdo)

This week I travel to Rio for the 2016 Summer Olympics. The purpose is to report on the last round in what has been a harrowing, exhausting decade-long battle between the people of Brazil and the demands of those utterly unaccountable, scandal-plagued sports bodies, FIFA and the IOC. Over that time, I’ve written countless articles and a book, Brazil’s Dance with the Devil, about how combustible this situation could be: hosting the World Cup and the Olympics, back to back with one city, Rio, as the epicenter for both events. This had never been done in history—let alone in the post-9/11 world—and would be a challenge for any country.

Putting these mega-events in Brazil, for those in the United States just now learning about the country, must seem like madness. The news is filled with stories of disease, filthy water, and possible terror fears aimed at Olympic venues. These breathless missives are also almost invariably framed in how these serious concerns would affect tourists.

It’s worth noting, however that today’s dystopic landscape was yesterday’s triumph. In 2008, Brazil’s ruling elite and many in the country as well, were not apprehensive but eager to host the World Cup and the Olympics. And why not? The economy was climbing, the ruling Workers’ Party told the people that hosting these events would be a method for attacking economic inequality, and the nation broadly was ready to announce to the world that they were players.

This was never about sports. This was about patriotism and power. This was about the ascension of the BRIC (Brazil, Russia, India, China) nations on a sea of rising oil prices. This was about believing that a spot on the UN Security Council was within their grasp. And for the construction industry, this was about mega-profits. As Alex Cuadros wrote in The Atlantic, “Contracts for everything from stadium and train-line construction to port renovations have funneled billions of dollars in taxpayer-subsidized revenues to a handful of Brazil’s most powerful, well-connected families and their companies. This disconnect—between populist promise and the uneven benefits that followed—is emblematic of the failed Olympic ambition to remake Rio, and a slew of questionable priorities that have brought Brazil to its knees.”

It is a hell of a journey from that moment when Rio won the Olympics and Lula said:

Today I have felt prouder of being a Brazilian than on any other day. Today is the day that Brazil gained its international citizenship. Today is the day that we have overcome the last vestiges of prejudice against us. I think this is the day to celebrate because Brazil has left behind the level of second-class countries and entered the ranks of first class countries. Today we earned respect. The world has finally recognized that this is Brazil’s time.

In retrospect, it is difficult to read these words and remember the general belief that hosting the Olympics would only aid Lula’s social-democratic vision and not think of the words of Saul Bellow, who said, “A great deal of intelligence can be invested in ignorance when the need for illusion is deep.”

The current horror show reflects Lula’s own journey from working-class labor leader during a time of military dictatorship to the heights of political power to someone who is now being brought to trial on charges of obstruction of justice.

It’s been a hell of a decade. At The Nation, we started covering it years in advance, because hosting these events seemed like a recipe for drama and dissent. But tack on the World Cup and the contradictions of a social-democratic government pledging that these sporting events would somehow be a tool to attack inequality, conflict was inevitable. What I didn’t see—what no one saw—was how catastrophic everything was about to become. Oil prices fell, the economy contracted dramatically, and Brazil’s rulers saw it as a moment to create political chaos by attacking the Workers’ Party and impeach President Dilma Rousseff.

Now, not unlike the candidacy of a certain jackass reality-television star, it is difficult to keep track of what we should be most outraged by and what event is most symbolic of all that is going wrong.

What is the best emblem of Rio’s Olympic spiral? Is it the two skydivers who fell to their deaths while attempting, with 26 others, to form the Olympic rings in an effort to hype the Games? Is it the killing of Olympic mascot Juma the jaguar, shot dead by a police officer when it escaped its leash after the ceremonies? Or maybe it’s the recent demonstration where protesters forcibly grabbed and extinguished the Olympic torch? Or are high-profile media moments like this just distracting us from the scandals that are going undiscussed: the police violence against the poorest citizens of Rio, the medical shortages as health officials attempt to stem the spread of the Zika virus, and the obscenity of spending billions of dollars while pressing needs go unaddressed?

It is impossible to know how this will all end in two weeks. Catastrophe is a possibility. Also is the victory—the triumph—of low expectations. But either way, even if this is the “last dance” for Rio’s life in the eye of the FIFA/IOC hurricane, the hangover begins the next day. The hope—and frankly our demand—is that the media who are only now discovering the crisis in Brazil don’t stop covering it, once the confetti has been cleared. For the people who live in Rio, one of the most vibrant cities on earth, the next two weeks might be their last dance with the IOC, but the struggle is only just beginning.