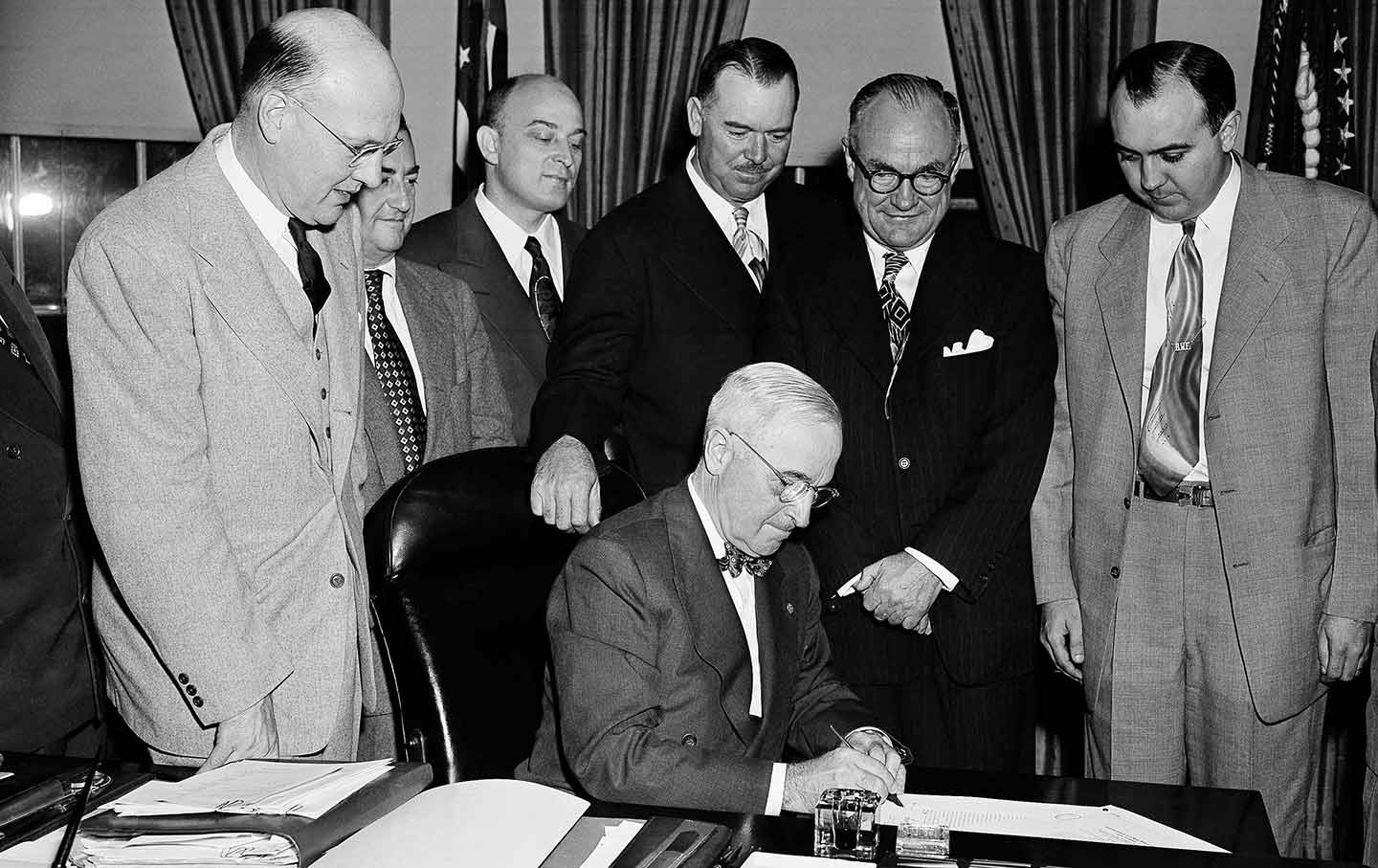 When I first saw scenes of Alexandria Ocasio-Cortez announcing the Green New Deal resolution in front of the Capitol, my thoughts drifted to a dead white guy. William James’s 1910 essay “The Moral Equivalent of War” imagines, in a world in which humanity, finally done with the mass murder of warfare, redeploys the resolve and courage of fighting toward great public works. Ocasio-Cortez and James ask of us the same basic question: Can we mobilize ourselves to great deeds that involve building rather than killing?

It turns out I wasn’t the only one having William James reveries. National Review’s Jonah Goldberg devotes a long essay to the comparison. Writing as if small-government conservatism is still a thing, Goldberg concludes that such an initiative comes at the cost of freedom, sacrificed on the altar of federal power.

Some degree of centralization is necessary for such an ambitious national project. On both the left and the right, though, memories of the New Deal too often forget one of its most important ingredients: economic democracy. This is also an ingredient of the Green New Deal—and we shouldn’t forget it.

Among the most successful, enduring New Deal mobilizations was the 1936 Rural Electrification Act. It provided low-interest loans and technical support for electricity in rural communities that corporate utility companies didn’t think were worth the investing in. By and large, these loans were used to form cooperatives, owned and governed by the residents they served.

Many people at the time considered the idea a little too pinko—and President Eisenhower did his best to kill the program—but now those co-ops are the economic backbone of some of the country’s most conservative regions. They still serve more than half the landmass of the United States. During a campaign stop at South Carolina co-op in February 2016, Donald Trump spoke fondly of the rural-electrification legacy: “How about life without electricity?” he bantered. “Not so good, right? Not so good.”

The idea of using government to enable economic democracy was a widespread idea in the thirties. Before the postwar Red Scares and company men took over, the idea of the “cooperative commonwealth” seemed to some inevitable—an order in which private capitalism and state power both surrendered to the rise of an economy accountable to those creating value in it. Farmers had been building the Farm Credit System to finance their cooperatives, and credit unionists established laws to enable democratic banks to spread across the country. When the Depression came, these kinds of models seemed like a natural cure. Government agencies produced films promoting cooperatives from the Depression era and 1940s into the early ’50s. Economic democracy was to be the next evolution of political democracy.

Many New Deal programs had a cooperative bent. The Tennessee Valley Authority helped establish utility co-ops, consumer co-ops, and farmer co-ops across its territory. Agricultural reforms included farmer co-ops as a centerpiece. Protections for workers’ collective bargaining made a beachhead for democracy in the workplace. The Resettlement Administration built Greenbelt Towns like Greenbelt, Maryland, and Reston, Virginia—centrally planned, but with the intention of being cooperatively governed.

This was not the whole story, of course. Other programs retained more bureaucratic, even militaristic, management styles, like the Works Progress Administration and the Civilian Conservation Corps. The exclusion of Americans of color from many programs has proven the New Deal’s cruelest original sin.

Even so, it showed economic democracy could accomplish great things by putting ordinary people in control.

Today, Ocasio-Cortez’s resolution scrupulously inoculates against the racism of its predecessor with its emphasis on “frontline and vulnerable communities.” But it preserves the tension between top-town control and economic democracy. There are big promises, like health care and good jobs for all, stated with such brevity that they seem to imply some autocratic fiat. There is also also an insistence on “ensuring the use of democratic and participatory processes,” for example, and “that the public receives appropriate ownership stakes and returns on investment.” The document refers to worker cooperatives as an essential stakeholder.

Language like “participatory processes” and “appropriate ownership stakes” can sound empty to ears unaccustomed to economic democracy. It’s no surprise that critics like Jonah Goldberg would overlook them and see only the specter of statism. But prominent Green New Deal advocates are already pointing to the very serious and specific examples of old New Deal programs like cooperative rural electrification.

The funny thing is, while President Trump and Senator McConnell are doing their best to laugh the Green New Deal off, its mechanisms of economic democracy have widespread support in their own party. Both the Republican and Democratic 2016 platforms advocated more employee ownership, and last year’s Main Street Employee Ownership Act passed with strong bipartisan support.

Vice President Pence has been a longtime friend of Indiana credit unions, and Secretary of Agriculture Perdue is a proud member of his local electric co-op in Georgia.

If there is any possibility for consensus left to be found in Washington, this is the part of the Green New Deal where we will find it. If not, the reactionaries will have to be dragged into democracy kicking and screaming, as they did in the 1930s. They will be thankful for it in the end.