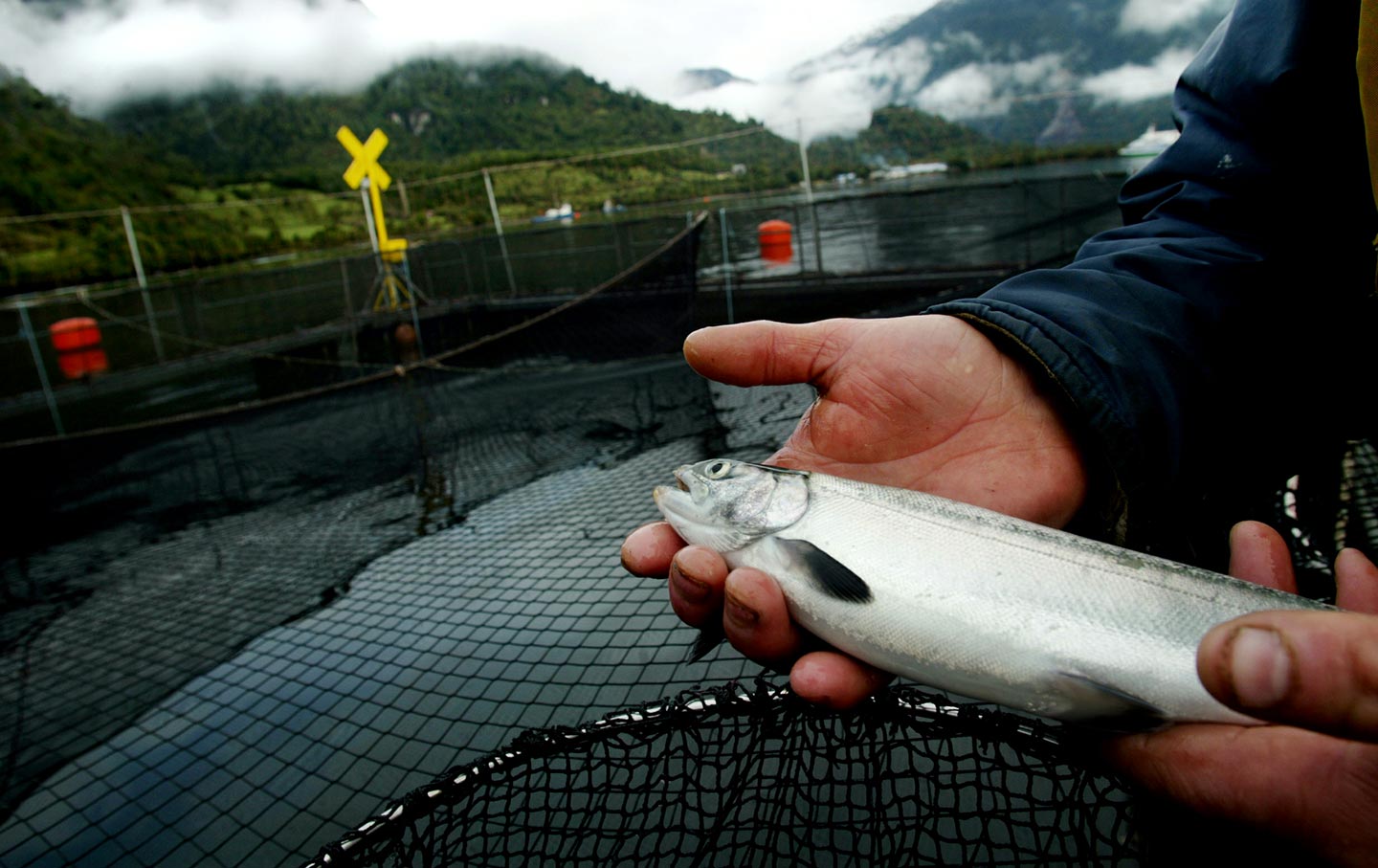 A Chilean worker holds a young farmed salmon he pulled out of a tank anchored at the Pacific port of Chacabuco, some 1,800 kilometers south of Santiago, September 17, 2003. (Reuters / Carlos Barria)

Kawésqar National Park, Chile’s largest, covers 6.9 million acres of islands and peninsulas in southwestern Patagonia. The Socialist president, Michelle Bachelet, signed a decree approving its creation on January 29, shortly before she stepped down. But the park will protect only the area above water, not the adjacent waters and their fragile ecosystems. This anomaly springs from a desire not to hinder the growth of Chile’s salmon farms. In 2017 salmon was Chile’s second-biggest export after copper, earning it $3.9 billion.

Translated by Charles Goulden.
This essay continues our exclusive collaboration with Le Monde Diplomatique, monthly publishing jointly commissioned and shared articles, both in print and online. To subscribe to LMD, go to
mondediplo.com/subscribe.

Salmon, once a seasonal luxury, has become part of the world’s daily diet. After tuna, salmon, and trout account for the largest share by value, and second largest by tonnage, of a global seafood and freshwater-fish market worth an estimated $155 billion. Fish farms produced 2.25 million metric tons of Atlantic salmon (Salmo salar) in 2016, compared with only 300,000 tons in 1993.

Salmon farming was introduced to Chile in the 1980s by the military dictatorship, betting on climatic and geographical similarities between Chile and Norway, a pioneer in aquaculture. The fjords (fiordos) of the South Pacific coast are now filled with cylindrical cages, and Chile produces 23.6 percent of all the world’s salmon supply, exporting around two-thirds of its output, mainly to the United States, Japan, and Brazil.

The people most directly affected by the new national park are the local Kawésqar population, descended from indigenous nomadic fishermen who canoed along Patagonian coasts until they settled in the mid-20th century. The 12 Kawésqar communities recognized by the state (since 1993) were consulted prior to the park’s creation, but four refused to back the project because the proposed designation as a “multi-use coastal marine area” was inadequate: ‘The sea is an integral part of our cosmogony,” said Leticia Caro, spokesperson for the rebel communities. “We have a duty to look after the marine environment. This park usurps the name Kawésqar and hands the sea over to the salmon farmers.” 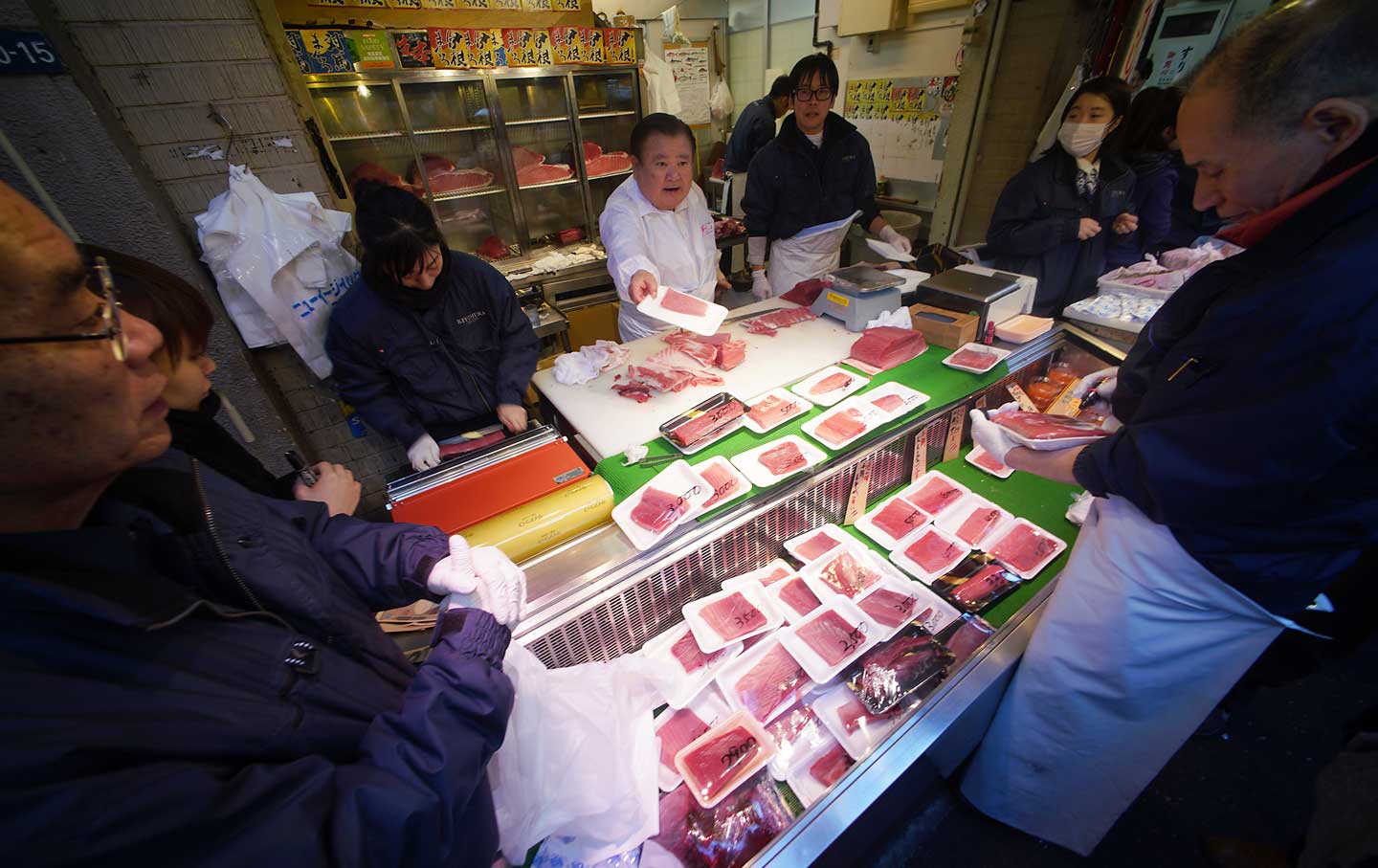 No More Tuna for Japan’s Sushi?

‘The waters here used to be so clean’

Her father, Reinaldo Caro, a deep-sea fisherman in his 70s, said catches are dwindling: “It takes us a whole day to catch what we used to net in an hour and a half.” He blamed the farms: “The sea around the salmoneras is dead. The waste they produce falls to the seabed. The waters here used to be so clean.… The worst is, if we catch salmon that have escaped from farms, and sell them, we get fined, because they still belong to the farms.” This July, another 690,000 salmon stuffed with antibiotics escaped from one farm.

NGOs in Santiago confirmed his story. Liesbeth van der Meer, vice president of Oceana Chile, a marine conservation NGO, said, “Fish farmers are only concerned with growing their business; they never stop to consider what the ecosystem can stand.” Greenpeace Chile coordinator Estefanía González said, “Magallanes [the southernmost region of Chile] has whales and penguins. We calculate the water in the fjords takes 30 years to be fully renewed. Why establish a polluting industry in such a fragile ecosystem?”

This April the Kawésqars won a first victory: To the great displeasure of the farmers, they managed to have the waters of the national park brought under the Lafkenche law of 2008, which sets aside marine coastal areas for the use of indigenous peoples. Until the government authorities have ruled on this, which could take several years, 80 percent of applications for fish-farming concessions in Magallanes have been suspended.

Óscar Garay, farming director at Salmones Magallanes and vice president of Salmonicultores Magallanes, the regional farmers’ association, said, “I’m not blind. Fish farming has an impact on the environment. Every human activity has an impact, even catching a plane. The question is what kind of impact, and how can we reduce it?” What about fishermen’s reports of dwindling catches? “It’s the same all over the world, even where there is no salmon farming. In fact, aquaculture makes it possible to avoid the kind of intensive fishing that is depleting our oceans.”

What did he think of the adjacent waters’ being excluded from the new national park and the Kawésqars’ claims under the Lafkenche law? “A handful of Kawésqars want to lay claim to the coast. Others haven’t got a problem with the park. Indigenous peoples obviously have rights, but the Lafkenche law is too vague. Anyone can claim an exclusive right to use the ocean by saying that his indigenous ancestors lived there. I hope President Piñera will improve it.” Sebastián Piñera, a conservative billionaire reelected this year (he served a first mandate 2010–14), promised in September 2017 to “fine-tune this law to ensure that ancestral sites are protected without hindering economic activity.”

In cahoots with business

Juan Carlos Cárdenas, a veterinary surgeon and director of the marine conservation NGO Centro Ecocéanos, said, “In Chile, aquaculture is a production model that the state controls very little, relying on business to regulate themselves.” The authorities require an environmental impact assessment for only one in every 10 applications for a fish-farming concession. For the others, they are satisfied with an environmental impact “declaration,” which the farmers write themselves. Cárdenas said: “The upper echelons of the state are in cahoots with the industry,” pointing out that Jorge Rodríguez Grossi, economy minister from 2017 to 2018, had been on the board of Australis Seafoods, one of Chile’s biggest salmon-farming enterprises, from 2012 to 2015.

Felipe Sandoval Precht, president from 2014 to 2017 of SalmonChile, of which almost all the producers are members, has served as secretary of state for fisheries. This closeness between politicians and farmers is not unique to Chile. In Norway, Marit Solberg, vice president of industry giant Marine Harvest, is the sister of Prime Minister Erna Solberg. This gives ammunition to those who criticize both governments for failing to learn from the health and environmental crises that often affect farms.

In 2007 infectious salmon anaemia (ISA) ravaged Chile’s farms, and production fell by nearly half. The virus spread quickly because of the high concentration of farms and insufficiently strict standards. In 2016 toxic Chattonella-type algae poisoned cages of salmon around the island of Chiloé. The farmers called for help. Sandoval Precht wrote: “Mortality is higher than our logistical capabilities can cope with.” Without any impact studies, Sernapesca immediately authorized “the adoption of exceptional measures for reasons of force majeure” and the Chilean navy dumped 9,000 metric tons of rotting salmon off the island, which led to a second proliferation of toxic algae, this time Alexandrium catenella, causing an unprecedented red tide that decimated local wildlife. All local seafood became inedible. The crisis reawakened old antagonisms between fish farmers and fishermen, already worsened in 2013 by a law that gave preferential treatment to seven families, some associated with industrial salmon farming, who controlled 80 percent of Chile’s fisheries.

‘We must look to global warming’

Marcela Ramos, a teacher, was a leader of the Chilote defense movement in 2016. “All the government was offering by way of compensation was 100,000 pesos [around $150] per fisherman. So we built barricades and blocked the roads and ferries for 18 days. We wanted the authorities to recognize that the salmon industry was responsible, and that it should pay for the damage.” The island was cut off from May 2 to 19. Adriana Ampuero, a member of the Chilote autonomy movement and coordinator of the left-wing Frente Amplio party, said: “The government wanted to get it over and done with before Navy Day, on May 21. They had to award compensation, but nothing has been done to stop it happening again.”

The Chilote protesters are certain dumping the rotten fish caused the red tide. The salmon farmers reject this, claiming historical evidence of red tides well before the industry came into existence; indeed, the Chilote writer Francisco Coloane had already described a red tide in the Golfo de Penas (Gulf of Sorrows) in 1945. Garay mentioned the death of a settlement on the Magellan strait in the 16th century: “The Port Famine tragedy was apparently caused by a red tide. Were there any salmon farms at the time?” Alicia Gallardo, assistant director of Sernapesca’s aquaculture division in Valparaiso, said: “The environmental court ruled there was no proof of a link between fish farming and red tides. We must look to global warming for an answer.”

“The red tide is nothing to do with climate change,” said Tarsicio Antezana, a retired marine biologist who taught at the Scripps Institution of Oceanography in San Diego and now lives on Chiloé. “This kind of phenomenon is promoted by ammonia, and the decomposition of organic matter—in this case, salmon cadavers—produces ammonia. Sernapesca reports to the economy ministry, so what is the ministry’s priority? The environment or economic growth?”

With up to 6,000 people working directly for the salmon industry, and twice that number indirectly, the government stresses the importance of protecting jobs. But these are precarious and poorly paid jobs, said Gustavo Cortez, who works in a factory owned by the Norwegian firm Marine Farms and is president of the Chiloé salmon-workers’ union: “People work 10 hours a day for 400,000 pesos [$600] a month. Many do a lot of overtime to make ends meet. The red tide, like the ISA virus in 2007, triggered a huge crisis: 80 to 90 percent of our workers were made redundant. We had to fight to get compensation from the government. Chile is a very neoliberal country. In fact, the fish farmers had a very good year.” The price of salmon went from $5.90 a kilogram in March 2016 to $7.33 in April and $9.00 in September. Garay said: “It’s the law of supply and demand. When supply falls and demand stays the same, prices rise.”

To fight disease, Chile’s farmers use huge quantities of antibiotics, 500–700 times more than their colleagues in Norway. “Fish farms use 80 percent of the antibiotics Chile imports,” said Van der Meer. With the World Health Organization warning of the dangers of antibiotic resistance, Sernapesca is now demanding a reduction in their use.

The Chilean government quietly admits that aquaculture has reached its limits in the Los Lagos and Aysén regions. Gallardo said: “No new concessions will be granted in these regions. Taking account of environmental conditions and the need for sustainable development, we are in the process of relocating farms.” The farmers now have their eye on the Magallanes region. “It has 52,000 kilometers of coastline,” said Garay. “That’s more than Los Lagos and Aysén put together.”

In May 2017 Gabriel Boric, a leader of the 2011 student revolt and now a Frente Amplio deputy in Chile’s parliament, proposed a moratorium on new concessions “until scientific studies can determine what the ecosystem will sustain. But my proposal was rejected as unconstitutional: They don’t want anyone to interfere with the economy.” Garay said: “The trouble with Boric is he doesn’t like capitalism.”