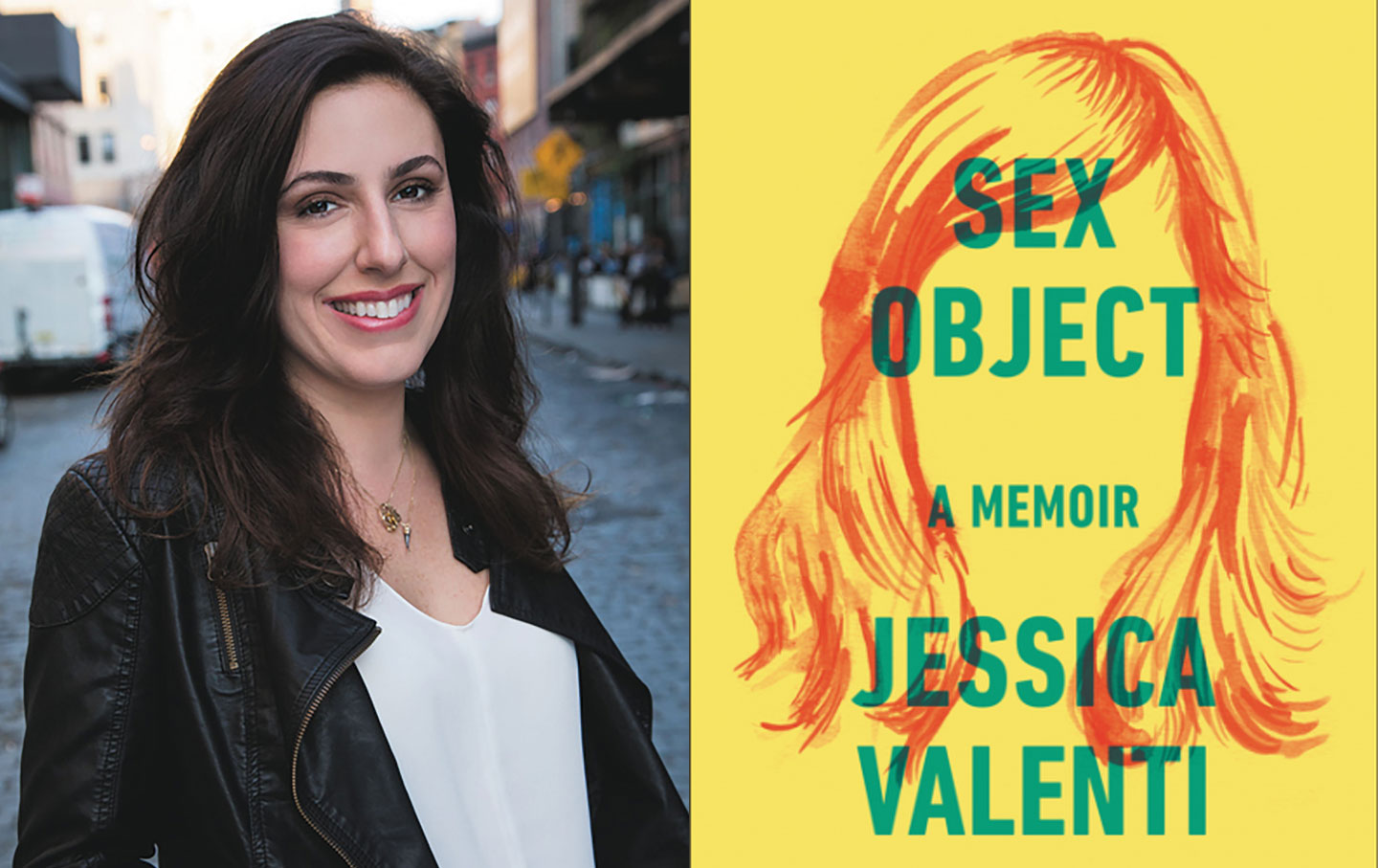 The title alone of Jessica Valenti’s Sex Object: A Memoir invites backlash. Even without the context of Valenti’s career as a feminist writer, it’s a bold statement, almost deliberately soliciting the dig that will follow: So, you think you’re sexy? She does, actually, if inconsistently, but that’s not the point. By welcoming such a reaction, Valenti urges us to get back to probing the foundational issue of objectification. In other words, if you think Valenti calling herself an “object” is a compliment, well, you just don’t get it.

Published earlier this month by Dey Street, Sex Object, Valenti’s fifth book, aims to chip away at the irreverence and denial that mainstream feminism often uses to soften the blow of objectification. Valenti is the founder of Feministing.com, a former Nation columnist, and a current staff writer at The Guardian. In each of these roles she has tackled subjects at the intersection of feminism, politics, and culture—high-profile rape cases, legislation aimed at curbing reproductive rights, sexism in the media and in everyday life. But in Sex Object Valenti looks inward, exposing a troubling paradox that accompanies such work: Can intellectual awareness of the impact of objectification undo its effects? Or, as Valenti asks, “Who would I be if I didn’t live in a world that hated women?”

Valenti aims to unravel that question by treating herself as a case study. The memoir is a collection of essays, and each essay is grounded in a major life experience presented straightforwardly and without further examination. Outside of the introduction, Sex Object is less analysis than raw material. It’s as if she’s approached her own life like a scientist compiling empirical evidence of sexism. She writes about the man she saw masturbate on a subway platform, the teacher who asked her out after graduation, the time Politico published an article about her breasts. The finished product is not so much commentary as it is deconstruction. By taking on this methodology, Valenti is asking us to return to a place of simplicity in our personal feminisms. Enough of the snark. Sexism hurts women, and performative strength won’t change that.

“The feminism that’s popular right now is largely grounded in using optimism and humor to undo the damage that sexism has wrought,” she writes, invoking the work of Amy Schumer, Beyoncé, and Sheryl Sandberg. “But maybe we’re doing ourselves a disservice by working so hard to move past what sexism has done to us rather than observe it for a while.”

Sex Object engages in observation as a means of setting an example. These are field notes from building a feminist perspective, a worldview that forms in response to sexism and misogyny, yet is also inevitably warped by those forces. While some of the experiences Valenti recounts will be (sadly) familiar to many women, she creates something incredibly readable by presenting each story in detail and as unanalytically as possible. The facts of the night she was date raped, for example, are relayed without much commentary. As is the decision to avoid identifying her violation with its proper label.

“I have never called this assault. I’m not really sure why,” Valenti writes, in the chapter called simply “Grilled Cheese.” “As a feminist writer I’ve encouraged others to name the thing that happened to them so our stories can be laid bare.”

“I know that if any young woman told me this same story I would not hesitate to call it what it is,” she adds later. “I don’t know why I don’t allow myself the same courtesy.”

This admission is one of several instances in which Valenti is open about doubting whether she is a good feminist. In other instances, she questions whether she is a good person, even revealing a glimpse of suicidal thoughts in a moment in which swimming grew too difficult. She also uses a lot of space anticipating criticism or just potential corrections to her word choices, with lines like, “I know it’s called the cycle of violence, but in my family female suffering is linear.” In moments like these, Valenti showcases a secureness in her insecurities, a sense of strength in admitting that simply being a woman has hurt her sense of self in ways from which she will likely never recover.

LIKE THIS? GET  MORE OF OUR BEST REPORTING AND ANALYSIS

One particularly itchy chapter titled “D” tells the story of a time a close family friend attempted to kickstart an affair. Valenti is able to identify so-called D’s reckless selfishness in this request, though it doesn’t make her any less ashamed. “I can’t escape the feeling that men see that I am the kind of person for whom doing the right thing does not come easily,” she writes. “And I cannot believe that so long after I first experienced a man making it clear that his desires trump my comfort, I still accept it.” The emotional torture she inflicts on herself is upsetting, in large part, because it’s clear she knows exactly what she’s doing, and remains powerless to stop it.

For Valenti, resistance is futile, though that doesn’t make awareness any less necessary. Being a woman means “that it’s not a matter of if something happens, but when and how bad.” Men rape and kill women. There’s nothing to argue there, but we forget the ways in which living in a world colored by misogyny shifts the smaller intricacies of who we tell ourselves we are. “Victimhood doesn’t need to be an identity,” she writes, “but it is a product of facts.” And, two pages later, “Pretending these offenses roll off our backs is strategic—don’t give them the fucking satisfaction—but it isn’t the truth. You lose something along the way.”

What Valenti espouses in refusing to “pretend” is a sort of informed pessimism. She is actively aware of the ways sexism has shaped her sense of self. But having a name for an incurable disease doesn’t lessen the symptoms. Valenti delivers her own diagnosis without much cushioning. She wants to take us back to a place of telling stories, while actively refusing to bear the burden of bearability.

So often, as she describes it, “You perform your strength, your sense of humor, your personality so that it is palatable, easily consumed in small, bite-sized pieces.” That’s what she’s refusing to do here. What emerges is an act of mourning for person she might have been if this world didn’t hate women. There’s not so much a solution as a matter-of-fact condemnation of the way things are, because, frankly, there isn’t anything even remotely resembling a happy ending yet. Men will continue to rape, kill, and otherwise objectify women, people will question whether Valenti “deserves” to be called a sex object. (In fact, the right-wing Independent Women’s Forum already called an excerpt from the book a “humblebrag.”)

Valenti didn’t write this memoir in defiance of that pre-fab response. Instead, she takes on a quivering vulnerability which is possibly her most most powerful strategy to date. Sex Object ultimately functions as a painful yet compelling call to thoughtfulness, to embrace the unfiltered experience of oppression. It’s as if Valenti has paused her life’s work attempting to eradicate sexism, opting instead to suggest that we please at least stop pretending we don’t care it exists.