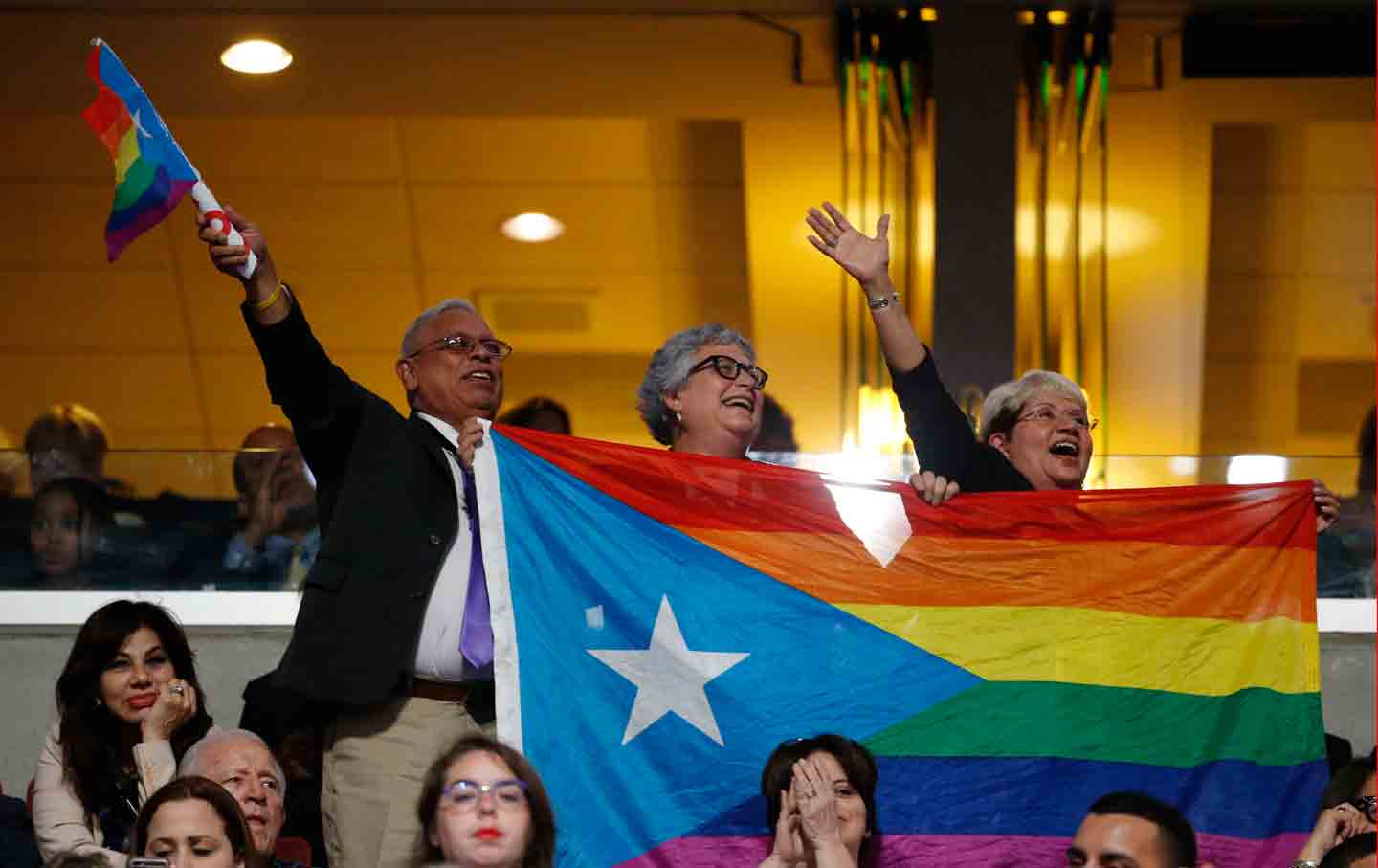 Philadelphia—On this exact day in 2008, I sat on the floor of Invesco Stadium listening raptly to Senator Barack Obama’s acceptance speech along with 84,000 similarly mesmerized people. Towards the end, he made history yet again with this one sentence: “I know there are differences on same-sex marriage, but surely we can agree that our gay and lesbian brothers and sisters deserve to visit the person they love in a hospital and to live lives free of discrimination.”

As the entire stadium burst into applause, and as those not already standing rose to give Obama a standing ovation, I turned to one of my fellow reporters and said, “Holy shit! Did that just happen!?” Only four years ago, same-sex marriage had been hastily and inaccurately blamed for costing John Kerry the presidency, and walking around Denver, often with LGBT delegates or reporters, I still felt like a skunk at the garden party. So Obama’s mere mention of gays and lesbians—as brothers and sisters, in his most important speech to date—seemed brave; it felt like affirmation.

What a difference eight years make! If any Democrat said those words on the floor of the Wells Fargo Center today, he or she would be booed off stage—for suggesting that opposition to same-sex marriage is a position one could reach in good faith instead of by rank bigotry, for articulating such a stingy version of LGBT equality, and indeed for leaving the B and the T out of the picture altogether.

In fact, we now know that Obama himself thought those words were garbage even as he said them. As David Axelrod has revealed in his memoir, Obama’s opposition to same-sex marriage was a contrived bit of fakery—as was his entire subsequent “evolution” on the issue. “I’m just not very good at bullshitting,” Obama told Axelrod after a campaign event where his public position came up. As many suspected all along (including myself), in private, the Obama of 2008 was the same as the Obama of 1996, who supported legalizing same-sex marriage when he ran for the Illinois state Senate. But winning the White House meant courting moderates and Christians, as well as turning out the black church—and that meant, so Obama and Axelrod thought, bullshitting—it meant posturing around LGBT rights in order to appeal to what one believed was the widest possible audience. It was a political calculation.

“Oh my God, this lady Democrat is going to put me in her purse and take me home as a souvenir!”

I dredge all this up now because walking around Philadelphia is a wholly different experience from Denver. There are rainbow flags, pins, T-shirts, stickers, and wristbands everywhere. The appearance of a trans convention goer is a completely unremarkable occurrence. At an Emily’s List event, I fell into a conversation about the meteoric changes in LGBT rights with a group of Southern, older, women delegates. One of them pinched my cheek and asked me if I was married yet, with a gleam in her eye that made me think, “Oh my God, this lady Democrat is going to put me in her purse and take me home as a souvenir!” LGBT folks—we’re the unofficial mascots of the 2016 DNC.

This sea change is real and heartfelt, but on the podium, it is also a political calculation. Last night, speaker after speaker, from President Obama to Detroit Mayor Mike Duggan to Congresswoman Sheila Jackson Lee, seamlessly integrated LGBT people into a mosaic of American diversity. In 2016, this is routine; in 2008, it would have been a shot across the bow. Other speakers were chosen to give more sustained testimonies about LGBT people as an essential Democratic constituency. Christine Leinonen, whose son Christopher was killed at Pulse nightclub in Orlando, gave a wrenching speech, flanked by two of Christopher’s friends who survived the attack. California Lieutenant Governor Gavin Newsom—who in 2004 was publicly excoriated by many Democrats, including his home-state senator Dianne Feinstein, for marrying same-sex couples in city hall as mayor of San Francisco—was also given a prime-time slot to lambast GOP veep-nominee Mike Pence as “America’s most anti-LGBTQ governor” and to condemn Pence’s support for conversion therapy.

More remarkably, in an evening that also featured Leon Panetta, Kristen Kavanaugh, a former Marine Corps captain who served for 5 years as a closeted lesbian and who has since started the Military Acceptance Project, gave a speech that never mentioned gays in the military (except by virtue of her mere presence) but that did include plenty of chest thumping for Hillary Clinton as a strong commander-in-chief who can “defeat and destroy ISIS.” If you had told me eight years ago that a lesbian advocate would be paired with a former Secretary of Defense to attest to the Democratic nominee’s ability to run the war machine—I would have had you institutionalized.

Cleveland was dark and mean-spirited; Philadelphia has been optimistic, enveloping, and warm.

This is change. It is also branding. Heading into the last night of the convention, the Democrats have successfully showcased themselves as the party of inclusivity, in contrast to the Republicans. LGBT people have been among the most visible elements in this display, but immigrants, people with disabilities, survivors of sexual assault, people with chronic illnesses, and religious minorities have all been at the forefront. Where Trump’s Cleveland was dark, disturbing, mean-spirited, and divisive, the Democrat’s Philadelphia has been optimistic, enveloping, and warm. Even the convention’s nationalism, a required aspect of these things I suppose, has been tempered by sunshine. “America is already great,” said President Obama last night.

Missing from this picture is any sustained acknowledgement of the economic pain millions of Americans are suffering, and a story about how the economy works again for those at the bottom. In an election where Trump is making a serious and credible play for white working-class voters, this is worrying. The answer, however, is not, as Joe Biden annoyingly suggested on Morning Joe yesterday, to talk more about white, working-class men. In 2016, class shouldn’t be reducible to them. And diversity shouldn’t just feel like an opportunity either. The challenge for Hillary Clinton tonight is to weave these two strands together—to tell a story about economic fairness in a 21st-century America. I hope she meets it. I’m not holding my breath.