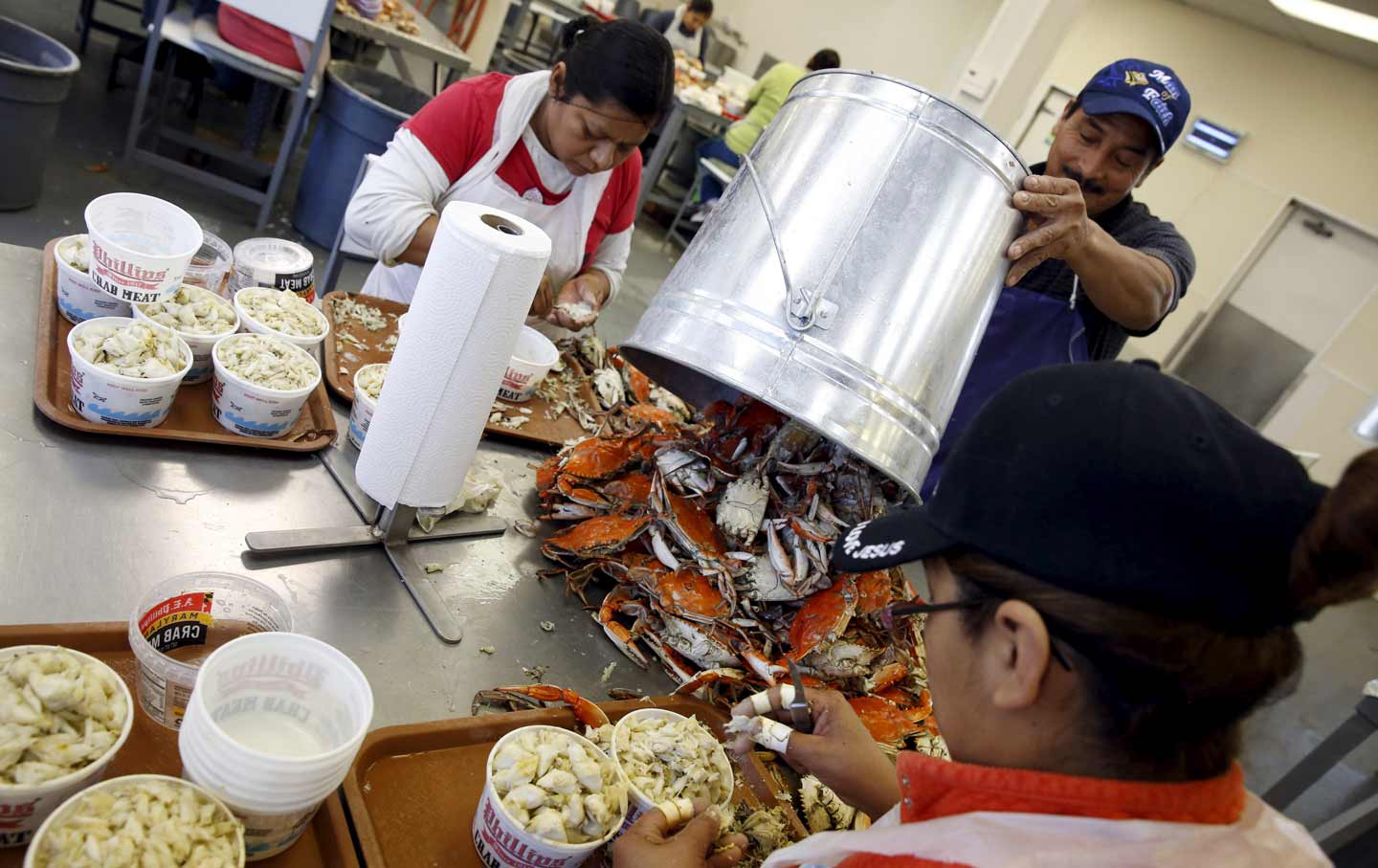 The catch of the day you ordered for dinner journeyed an unfathomably long way to your table: Your shellfish might have been netted on the Indian ocean, but the workers who hauled it ashore were trafficked from impoverished Southeast Asian villages onto black-market fishing vessels off the Thai coast. The lucrative fishstocks were likely then channeled through a pipeline of bribed corrupt officials. The hands that pack your crabs belong to guest workers imported from Mexico to Bayou processing plants, to work their fingers raw for a season and get shipped home, sometimes missing thousands of dollars in back wages, or maybe a finger.

But while you chow down, activists are tracing the global “seafood value chain” from coastline to production line, presenting fresh research by National Guestworker Alliance (NGA) at an International Labour Organization (ILO) conference in Geneva on global supply-chain labor.

The maritime industry has always been awash in labor abuse. Neoliberal trade winds and labor migration have driven transnational exploitation, while rising seafood consumption has made it one of the world’s most profitable, and dangerous, commodities.

Seafood production runs on a churning surplus of precarious, “contingent” migrant labor. It often starts on Southeast Asian coastlines, where seafood exports, according to media and official investigations, are fueling a smuggling trade that channels workers into extreme violence and exploitation. Migrants “as young as 15 years old…may be trafficked across borders and forced to work aboard ships,” according to researchers. “They typically do not speak the language of their Thai captains, do not know how to swim and are therefore entirely captive.” In processing and distribution onshore, gender segmentation of the workforce maximizes vulnerability (sexual harassment and piecework wages for women, brutal debt bondage in captivity for men).

Even in the US, unregulated processors traffic in human chattel as fluidly as they trade in fancy seafood. Though processors use both documented and undocumented workers, all migrants typically suffer devastating poverty and discrimination, isolated by “gender, linguistic isolation, geographic isolation, race,” and immigration status.

Facing constant threat of deportation and abuse, migrants are often too fearful to stand up to the boss to ask for bathroom breaks at work, let alone to demand a living wage. This industrial structure prevents workers from organizing to establish their rights, and their unstable domicile prevents them from building workplace and community links that have historically been integral to growing labor power.

In New Bedford, Massachusetts, where previously unionized processing jobs have evaporated amid the globalization of the seafood trade, an estimated three-quarters of the workforce today is undocumented, mostly Guatemalan migrants.

Mirna Elizabeth Pacaha Batz, a Guatemalan-Mayan worker, tells The Nation that she has witnessed “a lot of discrimination, exploitation…sexual abuse” at her former workplace, a processing plant associated with Atlantic Capes Fisheries. Workers have been organizing to improve labor conditions for months, protesting exploitative and unsafe conditions. About 150 workers shared two toilets and sometimes ate on the floor, Batz recalls, and regularly faced a supervisor who “likes to sexually assault women. But many don’t dare speak out.”

Workers have launched a lawsuit over wage violations, targeting the staffing agency connecting them to the processor, along with a separate federal claim over sexual abuse. Batz and about 11 coworkers have since been allegedly fired in retaliation for their protests, prompting a pending National Labor Relations Board complaint. (Atlantic Capes has not returned a media inquiry, but the companies have publicly denied the allegations.)

In the Louisiana Gulf, guestworkers are imported yearly on “guest worker” visas known as H-2B, recruited by loosely regulated, family-run firms that supply big brands, including Walmart. The visa program has drawn regulatory scrutiny over rampant abuses, including mass wage theft, debt bondage, and safety violations that have gotten some workers ensnared and killed in machines. The Labor Department recently moved to tighten regulations on labor agencies and subcontractors. But in 2015, powerful industry lobbyists pressured Congress to thwart the planned reforms.

Mexican Gulf Coast guest worker Olivia Guzman Garfias testified in the report about spending years “working under the constant threat of firing, deportation and blacklisting.” Her managers “threatened us with calling immigration when we complained. Hours were long, wages were bad, housing was terrible—but we were all afraid that if we spoke up, we would lose our jobs, our housing and our ability to ever come back to the US to work.”

Guzman and coworkers began organizing with NGA several years ago to push for humane working conditions. But she alleges she was soon blacklisted by her employer, prompting a protracted legal battle at the National Labor Relations Board.

Public consciousness about food-chain labor issues has grown over the years. However, NGA observes, “consumer demand has come to include traceability, safety and health” but “not extended to ensuring that fair labour practices are maintained through all stages of production, processing and distribution.”

Still, workers are taking the lead by organizing with unions and grassroots worker centers and crystallizing a global community of labor. In New Bedford, Mirna is campaigning with the NGA-affiliated migrant-advocacy group Centro Comunitario de Trabajadores to stop abuse on the job and build alliances with other local processing workers:

It’s a question of organizing the workers…so that the companies can understand that workers are not alone, they also have rights to fight for what they deserve…. And putting our part forward, we can combat it, but it’s a question of uniting the institutions.

In Thailand, police crackdowns have targeted some trafficking operatives. And some US migrant-worker groups have taken legal action over wage theft and workplace injuries. But the entire value chain requires a sea change, to elevate workers’ dignity above profit and provide migrants alternative ways to secure decent work. There have been promising small-scale efforts in Asia to reduce exploitative subcontracting by encouraging contracting transparency and shifting toward in-house processing work, but they lack industry-wide contractual commitments to compel exporters to support higher-road jobs that uphold international human-rights standards.

NGA calls for a transnational regulatory system to oversee the whole value chain. “To reverse a race to the bottom, there must be corporate accountability that crosses borders,” says NGA Legal Director Jennifer Rosenbaum via e-mail.

Parallel to Asia Floor Wage Alliance’s proposal for a global garment-sector oversight structure, NGA seeks to consolidate trade, labor, and migrant rights under an integrated ethical framework to prevent the commercial and legal arbitrage that enables multinationals to flout basic labor standards—and to tackle abuse and corruption on any shore. Because, like the oceans, rights transcend borders.