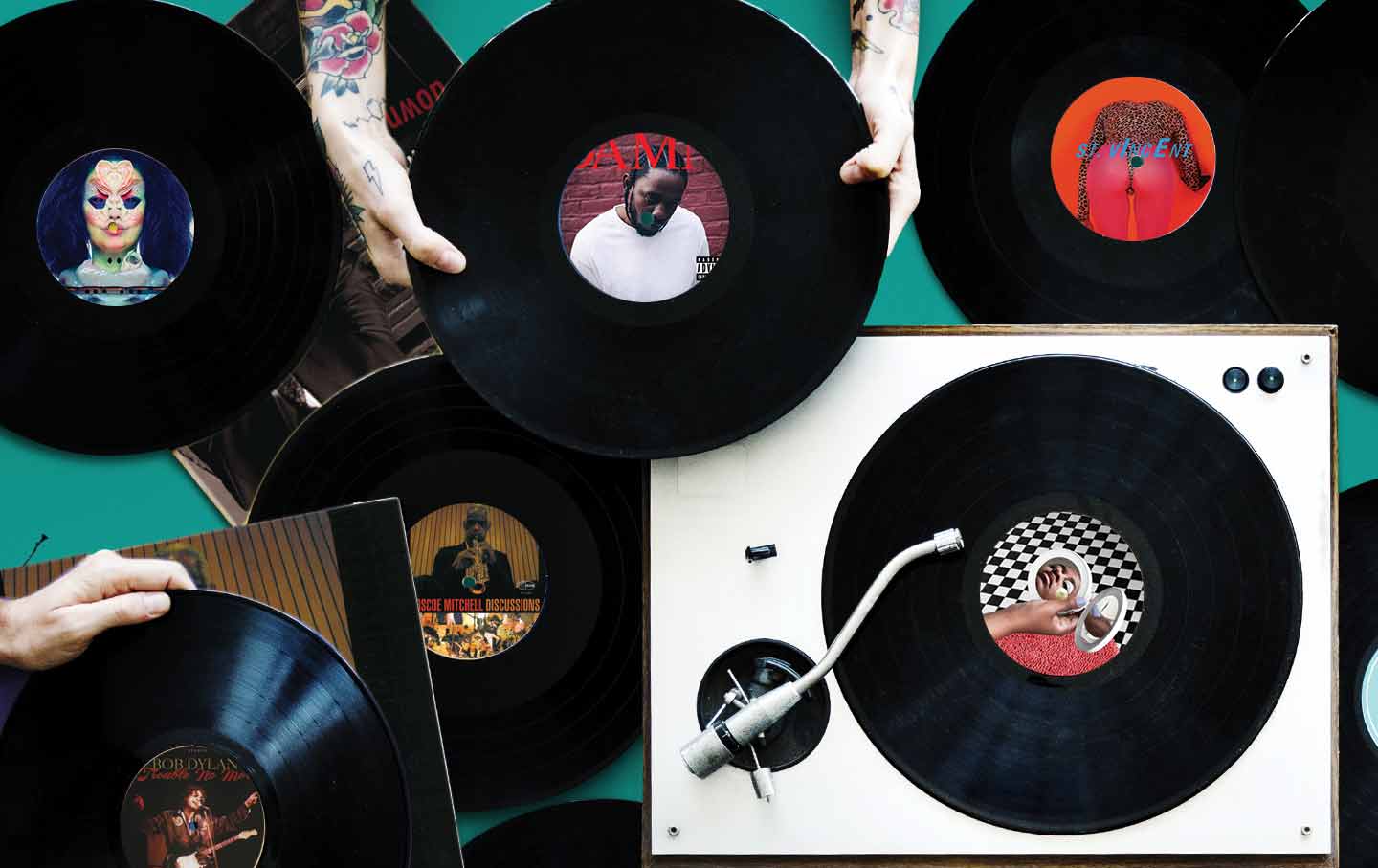 The world can thank musicians—composers, singers, instrumentalists, and producers in the varied spheres of music-making—for providing a chance to shout out something I never expected to say about 2017: It was a great year! There were more recordings of exceptional quality than I can recall hearing in 12 months’ time since the mid-1990s, when pop and jazz and formal music were all undergoing dynamic shifts. This year, no common thread unifies all the albums of high quality, except for the obvious fact that they were created (or released) at a time of profound anxiety, looming danger, and enveloping ugliness. While some releases, such as Kendrick Lamar’s DAMN., address the state of contemporary affairs squarely, others, such as Alex Mincek’s Torrents and Tyshawn Sorey’s Verisimilitude, work more obliquely. Others still, such as Uptown, Downtown by the Bill Charlap Trio, offer stimulating respite; and one, the multi-album set of concert recording from Bob Dylan’s evangelical period, provides both the threat of hellfire and the promise of better days to come.

The best of the best albums of this year are so good that I wouldn’t be able to defend ranking them. Here are my picks, listed alphabetically by title:

The Ascent of the Equestrian in a Balloon, Stephen Hartke

Four pieces, including the title work, by a serious composer unafraid to be unserious, performed by the Boston Modern Orchestra Project under the direction of Gil Rose. Hartke’s quirky, arabesque music stretches the ears, but in a healthy way—without making them bleed in the process.

Dylan has never expressed himself with much more clarity and fervor than during his years of identification with born-again Christianity. Live concert music from this period, issued in four iterations (a two-CD edition, a four-LP edition, a boxed set with eight CDs and one DVD, and a Limited Edition with 10 CDs and a DVD).

Jazz and pop standards (and some comparably fine originals) sung by an artist with so fresh a point of view that her singing amounts to a kind of re-writing.

One of the best-selling albums of the year is, coincidentally, one of the best. Sound reduced to hip-hop essence, raps of fiery intelligence. (Read Marcus J. Moore’s review of DAMN.)

A majestic hybrid of free improvisation and symphonic music, performed by the ever-fierce old lion of the jazz avant-garde and a 19-piece orchestra.

Brainy, tuneful ruminations on her own life, and ours, by a songwriter of consistent greatness, made with help from the pop life-coach Jack Antonoff. (Read my full review of Masseducation.)

Meticulous, highly structured music disguised as chaos. Atomized and unsettling, this is the sound of our day, performed by members of the Wet Ink ensemble, the Mivos Quartet, and other new-music adventurers.

How can one of the most successful jazz pianists alive also be one of the most under-appreciated? Few jazz musicians have ever penetrated their material as deeply as Charlap does in this smartly mixed program of little-heard delights (the title song by Stephen Sondheim, from Follies, and Gigi Gryce’s “Satellite”) and standards.

Pastoral music as unforgiving and bleak as the glaciers of Björk’s native Iceland. Much (but not all) of this classically tinged, quasi-ambient art pop was made with the Venezuelan producer Arca, who contributed to Björk’s last album, and the partnership has given Björk two works roughly comparable to the classic Eno-Bowie collaborations.

An album by a jazz trio (Sorey on drums, Corey Smythe on piano, and Chris Tordini) that defies the conventions of jazz-trio music. What was composed and what was improvised? Sorey says, musically: Who cares? (Read my essay on Sorey and the new sites of jazz education.)

And since there were so many excellent albums released in 2017, here are four more, which are worthy of special mention:

Brooding, mournful vocal music—much of it abstract, with no words—by a vocalist who sounds like no other, with guitarist Ben Monder and drummer John Hollenbeck.

Virtuoso vocal electronica by the duo of Ted Hearne and Philip White.