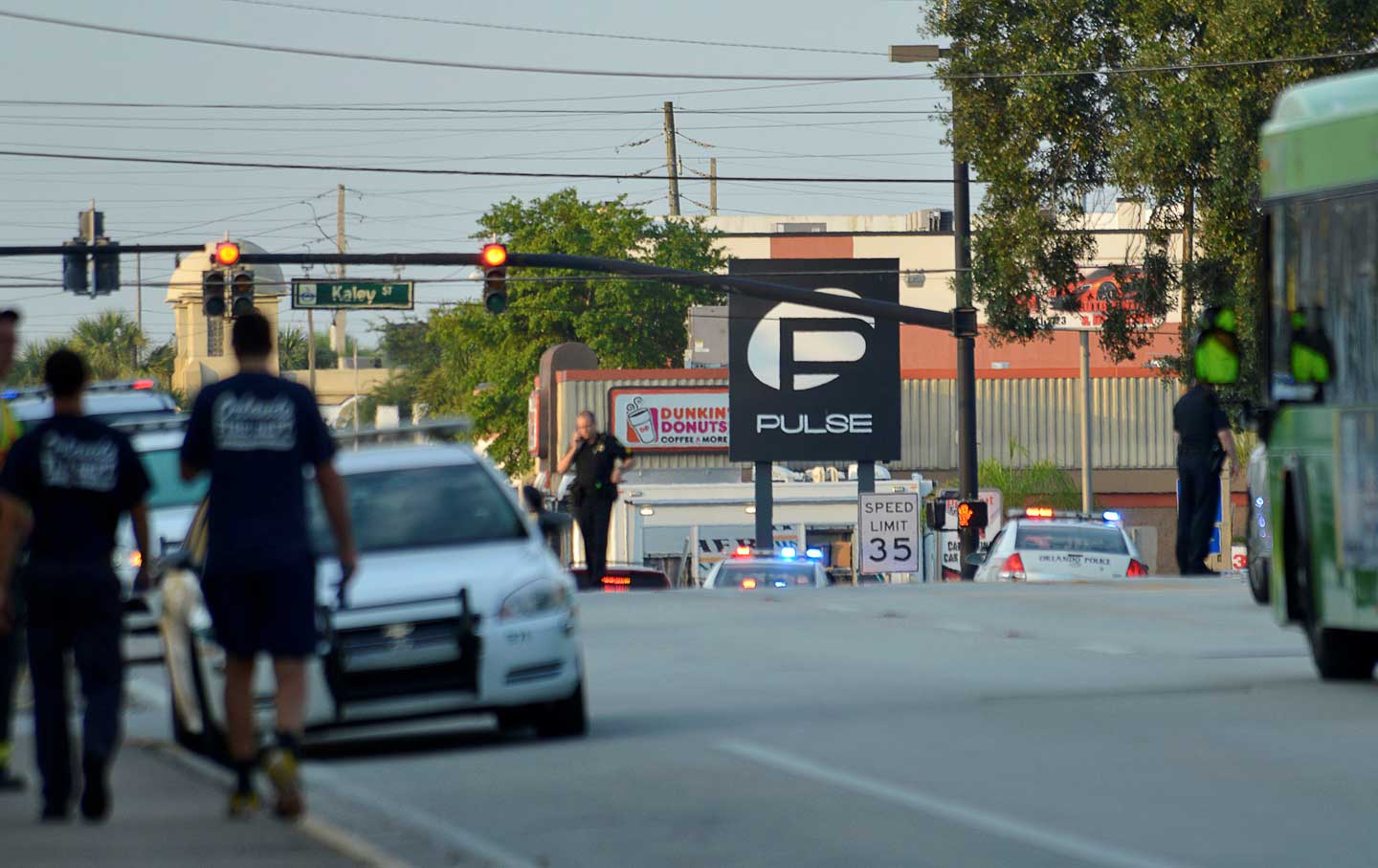 Police lock down Orange Avenue around Pulse nightclub, where people were killed by a gunman, in Orlando, Florida, on June 12, 2016. (Reuters / Kevin Kolczynski)

After the Orlando massacre, everyone’s talking about “security”—but what does the word really mean? Is security more police on the streets? A bigger “watchlist”? Or is it a place to dance like nobody’s watching, a space of social inclusion? Is it a safe place secured by armed guards, or a place to let your guard down?

For the communities directly impacted by the Orlando massacre, the terror is now echoed by louder fears on two fronts: violence stemming from racial and anti-queer hatred on one side, and fear that their victimization will be weaponized by the institutions that purport to protect them.

Devotees remember Pulse as a miraculous sanctuary from both those terrors: a space to resist by affirming queer visibility. Founded as a haven borne of a health crisis, it was where revelers could escape, but never cower from social hostility.

Pulse has been stolen from Orlando’s LGBTQ community. Yet their vulnerability today is underscored by a rising national-security panic, coupled with the city’s grim police misconduct track record and widespread impoverishment—which risk further alienating the victimized communities and rendering their identities, and shared pain, invisible.

For those of us who are LGBTQ and Muslim, we wait to see which of our identities we will be more fearful of disclosing in a world that questions our existence and intentions daily. We have found no contradiction in being both queer and Muslim, and reject the popular narrative that Islam or the Muslim community as a whole is homophobic and transphobic. We are proud to be both queer and Muslim, and cherish both of our communities….In the next few weeks, we must resist the inevitable, racist attempts to divide and conquer us. We ask that…we intentionally create systems and spaces where all members of our community feel secure, safe, and able to be their full selves.

A few weeks before the massacre, activists gathered in community forums in various cities to discuss perspectives on what society calls “security.” The #RedefineSecurity Week of Action began a public dialogue within the community for queer and trans people who face oppressive policing while struggling with internal rifts around gender and sexuality in their home communities. Activists called for policy overhauls, including dismantling the airport security agency and an absolute ban on profiling, by race, ethnicity, and national origin, along with gender identity and sexual orientation (authorities claim to be addressing profiling, but may still regularly deploy it in “border security” and “counterterrorism” actions). Claiming pride to counter stigma, they talked about how the regime of “Homeland Security” traps their communities in a constant state of terror.

The conversation may seem worlds away from Pulse’s dancefloor. But the bullets that stopped the music also punctured a sacred sphere, where defying convention wasn’t just safe to do but celebrated; such cultural experiences, even when the freedom is contained within a single nightspot, embody a radical answer to the mainstream “national security” discourse.

For many people of color, Muslims, migrants and other “undesirables,” social exclusion occurs quietly in public places like airports and courtrooms—spaces saturated with the trappings of “security,” yet deeply invasive for subjects of government suspicion.

“The more of these marginalized and policed identities that somebody holds, the more vulnerable they are to this kind of violence,” says NQAPIA organizing director Sasha W. “The combination of those different identities means that people are targeted more, and have less of a chance of being able to push back against the systems that are policing us.”

In the #RedefineSecurity dialogues, people spoke of haunting encounters with official security institutions. When police routinely apprehend a Pacific Islander trans woman on the baseless suspicion of being a sex worker, W. says, the question arises, “Why am I seen as a target, why am I seen as a threat, when the people who routinely threaten my life are allowed to just walk freely?”

W., whose gender presentation doesn’t “match” what appears on a body scanner at the airport, recalls being subjected to invasive inspection and, on top of the frustrating misidentification, “because I am brown, because I am South Asian, I’m assumed to be more threatening. And so the process takes longer.”

In the wake of the Pulse killings, activists working at the intersection of LGBTQ and racial-justice issues face heightened challenges, dealing with hate-driven violence from peers, militarized police patrols, and the internal burden of fostering inclusion within traditional parent communities that are themselves dealing with massive institutional discrimination.

In last month’s Redefine Security dialogues, advocates voiced fresh ideas for changing the way law enforcement operates, including a community-driven accountability process to check police abuses of power when individuals are unjustly profiled. And, linking criminalization via policing to securitized violence at the border, activists also demand that any detention and deportation orders resulting from inappropriate profiling be invalidated.

One radical proposal was to work toward “a world where we don’t have police and don’t have prisons.” The prospect may sound unfathomable, but, W. argues, truly redefining security requires “Dismantling some of the systems that we know are causing us harm, and then also doing…massive amounts of cultural work in our own communities well as in the world at large, so that queer and trans people can navigate the world safely.”

Pulse set the rhythm by which Orlando’s queer folks navigated a world that was out of step with their identities. It provided cultural armor that embraced and protected them when others wouldn’t—so the community could move in a united front against injustice. It’s a foundation that must be restored.