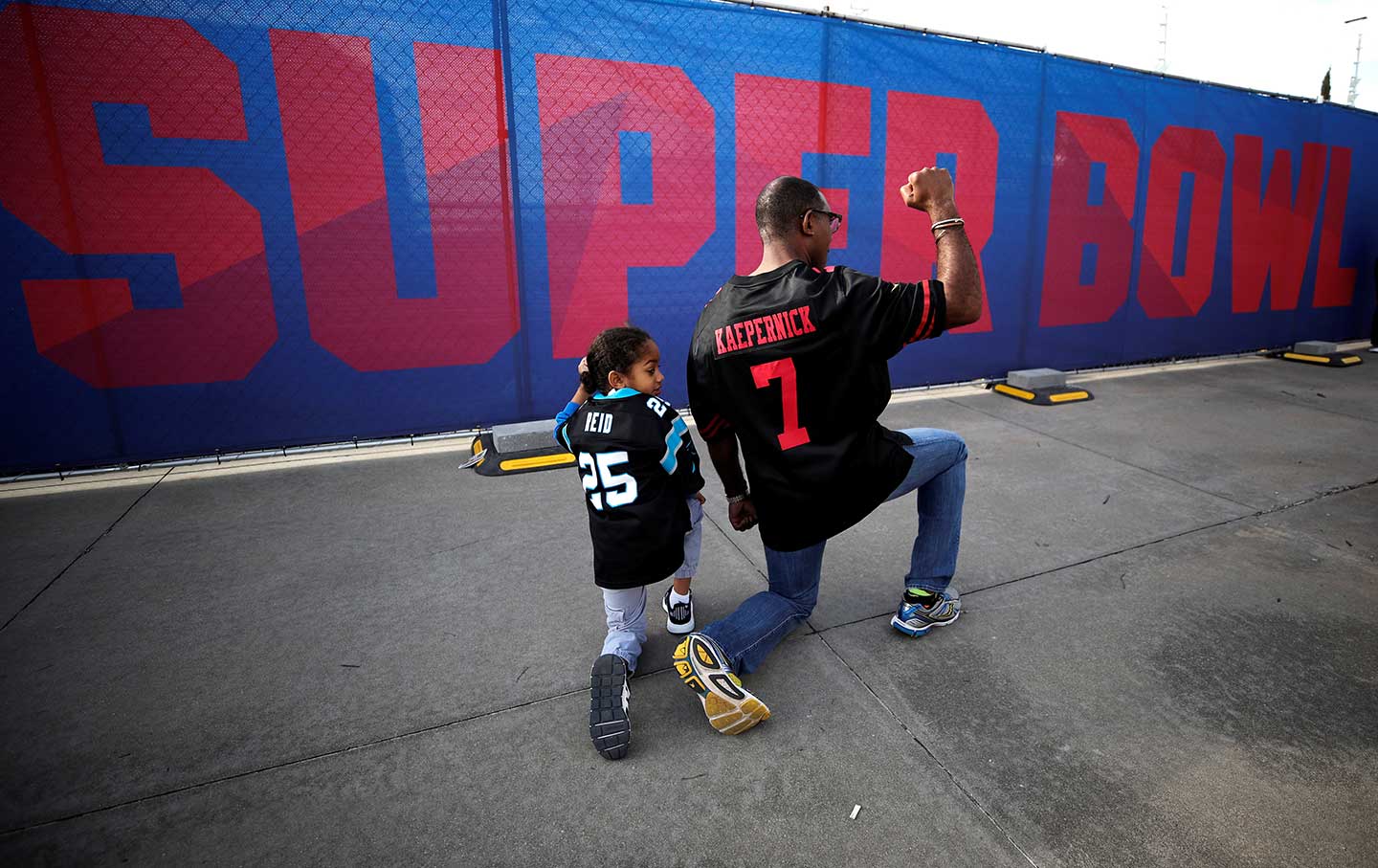 Anar Kahn from Atlanta, Georgia, kneels with his son while wearing a Colin Kaepernick football jersey outside Mercedes Benz Stadium ahead of Super Bowl LIII in Atlanta on February 2, 2019. (Reuters / Mike Segar)

The tension was remarkable. The emotion was undeniable. The culmination was exceptional. And it was watched by millions. No, I’m not talking about the Super Bowl, which was a dreary dud of an affair. This is all about the 60-second ad for The Washington Post, aired during the big game, that ends with the tagline, Democracy Dies in Darkness. In one minute, by juxtaposing images of war, protest, triumph, and tragedy, the ad makers wrung more sentiment out of their audience than either the New England Patriots or the Los Angeles Rams did. The last shot was a photograph of Washington Post journalist Jamal Khashoggi, who was tortured and killed in the Saudi Arabian consulate in Istanbul, Turkey. The image sent shivers down the spines of anyone who is not an avowed apologist for Saudi Arabia or the Trump administration. True to form, Donald Trump Jr. responded to the ad with an embarrassingly infantile Twitter tantrum.

For those who missed the game, you truly did not miss much. It ended with the dynastic Patriots winning their sixth Super Bowl in nine appearances since 2002. The final tally was 13-3, the lowest-scoring Super Bowl in NFL history. Even that score belies just how boring a contest the big game was. It was not a battle of dominant defenses making heroic plays. It was instead an exercise in uncreative play calling, short incomplete passes, and a tedious absence of action. Patriots coach Bill Belichick turned the game into a stultifying slog, with both teams playing, in the words of comedy writer Jess Dwyck, “like they know whoever wins goes to the White House.”

If anything, there was far more anticipation during the broadcast of the halftime show, where people wondered if the artists Maroon 5, Travis Scott, or Big Boi would acknowledge the long shadow of Colin Kaepernick, and the fact that a ream of top performers refused to play the halftime festivities in protest of how the league has colluded against the quarterback. (Maroon 5 and company didn’t do anything political, instead settling for playing music so formulaic, Atlantic sportswriter Jemele Hill wondered if the performances had been gentrified.)

Beyond the game and the clunker of a halftime show, there was far greater drama in the suspicious vandalism of a mural of Colin Kaepernick which was located in the shadow of Atlanta’s Super Bowl stadium. Today, according to David Dennis Jr., seven new murals of Kaepernick will be painted across the city in protest.

There was also much more drama in seeing the athletes and artists who posed on social media wearing Kaepernick jerseys in an anti-–Super Bowl showing of dissent, including LeBron James, Steph Curry, Kevin Durant, Dr. John Carlos and Angela Davis. This movement to not watch the Super Bowl in solidarity with Kaepernick was accompanied by a short video from director Ava DuVernay about why she was boycotting the big game. The video, which has been watched by over 2 million people, is set to a two-minute slam poem that eviscerates the racial hypocrisy of a league that wants black athletes to be seen and not heard.

Those who made this choice to boycott the game really did not lose out on much. They missed seeing an alleged offensive guru, Los Angeles Rams head coach Sean McVay, execute his game plan like a deer in the proverbial headlights, his team held to a mere field goal. We saw his young quarterback Jared Goff look even more bewildered than his coach. We saw 41-year-old Tom Brady of the Patriots look his age, but at least he was calm enough to help his team eke out a victory that was about as entertaining as watching soup cool.

Democracy may die in darkness, but this is a Super Bowl that perished under the blaring hot lights. It was an eminently forgettable experience that it all likelihood will be remembered more for that one Washington Post commercial as well as for the people who publicly and proudly decided that in the name of racial justice, they were just going to turn the channel.