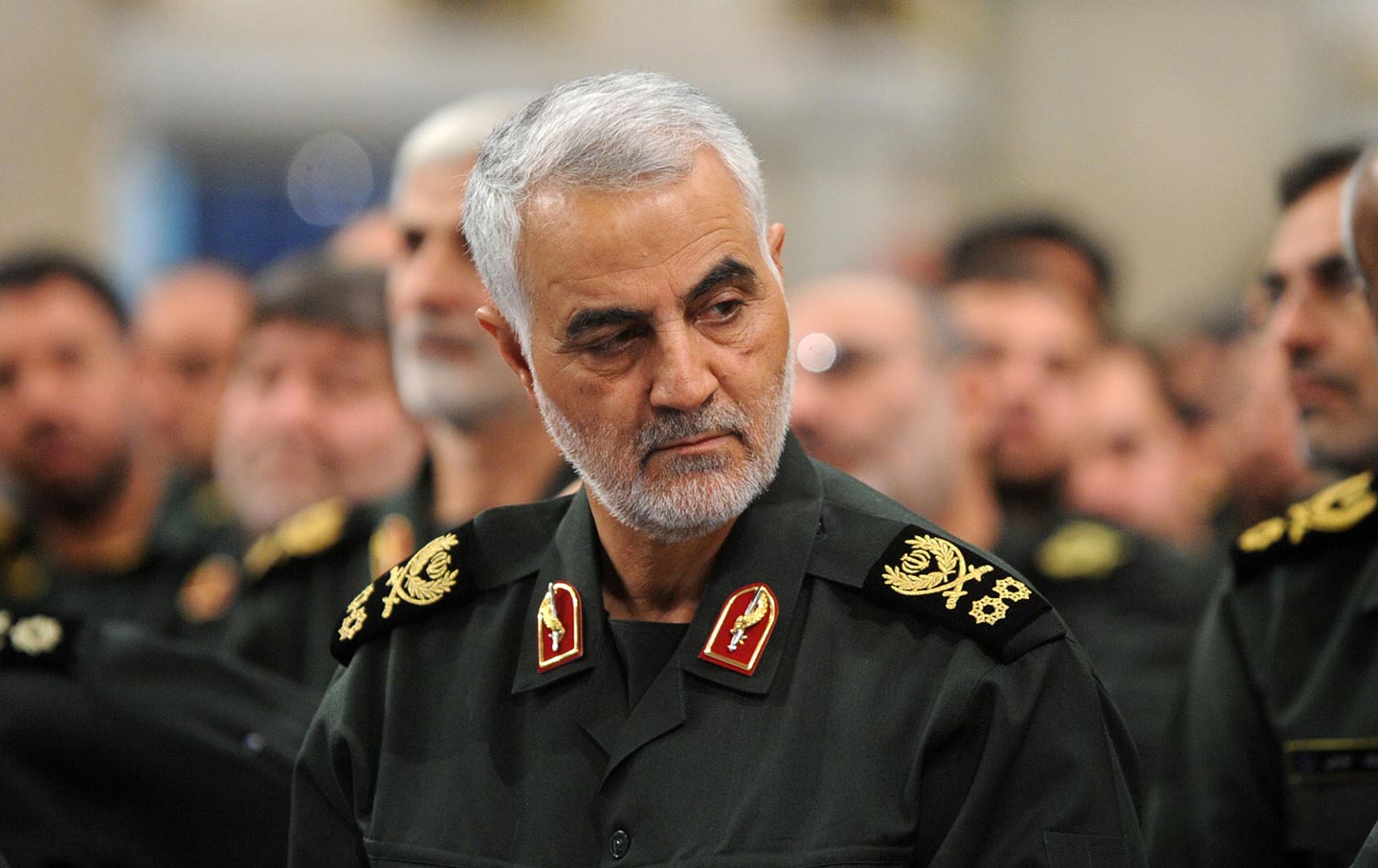 On Friday morning in Baghdad, American military forces, under the order of Donald Trump, launched an air strike assassinating Maj. Gen. Qassim Suleimani, a commander in Iran’s Revolutionary Guard Corps who has long been a thorn in the side of American forces in the Middle East. The killing of Suleimani, a popular figure in Iran, has been described as a major escalation in hostilities between the United States and the Islamic Republic. But that’s an understatement. As Andrew Exum, former deputy assistant secretary of defense for Middle East policy, wrote in The Atlantic, “This doesn’t mean war, it will not lead to war, and it doesn’t risk war. None of that. It is war.” It’s unclear how Iran will retaliate, but an intensification of hostilities is almost a certainty.

If Exum is right and the United States is already in a de facto war with Iran, this is a strange conflict. This is a war fought not over natural resources or ideology but rather motivated by petty grievances, with Trump goaded into action by a wounded ego.

The timing of the assassination, coming so soon on the heels of the impeachment, has raised suspicions that Trump is trying to stir up conflict in order distract attention from his political troubles. It’s plausible enough that impeachment played a factor in triggering Trump’s actions, but his conflict with Iran goes back further. The pivotal date is 2017 and the decision to withdraw from the Iran nuclear deal. Since that move, the Trump administration has pursued a punitive policy of “maximum pressure” on Iran that has lead inexorably to a cascading cycle of tit-for-tat retaliations. As the United States has ramped up pressure on Iran with sanctions and bombings, the Islamic Republic has responded with attacks on American allies and personnel.

Writing in The Atlantic, Peter Beinart usefully noted that Trump has displayed contradictory attitudes towards Iran, with bombastic chest-beating tempered by a desire to avoid another full-scale Middle Eastern war. While Trump does have hawks around him who seem eager for armed conflict with Iran, Trump himself has hesitated to pull the trigger. As Beinart points out, “with each escalation, Trump’s predicament worsens. His confidants insist that he can’t afford a war—which would likely boost oil prices and damage the economy—especially in an election year. Yet he also can’t pursue real diplomacy, at least not without provoking a confrontation with the GOP’s hawkish foreign-policy elite. He’s caught between his desire to avoid being like George W. Bush and his desire to avoid being like Barack Obama.”

Unable to resolve the contradiction between his instincts to avoid a war and his need to present himself as a tough guy to his Republican followers, Trump has settled for turning Iran policy into a personal vendetta. This was on full display in the Twitter argument Trump had with Iranian Supreme Leader Ayatollah Ali Khamenei. Responding to an earlier Trump tweet threatening Iran, Khamenei tweeted on Wednesday, “If the Islamic Republic decides to challenge & fight, it will do so unequivocally. We’re not after wars, but we strongly defend the Iranian nation’s interests, dignity, & glory. If anyone threatens that, we will unhesitatingly confront & strike them.”

Trump seems to have no plan—to just react to events in an ad hoc way. Wendy Sherman, a former ambassador who negotiated with Iran on nuclear weapons, said on MSNBC on Thursday night, “I pray with all of my heart that the Trump administration has a plan and a strategy, but all I have seen to date…is one-off actions and this one-off action can have unbelievably horrific consequences.” This lack of planning is a natural outgrowth of the Trump White House’s inability to hire and retain experts. As Ben Denison of Tuft University’s Center for Strategic Studies notes, “Sadly, the purging of Iranian expertise in the State Dept, DoD, and the NSC makes it even more likely that we do not have the understanding of Iranian dynamics to understand what will come next.”

Beyond the incompetence and staffing disorder of the Trump administration, the larger problem is that there has been no effective move by Congress to rein in Trump’s careening foreign policy. A president shouldn’t be able to launch an attack that is an act of war without congressional authorization. Apart from a brief discussion with Lindsey Graham at Mar-a-Lago, it seems Trump didn’t notify anyone else in Congress ahead of time.

Trump’s petty motives and incoherent policy have been enabled by a Congress that has long been derelict in its duty to provide oversight over foreign policy. This abdication of responsibility is all too typical of American politics since the 9/11 terrorist attacks—under both Democratic and Republican presidents.

There is concern about the turn to war even among Republicans, at least privately. According to Washington Post reporter Robert Costa, “Some of my best Hill sources tonight tell me there is very little to no appetite inside GOP for attacking Iran in Iran, but support for taking steps to protect embassy in Baghdad as long as intel is solid. Emphasis on securing compound, stability. Uneasiness tho about POTUS.” But these Republicans are speaking to Costa only off the record.

The question is whether Congress can find the will to put the brakes on Trump’s Iran policy, which has created a de facto state of war that can easily spiral into a large-scale disaster. Perhaps one possible blessing of Trump’s presidency is that he’s so reckless he might force even a feckless Congress to do its duty.