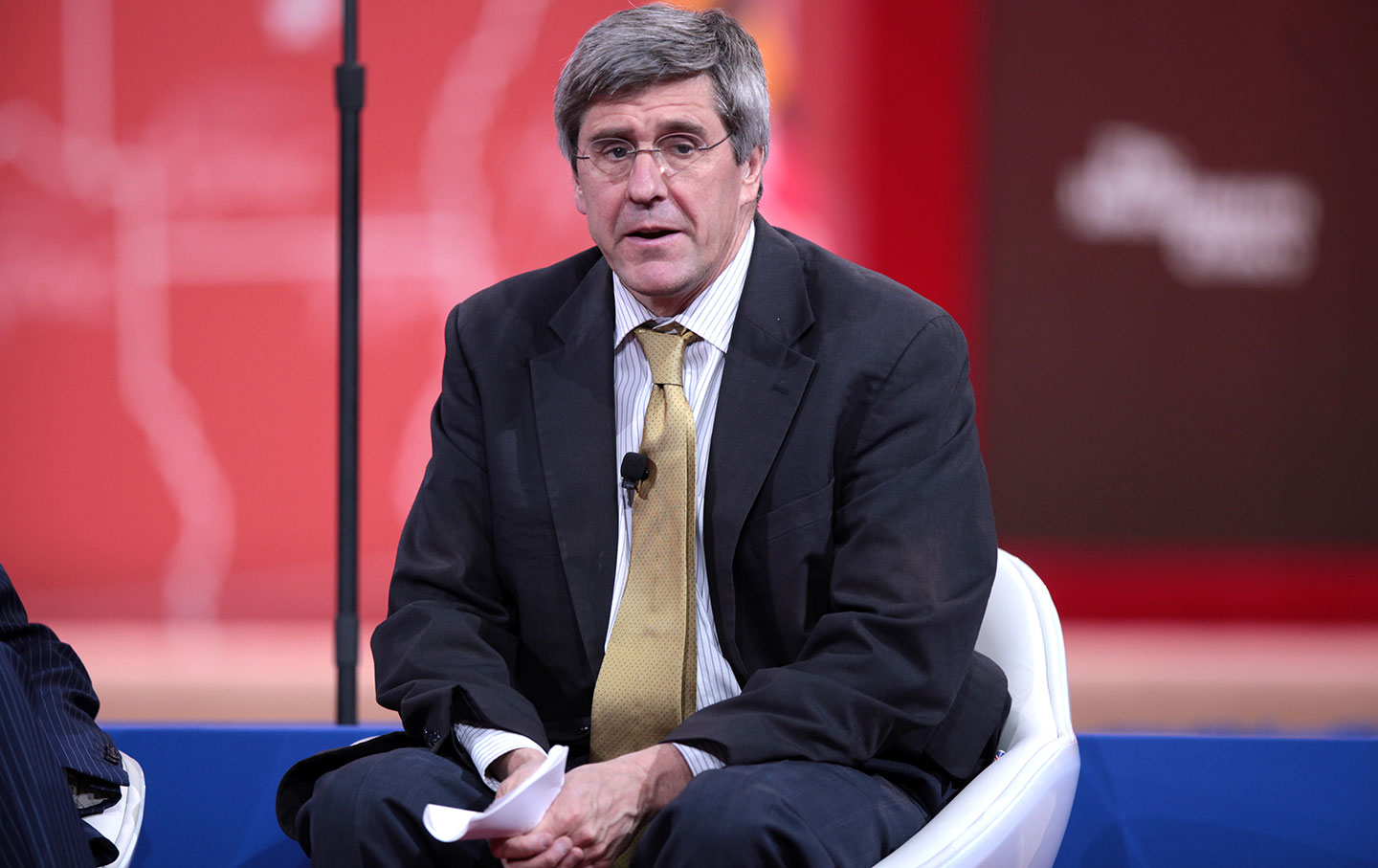 Stephen Moore, Donald Trump’s nominee to serve on the Federal Reserve Board, is more than a particularly slavish Trump-world sycophant. He’s a flaming bag of sexist trash. This is not my opinion. It’s a simple summary of Moore’s writing in conservative media over the last two decades. The embarrassingly unqualified economist has written “hot takes” about women having too much power and visibility and the effect that has on young boys.

In 2000, he wrote about college life and concerns about sexual assault on campuses with the following pithy observation: “The women seemed to survive just fine. If they were so oppressed and offended by drunken, lustful frat boys, why is it that on Friday nights they showed up in droves in tight skirts to the keg parties?”

But it’s his writing about sports that has provided Moore with his most irresistible platform to go full bigot. Among his more noxious comments, as reported by Andrew Kaczynski and Paul LeBlanc at CNN, Moore wrote in 2002, “Here’s the rule change I propose: No more women refs, no women announcers, no women beer venders, no women anything. There is, of course, an exception to this rule. Women are permitted to participate, if and only if, they look like [sports reporter] Bonnie Bernstein. The fact that Bonnie knows nothing about basketball is entirely irrelevant.” He advised in a later column that Bernstein, one of the most respected announcers in sports journalism, should only be allowed to do her job if wearing a halter top.

He also raged against the idea of a woman reffing a men’s basketball game, writing:

How outrageous is this?… Liberals celebrate this breakthrough as a triumph for gender equity. The NCAA has been touting this as example of how progressive they are. I see it as an obscenity. Is there no area in life where men can take vacation from women? What’s next? Women invited to bachelor parties? Women in combat? (Oh yeah, they’ve done that already.) Why can’t women ref the women’s games and men the men’s games. I can’t wait to see the first lady ref have a run in with Bobby Knight.

(Bob Knight, he of the rampant bullying and rape jokes, is Moore’s exemplar of a kind of masculinity that would put women in their place.)

Moore also fancies himself an expert on “the feminization of basketball,” writing:

And while I’m venting on the subject, here’s another travesty: in playground games and rec leagues these days, women now feel free to play with the men—uninvited in almost every case. There’s no joy in dunking over a girl. Never mind that I can’t dunk (except on the eight-foot baskets). If I could, I wouldn’t celebrate dunking over someone named Tina.

Moore also railed against women’s tennis with some of the mustiest arguments imaginable. He writes:

The women tennis pros don’t really want equal pay for equal work. They want equal pay for inferior work. There’s a very practical reason why Pete Sampras, for example, makes a lot more money than Martina Hingis does. He’s much, much better than she is. The day that Martina can return Pete’s serve is the day she should get paid what he does. If there is an injustice in tennis, it’s that women like Martina Hingis and Monica Seles make millions of dollars a year, even though there are hundreds of men at the collegiate level (assuming their schools haven’t dropped the sport) who could beat them handily. Yet these men make nothing. Venus Williams is a multi-millionaire not in spite of the fact that she is a woman, but precisely because she’s a woman. She receives much higher pay than an equally skilled man. Isn’t that precisely the opposite of what is meant by pay equity?

Moore’s response to the surfacing of this work was to say, against all evidence to the contrary, “I have a sense of humor.” This is probably a smart play, since the only response that would probably offend Trump would be if Moore apologized. But this is not just about sports.

Talking to the Chicago Tribune, sports-radio host Julie DiCaro—one of the few women in the country to host a show on terrestrial sports radio—said the following about Moore’s comments:

It always seems to come down to this idea that men have a proprietary interest in sports that women don’t have. As if we aren’t the daughters of Title IX. As if some of my earliest memories aren’t sitting on my dad’s lap watching the Bears and Cubs, just like theirs. For too long, college and pro sports were exclusively the province of white men, and I think we’re still dealing with the fallout from that. But sports belong to all of us. They’re the way we work through so many social issues in American society, and silencing women’s voices in sports silences their voices in the national debate about really important topics, like gender equality, race relations, and a myriad of other issues.

This is exactly right. Moore doesn’t care a whit about sports. This is about intimidating and silencing women in American life, with the kind of sophomoric, bullying threats that would get an 8-year-old punished. He’s Brett Kavanaugh with bifocals. A sane society would consign this mediocrity to the lamest corners of the Internet so he can rage to his heart’s content. Instead, he is rising to power on the backs of the very women that he’s so gleefully stepped upon, to the delight of his orange master in the Oval Office.