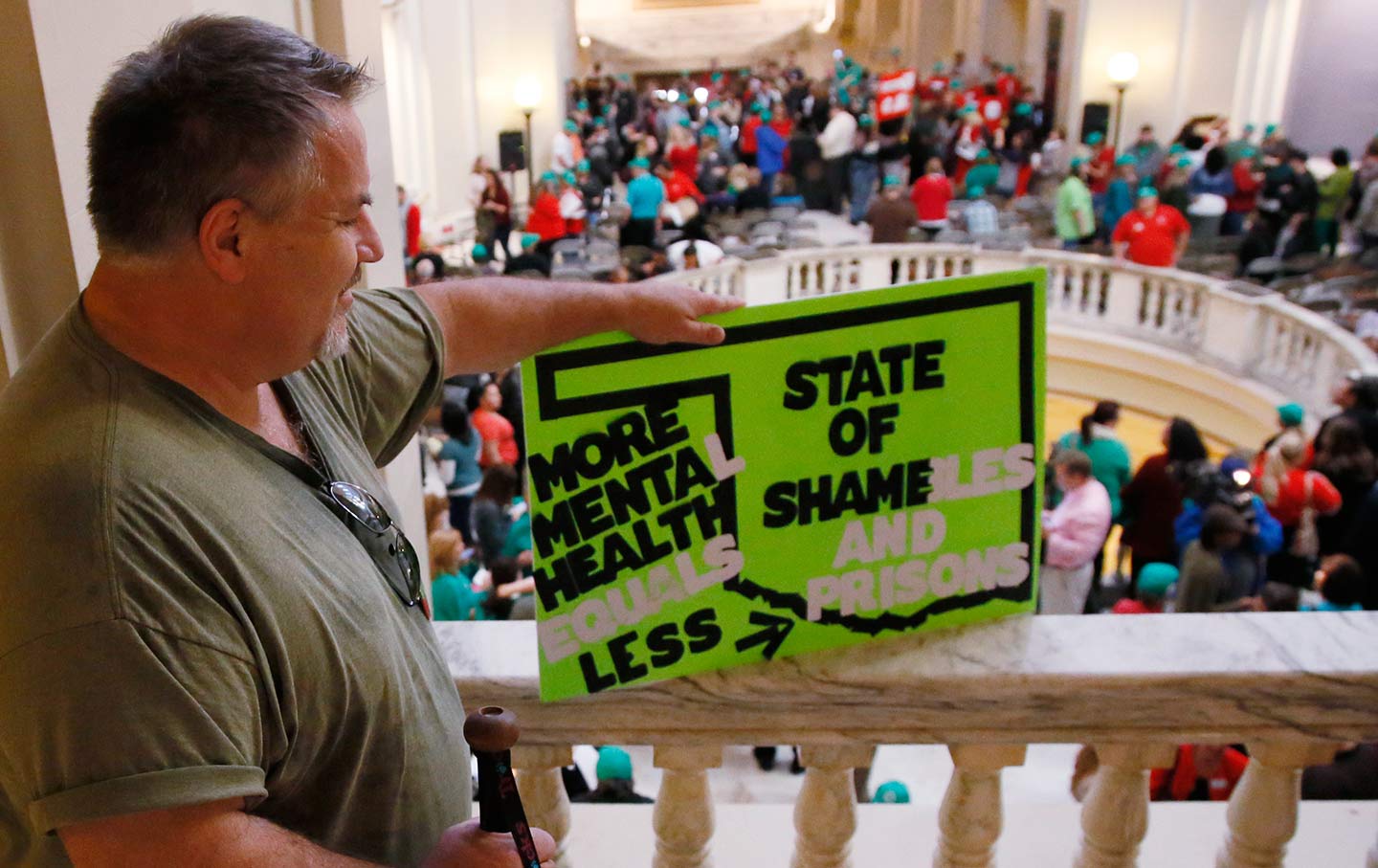 A man holds a sign at the state Capitol as demonstrators protest pending cuts to health and social-services programs in Oklahoma on October 24, 2017. (AP Photo / Sue Ogrocki)

Over the summer I moved from Illinois to Minnesota, in large part because state governments matter for families like mine. My son has Down syndrome, and eventually he’s going to be dependent on a state government. We wanted one that was functional, well-funded, and inclusive. Illinois fails on all three grounds. Good government, especially at the state level, can create the conditions for people with disabilities to live independently and thrive. Bad governments, on the other hand, magnify and intensify vulnerability.

Mostly buried beneath early November’s onslaught of news, stories from Oklahoma, Iowa, and Maine reveal the ways that state governments, through both apparent incompetence and maliciousness, are failing disabled residents and their families. In the first two examples, disability programs are being cut as a result of self-imposed budget crises. In the third, the governor is using disability as a shield to ignore the will of the voters, while at the same time not serving disabled Mainers.

Oklahoma is the worst of the three. At the beginning of November, agencies received letters stating that the “ADvantage Waiver,” a program funding home-based care for disabled individuals and seniors, would lose funding as of December 1. About 21,000 Oklahomans will lose the care that enables them to live independently. About 10,000, according to the Department of Human Services, will be forced to move into nursing homes—except that the state doesn’t have enough beds in nursing homes. So disabled Oklahomans are caught waiting to find out what will happen: Will they be trapped in their homes without services? Will they be forced into nursing homes or Hospitals? Will they be abandoned?

The problem, of course, is money. The conservative state has stripped away its tax base in a wave of Tea Party glee. Now it’s broke and, rather than raise taxes (a budget just failed to pass in special session), it is closing nursing homes and slashing Medicaid. 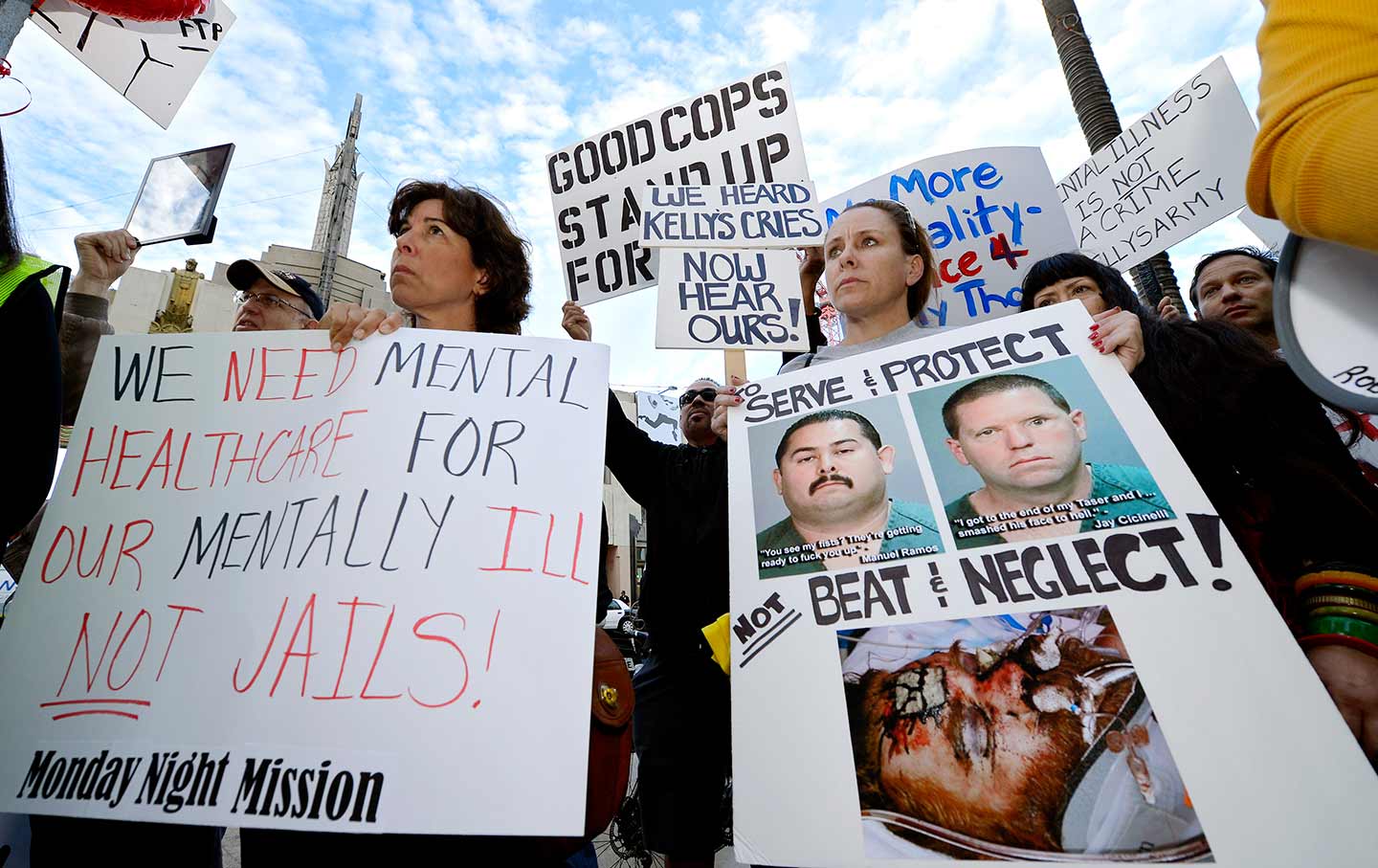 Iowa also has a budget crisis, if a less acute one than in the Sooner state. The state, like most, relies on contracts with private providers to provide services. In order to ease its revenue shortfall, the Department of Health has been trying to lower or hold costs steady. On October 31, the Department of Human Services revealed that AmeriHealth, a giant corporation that ran about 75 percent of the Medicaid services in Iowa, is going to stop working with the state. That’s not good, but the specific problem here is that DHS has known since the end of September and just didn’t tell anyone. Ignoring a problem, it turns out, doesn’t make it go away.

Now the over 215,000 individuals who used AmeriHealth are scrambling. DHS has assured affected Iowans that they will be automatically enrolled into extant programs run by other corporations, but the transition will be abrupt and complicated. Companies like AmeriHealth contract with local providers who actually run services. These providers have contracts with AmeriHealth, but not with the new companies, and now have just weeks to negotiate new contracts. AmeriHealth offered services that the other providers currently don’t, and it’s not easy to scale up so rapidly. The odds of gaps in care for tens of thousands are high. Gaps in care can prove fatal.

Meanwhile, in Maine, voters just resoundingly approved a measure calling for the state to adopt Medicaid expansion under the Affordable Care Act. Governor Paul LePage has refused to act on the expansion, though, saying it would harm disabled Mainers. He said, “The last time Maine experimented with Medicaid expansion it…took resources away from our most vulnerable residents—the elderly and the intellectually and physically disabled.” Trying to use disabled individuals as a shield against providing health care to more people, including people with disabilities who might not qualify under Medicaid otherwise, is bad enough, but LePage has a terrible record on caring for the needs of disabled Mainers. Last August, federal audits and local reporting revealed serious neglect in LePage’s Health and and Human Services. First, the state reduced available care for disabled people in crisis (for when individuals feel they pose a threat to themselves or others). State law mandates the maintenance of “adequate” beds for crisis situations, but when a private contractor withdrew from the system, taking two-thirds of the supply with it, the state did nothing. On the flip side, when disabled Mainers were victims of violence, the state didn’t bother even investigating in a third of the cases.

None of these stories are unique to the three states in question. In many states, especially those now governed under austerity agendas, disability services are always teetering on the edge of being cut.

Disabled individuals and those who care for them are constantly being forced into exhausting battles just to cling to the bare minimum of supports. We saw that all summer as ADAPT and other disability-rights groups fought to save Medicaid at the federal level in DC. But it’s the states that actually run and provide the services, and the systems of administration and distribution of care are collapsing across the country. These looming health crises are, moreover, self-inflicted by failing and flailing state governments.

Good government matters. It matters for individuals who depend on state programs. It matters when state agencies can’t manage partnerships with corporate entities. It matters because a well-run state can maximize autonomy, agency, and independence. When states can’t fund and manage programs or communicate changes to residents, the harms spread quickly through large swaths of the population.

There are going to be 200,000 Iowans thrown into new programs. Seventy thousand Mainers are waiting for Medicaid. Ten thousand Oklahomans are terrified of being forced into nursing homes. We cannot allow our states to fail those for whom effective state government is the only answer. In their frenzy over tax cuts and austerity, too many state governments are betraying the people they were elected to serve.