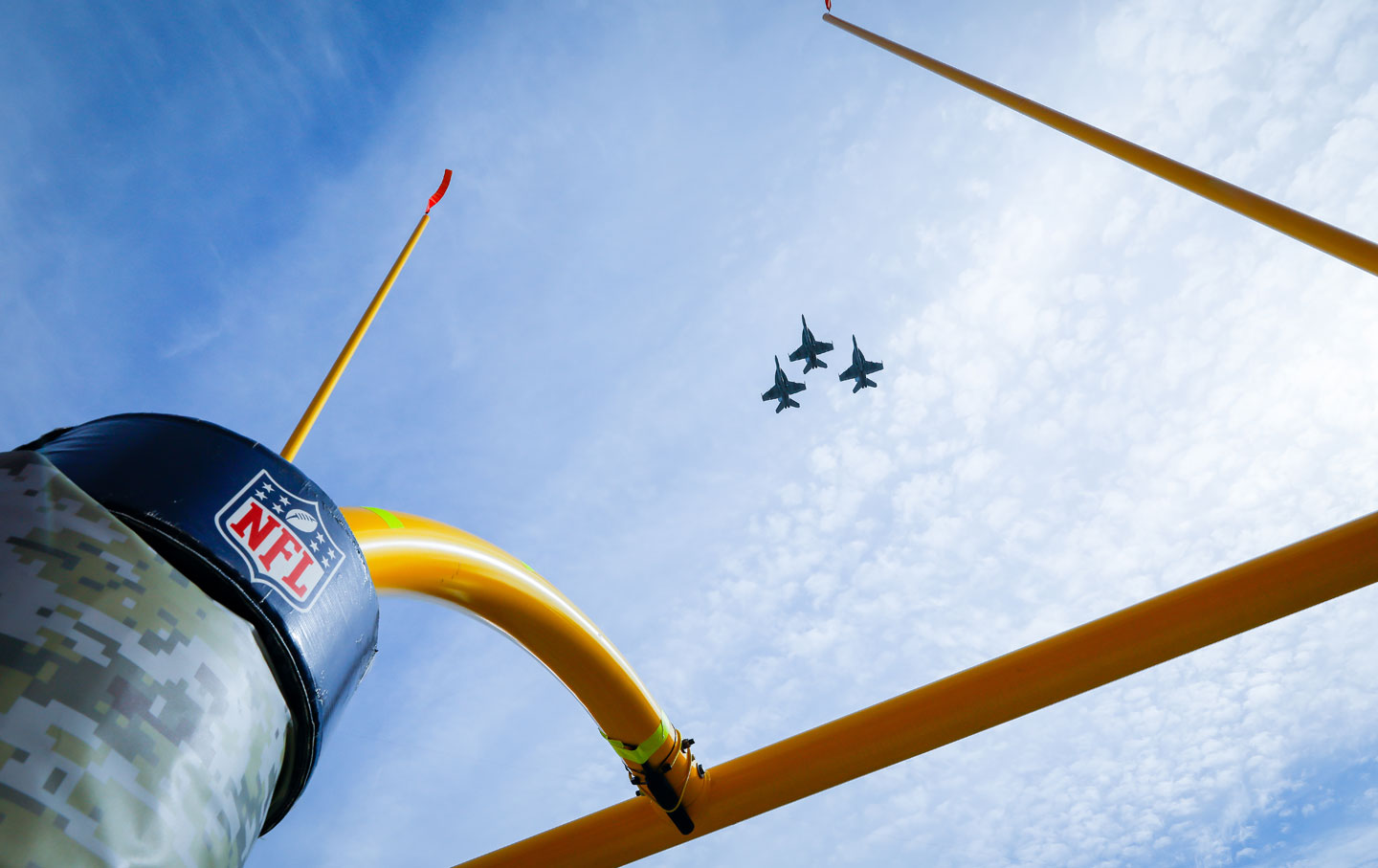 Military jets fly over Arrowhead Stadium during the national anthem prior to the game between the Kansas City Chiefs and the Minnesota Vikings on November 3, 2019, in Kansas City, Missouri. (David Eulitt / Getty Images)

For as long as there has been organized, professional sports in this country, the business has intertwined itself with the military. The drive for war was baked into the cake from the beginning.

The first time a baseball team visited the White House was in 1866, at the invite of our first impeached president, Andrew Johnson, as a way to call for national unity in the aftermath of the Civil War. The reason the baseball Hall of Fame is in Cooperstown, New York, is because a fictitious origin story said the creator of baseball was a general named Abner Doubleday who organized the game in bucolic Cooperstown. This was a lie created by Albert Spalding, as in Spalding sporting goods, someone who said at the beginning of Major League Baseball’s founding, “Baseball, I repeat, is war! And the playing of the game is a battle in which every contestant is a commanding general, who having gained an advantage, must hold it by every resource of his mind and muscle.”

It’s no coincidence that he said this at the end of the 19th century, when the United States was beginning to flex its imperial ambitions. President Teddy Roosevelt, along with the father of football Walter Camp, openly used football as a method of preparing young men for battle before World War I. And sports have continued to be used to marshal support for war ever since.

Today, from the constant military recruitment ads during games to the NFL’s formal partnership with the Pentagon, that relationship continues. As Trump dives headlong into an imperial conflict of choice against Iran, we can expect an uncritical response from the sports establishment on the basis of “supporting the troops.” Yet there is a counter-tradition in sports: a tradition of resistance to imperial conquest that sides with those crushed under its weight. It’s not nearly as deep as traditions against racism or sexism in sports, for example, but it is still there and it needs to be remembered.

I could write about athletes like Dave Megyessy, who spoke out against the war in Vietnam, but the period I want to recall is the time between 2003 and 2007, when George W. Bush started his disastrous war on Iraq. It is largely forgotten now, but there was a vast and dynamic movement in the streets aimed at stopping the war. It involved activists, veterans, family members of those fighting, student organizations, Arab and Muslim groups and many, many more. This mass expression in the streets found expression in the world of sports. Steve Nash, Etan Thomas, Josh Howard, Adam Morrison, Carlos Delgado, Martina Navratilova, Scott Fujita, Adonal Foyle, and even Ultimate Fighting Champion Jeff Monson all raised their voice against war.

A mass movement in the streets—which we aren’t close to having at this point—is a prerequisite to seeing athletes use their platform. But already there are rumbles, thanks to the easy access of social media. Colin Kaepernick, still waiting for someone in the NFL to have the courage to sign him, let loose on Twitter, writing, “There is nothing new about American terrorist attacks against Black and Brown people for the expansion of American imperialism. America has always sanctioned and besieged Black and Brown bodies both at home and abroad. America militarism is the weapon wielded by American imperialism, to enforce its policing and plundering of the non white world.” He also put out this quote from longtime civil rights fighter Angela Davis—retweeting Ameer Loggins @Leftsentthis—“As a Black woman, my politics and political affiliation are bound up with and flow from participation in my people’s struggle for liberation, and with the fight of oppressed people all over the world against American imperialism.”

In addition, Los Angeles Charger Justin Jackson has put out a long series of tweets against war, writing, among many other sentiments, that “we can drone strike a foreign leader from the sky with a death robot all the way in Iraq but we can’t get clean water pipes under Flint.” He also cited the costs of war and wrote, “Yet somehow cable news has the gall to ask Bernie how we’ll pay for free college and a less expensive healthcare system. Oh and by the way, war is a racket. But you already knew this.”

There are other stray tweets out there of athletes raising issues about this mad rush to war. These words are hopefully just a beginning. The hope is not only that they will inspire other athletes to use their voices, but that they will also help propel a movement against this administration’s imperial ambitions and the bipartisan thirst for forever wars.