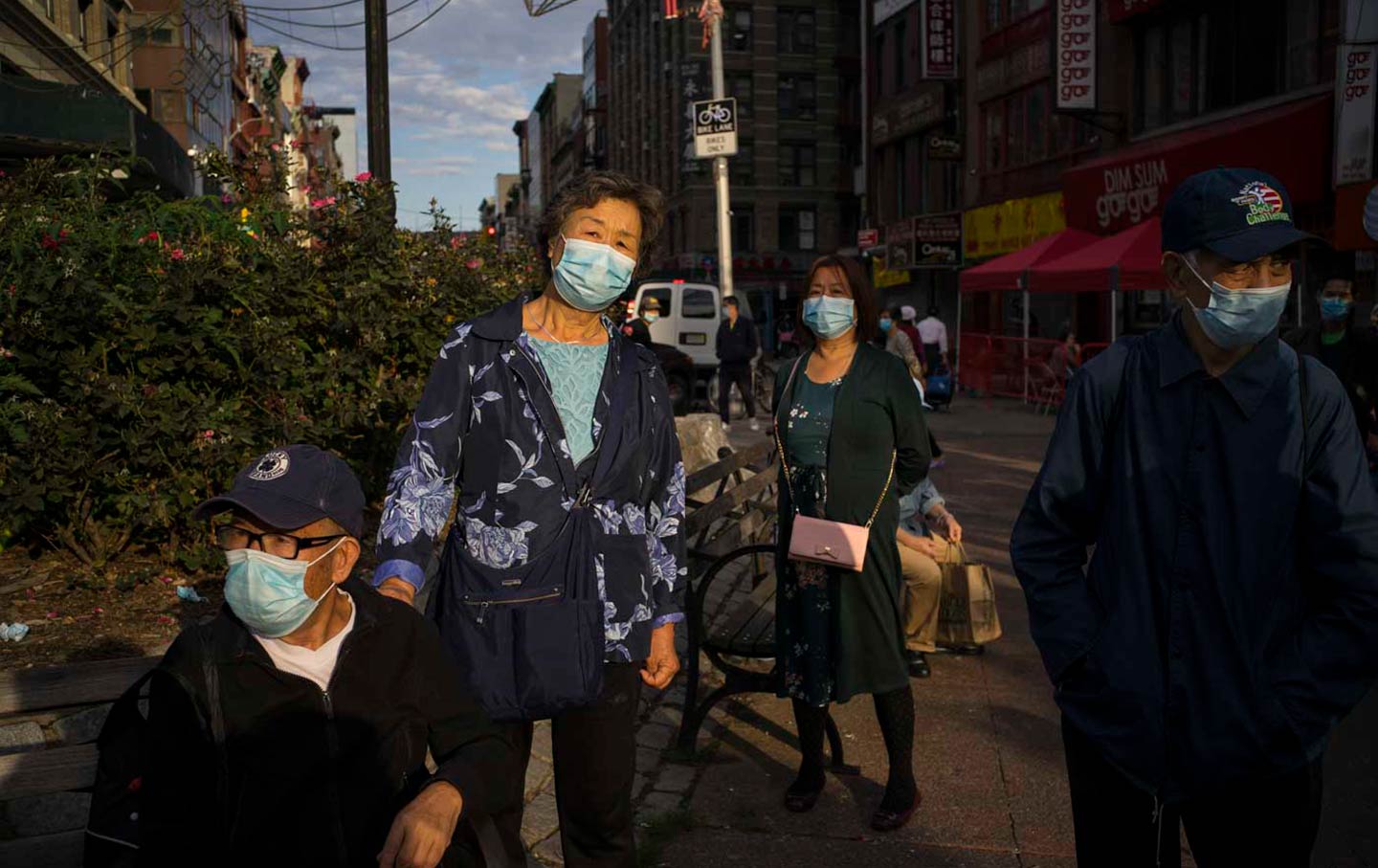 With businesses reopening and street life returning, Chinatown residents are slowly surveying the damage the pandemic has wrought. (Alan Chin)

The ongoing struggle for racial justice. The future for immigrant families. The health and well-being of all Americans. The very fate of our fragile planet. The US faces a crossroads in this year’s elections. Seeking out the stories flying under the national radar, The Nation and Magnum Foundation are partnering on What’s At Stake, a series of photo essays from across the country through the lenses of independent imagemakers. Follow the whole series here.

On sunny days, Manhattan’s Chinatown feels and looks almost lively again. Streets are no longer as deserted as they were when the coronavirus pandemic first hit New York. Diners sit at outdoor tables in front of restaurants, masked shoppers line up in front of stores that limit the number of customers inside at any given time. The unceasing wail of sirens have thankfully died down, but the damage done to New York City—nearly 24,000 dead and countless lives interrupted—will be hard to recover from.

The consequences of the pandemic came to Chinatown early: As President Trump called it the “China Flu” and the “China Plague,” local businesses’ income plummeted in January and February. Incidents of anti-Asian harassment and violence rose. By the time the rest of New York City and then the country was locked down in mid-March, Chinatown was already reeling. And its recovery has been slow and lagging, with many shops closed forever. 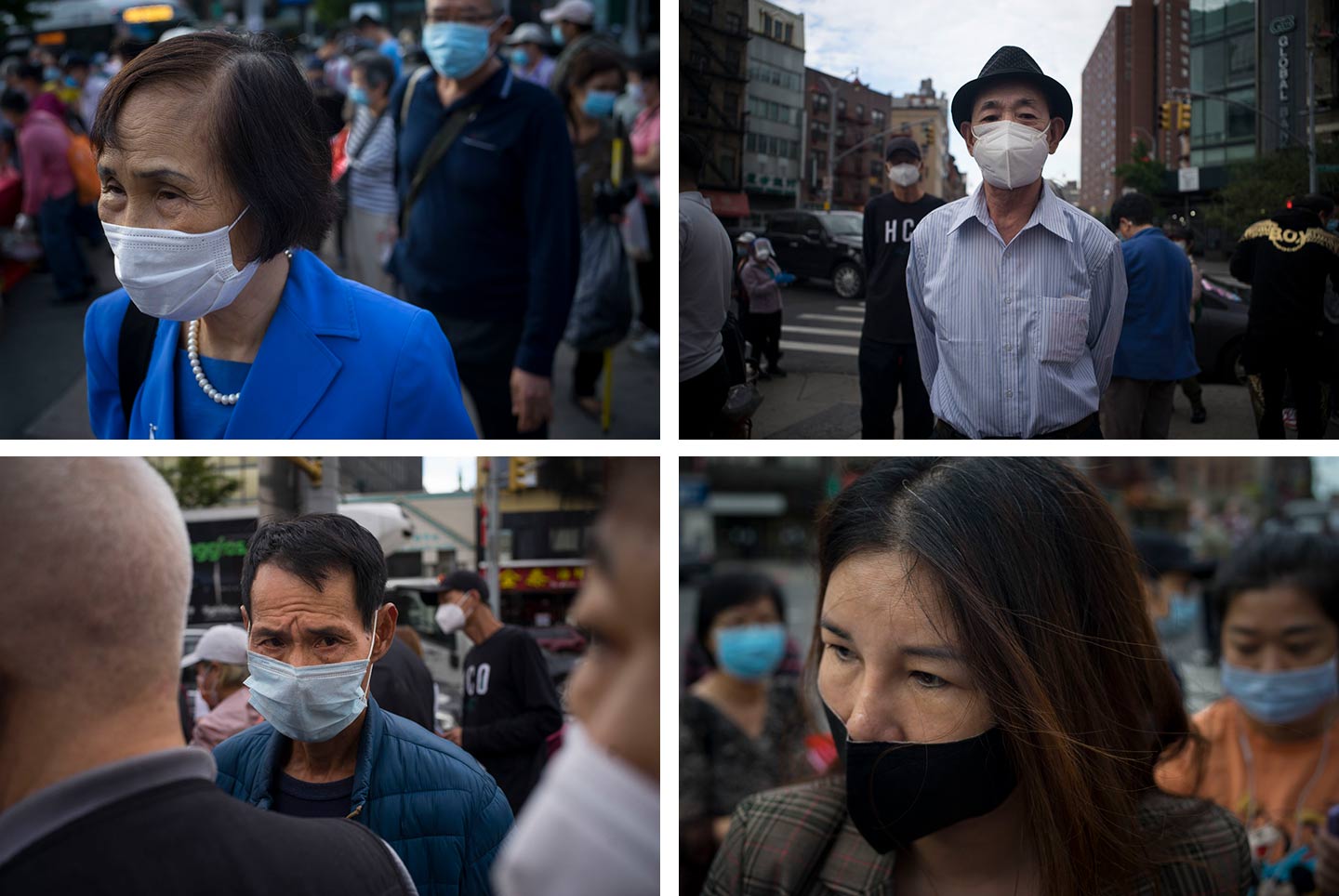 I’ve been a resident of Chinatown since I was 2 years old, and I confess that as the virus ravaged the elderly at nursing homes, killing them in shocking numbers, I was mournfully relieved that my own parents, grandmother, and great-uncles are no longer alive to suffer or die this way. But I am often reminded of them in the many senior citizens that live in the neighborhood today. Many speak Toishanese (Hoisanwa), my family’s Cantonese variant once dominant in American Chinatowns but long overtaken by standard Cantonese, Mandarin, and Fujianese.

The Chung Pak Senior Housing building, the only retirement home in Chinatown, has a vegetable garden on its roof and a years-long waitlist. (Alan Chin)

The Chung Pak Senior Housing building is the only retirement home in Chinatown, within easy walking distance to the fresh vegetable, seafood, and meat markets that Chinatown is famous for. Its 88 units have a waiting list of many years. Its roof is open to the residents and has a blooming vegetable patch that was started as a multigenerational project between the seniors and grade school students from PS 130. But this year, the students haven’t been able to come. 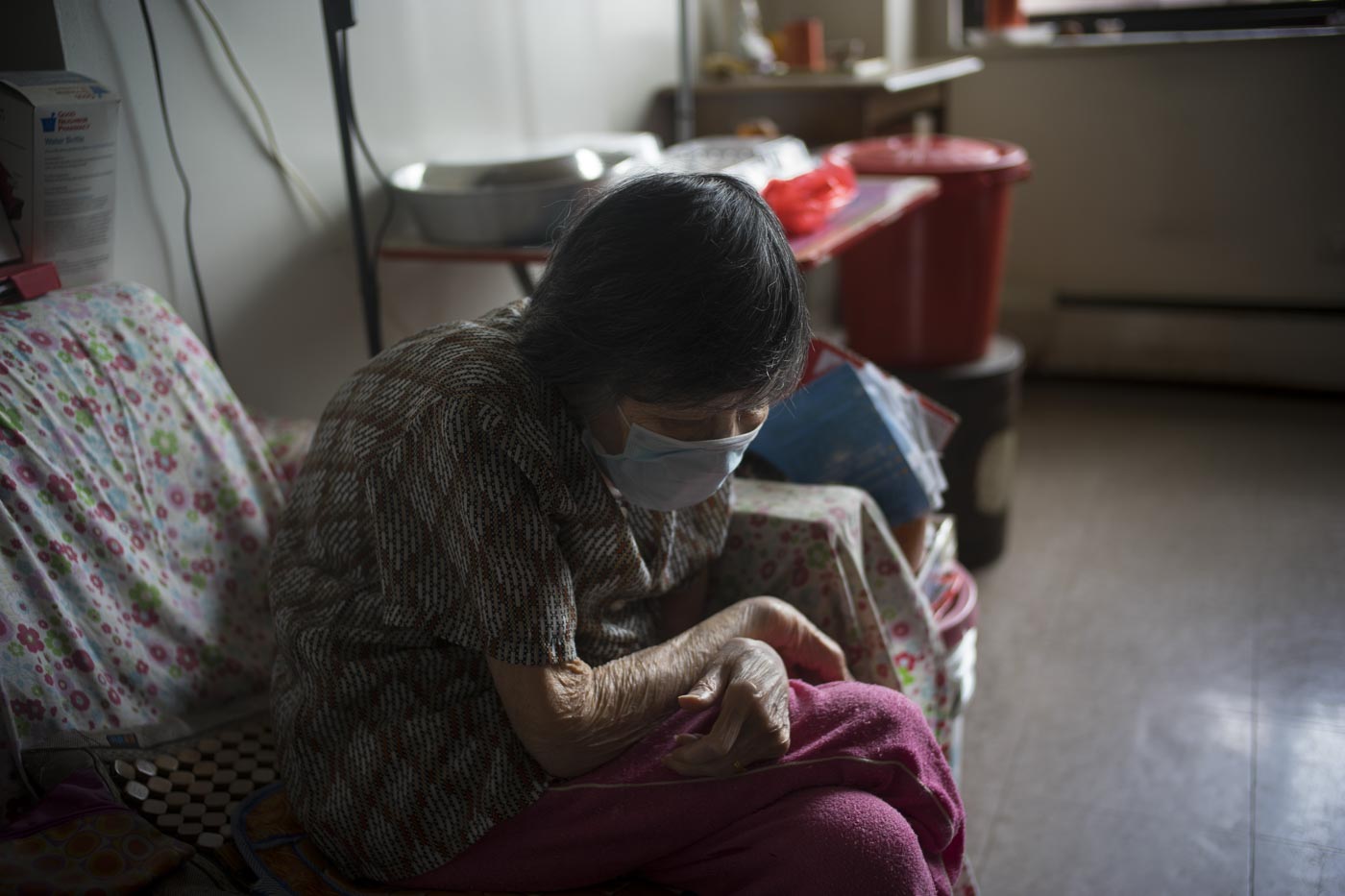 Mrs. Wong, at age 99, is one of the older residents, and has lived in Chung Pak for over 10 years. Like both my parents, she emigrated from Toishan (台山) and was a garment worker. She said, “It’s been hard. I’ve been stuck at home. And the home aides didn’t come. They couldn’t work. My daughters took turns coming to take care of me. They came and stayed the nights. I’m very bored. But there’s no recourse. I’ll go out again when everything opens up again. I hope it’s soon.” 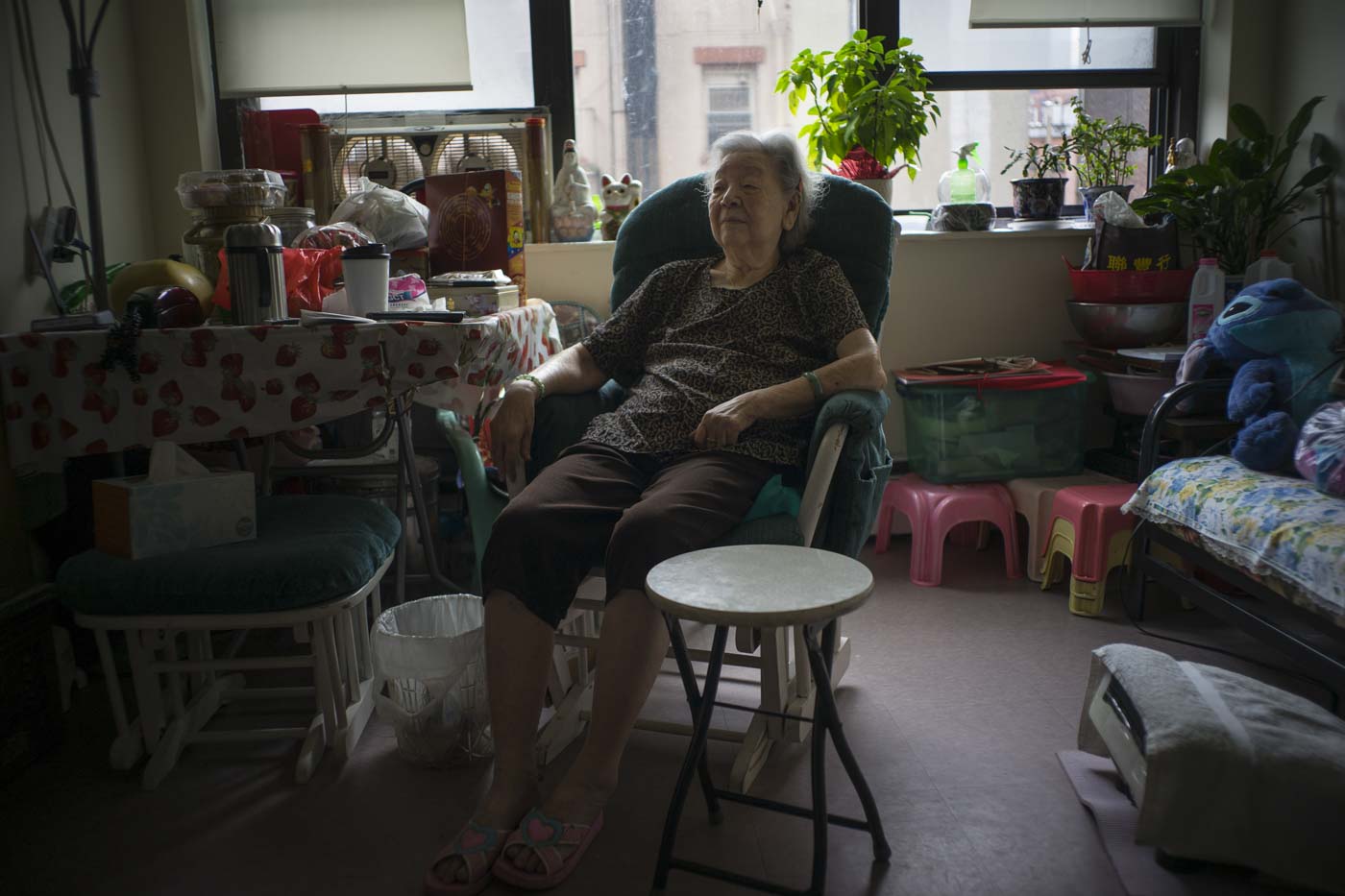 Mrs. Chin made her living as a garment worker before moving into the Chung Pak Senior Housing building. (Alan Chin)

Mrs. Chin, age 85, came to America in 1976, from the town of Doushan (斗山) just 12 miles from my parents’ hometowns of Samhop (三合) and Ngaugam (那金). She, too, was a garment worker. She said, “I’m still afraid to move around. I’ve only been out twice, to see doctors: the eye doctor in August and to get my flu shot in September. My health isn’t so good and I have fainting spells. My most frightening moment of this pandemic time was when I woke up and it felt like the whole house was spinning. It went on for over half an hour until my daughter drove here. I think it comes from high blood pressure.” She regretted that “I’m not literate. There was no chance to go to school; that was only for boys.” She did have some advice for me: “My husband caught wild snakes. Use the snake to infuse liquor for at least two to three years. Then drink it. Snakes are the key to longevity.” 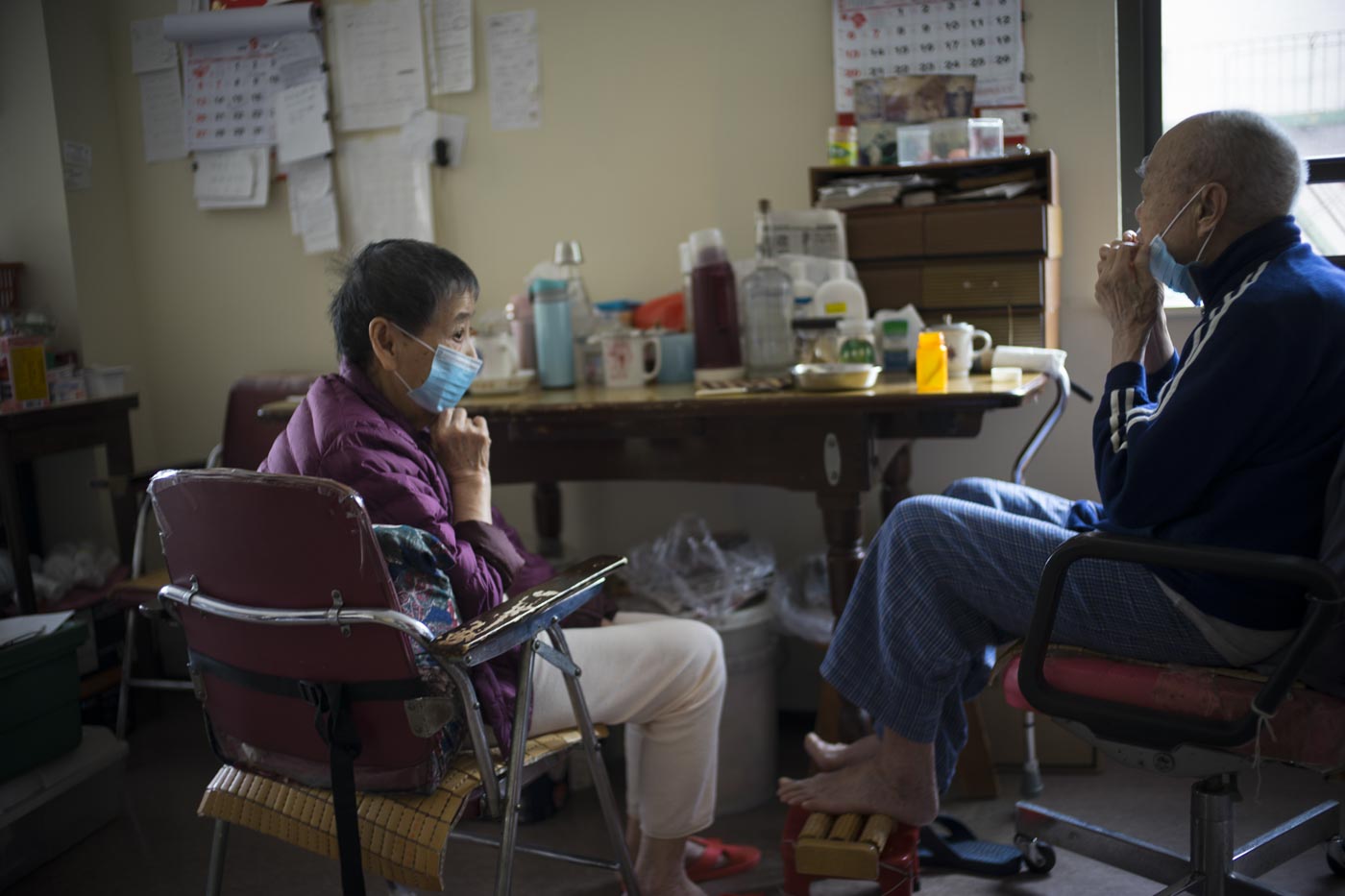 Mr. and Mrs. Lee in their unit. “This pandemic feels like being in jail,” Mrs. Lee admitted. (Alan Chin)

Mrs. Lee was the only resident I met still with her husband; they live in one of the corner units with stunning views of Little Italy and Chinatown. But he, suffering from dementia, didn’t speak when I visited them. She said, “I’m depressed. This pandemic feels like being in jail. I forget, sometimes, because I don’t want to think about it. It’s been hard for our children to visit us in these times, too. But I do appreciate how the staff here have been very concerned about us.” 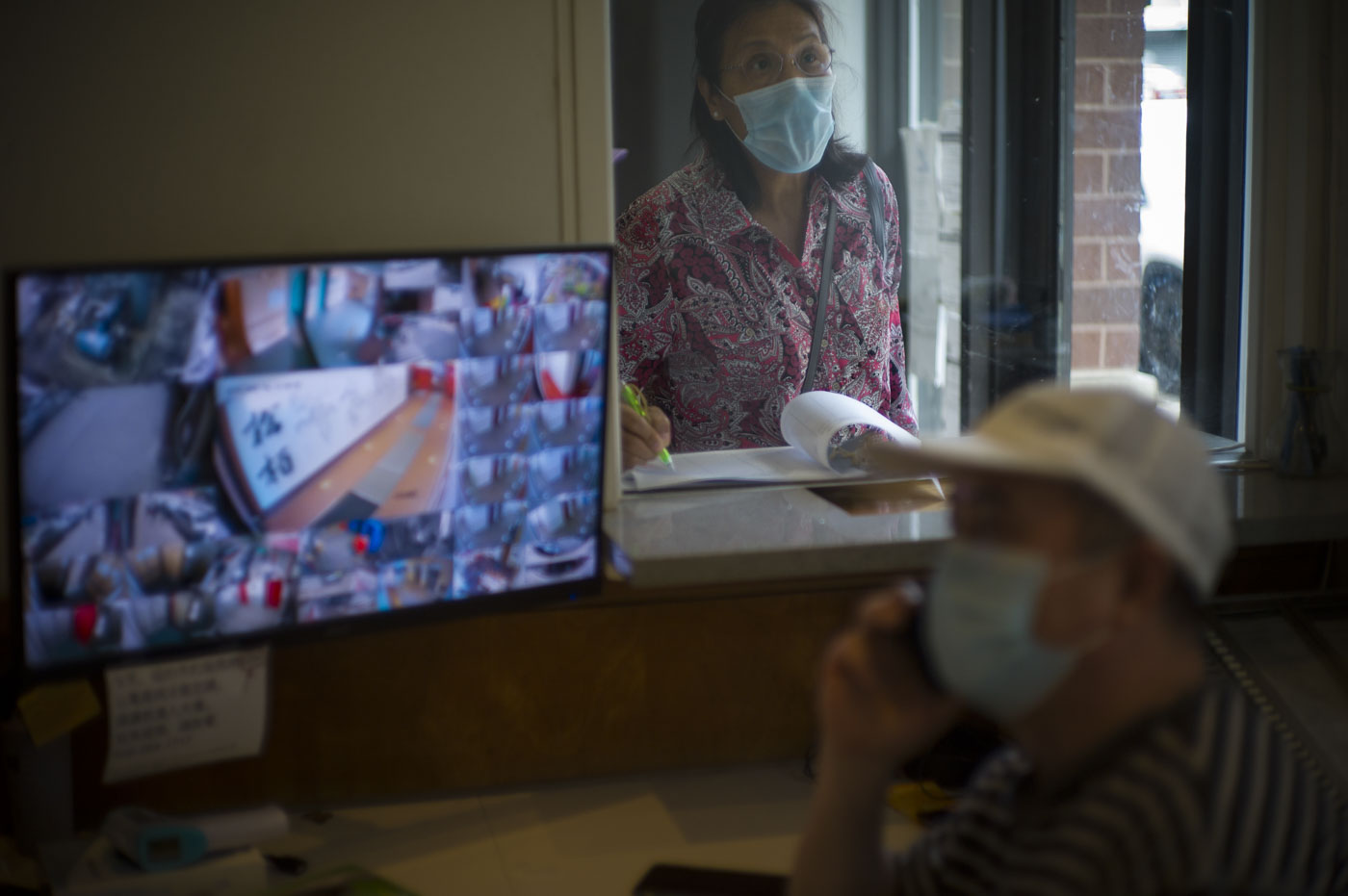 Sam Wu, the superintendent for the Chung Pak Senior Housing building, has been working overtime during the pandemic. (Alan Chin) 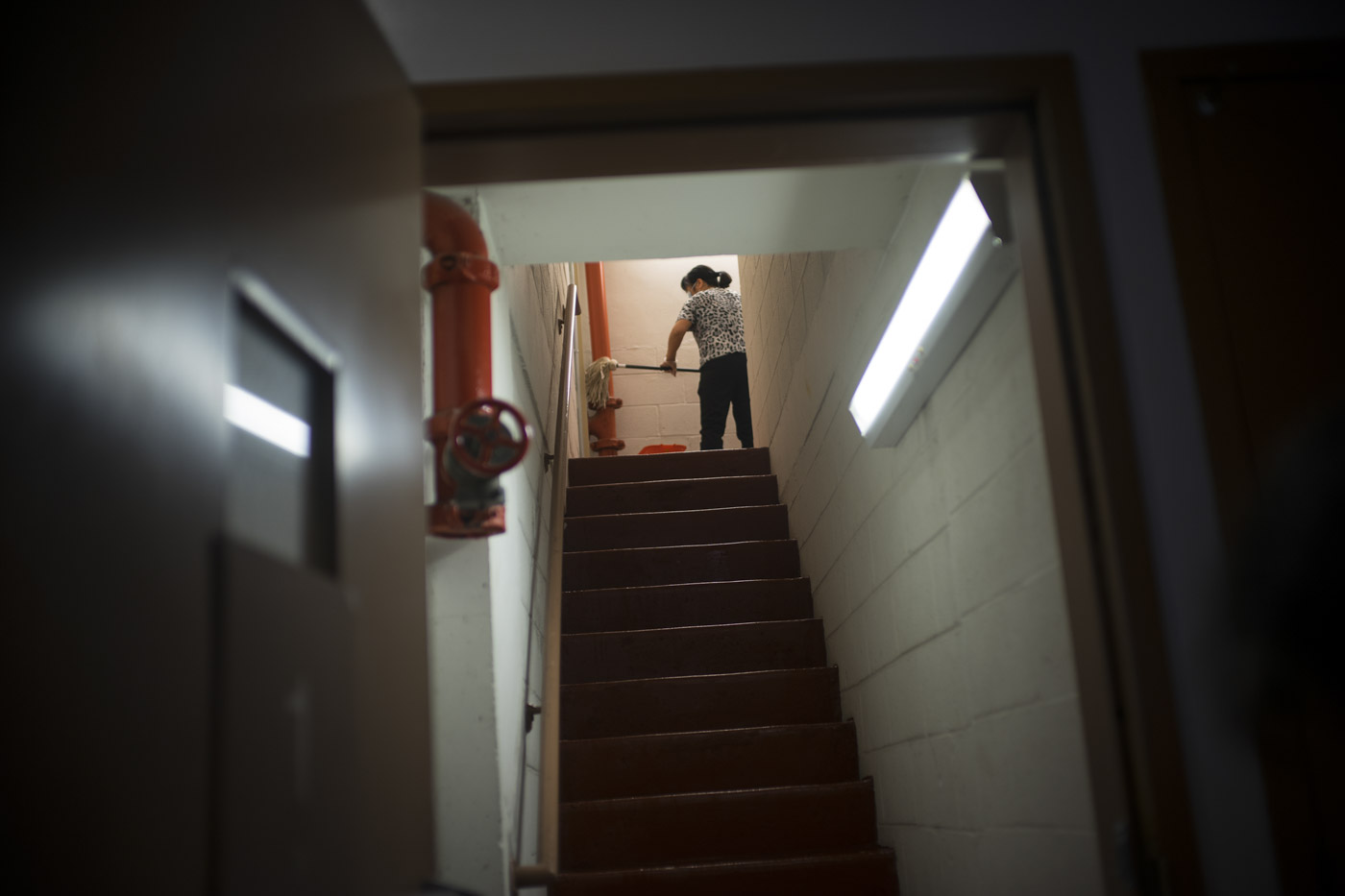 One of the health aides at the Chung Pak Senior Housing building volunteers to clean the hallways due to limited staffing. (Alan Chin)

Sam Wu, the superintendent, lives in the building, but his staff has been reduced from seven to only one, so he doubles as the doorman. To make up the shortfall, the residents’ home health attendants volunteer to mop the floors and stairways. He encourages them with positive words—“We must all act as family here, in this emergency”—and thanks them with gift certificates for the bakery next door. Only a year in his job, he says, “Seniors have their children, grandchildren, and health aides visiting them all the time, and spending money. Build a condo, that’s just those two young people in a unit. For the neighborhood to remain sustainable, senior housing is a societal gain.”

Chinatown has been changing in recent years, subject to the same forces pressuring other neighborhoods in the city: gentrification, inequality, rising housing costs. Add to that the anti-Chinese rhetoric that accompanied the coronavirus crisis, and the neighborhood has needed some protecting. In February, Karlin Chan, a retired fiber optics engineer and lifelong Chinatown resident, called some friends and formed the Chinatown Block Watch, patrolling the streets on alternating days with the Guardian Angels. He said, “More than half of incidents of harassment aren’t reported to the police. I myself have been profiled twice, as a senior. I was in a line shopping and a guy was following me. Another store, a person walked right up to me. Hairs on your back, sixth sense, body language. In early March the streets were so empty. They look for vulnerable targets: Single women walking by themselves and seniors.” 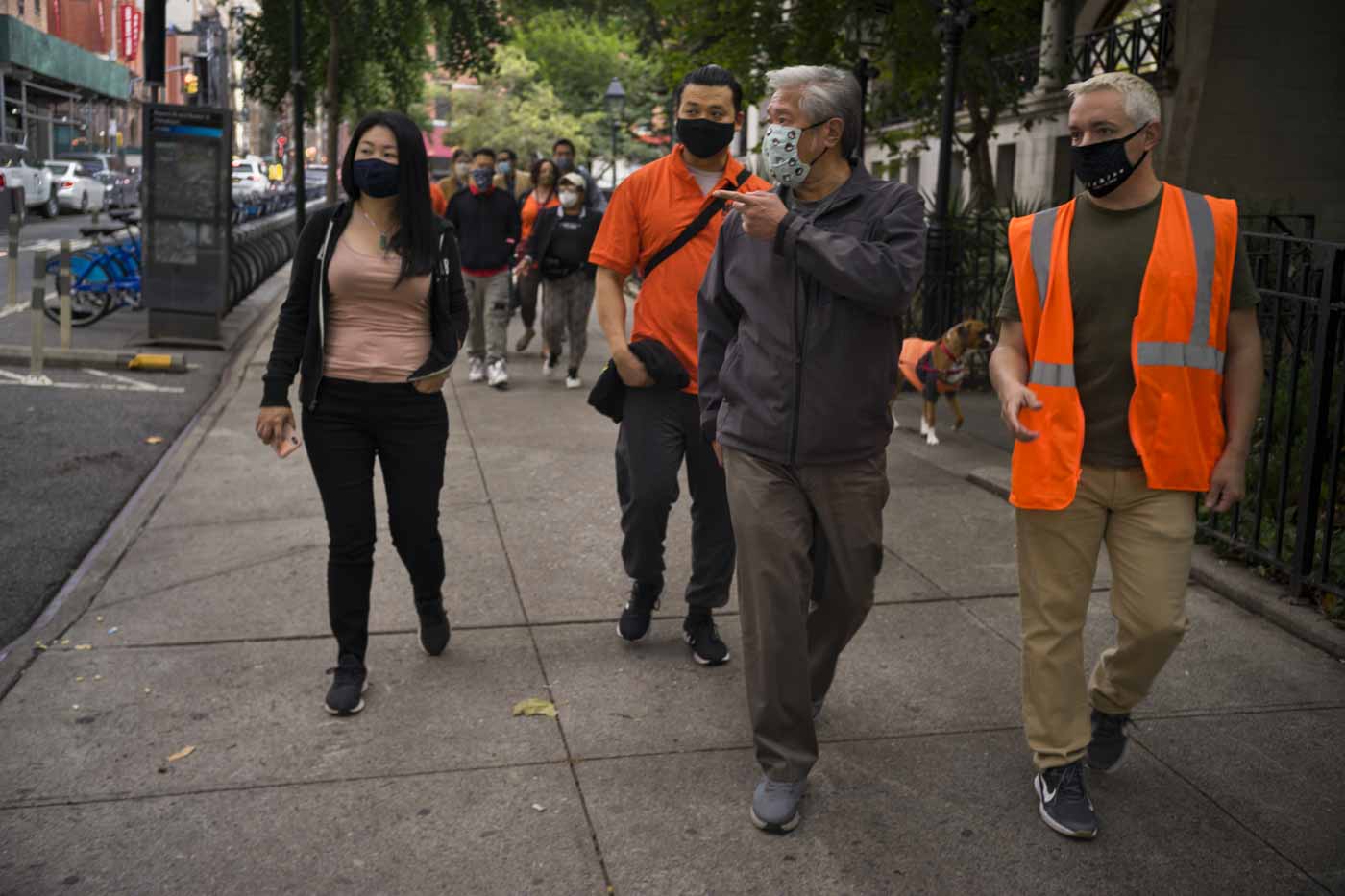 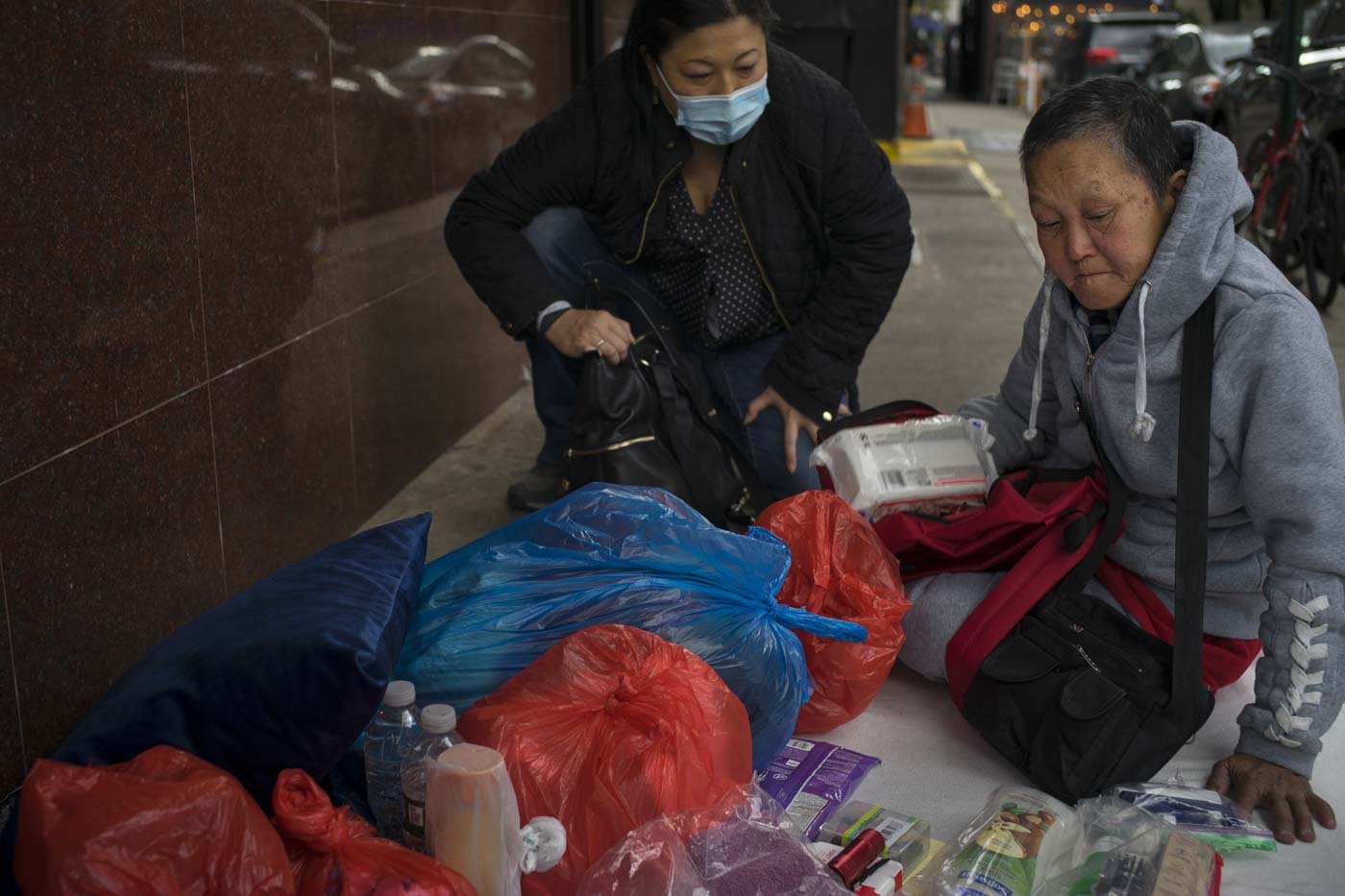 Kiyoe Takada, in black—a member of the Chinatown Block Watch— performs a wellness check on a homeless woman on the corner of Canal and Baxter Streets. (Alan Chin)

He added that conflicts also arise because of “language issues: Sometimes a misunderstanding turns into a racist tirade. People are frustrated, locked down for months, but they have to understand that in an ethnic enclave, not everybody can speak English. Frustration turns into anger.”

Over the months of walking, Karlin said that they’ve had to directly intervene only once: “We chased a guy out of the neighborhood. He was making racist remarks to a bunch of old ladies on Grand and Elizabeth [streets]. We ushered him out.” Grayson Chin, who lives in the same building as Karlin and joined the group at the beginning, added, “You don’t hear about Asians fighting back, and anti-Asian sentiment is still going on. We just want to be a visible deterrent, so that Asians feel safer and better.”

The small, family-run businesses that make Chinatown unique are also under threat. At the Double Crispy Bakery on Grand Street, owner Huang Weizhou told me, “We reopened on May 25 but we’re down to seven employees from over a dozen, and my wife and I are here seven days a week from 6 am to 7 pm. She hadn’t needed to come in for years, but she’s full-time now. We just barely started breaking even again. Some of our workers, they’re the only wage-earner in their family.” 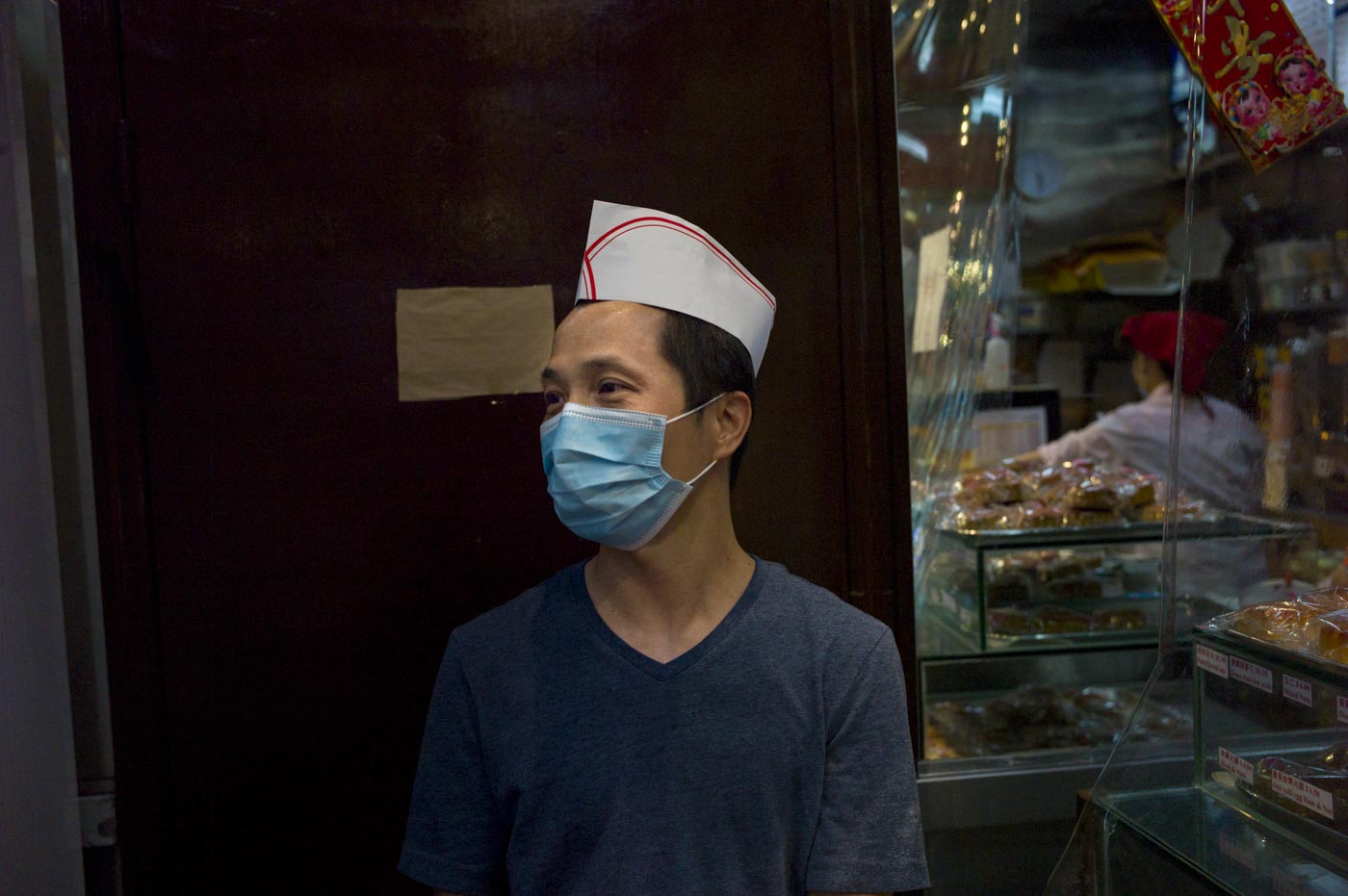 Huang Weizhou explained that his Double Crispy Bakery on Grand Street is struggling because of reduced business during the crisis. (Alan Chin) 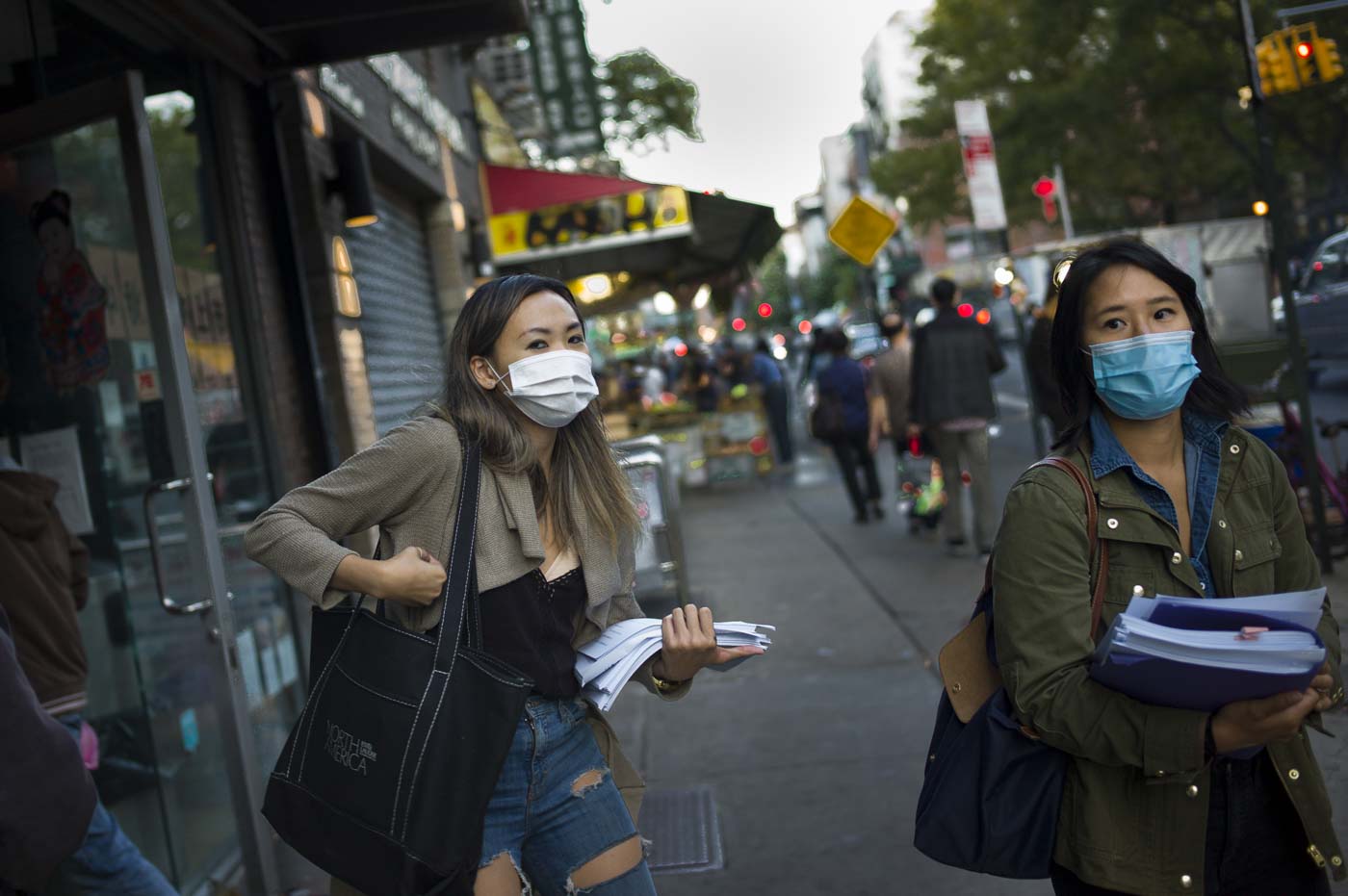 Huang was glad to receive an application for Welcome To Chinatown’s Longevity Fund small-business grants, a nonprofit initiative that formed in response to the pandemic. Jennifer Yu Tam and Victoria Lee both work in corporate jobs, and at first glance, might seem to be unlikely activists; they are of the younger generation that is more fluent in English than Cantonese, that fulfilled their families’ aspirations for upward mobility. They wrote on their website, “The prolonged impact of the COVID-19 pandemic poses a great risk to accelerate the gentrification of Chinatown and the displacement of its residents and small businesses. The shuttering of such businesses would not only result in the loss of one of the oldest Chinese enclaves and one of the most culturally significant neighborhoods for Asian Americans, but it would also pose an irreversible risk to the working class residents it uplifts.”

In Columbus Park, Chinatown’s largest public space, the Chinese chess players are back at their tables, but removing their masks only to smoke and drink coffee. Life goes on, but hardly normally: At Chatham Square, a long line formed for a free mask distribution as part of the China National Day celebration on October 1. On Mulberry Street, later that same week, the decades-old Lung Moon Bakery shuttered its doors for the last time, another storied business disappeared. 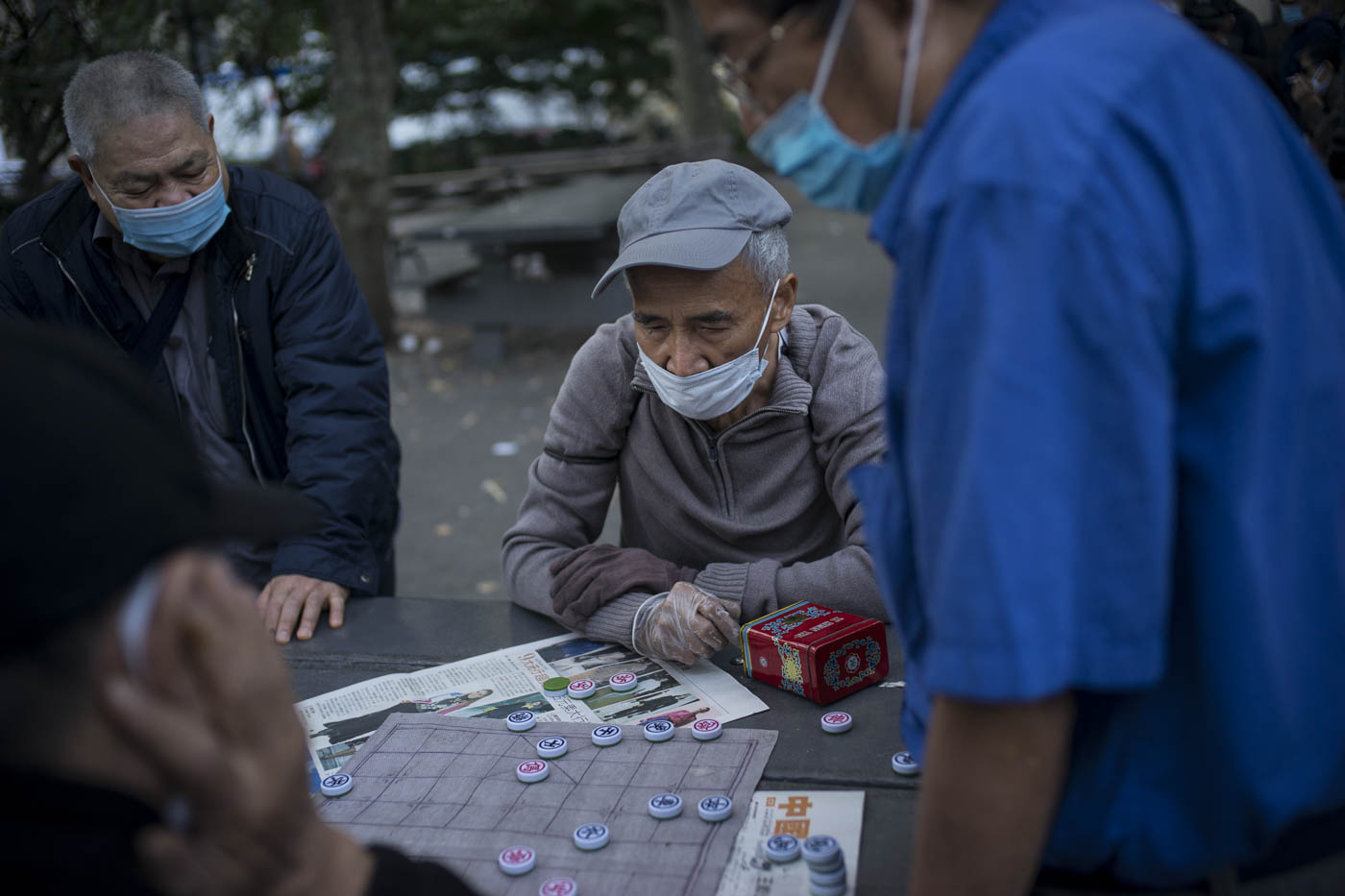 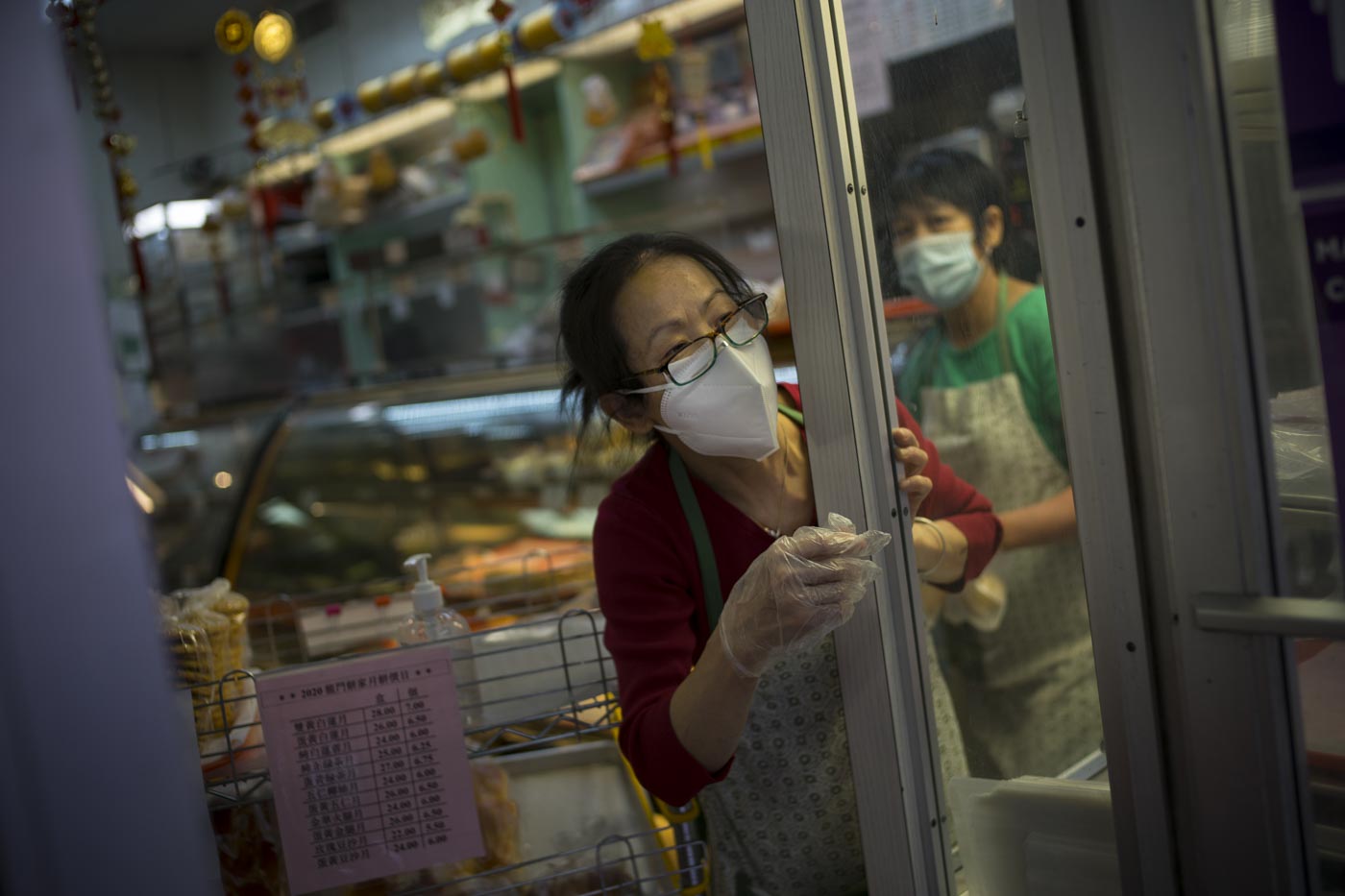 The last day of business for the Lung Moon Bakery on Mulberry Street. (Alan Chin)

Manhattan’s Chinatown has been part of the New York’s landscape and history since the 1850s. It has endured the Chinese Exclusion Act, racist housing and hiring practices, world wars, recessions, and depressions. I was the first of my family to be born in the United States and the first to speak English without an accent. I am old enough to remember when the old men and women in Columbus Park were people born in the 1890s, under the empire ruled by the Qing Dynasty. I find myself in this pandemic moment thinking a lot about their extraordinary courage and tenacity. I am confident that our generation of Chinatown, too, will survive. Now, as then, that task remains full of challenge and struggle. 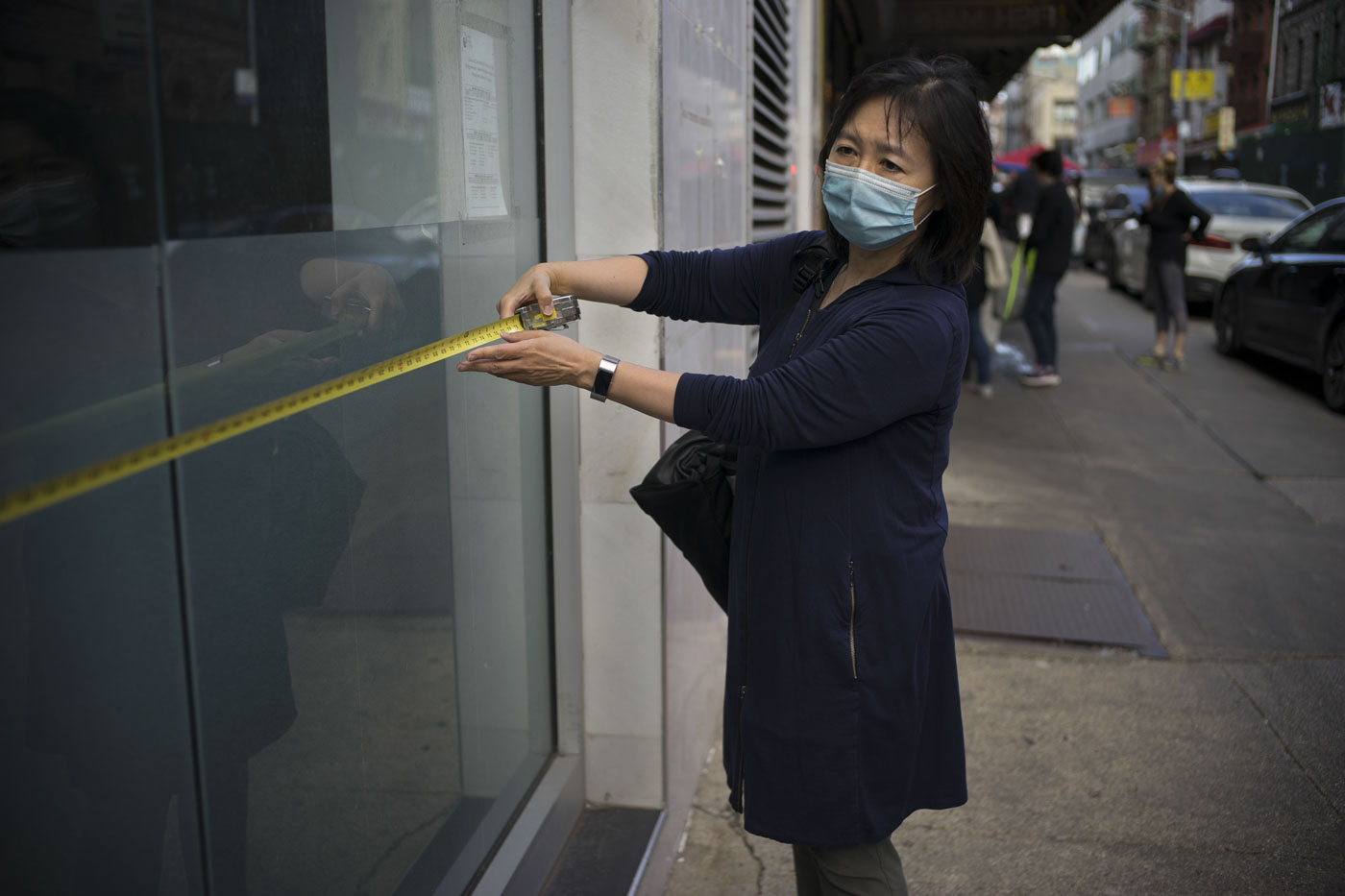