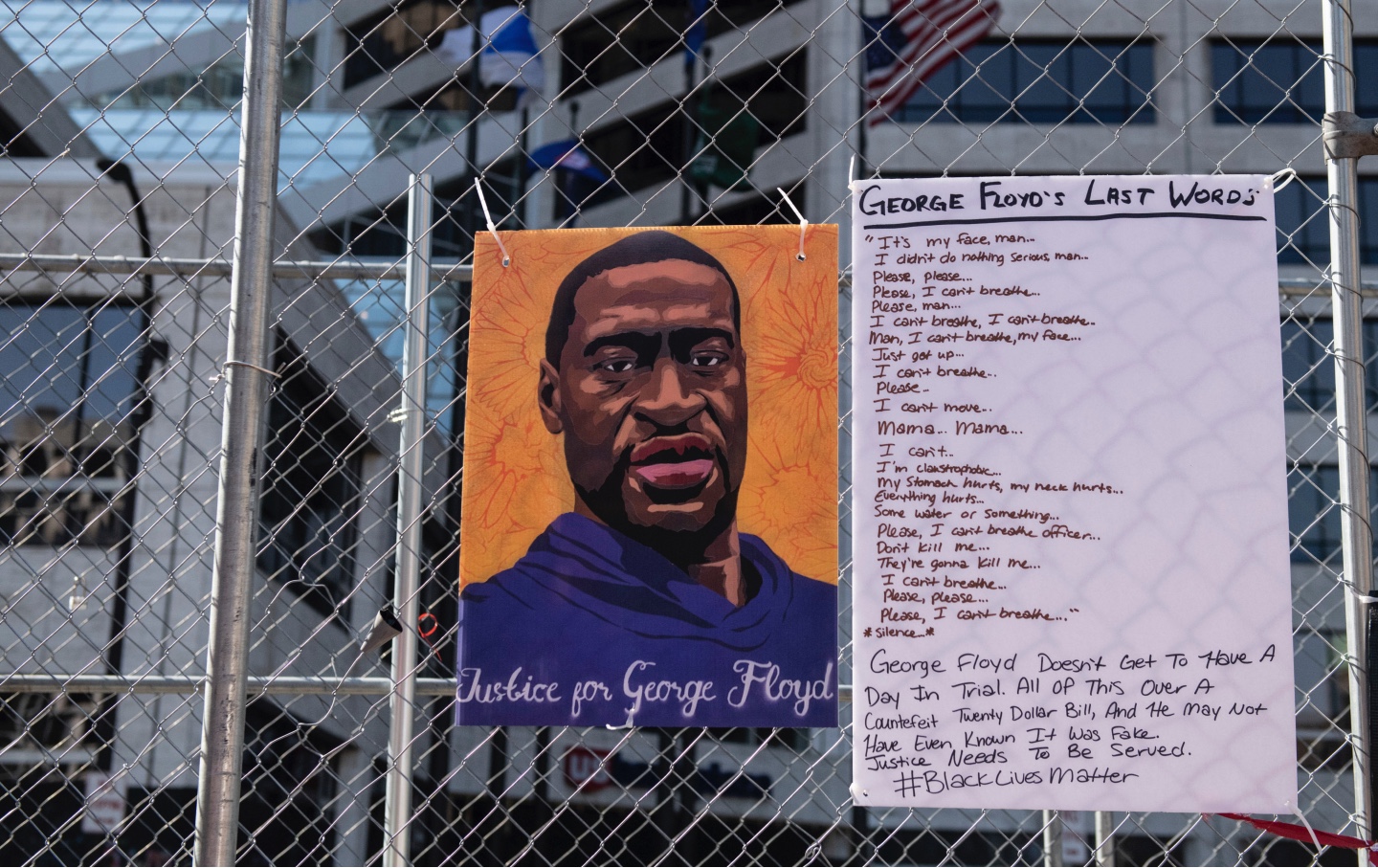 A poster of George Floyd hangs outside the Hennepin County Government Center, where the trial of Derek Chauvin is taking place. (Chris Tuite / ImageSPACE / MediaPunch / IPX)

There is nothing unique or interesting about the defense strategy employed by the lawyers for Derek Chauvin. The trial has produced no made-for-television stunts or rhetorical flourishes. There’s no bloody glove, no rhyming couplets. Chauvin’s defense is so basic that an attorney straight out of law school could pull it off. His lawyers are simply arguing that cops have the right to kill people, if they think they need to.

That strategy might seem foolish to the untrained eye. After all, there is incontrovertible video evidence that Chauvin did not “need” to kill George Floyd. The video shows that Floyd posed no threat to the police or anybody else: He was prone and handcuffed while Chauvin slowly choked the life out of him over the course of eight minutes and 46 seconds. Any reasonable human being can see that Chauvin should have taken his knee off of Floyd’s neck.

But the defense lawyers know that the law does not require Chauvin to behave like a human being; it only requires him to behave like a cop. It doesn’t hold cops to an objective standard of behavior. Instead, the law allows an individual cop’s own frailties—their fears, their racist misconceptions, and even their own hysteria—to define the scope of acceptable cop behavior. If Chauvin’s lawyers were better showmen, they’d be telling the jury, “If Chauvin could imagine being hit, you must acquit.”

As it is, Chauvin’s attorneys have taken to citing the 1989 Supreme Court case Graham v. Connor—and doing it so frequently that you’d think a man named Graham V. Connor told Chauvin he could get away with murder. In a way, that’s exactly what the case did. Graham v. Connor changed the use-of-force guidelines for police all across the country, allowing them to be more violent and homicidal.

To understand how one case has authorized brutality, you have to appreciate that our only real constitutional protection from police violence is the Fourth Amendment’s prohibition on “unreasonable search and seizure.” “Unreasonable” was, naturally, poorly defined by the collection of white men who wrote and ratified the Constitution and determined that things such as slavery and genocide were totally “reasonable” uses of state power. Still, for most of American history, the Fourth Amendment followed a “reasonable [white] man” standard: The actions of the government, or its agents, were judged through the lens of what an average person would find reasonable.

In practice, this allowed for plenty of abuse. Victims of police brutality had to show that officers acted “unreasonably” and with malicious intent. As one can imagine, it was always hard for victims (or their surviving family members) to prove that a violently homicidal police officer intended to kill them. Before camera phones, it was nearly impossible to get white people to believe the cops acted like Black people have always said they do.

Graham v. Connor took this loophole and made it so big that whole police forces could simply saunter right through it. Instead of limiting police use of force to what a reasonable person might expect, the Supreme Court said that force could only be judged against what a reasonable “officer on the scene” would do. In the actual Graham v. Connor case, that meant the court found that a “reasonable officer” could slam Dethorne Graham’s head into his car and break his foot, because Graham was resisting arrest, never mind that he was a diabetic going into shock who was being detained on the suspicion that he stole some orange juice—which he did not.

Graham v. Connor was authored by the conservative Justice William Rehnquist, but the decision was unanimous. The liberals on the court thought this new “reasonable officer” standard was an upgrade over trying to prove malicious intent.

History has proven them woefully wrong. Graham v. Connor is the reason every officer accused of murder claims “I feared for my life.” It’s the reason most officers are never charged in the first place and the reason a police officer’s saying “I thought he had a gun” nullifies the objective truth that a suspect was unarmed. Since Graham v. Connor, it doesn’t even matter if the police are malicious or not; they can be malicious so long as they can argue that a “reasonable police officer” would be just as malicious under the circumstances. The result is a self-fulfilling loop of violence: As additional officers respond violently to situations, it becomes easier for other officers to argue that violence is a reasonable police response in a similar situation in the future.

And Graham v. Connor does all that before we get to the racism. Those who have watched the Chauvin trial have undoubtedly noticed the string of racist bread crumbs laid out by the defense about Floyd’s apparent “strength.” There is a long and ugly history of white people ascribing super strength to Black people as a way to justify the use of deadly force against those Black people. There’s even a controversial medical term, “excited delirium,” that is often cited by the police to explain why they just had to kill an unarmed Black person.

At trial, Chauvin’s lawyers have argued that even after Chauvin choked Floyd unconscious, he needed to keep choking him, lest Floyd regain consciousness and access his hidden reservoir of big Black power. They’ve argued that the crowd, the group of bystanders who filmed the murder, might have encouraged Floyd to wake up and start beating Chauvin and the other police officers at the scene—all by himself. When the defense gets to call witnesses, I half expect them to put Bruce Banner on the stand to testify that it’s not gamma radiation but colored melanin that makes him swole.

All of this racism isn’t being offered by the defense to confuse the issue. It’s not a sideshow. It goes to the heart of their Graham v. Connor defense. If they can convince even a single juror that large Black people can beat up four cops while almost dead, then they can convince them that a “reasonable cop” would keep his knee on a man’s neck for nearly 10 minutes. That’s why, during cross-examination, the defense keeps asking the cops who are testifying as witnesses against Chauvin—cops who are being called specifically to rebut Chauvin’s idea of a “reasonable officer”—questions prefaced with “Is it possible…?” and “Have you ever heard of…?” Is it “possible” that Floyd could have entered an excited delirium state and then posed a threat to the officers? Have you ever “heard” of a person waking up from being choked unconscious and then hurting somebody?

The defense lawyers aren’t asking about what actually happened. In reality, Floyd never posed a threat and never was allowed to wake up, because Chauvin killed him right there on the street. His lawyers are asking about a fantasy world of what might have happened if Floyd were the supernaturally dangerous man Chauvin wanted him to be, instead of the real world where Chauvin tortured and murdered a normal man in a cold-blooded way.

This will all come together during closing arguments. Chauvin’s lawyers will argue that if it’s “possible” that Floyd could have called upon the strength of his ancestors and the spirit of the Black Panther to re-breathe and crush his enemies, if Chauvin could have “reasonably feared” that zombie-Floyd would reanimate himself and come for Chauvin’s brains, then a “reasonable police officer” would continue suffocating him until there was no chance of revival. “Because police officers have the right to go home.”

That’s an entirely valid legal argument under our current laws. The legal debate about whether an officer’s actions are justified now takes place within the hysterical headspace and fever dreams of a cop, instead of on the plane of objective reality.

I don’t know if the cop defense will work this time. First of all, Black people do not have superpowers, and it is unreasonable to think that they do. Secondly, I’m not the only one saying that: This time, there are other cops testifying against Chauvin, arguing that what he did “absolutely” defied police training, policy, and procedure. I think it’s pretty hard to argue that you are a reasonable cop when other cops testify against you.

The Blue Wall of Silence Is Crumbling Around Derek Chauvin

Arradondo Condemned Him, but All Cops Are Derek Chauvin

But the fact that this is even considered a valid defense strategy illustrates, once again, that our laws are objectively pro-police brutality. The Supreme Court has given cops license to kill people, and the only limit it has placed on that violence is what another cop would do in the same situation. It’s like a chef telling sheep the wolf gets to set the menu.

Congress could repudiate the court’s holding in Graham v. Connor and set a new national use-of-force guideline tomorrow, if it wanted to. State governments could define “reasonable” force as something more robust than “whatever the cops say,” if they wanted to. Many Democratic presidential candidates, from Julián Castro to Cory Booker to Kamala Harris, supported new national use-of-force guidelines and restrictions that, if adopted by states, could render the Chauvin defense inoperable for future murderous cops. But the person who won, President Joe Biden, was not one of them. Biden favors community policing, accountability review boards, and bringing people together to “figure it out,” but he hasn’t been out front on changing the actual legal standard cops use to get away with murder (or packing the Supreme Court with the kind of liberals who will do it on their own).

Unless Biden and the Democrats use their moment of total control of government to change the Graham v. Connor standard, the next cop who shoots an unarmed Black person will claim he feared for his life. And the next one after that. And all the other next ones who will brutalize and kill in this country that refuses to address the state-sponsored terrorism directed against Black bodies.

When you watch the Chauvin trial and listen to the defense put on their case, remember that all the victim blaming, fearmongering, and racism is not a fancy lawyer trick aimed at subverting justice. It’s a policy choice, made by the Supreme Court.