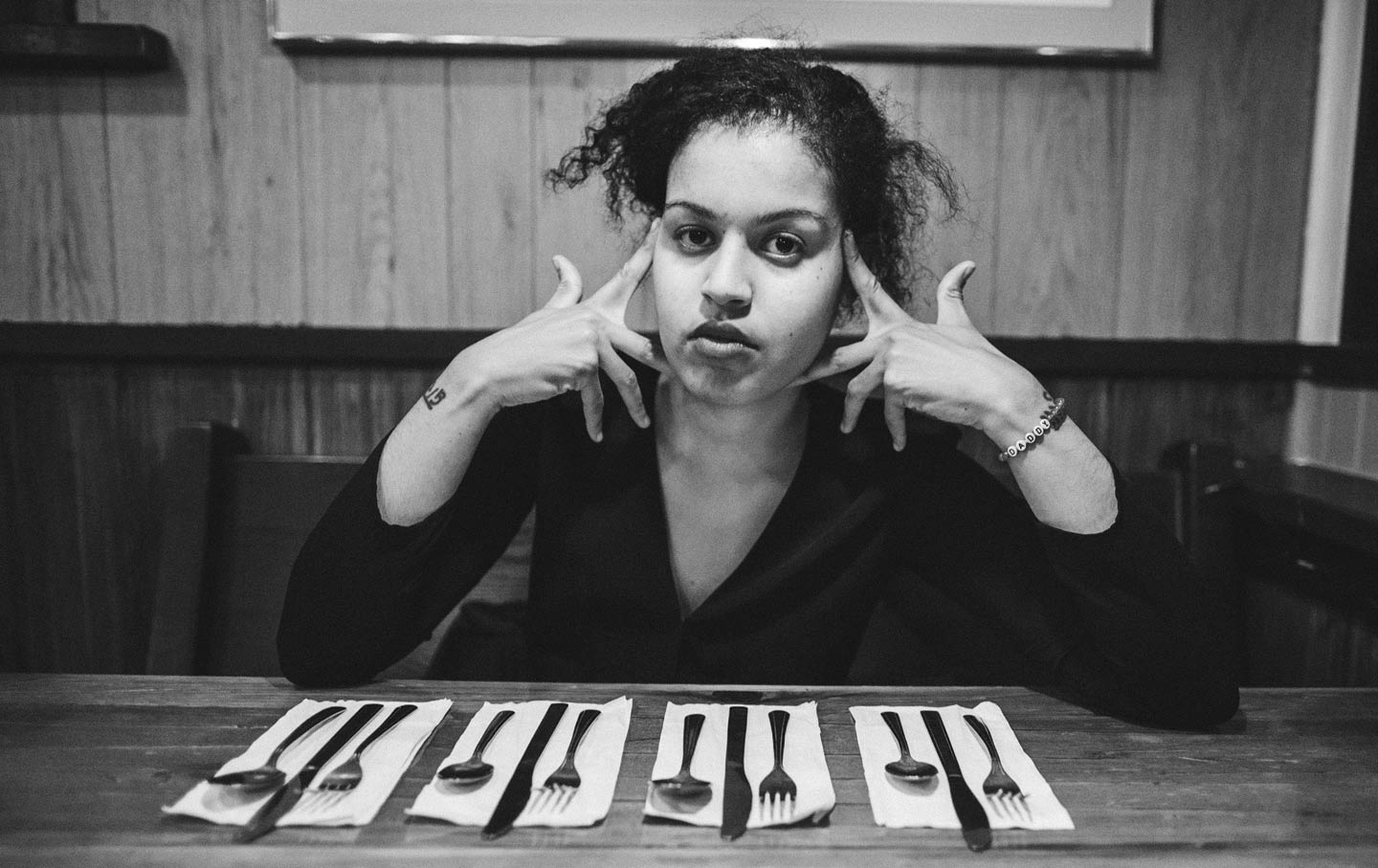 In the first few seconds of her new album, the Washington, DC–bred, post-punk artist Sneaks makes it clear that she doesn’t really care about easing listeners into her world. She starts the opening song with distorted vocals which whisper the name of the album, Highway Hypnosis, over and over again like an eerie incantation. A shadowy bass kicks in, along with shards of noise and glitchy synth flourishes, and then a bloodcurdling screech of “Oh my gosh!” cuts through the arrangement. Another voice pipes in to declare that “Highway Hypnosis is out now.”

The introduction is jarring, even stifling, playing out like a demented advertisement while simultaneously poking fun at the fanfare that comes with promoting new music. It also reflects the quietly rebellious, somewhat sardonic spirit of Sneaks, a 23-year-old DIY maverick who doesn’t make things that are conventional or straightforward. She revels in rawness.

Sneaks, aka Eva Moolchan, was previously a member of Shitstains, a short-lived band that attracted the attention of Katie Alice Greer, a co-founder of the influential DC label Sister Polygon and a member of the city’s preeminent punk outfit, Priests. Sister Polygon has nurtured the careers of, among others, Baltimore indie darling Snail Mail and the defiant rockers Downtown Boys, and the label took Sneaks on as a solo artist. Her debut, Gymnastics (later reissued by Merge Records), featured 10 threadbare, post-punk songs driven only by a drum machine, bass, and her part-sung, part-spoken-word vocals. In 2017, she released her second effort, It’s a Myth, another short and punchy compendium that proved her willingness to tinker with electronic production and faster tempos.

Highway Hypnosis arrives nearly five years after Sneaks began making music as a solo act, and the album finds her at her most freewheeling. She’s abandoned some of her minimalist tendencies and loaded up on textures and looped vocals, like a collage artist compiling assorted odds and ends to make a compelling, if somewhat disorganized, montage. The album, which Sneaks produced alongside her studio engineer, Carlos Hernandez, and the Brooklyn producer Tony Seltzer, boasts the acidity of Gymnastics and the strains of melody from It’s a Myth while expanding her range. After the dark, almost Lynch-like opener, Sneaks pumps up the bpm and bursts right into the art-house cut “The Way It Goes.” She positions the synth-pop haze of “Ecstasy” next, and revisits the punk edge of her first record with “Holy Cow Never Saw a Girl Like Her” toward the album’s end. The closer, “Hong Kong to Amsterdam,” flickers with kinetic club energy.

The songs cover a lot of ground, but they’re often jagged and capricious, either ending abruptly or dragging past their logical endpoint. That doesn’t seem to bother Sneaks; after all, her impulsiveness and need for variety fuel the album’s sudden turns. This eclecticism lets her change up her vocal delivery, which can shift from the Beat-like spoken-word chants of “Beliefs” to the gauzy vocalizations on “Cinnamon.” Her writing, she told the UK music magazine Loud And Quiet, comes “from my environment, lyrically: words, some of what sticks out in a commercial, or what sticks out in an ad, what words grab my attention. And then reusing that with a different meaning. With my own meaning.” It’s a style that’s a little Dadaist at its core as Sneaks uses made-up mantras, random words, and childlike rhymes to reject traditional song forms and introduce a bout of absurdity into her work. On “Saiditzoneza,” for example, she builds a rhythm by repeating an invented word with sing-song silliness. She’s smart about leveraging her ambiguous lyrics to bring out her production choices, too. Her plaintive call that “I think I need a little wiggle room” on “The Way It Goes” boosts the track’s intensity, and her dreamy line “running round the world with a planet of my own” reinforces the euphoric wooziness of “Ecstasy.”

In an interview with Paper magazine, Sneaks recalled that, when she was making Highway Hypnosis, she “was able to kind of just collect a bunch of things, and really reminisce on what I love about music.” The album courses with the kind of movement and dance energy that reflects the influences pushing Sneaks creatively: She spent time in Berlin as a participant in 2018’s Red Bull Music Academy, and some of the city’s live-wire electronic scene has certainly leaked into songs like “Hong Kong to Amsterdam.” But there’s little in the way of personal exposition, likely because narrative isn’t central to her mission of sonic nonconformity. Her messages are indirect, and the details require some digging. If a song titled “Addis” is about her Ethiopian heritage, she obscures any obvious readings with fuzzy percussion and faraway vocals. And when Paper wondered if “Money Don’t Grow on Trees” harbored an anti-capitalist message, Sneaks would only confirm that the song’s carefree abandon came out of the experience of living in Europe, away from the political turmoil in the United States.

Sneaks remains elusive. While artists like the Nuyorican rapper Princess Nokia—someone Sneaks calls an inspiration—push the boundaries with confessional lyrics and powerful declarations, Sneaks shows there are plenty of ways to break the rules and, in the words of her current label, Merge Records, join “the resistance forged by queer black feminists who create, explore, empower, conquer, and play bass.” Sneaks doesn’t try to guide her audience; she opens the door to her world and lets them interpret as they wish.

Even so, Sneaks doesn’t allow much time for exploration. No song on Highway Hypnosis makes it past the three-minute mark, which is pretty typical of the artist (her last two releases were 14 and 19 minutes long). Brevity carries an undeniable power; one of the best examples came last year when the Philadelphia rapper Tierra Whack dropped Whack World, an album that delivered entire narratives via 15 one-minute tracks. But where Whack jams big ideas into extremely small packages, Sneaks prefers to traffic in fragmented flashes—of what, it’s not always clear. The effect can sometimes feel unfinished and hurried, yet there’s an undeniable spontaneity that Sneaks creates as listeners attempt to keep up with her rapid-fire musings and motivations. She has so many ideas to get across, and her short, stripped-back experiments are one way to tackle them all.

If her latest album gets chaotic, it’s because Sneaks welcomes the messiness. She remains confidently punk in her ethos, more interested in spattering paint on a wall than delivering neat concepts to anyone. She’s on her own journey, and on Highway Hypnosis, she’s simply invited listeners along for the ride.