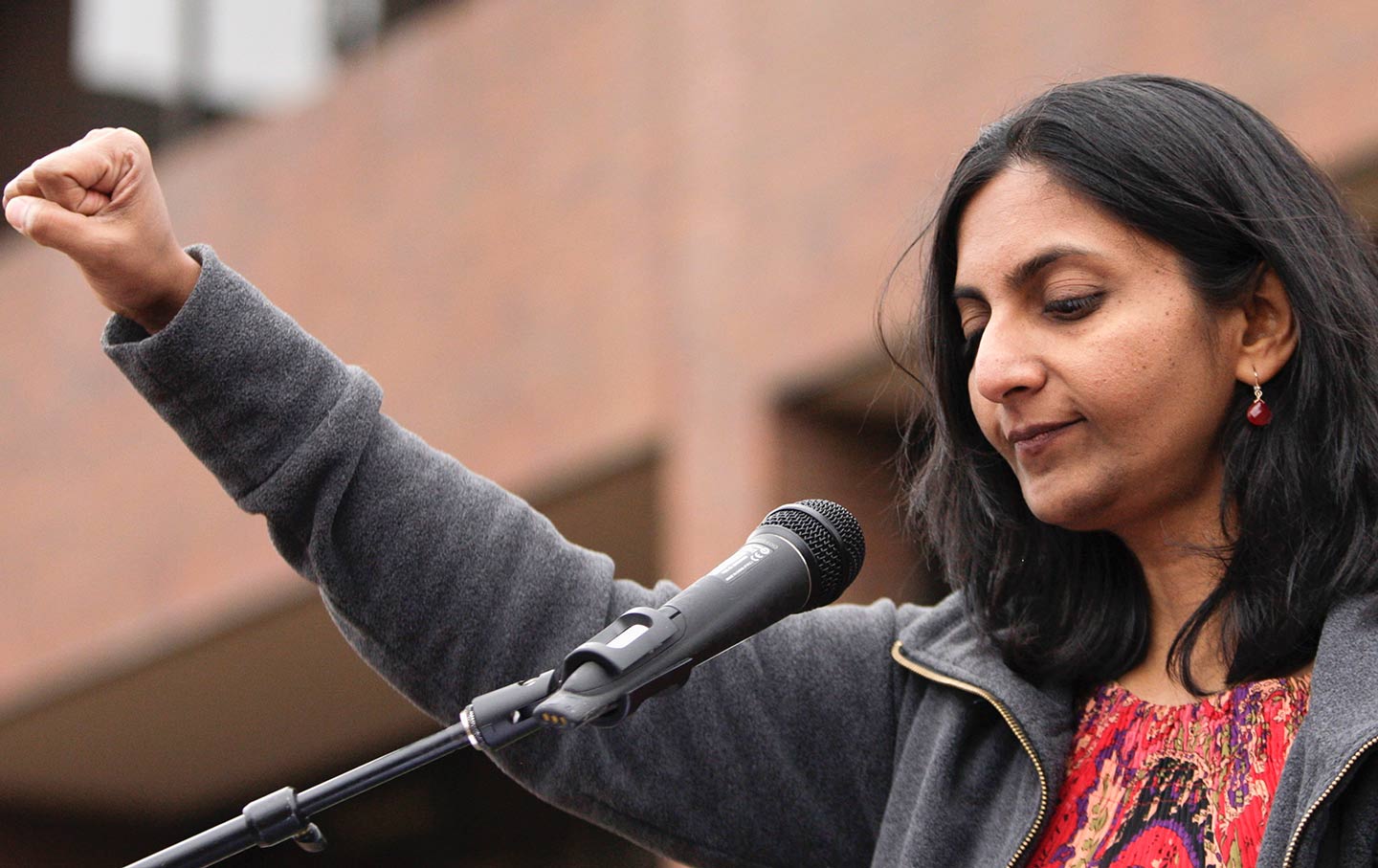 Last month Seattle City Council member Kshama Sawant was the lone woman of color on stage alongside her rival City Council candidate Egan Orion and three middle-aged white male moderators from local news stations. It took Sawant just two sentences to steer the debate to the issue at the center of her reelection campaign: the evils of big corporations. Six weeks from election day, Orion, a self-described progressive liberal, had highlighted the importance of bringing people together. Sawant did not disagree, but replied, “The crucial question is, unity and collaboration and coalitions with whom?” “My opponent is the poster child for big business,” she went on. “He has more corporate money than any candidate in Seattle City Council history. And we know what corporations like Amazon and the Chamber of Commerce are trying to do. They’re trying to flip City Hall to the right and reverse our progressive victories.”

She spoke quickly, and paused so rarely that you could tell she’d been interrupted far too many times in her life. She kept tying her answers to the threats posed by business interests. Based on the cheers, the audience appeared to be evenly split between Sawant and Orion. But at the end, when one of the moderators thanked Amazon, the event’s sponsor, a loud “Boo!” rang out.

On Tuesday, Amazon gave an additional million dollars to support business-friendly members of the City Council like Orion. The tech giant has now poured an unprecedented $1.45 million into the local elections, and ballots are being sent to voters this week. (Washington votes by mail.)

Sawant has long been an outspoken critic of large corporations, and it’s not surprising that she’s ended up in Amazon’s sights. During a contentious City Council meeting last summer, she called Amazon’s CEO Jeff Bezos the “enemy.” 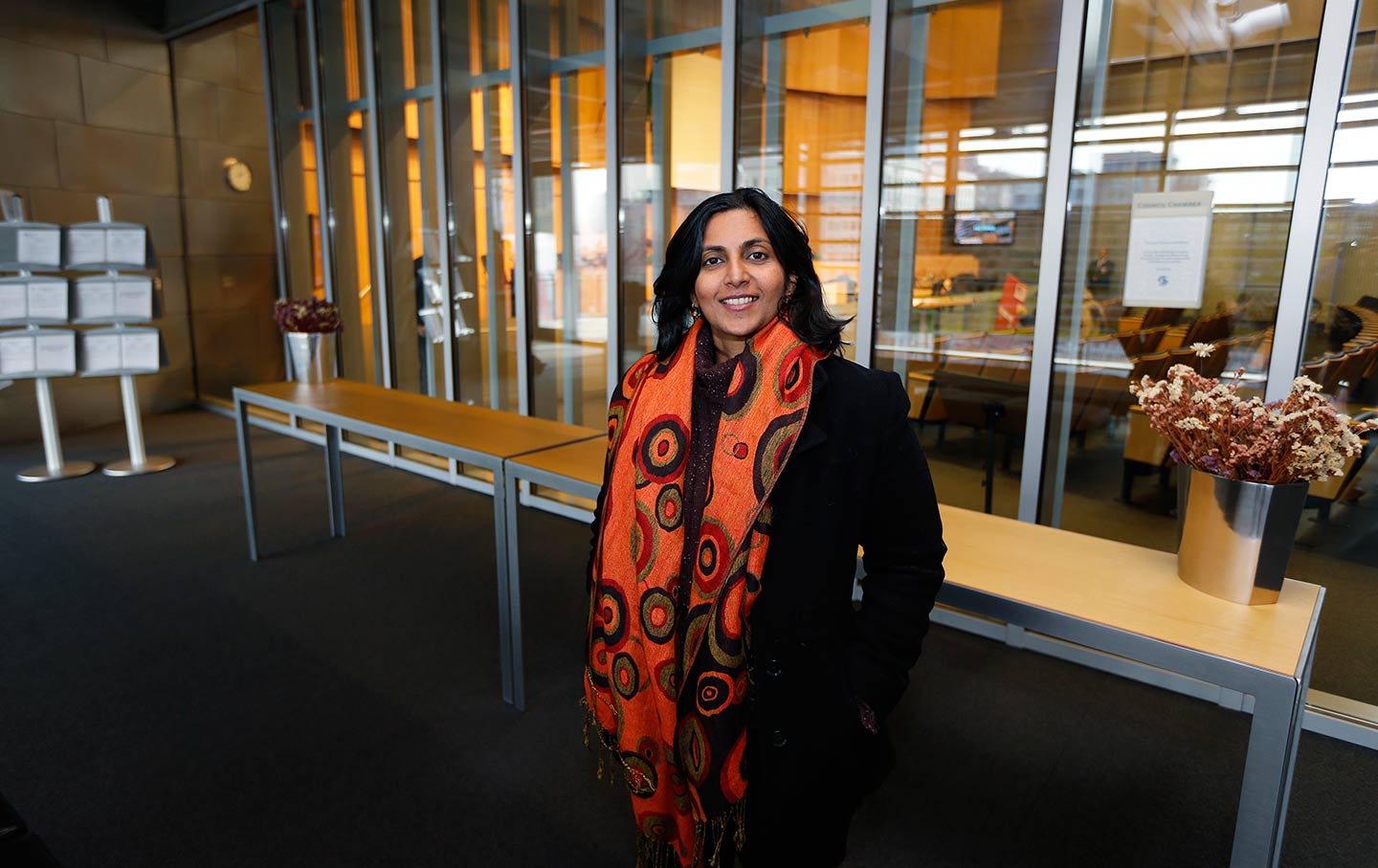 “What’s at stake this year is who gets to run Seattle, Amazon and big business and the Chamber of Commerce, or working people,” Sawant told me at Squirrel Chops, a socialist-owned coffee shop just blocks from her home.

Specifically, she is fighting for rent control, an expansion of affordable housing, and a transition to 100 percent renewable energy by 2030. When asked during the debate about whether she would revisit the “head tax,” a controversial, per-employee tax on large corporations that was repealed last year, less than a month after it was passed, she said she “would proudly push for it again.”

In the August primary to whittle the vote down to two candidates, Sawant won with 37 percent to Orion’s 22 percent. But since then, The Seattle Times endorsed Orion in a scathing editorial on Sawant’s leadership. “Seattle voters who love self-promoting, slogan-tossing, poor-performing politicians are in luck,” the piece said. “Not just because Donald Trump is president, but because Kshama Sawant squeaked through the primary, in pursuit of another City Council term.”

Orion is an LGBTQ community leader who in another election might be seen as a progressive candidate. He’s known for creating PrideFest Capitol Hill and as a small-business advocate. He previously served as interim executive director of the Capitol Hill Chamber of Commerce and is now the director of the Broadway Business Improvement Area. He considers affordability and homelessness Seattle’s two main issues, but disagrees with Sawant on the best ways to solve them. He is against Sawant’s rent control plan, arguing that it is illegal under Washington law and that it would reduce private housing development. He proposes a rent stabilization plan by which landlords would not be allowed to raise rent more than about 10 percent a year. He is also against the head tax, which he said did not have anywhere near enough support from voters. And to address homelessness, he wants to create an emergency fund to help people keep their homes during a crisis and for the City to partner with King County to produce 1,500 units of permanent supportive housing.

“I don’t think that I’m unique,” he told me. “I think that if even Alexandria Ocasio-Cortez had run against Kshama Sawant, Sawant could find a way to make her be the tool of big business. I think that what council member Sawant is really interested in is growing this national movement for the Socialist Alternative party.”

Six years ago, Sawant, a Mumbai-educated economist and former software engineer, ran as part of the Socialist Alternative on the slogan “Fund Human Needs, Fight Corporate Greed.” Her campaign focused on raising the minimum wage to $15 an hour and implementing rent control. In 2013 she became Seattle’s first socialist to occupy a council seat in nearly a century. Within a few weeks in office, she recalls, two “corporate” City Council members came to her office to inform her that City Hall runs on their terms and that she was never going to win any major victories.

The conversation clearly did not have the intended effect. Sawant doubled down on her ideals. Within months, she had helped to lead the grassroots movement to get the minimum wage legislation passed.

She’s had other smaller victories in the years since, including helping to rename the second Monday in October “Indigenous Peoples’ Day” in Seattle and to sever the city’s relationship with Wells Fargo Bank in protest of its role as a lender to the Dakota Access Pipeline project. But she’s also been less successful in other areas. She’s been advocating for rent control for the last six years without much progress—although she has helped to give tenants access to a move-in-fee payment plan and prohibited landlords from raising rents on substandard homes. Last month, she also proposed a new plan that would limit rent increases to the rate of inflation.

But it was in her push for the “head tax” that she really clashed with major corporations. Sawant helped to lead the battle for the tax on corporations grossing at least $20 million annually. In a city that has been in a state of emergency over homelessness for four years, the funds from the tax were expected to go toward additional housing and services for the homeless. It passed in May with unanimous support from the nine-member council. But Amazon, Starbucks, and other companies pushed back. They contributed tens of thousands of dollars to the “No Tax on Jobs” campaign to squash the tax. The campaign was gearing up to submit the signatures needed to get the referendum on the November ballot when the City Council came together for a vote to repeal the tax. Within a month after its passage, all but two of the council members (Sawant and Teresa Mosqueda, who is not up for reelection this year) voted to repeal it. Amazon did not respond to a request for comment, but released a statement after the repeal that said, “Today’s vote by the Seattle City Council to repeal the tax on job creation is the right decision for the region’s economic prosperity.”

During the council meeting addressing the repeal, Sawant called it “kowtowing to big business and to corporate politicians.” She said later, “I think we have to understand that the logic of bending to big business points only in one direction, which is a race to the bottom for the rest of us.”

Fast forward to Sawant’s current reelection campaign. Amazon has donated huge sums to the Seattle Metropolitan Chamber of Commerce PAC. The Amazon-backed PAC is backing challengers against all but one of the three incumbents running for reelection, which has left many predicting that the City Council is going to look a lot different next year. The Washington Technology Industry Association, the state’s largest tech trade group, which this year endorsed political candidates for the first time, also backed Orion. Top executives at Amazon, Boeing, and Microsoft have donated to Orion’s campaign, including Jay Carney, the PR and policy chief for Amazon and former White House press secretary to President Barack Obama; and Sam Whiting, director of Boeing Global Engagement. “It’s clear now to the majority of people that big corporations like Amazon are absolutely going to war against ordinary people in this city, in this election, and are attempting to buy this election,” said Sawant.

When asked if Orion felt comfortable with executives’ donating money to his campaign, he responded with his own question: “Are you referring to my neighbors? There’s a large number of Amazon executives that live in district 3.”

Sawant told me she sees the support from Amazon and corporate executives as having both a positive and negative impact on her campaign. Although it has resulted in a lot of resources’ going to her opponent, it has also helped to galvanize her base. She has raised more than $380,000 from thousands of donors, many of whom are based outside Seattle, according to the Seattle Ethics and Elections Commission.

Sawant says she doesn’t want to push corporations out of Seattle. These companies provide tens of thousands of jobs for local residents, and, she said, if they were to move, they could go somewhere where “workers are more poorly paid, have fewer labor laws protecting them, and where the labor market is weaker.” No, she wants to change the situation from the inside by making the city’s tax system more progressive and strengthening labor laws.

It’s not an easy fight, but she said she’s ready. Sitting outside the socialist-owned coffee shop, she lists such historic battles as the fight to end slavery and the civil rights movement, and then brings up her own $15 minimum wage victory. “None of that came by successfully building consensus with those that benefit from exploitation,” she said. “It required a struggle against them. We should not shy away from that struggle. We should embrace that struggle.”