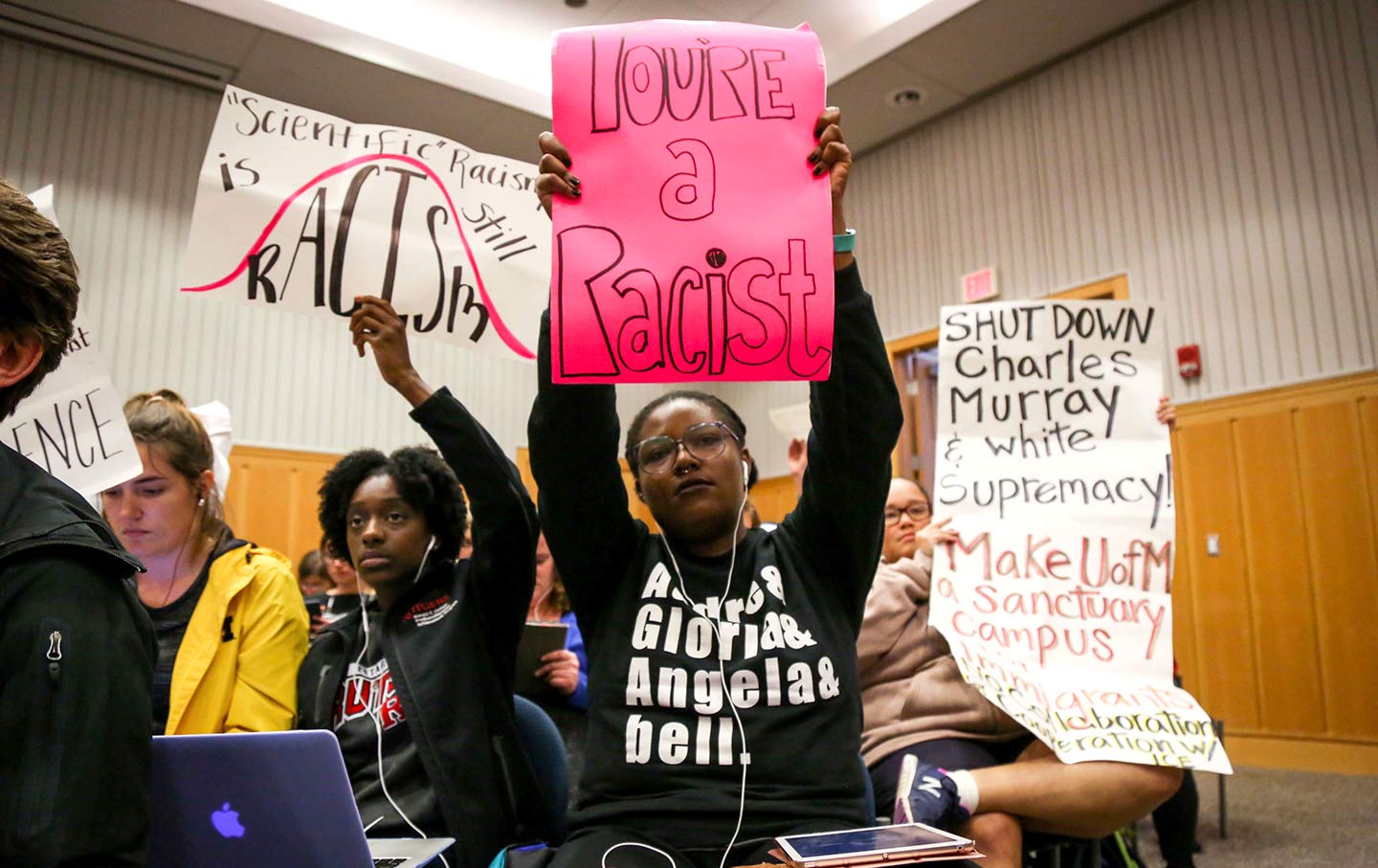 Students protest a speech by author Charles Murray, who co-wrote a book discussing racial differences in intelligence, at the University of Michigan in Ann Arbor on October 11, 2017. (AP Photo / Hunter Dyke)

Judging by the headlines, pseudo-scientific racism is making a comeback. Nineties-relic Charles Murray (The Bell Curve) is popping up on campuses and in conservative media outlets, much to the delight of those who think his graphs confer legitimacy to their prejudices. Atheist philosopher and podcaster Sam Harris is extolling Murray’s highfalutin version of racist graffiti as “forbidden knowledge.” New York Times’ increasingly off-the-rails op-ed page gave genetics professor David Reich the opportunity to write that “it is simply no longer possible to ignore average genetic differences among ‘races.’” And Andrew Sullivan, as ever, is fervently repackaging Gilded Age eugenics for a 21st-century audience.

They and the “intellectual” tradition they represent have allies in high places now. When President Donald Trump told members of Congress in February that the country needed fewer immigrants from “shithole” countries and more from countries “like Norway,” I did a double-take. Having studied what’s now called “the racialist movement” that stretches from Charles Darwin to the outbreak of World War II, Trump’s language was nearly identical to the rhetoric of Nordic superiority during that period.

Trump’s no reader; he almost certainly didn’t pick up those phrases from a historical text. He simply channeled language that never went away. The narrative that Americans repudiated scientific racism after it was tainted by its associations with Nazi Germany is an alluring but unsupportable myth. Trump said out loud what many Americans have quietly believed for decades. Emboldened by the xenophobic, nationalist, and racist discourse that has found increasing mainstream acceptance in the United States and Europe, true believers and opportunistic hucksters are now emerging to cash in with “race and IQ” clickbait and put an imprimatur of truth onto racism.

Names like Alexis Carrel, Madison Grant, Lothrop Stoddard, and Ernst Rüdin mean little today. But a century ago, they were in the top tier of public intellectuals—the Neil deGrasse Tysons and Carl Sagans of their age. They stood at the confluence of three popular trends at the turn of the century. One was scientific racism—the attempt to leverage reason and the scientific method to “prove” the inherent superiority of the white, northern European race (a conclusion that conveniently doubled as the premise). The second was eugenics, which represented the misappropriation of Darwinian evolution to human social outcomes. Third was rising apprehension at the immigration feeding the transition of the United States from an agrarian backwater to an industrial colossus. 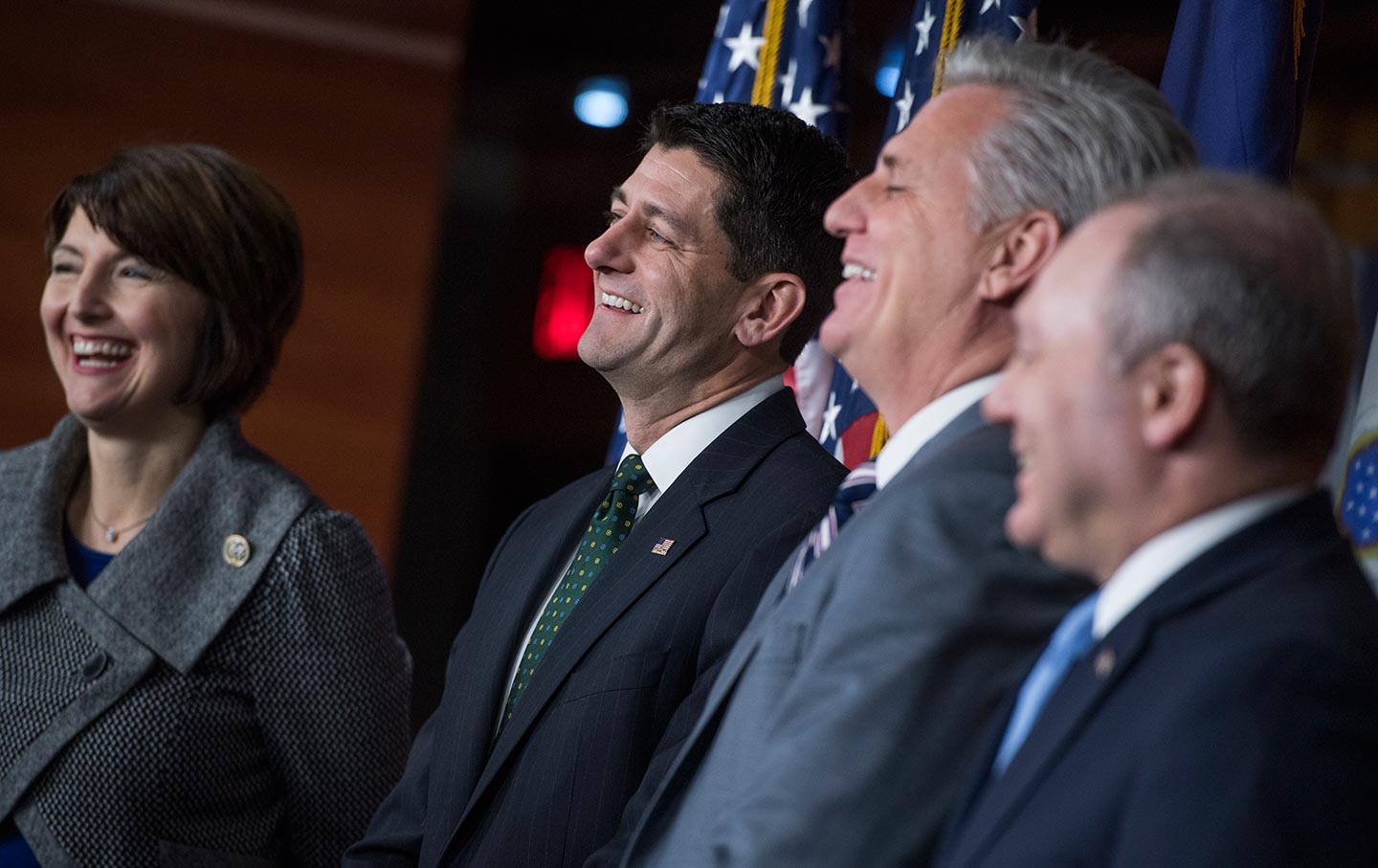 Darwin’s theory of evolution was never intended by its author to explain outcomes in complex human societies. Yet it was inevitable as his ideas took the world by storm that they would be misinterpreted, intentionally or otherwise. The subtitle of On the Origin of Species—“Or the Preservation of Favoured Races in the Struggle for Life”—was tantalizing to people who very badly wanted to see “favoured races” in the shifting world order of the era.

It was Darwin’s half-cousin Francis Galton, who coined the term “eugenics,” and his theories of biological determinism that bridged Darwinian natural selection and human beings. Soon Herbert Spencer’s phrase “survival of the fittest” became the zeitgeist of the era, and the logic of Social Darwinism took second place only to capitalism as the American civic religion. The moral imperative for the weak to perish and the strong to survive was applied to the economy, international relations, politics, social classes, and the hard sciences. Just as America would rise above and crush the weaker nations of Old Europe, so too would the races settle into a natural order in which the dominant ethnicity of the elite class (Anglo-Saxon, Germanic, and northern European) would prove with finality its superiority over the lesser peoples (everyone else).

For self-styled scientists, reactionary writers, and various con men who could recognize the moment, a synthesized narrative that could appeal to both high- and lowbrow audiences was available: Foreign hordes were overwhelming America; science proved certain races are superior; and the immigrants were mostly inferiors who would “weaken the stock” of the American race.

The racialist and anti-immigration movements achieved their great victory with the passage of the restrictive Immigration Act of 1924, which effectively ended the era of mass European immigration. But the eugenics movement was just getting started. It surged in popularity in the 1920s and 1930s—Adam Cohen details its suffusion into American law in his 2016 book Imbeciles—and attracted weighty supporters like Henry Ford, Charles Lindbergh, John Maynard Keynes, Helen Keller, Margaret Sanger, Woodrow Wilson, and others.

The American eugenics movement was a major influence on Nazi Germany’s eugenic and racial ideology. Hitler and his regime were willing to turn its most extreme tenets into state policy, which delighted scientific racists who wondered why the United States was not more aggressive. In 1934, Joseph DeJarnette, the superintendent of Virginia’s Western State Hospital, told the Richmond Times-Dispatch, with a mixture of envy and admiration, “The Germans are beating us at our own game.”

Ultimately, the association with Nazism is often said to have led to the repudiation of eugenics and theories of racial superiority at the conclusion of World War II. If true at all, this assertion applied only to scientific and cultural elites.

With time and changing mores, many Americans learned that some ideas about race could no longer be aired in polite company. Recent events, however, call into doubt any assertion that racial pseudoscience ever really went away. Official repudiation is one thing; dissemination throughout a society with major, obvious, and persistent problems with racial inequality is another. We see how readily Americans reject the scientific evidence of things like climate change or vaccination, and it is easy to imagine selective acceptance of scientific research on race being at least as popular, if more private.

As nationalism, authoritarianism, xenophobia, and free-market Social Darwinism are not only normalized but actively cheered in public, people who harbored the once-popular tenets of scientific racism feel emboldened to speak up. Trump, his Republican abettors, the European far right, and race-science peddlers are taking gleeful advantage of shell-shocked media desperately trying to reconcile their fetish for “ideological diversity” with increasingly virulent rhetoric from the right.

It is tempting to frame the current prevalence of racialism—immigration restriction, scientific racism, and eugenics—as a revival. In truth, it never went away. It was in hibernation as intellectuals, scientists, and political elites rejected the ideas after World War II. Adherents were simply waiting for the right time, the right social and political climate, to emerge from with their long-discredited and bigoted pseudoscience. It is not hard to see why they believe the right time is now.