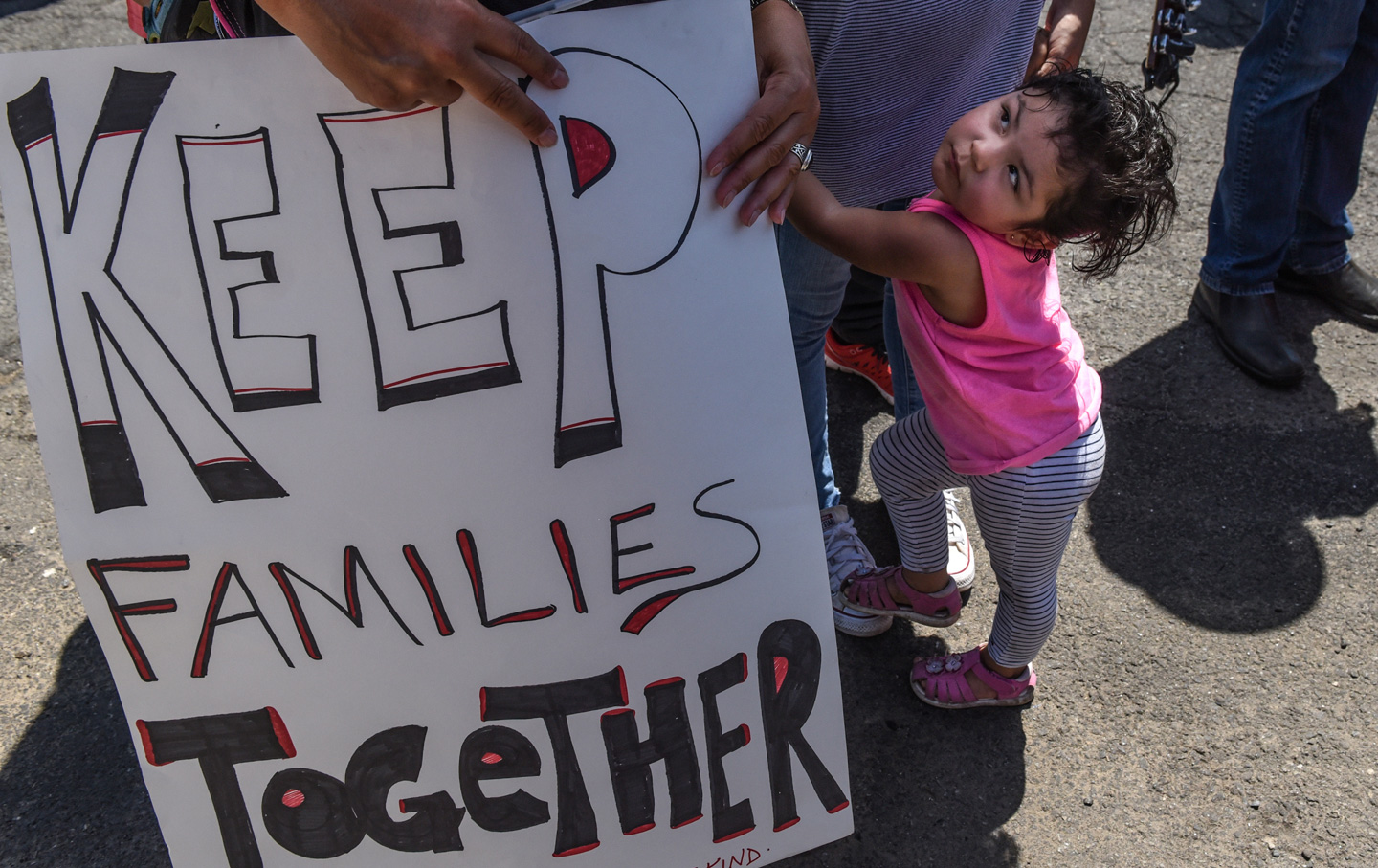 For the past few weeks, the news has been rightly fixated on the harrowing accounts of immigrant children being separated from their families at the border. Last night on All In with Chris Hayes, Congresswoman Pramila Jayapal and Ai-jen Poo [disclosure: we’re married] of the National Domestic Workers Alliance announced Families Belong Together marches in Washington, DC, and across the country on June 30.

Reading the stories, it’s hard to imagine anyone not having sympathy for the parents and children who have been torn apart. Yet, while many Americans believe Donald Trump’s zero-tolerance policy to be cruel and unnecessary, the administration is also counting on a number of Americans to ask: What about my own family? Seeing millions rally for immigrant children newly arriving to the United States, some may want to know what’s being done for the families that are already here who can’t make ends meet.

It’s a valid question—but one that too often results in a race to the bottom that hurts all workers and their children.

Over 10 years ago, I had an experience that shaped my understanding of this dilemma. I got a call informing me that over 500 ICE agents had descended on Michael Bianco Incorporated, a leather factory in New Bedford, Massachusetts, detaining 361 workers. As a community organizer, I was asked to support a response to the raid. When I arrived at Our Lady of Guadalupe Parish in New Bedford, I found children crying throughout the church—not because of hunger or exhaustion, but because they had just learned that one of their parents was gone. One small child, Tomasa Mendez, stood out. ICE agents took her father. A photograph of the 2-year-old’s fear stricken face became a rallying cry to stop the separation of families. Her image reappeared on Twitter this month, alongside fresh images of children ripped from their parents.

While much of New Bedford’s response was compassionate, there was also a backlash. Talk radio reported a flood of calls. “What about us? That’s what they want to know,” said WBSM conservative talk-show host, Evan Rousseau. “They want to know why no one is asking them, citizens and legal immigrants, how someone legally can work 50 hours a week and still have trouble buying groceries for their family.”

Many saw the raid as progress: Surely this would open up jobs for native-born workers. And initially, it did. Three hundred new workers were hired at the factory. Elected officials hailed this a victory for working families.

But that triumph was short-lived. Alliant Techsystems soon acquired the plant and announced it would move operations to Puerto Rico, where it could pay lower wages. Within two years, the 300 workers hired to replace the 361 undocumented workers were let go. Ten years later, the factory was still empty.

New Bedford is no stranger to the race to the bottom. In 1928, the city attracted national headlines when 30,000 workers went on strike after the Manufacturers’ Association tried to cut back production by 20 percent. New Bedford mill bosses voted for a 10 percent wage cut. Consequently, the workers voted for a stoppage. The strike lasted nearly seven months, but because of lower wages in the less-unionized South, they were forced to accept a 5 percent cut.

This is an all-too-familiar story for American workers. Big corporations cut wages as they seek to reap bigger profits. They replace one set of workers with another—from other regions or other countries—or by automating work. Meanwhile, CEO pay and bonuses continue to rise while workers’ wages fall. When you are scrambling to find work or getting beat out for a job by someone willing to work for less, there’s an allure to an anti-immigrant stance. But taking that bait doesn’t get us very far.

Migrants seeking asylum and immigrant workers aren’t pulling the strings of our rigged economy. Those making the decisions that cause economic hardship can more likely be found at Mar-a-Lago, not at the border. If we don’t focus on holding the ultra-rich and greedy corporations accountable, workers will continue losing. All the raids in the world will not help native-born and documented workers with job security.

This false notion that we are in competition with immigrants limits our ability to see each other, even when the collateral damage is children. At this moment, wealthy corporations and billionaires, not immigrant children and their parents, are sacrificing workers for profits. We should see this as a warning. When people are so dehumanized that forcing kids to sleep in kennels becomes acceptable, the value of life for everyone goes down.

Instead of scapegoating children, mothers and fathers, we should reconnect with our humanity and demand change from the true source of our hardship: an out-of-control corporate class. Let’s be clear: We have found the culprit, and it’s not our fellow workers and certainly not children.