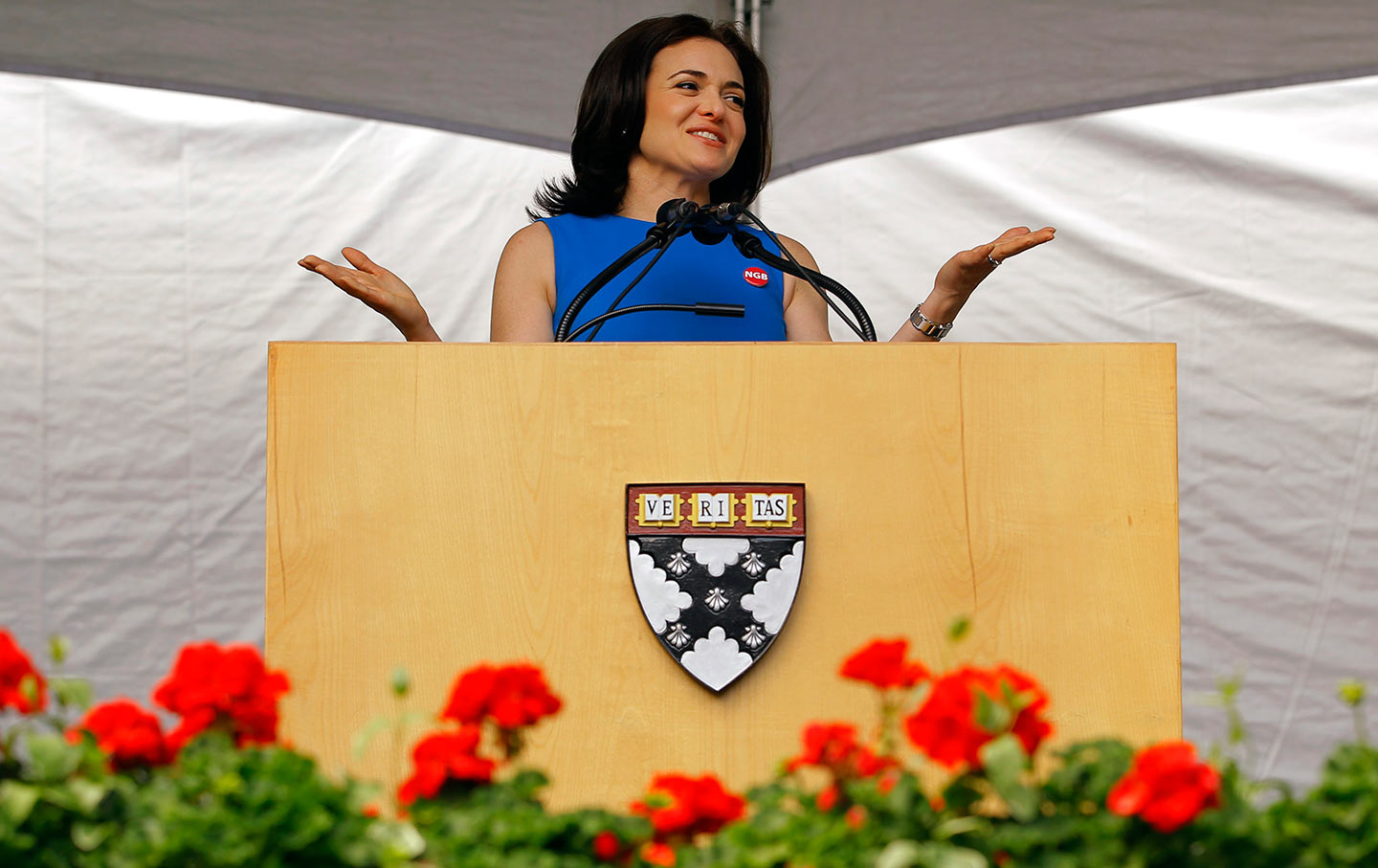 Five years after its publication, Facebook COO Sheryl Sandberg’s corporate feminist manifesto, Lean In: Women, Work, and the Will to Lead, is back in the news—although, perhaps, not how she ever envisioned it would be.

Just six months after the Cambridge Analytica scandal broke open Facebook’s shoddy oversight of user data, an explosive New York Times investigative report revealed that Sandberg, along with CEO Mark Zuckerberg, downplayed Russia’s interference in the 2016 US election, ignored warnings that the platform was being used as a propaganda tool for ethnic cleansing, and engaged its own disinformation campaign, taking brass knuckles to America’s battered and increasingly vulnerable democratic institutions.

Sandberg hired Republican operative Joel Kaplan, who pushed for a hands-off “free speech” approach while trolls planted conspiracy theories that rapidly spread across the platform. Sandberg also allied with Senate Democratic leader Chuck Schumer, who raked in donations from the company while cajoling his own caucus to lay off interrogating its executives.

Lean In hit the market in 2013 with Gloria Steinem’s endorsement and a social-media campaign featuring Beyoncé. It sold more than 4.2 million copies worldwide, spawning book clubs and debates among feminists about its merits and flaws. Sandberg preached practical solutions to navigating systemic bias in the corporate world: use “we” instead of “I” in salary negotiations, gently guide your partner to taking on half of the household duties. Her basic premise was that “more women in power” was good for all women and, by extension, the world.

Not everyone bought it. Melissa Gira Grant called it “trickle-down feminism” in Jacobin, while Judith Schulevitz opted for “Davos feminism” in The New Republic. At the same time, a number of prominent feminists lined up in Sandberg’s defense: Jessica Valenti argued that “feminism could use a powerful ally” in The Washington Post, and Rebecca Traister advocated to “credit that Sandberg has chosen to announce herself, smartly and vociferously, not only as a woman but as a feminist.”

Last week’s damning report about Facebook’s actions ended that conversation for good. Jezebel snarked about “leaning out,” The Atlantic chided Sandberg for actions that “just don’t mesh with the girl-power clichés that pepper her book,” and Jessa Crispin, in The Guardian, contended that: “Feminists gave Sheryl Sandberg a free pass. Now they must call her out.”

Barbara Ehrenreich tweeted: “Thanks to Sheryl Sandburg, this is the end of corporate feminism. Whatever the hell that was supposed to mean.”

Much of the controversy was located in Sandberg’s framing Lean In as more than mere career advice: climbing the corporate ladder as a feminist cause. In a prelude to the book, Sandberg delivered a commencement address at Barnard College in 2011. She mixed invocations of noblesse oblige, reminding graduates of their “privileged” status and responsibility to change the world, with tough-talk about harsh realities (“men run the world”) and sly promos of her employer (Facebook, she told graduates, wanted to “connect the whole world” and make it “more open and more transparent”).

“I hope that you—yes, you—each and every one of you have the ambition to run the world, because this world needs you to run it,” she told that graduating class. “Women all around the world are counting on you.”

Sandberg has achieved this goal, but it goes without saying that she’s made the world worse, not better. Years after she graced the covers of Fortune, Forbes, and Time—“Don’t Hate Her Because She’s Successful: Facebook’s Sheryl Sandberg and her mission to reboot feminism”—America has started to sour on tech’s empty idealism in all its forms. Silicon Valley executives shield their own kids from the very products earning them billions, while the underclass they promised to connect keep clicking. And fake news about the youngest woman elected to Congress is still ricocheting around Facebook with eye-popping engagement.

In the end, as Sandberg stared down her career, the demands of capitalism overtook that of feminism.

Even if Sandberg single-handedly illustrated the hollowness of her very own credo, there’s more cleanup to do still. While Lean In has faded from the conversation, its commercial success casts a long shadow. In dislocating feminism from its more radical promise—dismantling the patriarchy—it spawned an entire genre in its likeness. In 2017, Ivanka Trump published her own brand-burnishing manifesto, Women Who Work: Rewriting the Rules for Success, which copied the Lean In format by mixing personal anecdotes with spunky how-to advice, along with a resource website. And Megyn Kelly gave her 2016 memoir a similarly upbeat girl-power mantra: Settle for More.

Conservatives trumpeted Kellyanne Conway for being the first female to successfully run a presidential campaign, and Cindy Hyde-Smith, recently in the news for making a public hanging joke, for her potential as the first woman to represent Mississippi in either chamber of Congress. When critics skewered Gina Haspel for her record on torture, White House Press Secretary Sarah Sanders, tweeted, “There is no one more qualified to be the first woman to lead the CIA than 30+ year CIA veteran Gina Haspel. Any Democrat who claims to support women’s empowerment and our national security but opposes her nomination is a total hypocrite.”

This brand of fake feminism, of course, has little to offer the immigrant women whose children were forcibly removed at the border, still hundreds held in cages, nor those denied access to basic reproductive-health care or even the aspiring Lean In–ers struggling with crushing student debt. As it turns out, putting any woman in power may not be good for all women, after all.

When Lean In debuted, feminist theorist bell hooks warned on Feminist Wire: “It is this patriarchal male dominated re-framing of feminism, which uses the body and personal success of Sheryl Sandberg, that is most disturbing and yes threatening to the future of visionary feminist movement…. Sandberg uses feminist rhetoric as a front to cover her commitment to western cultural imperialism, to white supremacist capitalist patriarchy.”

Hooks turned out to be right. Try to pull yourself up by the pantyhose and they will assuredly rip. Sandberg may no longer lay claim to the feminist mantle, but the rest of us will be dealing with the wreckage she’s made of a movement and democracy for a very long time.