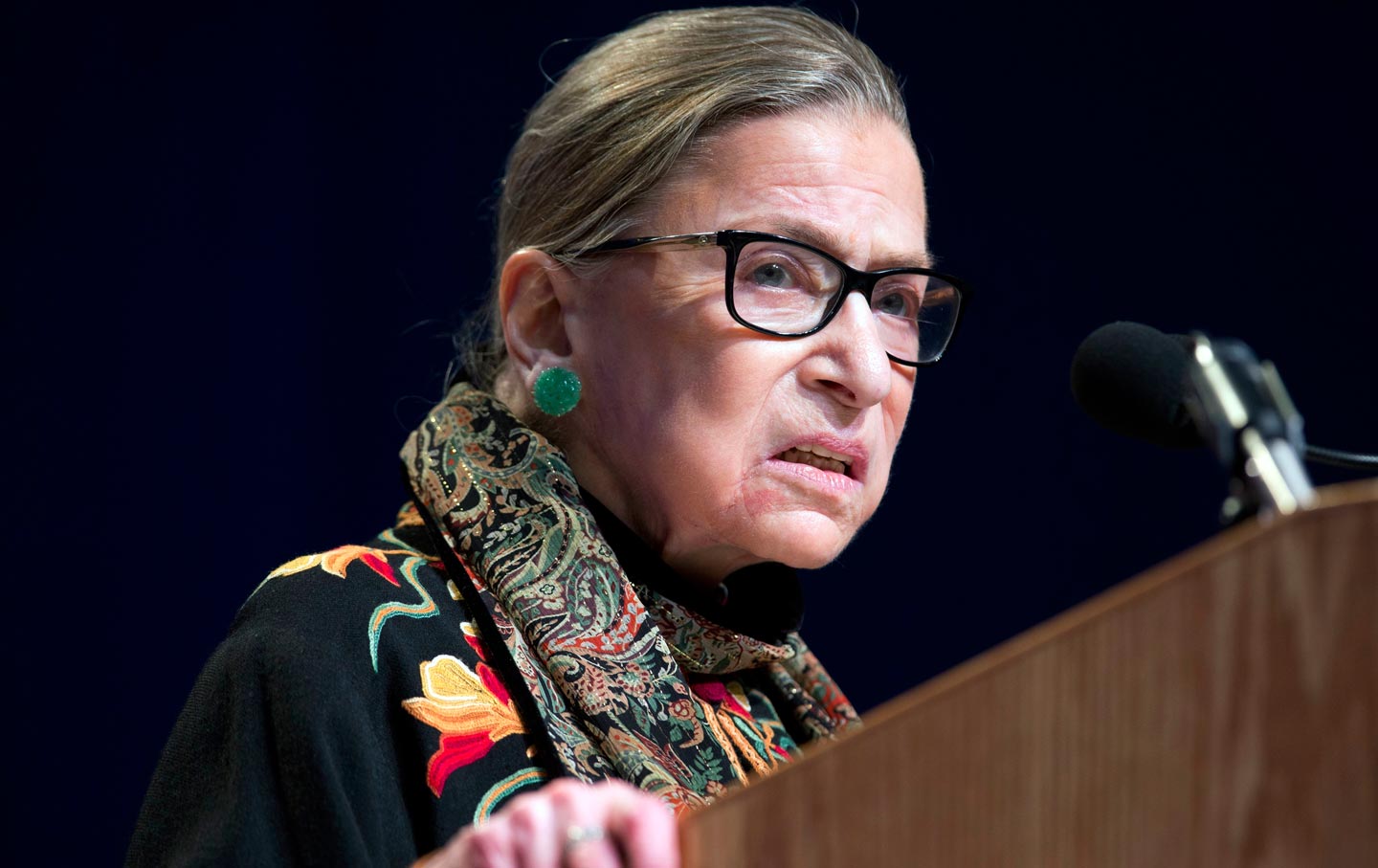 There is perhaps no liberal in the land held in higher esteem than Supreme Court Justice Ruth Bader Ginsburg. “The Notorious RBG,” as she is known, is the first Supreme Court justice to have not merely admirers but actual fans. Whether or not one believes she has earned this iconic status really depends on whether you think SCOTUS decisions are the result of the sage judicial reasoning of the nine—or eight—individuals in black robes or a political reflection of social movements and shifts in public opinion.

For all her lefty street cred, in recent comments about Colin Kaepernick’s anthem protests against police violence the progressive champion sounded anything but. Speaking on Yahoo News to Katie Couric, Ginsburg said of all the athletes, bandmembers, and cheerleaders taking a knee: “I think it’s really dumb of them. Would I arrest them for doing it? No. I think it’s dumb and disrespectful. I would have the same answer if you asked me about flag-burning. I think it’s a terrible thing to do. But I wouldn’t lock a person up for doing it. I would point out how ridiculous it seems to me to do such an act. If they want to be stupid, there’s no law that should be preventive. If they want to be arrogant, there’s no law that prevents them from that. What I would do is strongly take issue with the point of view that they are expressing when they do that.”

There is a great deal to unpack here.

First, I am less struck by the words “dumb,” “stupid,” and “arrogant” than by the words she does not say: “police,” “racism,” “injustice,” or “death.” There is no reckoning with the reason why so many people feel driven to kneel in protest and raise their fist in the name of black lives. It’s as if she doesn’t take this seriously; as if Colin Kaepernick is taking a knee because he’s a bud of Ashton Kutcher and this is all just an elaborate reboot of Punk’d.

I also find it disturbing that she would even broach the idea of arresting people for taking a knee, even if to say that she wouldn’t be for it, as if that should in any way be a legitimate part of this discussion.

It is stunning that a person who has demonstrated such erudition, thoughtfulness and, when necessary, righteous rage, can be so slapdash, condescending, and completely absent of empathy. As former NFL player Shannon Sharpe said, “I would ask Justice Ginsburg that when you see a man crying, don’t tell him to stop crying. Ask him, say, ‘Sir why are you crying?’”

These comments reveal a gap between the Notorious RBG’s reputation and the views of the actual human being beneath the robe. If there is one word to sum it up, it would be the term she uses to describe Kaepernick: arrogant. It is arrogant for a Supreme Court justice to make no mention of the ways in which the American legal system has failed black Americans, especially the families of those whose loved ones have been killed by a police officer’s bullets.

On Tuesday Kaepernick spoke out in response to to Ruth Bader Ginsburg’s criticism:

“It is disappointing to hear a Supreme Court justice call a protest against injustices and oppression ‘stupid, dumb’ in reference to players doing that.… I was reading an article and it refers to white critique of black protests and how they try to de-legitimize it by calling it ‘idiotic, dumb, stupid,’ things of that nature, so they can sidestep the real issue. As I was reading that I saw more and more truth how this has been approached by people in power and white people in power in particular…. At the end of the day the flag is just a piece of cloth and I am not going to value a piece of cloth over people’s lives. That’s just not something I can do, it’s not something I feel morally right doing and my character won’t allow me to do that.”

Whether you love or hate the San Francisco 49ers quarterback, his political principles and actions are anything but arrogant. He has enough money and fame to live in a bubble that could reflect his most bacchanalian dreams. Instead, he is risking his precarious place in the sports world by choosing this moment in his career to stand up. That’s not arrogance. It’s conviction. To even call Kaepernick “arrogant” sounds much too close to “uppity” for comfort.

She is entitled to her opinion, but this isn’t a court of law. Any liberals who feel squeamish about criticizing Bader Ginsburg for her comments should straighten their spines and stand resolutely against her views. If we want to see justice in this country, it won’t be the last time we will have to stand up to the Supreme Court, no matter who is on the bench.