Kirkland, Washington, resident Lisa Davis shows how she has her car set up to live in the church parking lot she shares with two dozen other vehicles and their occupants on March 5, 2018. (AP / Elaine Thompson)

After serving a two-year sentence for methamphetamine possession, Holly Phelps had nowhere safe to live. Phelps found a job working at a laundromat in Marion, Illinois, but she couldn’t earn enough to rent a place for herself and her daughters, then 11 and 12 years old. Her ex-husband was gone. Her mother lived an hour away, but was struggling with alcoholism, so it wasn’t a stable home for Phelps and her daughters.

“I had no healthy place to go. I didn’t know if I was coming or going. I was keeping my stuff in a shed, going all over the place—and no one understood what I was going through,” she said.

Phelps spent more than two years bouncing from place to place, before the Southern Illinois Coalition for the Homeless (SICHome), an advocacy group that serves rural counties, helped Phelps find a rent-subsidized apartment in Marion, where she and her daughters now live.

For those two years, Phelps and her two children had no dependable, secure shelter. But since she wasn’t sleeping on the street or in a shelter, she didn’t meet the Department of Housing and Urban Development’s definition of “homelessness,” and therefore wasn’t eligible for any emergency-shelter grants. She and others in rural areas make up what advocates and social workers call “the hidden homeless”—individuals and families who don’t have permanent housing but aren’t sleeping rough in a big city. Compared to the urban homeless, this population has less access to shelters and supportive services and are rarely counted, making them all but invisible to policymakers. A new study from the Institute for Children, Poverty, and Homelessness (ICPH) suggests that while the federal government has reduced homelessness in many urban areas, the crisis of the hidden homeless in rural America is getting worse. 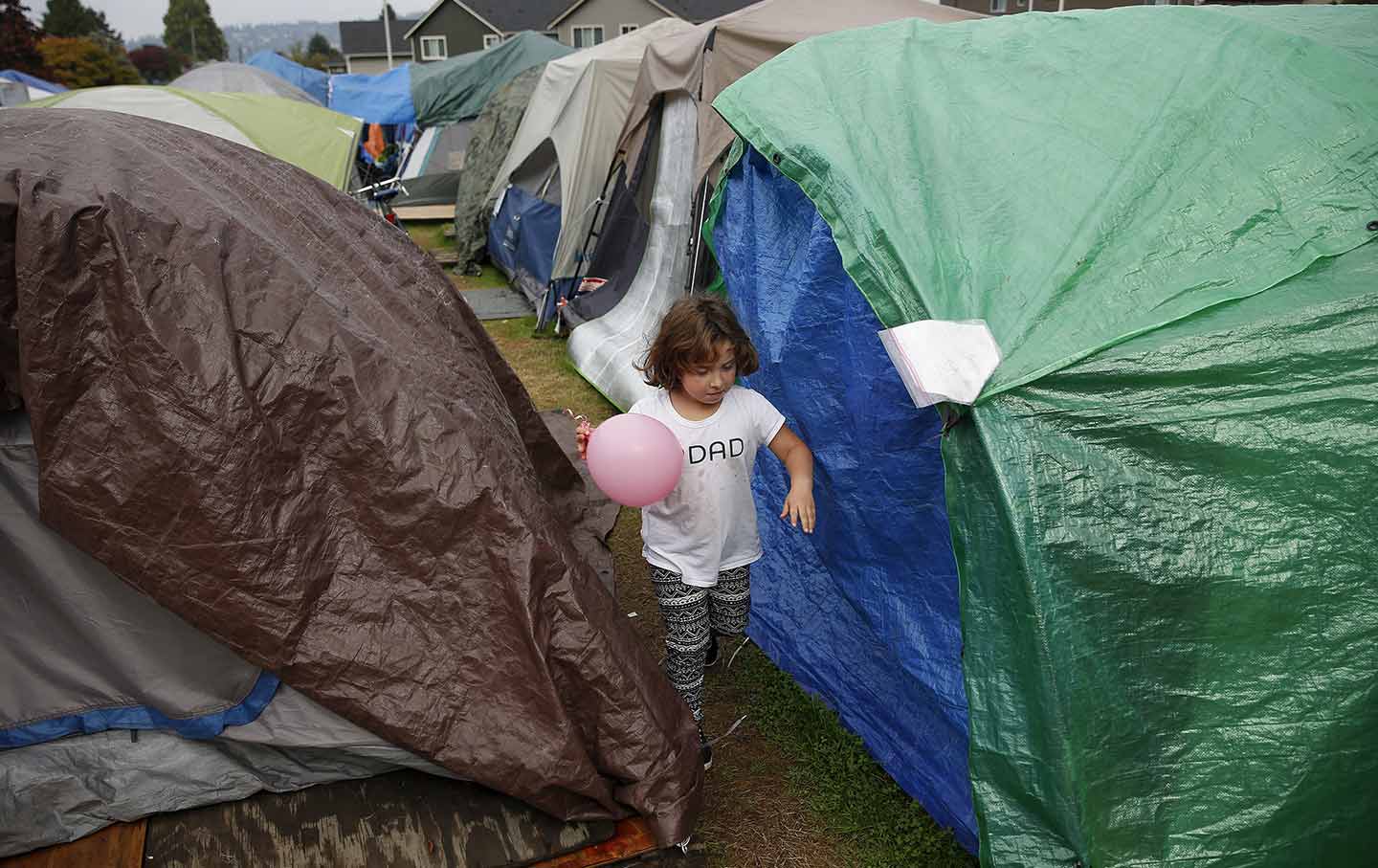 We Know How to Cut Child Poverty in Half. Will We Do It?

“When people think of homelessness, they think of a person sleeping on the street in a major city,” said Angie Lyon, program coordinator at Hancock Hope House, a shelter serving four rural counties in central Indiana. “But the reality is more complicated. We have people who are bouncing from couch to couch, who live in their car, who live in motels—but in general they have fewer places to go and fewer people trying to help them.”

Nobody knows for sure how many people in the United States are in situations similar to Phelps. This is not only because rural homeless populations are difficult to count, but also because HUD makes no serious attempts to count them. The department measures homelessness by conducting an annual volunteer-led census every January of people who are in shelters or sleeping on the street.

In bigger cities, this means volunteers search a few square miles each for people sleeping on the street. It’s not a perfect system, but it’s useful for determining the scope of chronic homelessness—the individuals who don’t have shelter or temporary housing, even during the coldest month of the year.

In rural areas, though, the census is much harder. Volunteers cover huge swaths of land, much of it unlit and inaccessible by car. It’s impossible for service providers to know how many people they’re missing each year. Furthermore, homeless people in rural areas are far more likely to couch-surf, stay in hotels or motels, or live “doubled up” with another family—all situations that are excluded from HUD’s census. The department’s census last year showed that homeless people in rural areas made up 15 percent of the total homeless population, but this is almost certainly a significant underestimate.

An ICPH study published in February, though, provides a new window into the issue. By using Department of Education data, which has a more inclusive definition of homelessness, the researchers showed that since 2013 rural homelessness among grade-schoolers rose to nearly 162,000 students—a growth of 11 percent, even as the nationwide student-homelessness rate increased by only 3 percent.

“As you can imagine, students living doubled-up, as many rural students are, as the hardest to identify,” said Chloe Stein, the principal policy analyst at ICPH. “And these people are spread across such a large area—it’s pretty hard to get an accurate count, which means it’s impossible to know if the funding is appropriate.”

The ICPH report found that homeless students in rural areas were more likely to be staying in hotels or living doubled-up than their urban counterparts, but were far less likely to live in school districts that received federal funding to combat homelessness. Since nearly all homeless students live with their parents, Stein said the statistics suggest an overall rise in rural family homelessness across the country.

“HUD’s definition of homelessness doesn’t really apply in rural areas,” said Camille Dorris, the director of SICHome, the organization that helped Phelps and her daughters an affordable apartment in Marion. “We do work with a lot of people who are on the margins of homelessness, or aren’t considered homeless in the traditional sense, and we still do everything to get them permanent housing.”

In the 20 counties covered by the coalition, for example, there are currently only four open homeless shelters, but unless a person is sleeping on the street or in one of those shelters, they don’t qualify for HUD programs such as “rapid rehousing,” which offers families short-term financial aid to pay for permanent housing.

“Often there just isn’t a shelter, or a place for someone to go, but the person finds a way to get by in their area,” said Nichele Carver, who administers homeless services for the Virginia Department of Housing and Community Development. Part of the state’s homeless outreach, Carver said, involves forming relationships with gas-station attendants or convenience-store cashiers who can serve as informal intake managers for homeless people they encounter.

In general, though, Carver said, “HUD’s system for homeless funding is definitely structured around big urban areas.” HUD divides the country into a few hundred continuums of care (COCs), networks of service providers in a given metropolitan area or region. But in many states, rural areas are all lumped together into a “balance of state” COC, which just means everywhere that isn’t near a city. Service providers in these COCs may be separated from each other by hundreds of miles, which makes it nearly impossible to coordinate referrals, partnerships, and applications for federal funding. Often, said Dorris, there isn’t anyone in a rural county whose job it is to apply for homelessness grants.

The Rich Are Still Getting Richer

While the trigger events that cause homelessness are similar everywhere—foreclosure, unemployment, addiction, illness—small towns have far fewer job opportunities and mental-health resources. And although the housing shortage in rural areas is not as severe as in large cities such as New York City, Seattle, or San Francisco, rural houses are older and more dilapidated on average than urban houses, according to HUD data. As a result, even though the housing crisis left thousands of vacant homes in rural areas, service providers often have trouble finding housing that meets HUD’s standards. This leaves advocates with an uncomfortable choice: Work with the limited resources available in their area, or advise homeless individuals to relocate, which can mean leaving their families and social networks behind.

A few state and local governments in areas with large rural homeless populations have made some progress addressing service gaps: In Colorado, for instance, a new homeless shelter recently opened in Cañon City, a town more than an hour from the nearest metropolitan area. Wide-ranging organizations like the SICHome and the Alabama Rural Coalition for the Homeless have also played a crucial role coordinating between services providers across the state, but their financial situations are often unstable. Dorris says the Coalition lost a huge chunk of its funding during the two-year Illinois budget impasse that started in 2015.

Ultimately, though, Nan Roman, director of the National Alliance to End Homelessness, believes that unless the federal government makes an attempt to tackle rural homelessness as a distinct problem, the issue will only worsen. Roman said NAEH helped Congress sketch out a special HUD program to solve rural homelessness, but that Congress never actually gave the department money to set the initiative up. Under President Barack Obama, the department reversed a years long rise in homelessness, and homeless aid is one of the few parts of the HUD budget that the Trump administration has not slashed. Still, Roman says, without a concerted effort to tackle rural America’s “hidden homeless,” the question of shelter in the United States will only be partially answered.

“If there were more opportunities for people in my situation,” said Phelps, “we wouldn’t have so many people squatting, or shoplifting, or living out of their cars. People’s families do break up, or they get wrapped up with the wrong crowd—that just happens—and there should be organizations to help them.”