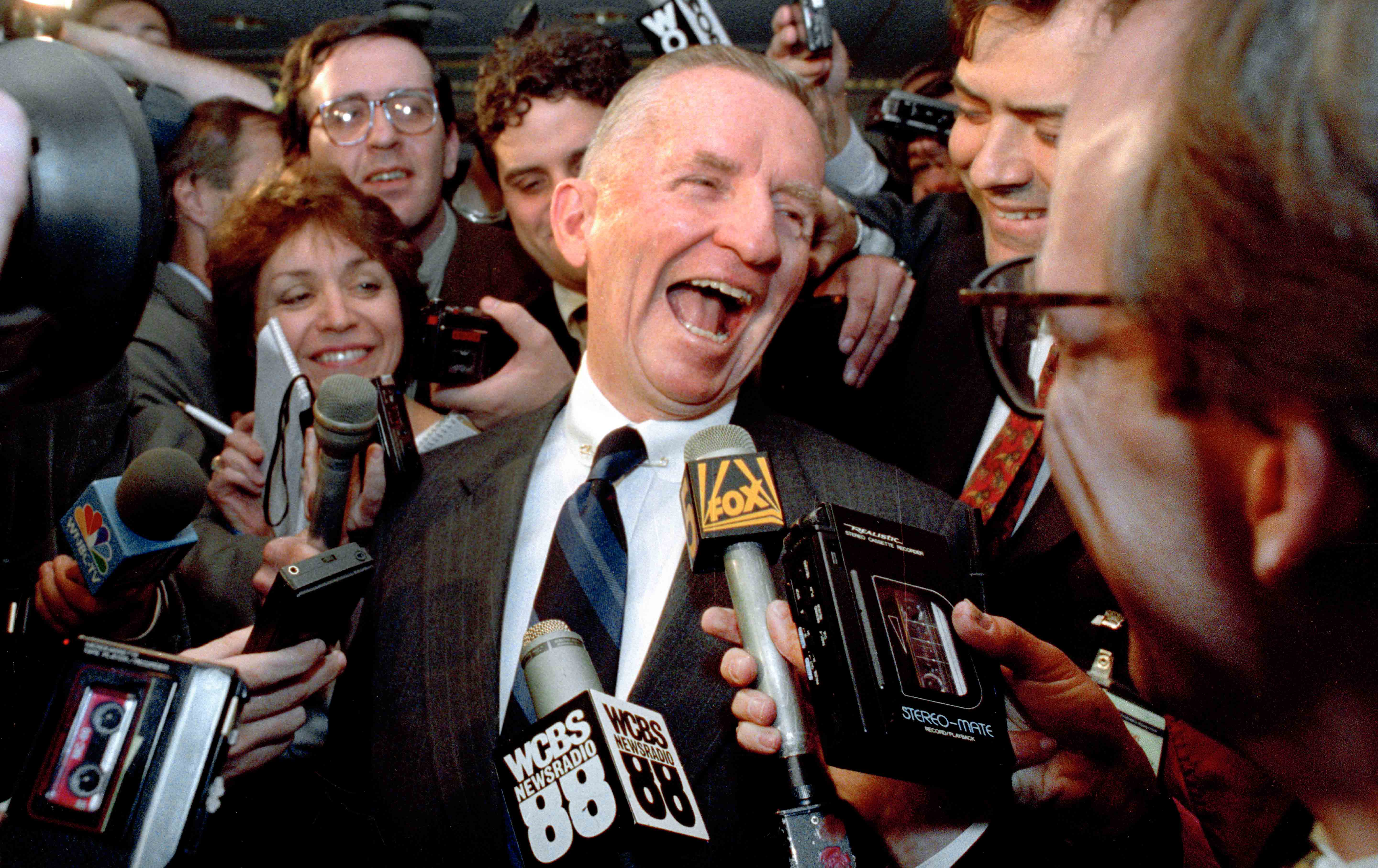 Ross Perot laughing after saying “Watch my lips,” in response to reporters asking when he plans to enter the presidential race in May 1992. (AP Photo / Richard Drew)

Ross Perot, the Texas software tycoon who died earlier this week at the age of 89, was a harbinger of many things in contemporary American politics, almost none of them good.

First, and most important for the history books, for a brief period in the late spring of 1992, after he announced his independent candidacy for the presidency on CNN’s Larry King show, he actually led in the national polls ahead of then-President George H.W. Bush and Arkansas Governor Bill Clinton, their parties’ respective front-runners. With that, along with the 19 million votes he won in the fall, Perot demonstrated well before Donald Trump that a billionaire businessman with the mythic and contrived image of a “man who gets things done” could drive a bulldozer through a seemingly impregnable political establishment. Things were not as solid as they seemed in American politics—something we should have understood much more clearly four years ago.

Second, by creating and controlling United We Stand America, the national organization that was the successor to his 1992 presidential bid, he showed, well before the rise of the Tea Party, that populist movements could be bought on the cheap. Sure, many of the more than a million people who were dues-paying members of UWSA believed fervently in its mission of political reform and economic austerity, but Ross was its boss and the ex-military officers whom he hired to run its state chapters took orders from him alone. Perot’s insistence on top-down control of this mass-based grassroots organization dashed the hopes of a generation of Middle American reformers. But UWSA gave him enormous leverage after his failed run for the White House, and top politicians from both parties sought his approval as they jockeyed to coopt his signature issue, deficit reduction.

In 1996, when Perot converted UWSA into the Reform Party and tried again for the White House, he no longer had a movement with him but a shell that attracted a mix of hucksters and hangers-on, ranging from Pat Buchanan on the right to Lenora Fulani on the left. Only in Minnesota, where local Perotistas kept control of their own organization, did a genuine anti-establishment populist, Jesse Ventura, win power as a result of Perot’s earlier spade work.

Third, Perot’s most lasting political achievement (apart from helping make deficit reduction the holy grail of both parties for a period) was not, as many observers still claim, the election of Clinton. Exit polls show that he drew equally from both parties. Instead, he deserves lasting credit for the elevation of Newt Gingrich’s radical right to power in 1994. Going on the Larry King show in October of that year, Perot called on his followers to give the GOP a majority. Polls show that two-thirds of the people voting in 1994 who had supported Perot two years earlier voted for Republicans for Congress.

Fourth, his nonstop advocacy on behalf of Vietnam veterans fostered a distinctly conspiratorial and ahistorical understanding of America’s role in Southeast Asia. Out went any serious grappling with the corruptions of the American Empire; in came a blind commitment to veterans divorced from the forces that sucked them into overseas wars and left them wounded and broken.

Fifth, as the founder of Electronic Data Systems, a company that started out by selling spare time on IBM mainframes, Perot blazed the path that so many other tech bros have followed into the political arena—attacking government while suckling at its teat. As the radical muckraker Robert Fitch showed decades ago in Ramparts magazine, Perot actually was a “welfare billionaire” who got rich off the fat margins he won servicing Medicare and Medicaid contracts.

Perot always insisted that his business interests had nothing to do with his political positions. After his 1992 presidential run, Fitch wrote an article for my Perot Periodical demonstrating that the tiny Texan’s insistence on reducing deficit spending had earned him more than a quarter-billion dollars in profits. That’s because the bond market—where Perot had stashed at least $2 billion of his fortune—soared after President Clinton, seeking to win favor with Perot and his base, drastically cut his “Putting People First” plan for a big economic stimulus package.

Sixth, Perot taught Trump that running third-party wasn’t the path to the White House. In 1999–2000, Trump began an exploratory campaign for the nomination of the Reform Party, offering a hybrid of right- and left-wing ideas (ranging from paying down the national debt and clamping down on immigration to universal health care and imposing a wealth tax on the rich). But he abandoned the effort fairly quickly.

Instead, in 2015–16, Trump showed that he had learned from Perot’s failure a generation earlier. Like Perot, he positioned himself as a successful businessman who was an outsider to politics, but he ran inside the GOP primary while threatening to go independent if he wasn’t treated “with respect.” Who knows? If Perot had tried something similar in 1992, he could have been president. Instead, he was a stepping stone, a political independent who almost pulled off the impossible—and then helped unleash the whirlwind we live in today.