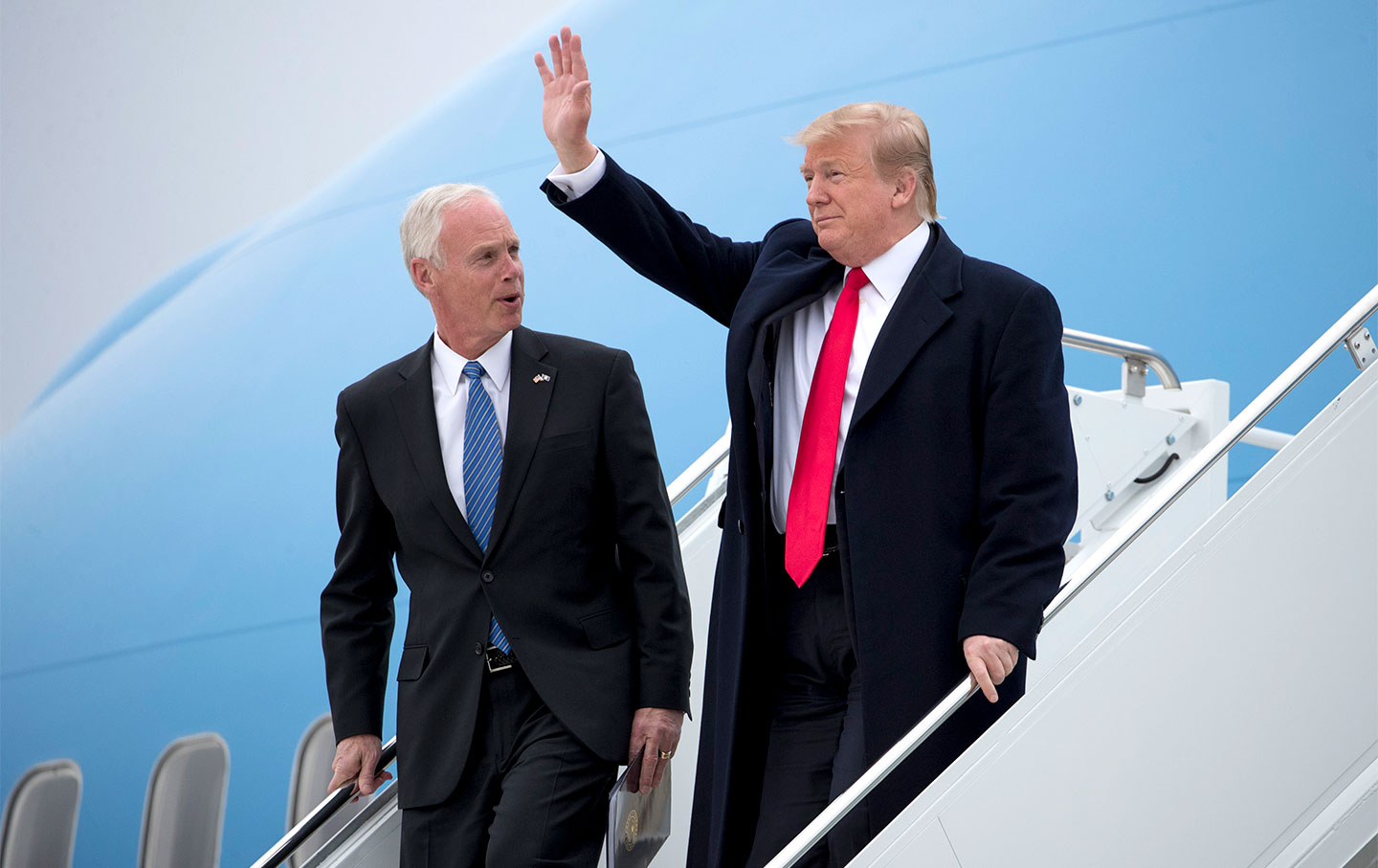 Hours before Lt. Col. Alexander Vindman delivered damning testimony about President Trump’s wrongdoing to the House Intelligence Committee, at the beginning of an extraordinary week of impeachment hearings, the National Security Council staffer was the subject of a crude and dishonest attack by Wisconsin Senator Ron Johnson.

“A significant number of bureaucrats and staff members within the executive branch have never accepted President Trump as legitimate and resent his unorthodox style and his intrusion onto their ‘turf,’” Johnson wrote in a letter to committee Republicans. “They react by leaking to the press and participating in the ongoing effort to sabotage his policies and, if possible, remove him from office. It is entirely possible that Vindman fits this profile.”

Johnson—the chairman of the Senate Homeland Security Committee, a member of the Senate Foreign Relations Committee, and a fierce partisan who recently declared that he does not trust the FBI and the CIA—was not dealing in facts. He was seeking to prop up the desperate Republican effort to defend an embattled president.

Johnson isn’t just another Republican spouting pro-Trump talking points, however. He’s a figure whose involvement in the Ukraine scandal runs so deep that if the House approves articles of impeachment, it is now unimaginable that Senator Johnson could serve as a credible juror in Trump’s trial.

Johnson’s role in the Ukraine scandal and his ill-informed and contradictory statements regarding it have been highlighted in the impeachment inquiry, during which his name has come up on a daily basis in comments from House members and testimony from witnesses. On Thursday, for instance, US diplomat David Holmes described to the committee a September meeting where “Senator Johnson cautioned President Zelensky that President Trump has a negative view of Ukraine and that President Zelensky would have a difficult time overcoming it.” Holmes recalled: “Senator Johnson further explained that he was ‘shocked’ by President Trump’s negative reaction during a meeting in the Oval Office meeting on May 23, when he and the ‘Three Amigos’ (US Ambassador to the European Union Gordon Sondland, Energy Secretary Rick Perry, and diplomat Kurt Volker) proposed that President Trump meet President Zelensky and show support for Ukraine.”

Johnson has been mentioned with such frequency that ranking Republicans on the committee have recognized him as an individual with firsthand knowledge of the president’s handling of Ukraine, while Congressional Progressive Caucus cochair Mark Pocan observes, “He could likely be a witness as well as a juror, which is pretty much impossible.”

Johnson should, of course, recuse himself from that latter responsibility. Yet the senator refuses to do so, despite testimony that has linked him to some of the shadiest aspects of the scandal.

Consider, for instance, last week’s testimony from Ambassador William Taylor, in which the top US diplomat in Ukraine recalled when he first became aware that something was not right.

Upon his return to Kiev in June 2019, Taylor explained:

I found a confusing and unusual arrangement for making U.S. policy toward Ukraine. There appeared to be two channels of U.S. policy-making and implementation, one regular and one highly irregular. As the acting ambassador, I had authority over the regular, formal diplomatic processes, including the bulk of the U.S. effort to support Ukraine against the Russian invasion and to help it defeat corruption.

At the same time, however, Taylor said:

I encountered an irregular, informal channel of U.S. policy-making with respect to Ukraine, unaccountable to Congress, a channel that included then-Special Envoy Kurt Volker, US Ambassador to the European Union Gordon Sondland, Secretary of Energy Rick Perry, White House Chief of Staff Mick Mulvaney, and, as I subsequently learned, [Trump’s personal lawyer Rudy] Giuliani. I was clearly in the regular channel, but I was also in the irregular one to the extent that Ambassadors Volker and Sondland included me in certain conversations. Although this irregular channel was well-connected in Washington, it operated mostly outside of official State Department channels.

Then Ambassador Taylor described the roots of the irregular communications that were unaccountable to Congress.

Since it was revealed that Trump pressured the Ukrainian president to do him a personal political “favor” by authorizing an investigation that was calculated to embarrass a top challenger to the president’s reelection, Perry has been forced to announce plans to resign; Volker has announced his resignation; and Volker has testified during the impeachment inquiry. And on Wednesday, Sondland made his appearance. These are all figures in a scandal that has the potential to derail a presidency.

What of Ron Johnson?

He is such an important figure that The Washington Post recently marveled at how “Sen. Johnson, ally of Trump and Ukraine, surfaces in crucial episodes in the saga.” The New York Times headline on an article about Johnson reads: “‘He’s in Deeper Water Than Most’: G.O.P. Senator at Center of Impeachment Inquiry.”

But Johnson is something else. He is that potential juror. This means that this senator could end up judging the conduct of a president with whom he participated in an “irregular” pattern of communications through which Trump and his henchmen sought to warp US policy for political purposes.

Ambassador Sondland testified on Wednesday: “I shared concerns of the potential quid pro quo regarding the security aid with Senator Ron Johnson.” And even as he has attempted to defend the president, Johnson has acknowledged that he was aware of complaints that Trump was withholding aid to Ukraine for political purposes—and that he discussed those complaints with the president. Yet Johnson chose to keep these conversations secret until after a whistle-blower came forward. The Milwaukee Journal Sentinel reported in October:

Four ethics experts say Johnson—a member of a branch of government that exists, in part, to provide a check on the president—should have…alerted other senators, explored holding an oversight hearing or even told federal investigators. 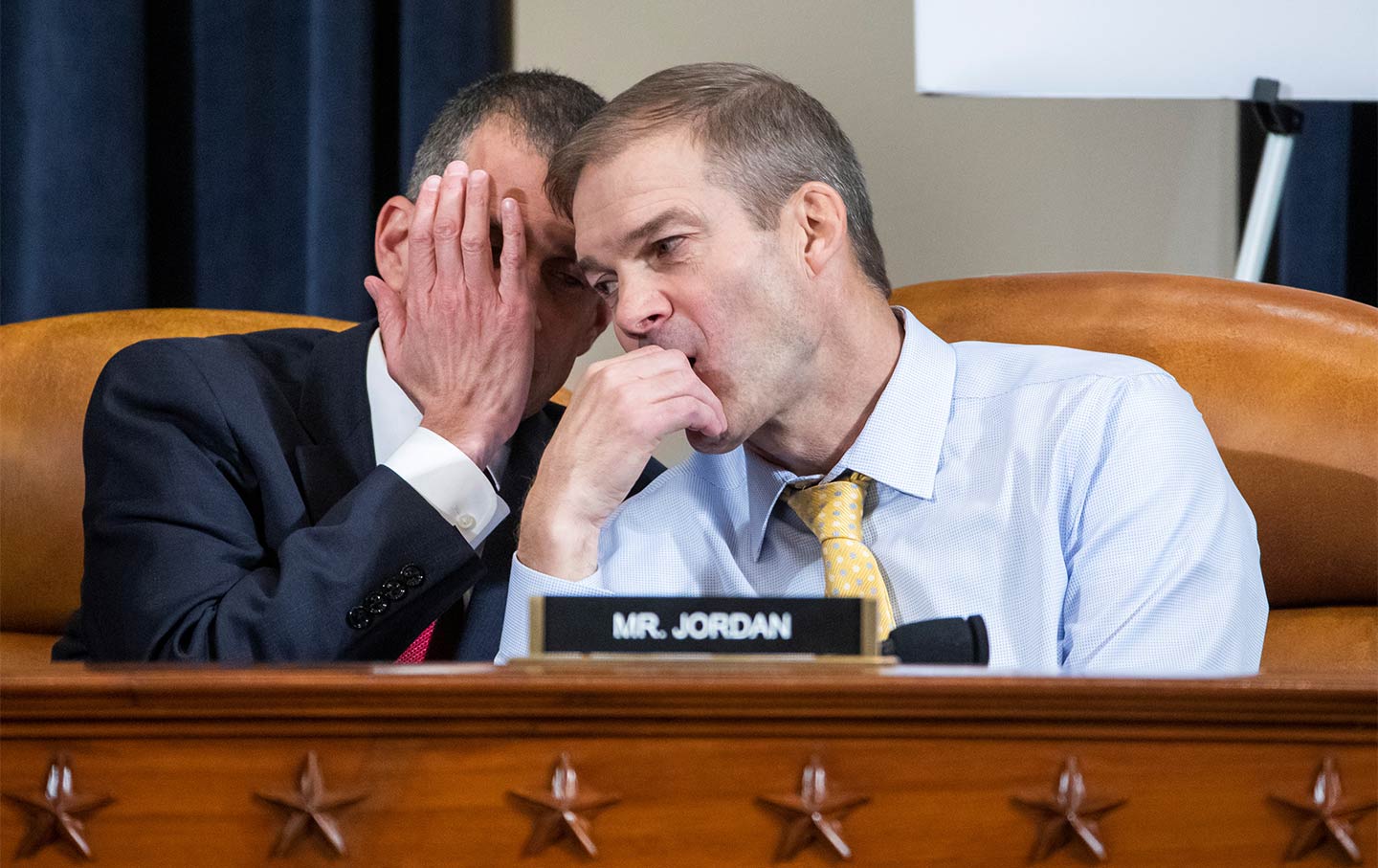 Impeachment Hearing Republicans Confirm There Is No Defense for Donald Trump

Johnson did none of those things. Even now, he remains a partisan defender of Trump—despite the fact that the whistle-blower report, notes on the president’s conversation with Zelensky, and testimony from diplomats who were part of the “irregular channel”—despite Sondland’s disregard for the term—all suggest that the president lied when the senator called to discuss why aid to Ukraine was being withheld. According to the senator’s recollection of their August 31 phone conversation, the president denied everything. “He said—expletive deleted—‘No way. I would never do that. Who told you that?’”

Other key figures in the inquiry have recognized and discussed Trump’s true intentions. Johnson keeps trying to defend Trump—and in such a transparent attempt to please the president that during an interview on NBC’s Meet the Press last month, host Chuck Todd interrupted the Wisconsinite to say, “Senator Johnson, please! Can we please answer the question that I asked you, instead of trying to make Donald Trump feel better here that you’re not criticizing him?”

Johnson is so wrapped up in the Ukraine imbroglio that the letter he sent to House Republicans Monday could end up as part of the impeachment inquiry’s official record.

Pocan is right to observe that “Ron Johnson is inserting himself into the evidence of this case, which in any court of law would make it impossible for him to be a juror. The more he puts his hand into this rabbit hole, the more difficult it is for him to serve as an effective juror.”