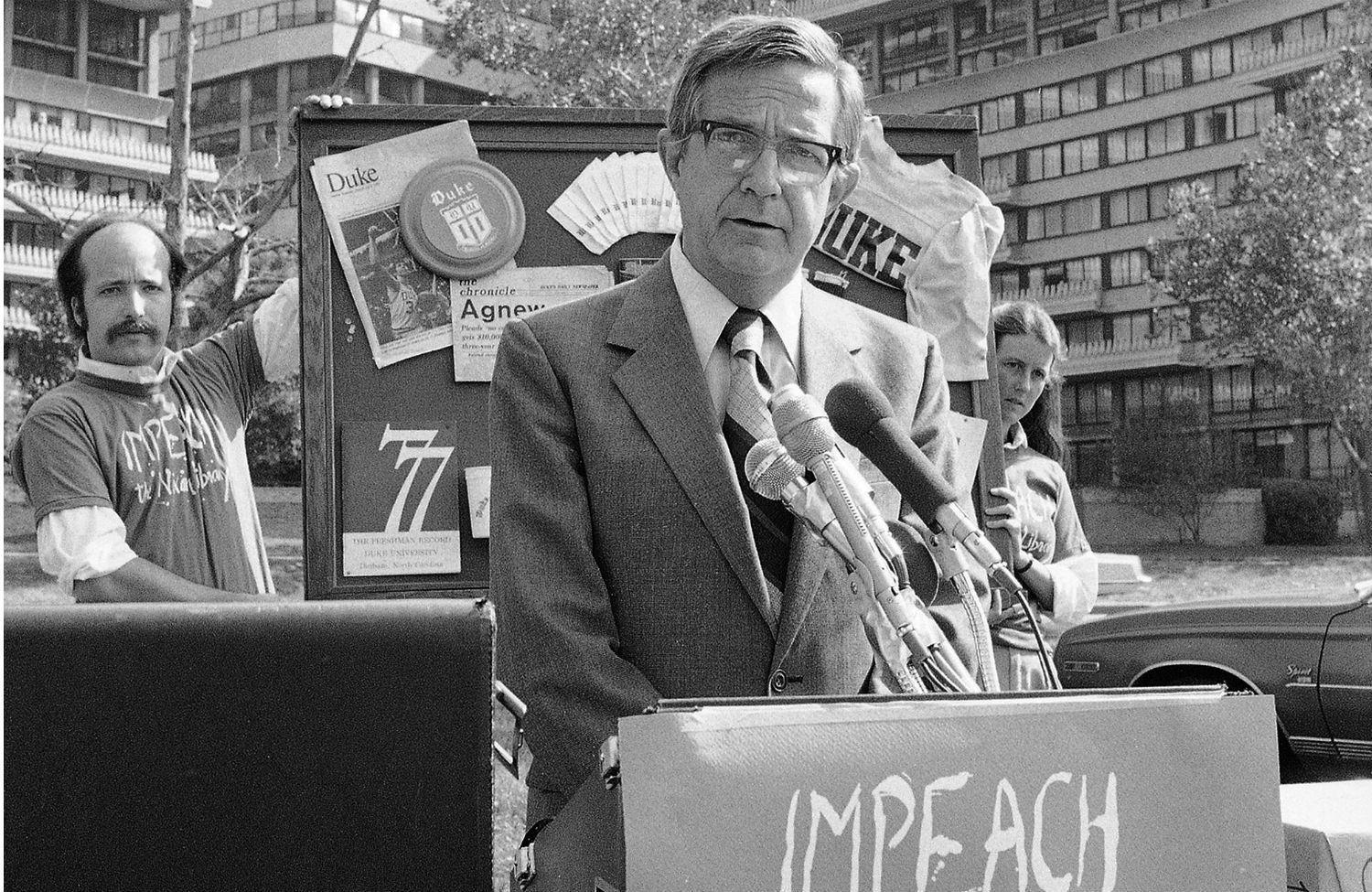 With his usual directness, Professor Lawrence Goodwyn told his doctor to tell the truth. How long did he have? Weeks, months, the doctor said. My old friend and Nell Goodwyn, his wife, shared the news. A great historian was dying, I realized, the teacher who has been my lodestar for more than a generation. I told Larry I needed to say some things, in case we didn’t get another chance. Glad that I did. He died a month later on September 29. A memorial celebration will be held on November 9 on the Duke University campus where he taught for thirty-one years.

I was swimming in warm memories and I reminded him of some of our best moments. I didn’t go to Duke myself. I met Larry through his classic history of the agrarian revolt, Democratic Promise: The Populist Moment in America, published in 1977. I was then a young reporter at  The Washington Post and it was a liberating encounter for me. His book reordered American political history as it is conventionally taught, actually turned it upside down. What I learned from Larry and his books is reflected in every book I wrote myself.

The Professor, as I liked to call him, gave me an empowering way of thinking about our country—both critical and loving, both sternly unsentimental on the facts but sustained by what I call Goodwyn’s radical optimism. He believed democracy is possible, not more than that, and only if people learn how to organize themselves and demand it from the powerful forces that dominate their lives. Larry liked to say this idea of democracy is “unsanctioned” by the established authorities who run things. That sounded like solid ground to me, given the deformed and decayed condition of the American governing system.

We began a long-running conversation that stretched over thirty years in which we frequently exchanged ideas and understandings and he sometimes gently upbraided wooly digressions (sometimes not so gently). He gave me the language and the nerve to write seriously about the idea of democracy, to reject the dominant culture’s cynicism and self-congratulations, to tune out the mass-market propaganda that passes for political speech. What a wonderful gift.

Goodwyn pushed students to recognize that by his measure Americans have never realized authentic democracy, not even close. Yet their unfulfilled thirst for voice and power endures despite the hostile circumstances. Democracy is hard to do, always has been. Genuine social movements are rare, he taught, and frequently fail. But if people persist over years, even generations, their activated consciousness can become the core force driving progress and justice, not the machinations of political parties or powerful leaders.

I think Goodwyn’s singular accomplishment was to rescue this idea of democracy from the indifference of worn-out elites. At least he convinced me. I happen to know he convinced a lot of the young people who had taken his course on social movements. Some of them are organizers now, having learned what Goodwyn himself experienced in his younger years. Before he was a historian, he was a reporter and editor. He learned about democracy and power as a civil rights organizer in the South and campaigning for liberal candidates in Texas.

Larry’s teaching style was insistent and uncompromising but also generous. I experienced it personally a couple of times and was taken aback by his intensity, also his artful method. I sent him the unedited text of my 1992 book Who Will Tell the People: The Betrayal of American Democracy, hoping for his endorsement. Instead, the Professor showed up at my door. He plopped the manuscript on my desk, picked up Chapter One and demanded to know, “What is this chapter about?”

I thought it was obvious. But fumbled around for an answer and didn’t come up with a good one. I mumbled something vague. “Show me where in this chapter you say that.” I thumbed through the pages, searching for a sentence that might get me off the hook. Couldn’t find one. Larry scribbled a one-sentence critique on a “post it” and pasted it at the top of my computer screen. “The facts do not speak for themselves.”

Then he picked up Chapter Two and went at me again. “What is this chapter about?” I scanned the pages, he repeated his mantra: “The facts do not speak for themselves.” That got us to the real question. “What do you want this book to say? Why don’t you just say it?” We went through the drill for every chapter. After two days, we were both exhausted but I had a stack of fresh notes and a clear understanding of what the book needed.

On another occasion, I went to Duke to deliver a lecture and Larry lined up drop-by discussions for me at numerous departments. The most important was his own course on the history of social movements. When I arrived at the classroom, however, the discontent was palpable. The Professor announced that students must put aside their scheduled reading assignment and listen instead to his pal Greider.

The students exploded in rage and rebellion. One after another, they rose to rebuke Goodwyn, for imposing his friend on the class without ever consulting them. They agreed the class would discuss instead the imperious professor who teaches “democracy” but damn sure does not practice it. The teaching assistant, Dirk Philipsen, tried to mediate but sided with the students. I was aghast and embarrassed. I never did get to talk.

Goodwyn, meanwhile, seemed oddly pleased with himself. He didn’t yield, didn’t apologize. Afterwards, he explained himself. Goodwyn believed the principal asset for ordinary people trying to gain voice and influence in politics is their common experience—the knowledge they acquire from everyday life or inherit from family and values, even folk wisdom. Elites may acquire their knowledge from books and learned professors but most folks get theirs from life itself.

While the Professor taught the concrete history of social movements, theory and principles, he wanted his students to experience the anger and frustration of being ignored and abused by implacable power, someone who refuses to respond to just demands. Larry evidently played the role of autocratic leader convincingly. Usually, he told me, it took five or six weeks of his irascible arrogance to provoke an uprising by the students, sometimes sooner if he was especially arrogant.

It’s always about power—who has it, who doesn’t—and power is almost never yielded without a fight. Larry knew this from experience. But that was not the radical element of his democratic faith. I once asked him. When you talk about democracy, what do you mean? “This is an unsanctioned idea,” he said, “but this is the democratic idea. That the people will participate in the process by which their lives are organized.”

Ask yourself: do they? Most Americans are now used to saying, no, not really. They are either ignored or marginalized or easily manipulated by powerful interests. But Larry insisted that is not the end of the story. He never promised happy endings, but his radical optimism did assert that ordinary people are capable of changing outcomes and far more ready and willing than elites will acknowledge. The system reduces people to infantile status, then dismisses them as babies.

The Goodwyn club for democratic promise is clearly a minority faction for now. Pessimism and resignation are in the saddle. But Larry has always said that faith in the democratic idea requires the long view of history. Even in adversity, it is an accomplishment to keep the idea alive for the next generation. Larry did that surely. For a vivid sample of Goodwyn’s thinking, check out “Democratic Money,” a forum we staged in St. Louis in 1989 to illuminate the anti-democratic nature of the Federal Reserve.

Larry likewise gave us a documented basis for sustaining our radical optimism.His other seminal book—Breaking the Barrier: The Rise of Solidarity in Poland (1991)—tells the extraordinary tale of how Polish shipyard workers kept alive their struggle to create an independent trade union for two generations. After the Communists crushed them in the 1950s, these insurgents went underground for years until the moment in 1980 when they resurfaced and their great strike foreshadowed the demise of Soviet domination.

My last conversation with Larry, strange as it sounds, was exuberant. It was two weeks before he died. I was explaining how the handful of progressive Senate Democrats managed to roll the president on his desire to appoint Larry Summers as Federal Reserve chair. This is a potential opening for more progressive upheavals ahead, I told the Professor, him, maybe even a change in direction at the Fed. Because the president will have the opportunity to name four or five new Fed governors in the months ahead and—if he has the nerve—Barack Obama could an change central bank, maybe even mount a joint campaign to revive the economy.

Larry grilled me for more political details and picked up on my enthusiasm. I ran down the names of governors and described their policy inclinations and party affiliations. He asked how to spell one of the names which I did. What’s his first name? For the moment, I couldn’t remember. Later on, he asked again. It dawned on me. Larry must be taking notes, rigorous to the end. How greatly we will miss him.