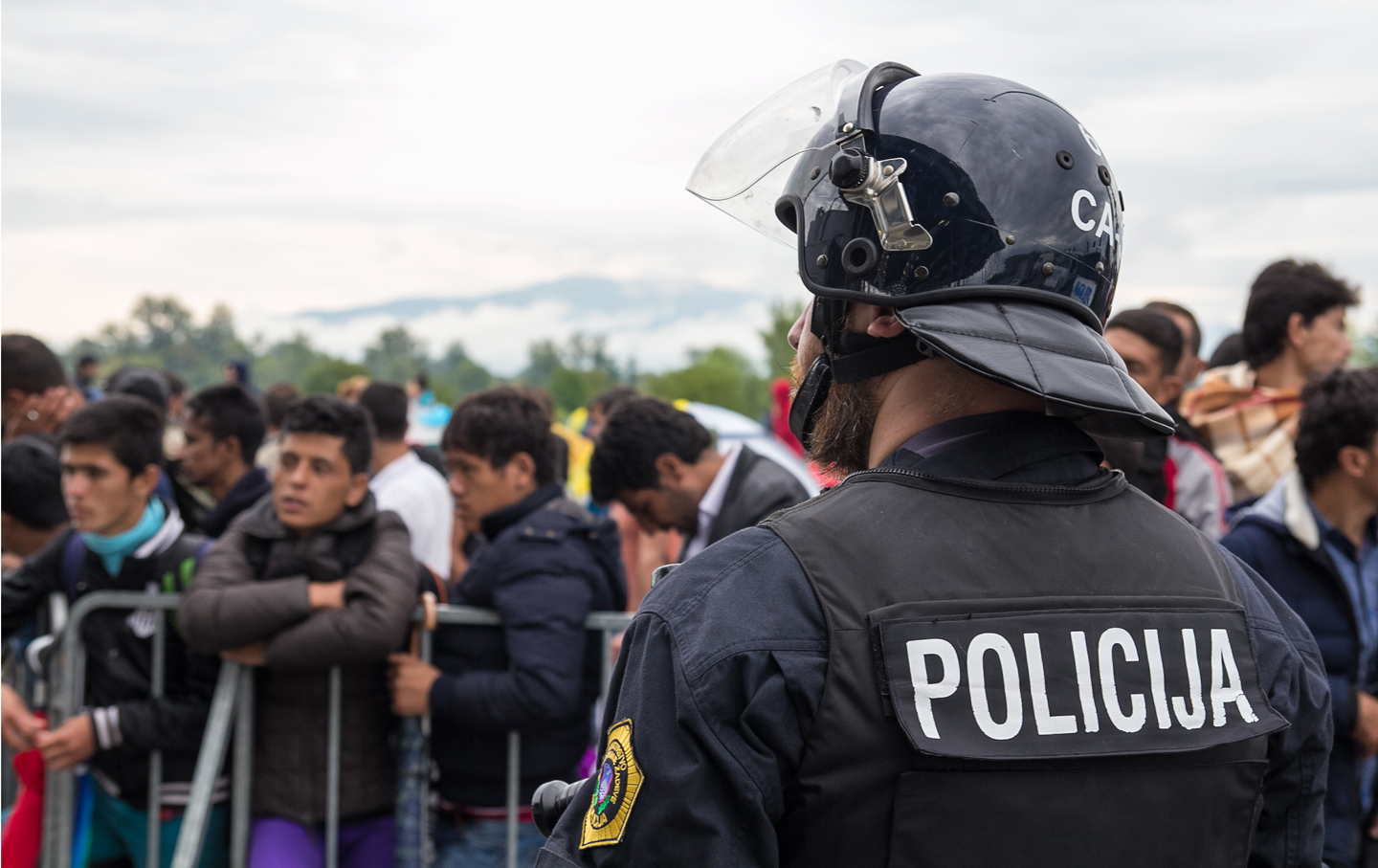 Policeman in front of group of immigrants and refugees from Middle East and North Africa at Bregana, state border between Slovenia and Croatia. (paul prescott / Shutterstock.com)

In January 2012, a 29-year-old Iranian refugee, Muhammed Rahsapar, committed suicide at a refugee center in Würzburg, a town in central Germany. His death sparked an outcry at the conditions in which refugees were housed. Rallies culminated in a 600-kilometer march from Würzburg to Berlin, where the refugees and their allies set up camp as a public protest in Oranienplatz, a square in the Kreuzberg neighborhood. Adam Bahar spent many nights there in a tent.

Bahar had just entered Germany four months before the march, having fled political persecution in Darfur, Sudan. “When I arrived, no one welcomed me,” Bahar, now 32, told me by phone from Berlin. The Berlin Refugee Movement, as it’s now called, began working to change that.

Today, Bahar lives in an apartment and all that’s left of the camp is an information stand, but the movement remains active. For the past few weeks, Bahar and others have met trains bringing refugees from across Germany to Berlin, handing out flyers in different languages on the asylum process. Five hundred refugees now arrive in Berlin each day, many of them disoriented. “Is this Berlin?” is the first question they ask Bahar.

The European refugee crisis dominated the Western media this summer. We have been inundated with images–and rightly so–of thousands of desperate people struggling to cross national borders before barbed-wire fences and security protocol snap into place.

People are isolated and living in inhumane conditions. The media should come and see.” -Adam Bahar, refugee organizer

But while the current emergency creates the impression of a mass of victims, refugees who came before are well-organized in some cities. From Berlin to Stockholm to Geneva, they are mobilizing to reach their peers and demand their rights.

When a person requests asylum in a European country, they enter a waiting period as national authorities consider eligibility, based on the UN Refugee Convention or European Union asylum policy. The waiting time varies across countries–in Germany, for example, the average waiting time in 2014 was 7.1 months (it is now likely longer). During this period, people are considered asylum seekers, without the same rights as refugees.

As city authorities in Berlin rush to open emergency shelters to prevent homelessness, Bahar says conditions for asylum seekers have already begun deteriorating. He noted with concern a national law passed in July 2015 by the Bundestag (federal parliament) that “restructured” the asylum process, giving the government increased powers to detain and imprison asylum seekers. The Berlin Refugee Movement is increasingly politicized, and developing demands; it wants to abolish restrictions on freedom of movement for refugees assigned to live in government-run centers and the right to work, among other things.

“People are isolated and living in inhumane conditions,” said Bahar. “The media should come and see how people are actually living.”

A similar movement is building in Geneva, where I live. I met with Omar (whose name was changed to protect his identity) in September 2015. He was a bright-eyed 23 year old from Eritrea wearing a No bullshit T-shirt. Omar left Eritrea to avoid the mandatory military conscription that ensnared other male members of his family. He made the dangerous land crossing through Sudan and then Libya before traveling to Italy by boat. In September 2014, he entered Switzerland and registered as an asylum seeker. Almost immediately he was directed to his new housing arrangement—an underground bunker.

“When I get inside, it looks like the prison in Eritrea,” Omar said, speaking in Arabic to fellow activist Mohammad Jadallah, who was translating. A guard took his ID at the entrance; inside, harsh overhead lights never went off, keeping him awake throughout the night. His metal bunk was connected to three other beds; when someone moved, all the beds shook.

This Is What Greece’s Refugee Crisis Really Looks Like

Omar estimates that he lived like this for six months. Then he was moved from the bunker to a residence on the city outskirts occupied solely by asylum seekers. He now shares a room with three other men above ground—although he lacks privacy, cannot have visitors, and still has to turn in his ID. For Omar, the worst thing is that he has nothing to do in Geneva. During the day, he wanders the streets. “I’m afraid of losing my mind,” he said.

Omar’s experience is common according to Jadallah, 32, who arrived from Khartoum, Sudan, in October 2014 for a conference before registering for asylum. Jadallah says in late 2014, residents of the underground bunkers started organizing. Their first action as Stop Bunkers: to make visible the invisible.

“Even our neighbors didn’t know about the bunkers,” said Jadallah.

The men smuggled out videos from inside; they reveal small, cramped rooms. In one shot, a bug scuttles up a water-stained wall. No natural light is discernible. They also took detailed testimonials from residents, and wrote reports on their findings—poor nutrition, food served past the expiration date, overcrowded bathrooms, bed bugs, eyesight problems, and deteriorating mental health.

On January 23, they submitted a letter outlining their concerns to the Hospice General, the entity managing the bunkers. “In our countries, only the dead are put underground. We are human beings.”

On February 26, the Hospice General replied that it “deeply regrets the reality of having to house asylum seekers in civil defense shelters.” It agreed to improve the quality of the food, prepared by asylum seekers “under supervision of an instructor.” But it also stated, “It is the responsibility of the residents to maintain a clean and orderly environment where they live.”

Throughout 2015, Stop Bunkers has repeatedly marched in the streets, past the elegant facades of international organizations. In April, they spoke at the Geneva parliament. But over the past few months, five more bunkers opened, now housing 354 of the 5,715 refugees in Geneva. Eritrean migrants are also organizing in Sweden. After Germany, Sweden accepts the second-highest number of refugees in Europe and the highest number per capita, registering 81,301 asylum applications in 2014. Sweden’s Prime Minister Stefan Löfvén is the rare EU leader joining Angela Merkel in calling for open asylum policies. But even in Sweden, stark inequities remain.

Eritrean Ephraim Tewelde is one of four activists in Stockholm who founded the Eritrean Initiative on Refugee Rights (EIRR) last year. Tewelde, who is not a refugee, works in the government agency responsible for refugee integration, witnessing first-hand problems with its services.

EIRR is particularly concerned with the lack of trauma support for Eritrean women after their arrival. Human-rights organizations have documented the frequent rape experienced by Eritrean women traveling with smugglers to reach Europe. According to Tewelde, women are now so aware of the likelihood of rape that some receive injectable hormonal contraception in Sudan to avoid becoming pregnant.

EIRR plans to expand nationally and include Syrian issues. For now, it’s a loose network of 15 people, responding to urgent needs at all hours. Tewelde posted recently on Facebook: “I received a call from a desperate crying young mother whose asylum application was rejected. I am worried that she might end up taking wrong decisions. If any one has temporary accommodation for her, please inbox me.”

Across Europe, the refugee movements ultimately want the same things—major reforms to the European Union’s asylum policies, including striking the Dublin Regulation that states that asylum seekers must be processed in their country of arrival. They want safe options to leave their countries and resettle instead of being forced to rely on smugglers. They want the possibility to live with dignity after having to abandon their homes, families, and countries to survive.

Many of the movement members in Geneva prefer to remain anonymous, for fear of jeopardizing their asylum case. But for Jadallah, a journalist from Sudan who has already waited a year for a decision on his asylum application, the danger of not speaking out is greater.

“If you want a dignified life, you do not think about the risk,” said Jadallah. “You live in another kind of risk because you have to struggle to find your humanity. I’m not waiting, I’m living.”