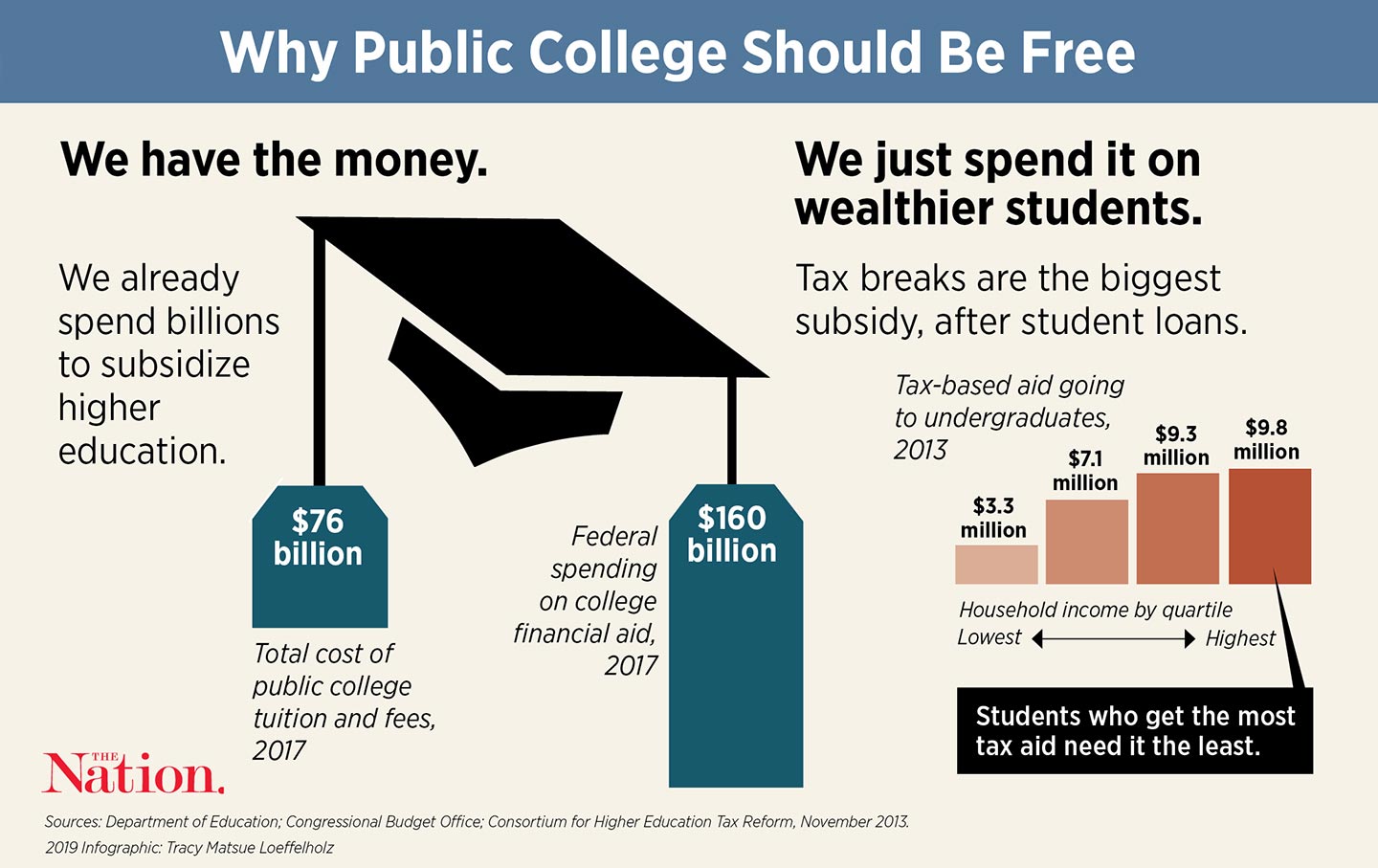 Nearly all of the Democratic presidential candidates have plans to reduce the exorbitant cost of college. But there’s an emerging rift: On one side, candidates like Elizabeth Warren and Bernie Sanders have proposed making public college free for all; on the other, candidates like Pete Buttigieg and Amy Klobuchar want to make it free for only a slice of the population.1

The latter worry that by providing free college to everyone who wants it—including, in Buttigieg’s words, “the children of millionaires and billionaires”—too many resources will be squandered on the rich.2

In reality, we already subsidize college for kids from wealthy families, and those further down the income scale would benefit the most if public institutions were free.3

In 2017, the most recent year for which we have data, all of the tuition and fees charged by public colleges came to $75.8 billion. That’s less than what the federal government spends to subsidize the cost of college. In the same year, the government disbursed about $160 billion in the form of student loans, grants, and tax breaks to help make higher education less of a burden on American families.4

Certainly the students who take advantage of those federal funds use them to go to a variety of higher education institutions, not just public colleges. But it would be more efficient to simply eliminate public college tuition than to spend all that money propping up institutions through a maze of grants and tax breaks.5

How Medicaid Expansion Is Transforming Politics As We Know It

Right now, the government’s money flows largely to well-off students. After student loans, the biggest chunk of student aid is delivered through the tax code; excluding loans, it makes up more than half of all aid. In 2012 the federal government gave $34 billion in tax breaks, a billion more than it spent on Pell Grants for those in financial need. And most of that money is going to the wealthiest families. In 2013, for example, families that made $100,000 or more a year captured more than half of the tuition and fees deduction as well as the exemption for dependent students.6

Instead of pouring money into higher education through the tax code, where the rich soak it up, or subsidizing school through loans and grants, the government could make public college free. As Mike Konczal, my colleague here at “The Score,” argued in June 2016 in the journal Democracy, it would act much like a public option in health care: Private institutions would be forced to compete with free, high-quality public ones and as a result would be incentivized to lower their costs in order to keep attracting students. Predatory for-profit schools would also face stiffer competition to offer an actual education. “A free, but excellent, option would force private colleges to look harder at what they offer and how much they charge for it,” Konczal wrote. Subsidizing student loans and grants, on the other hand, doesn’t give schools an incentive to cut costs. In fact, by covering increases in tuition and fees, it may do the opposite, encouraging colleges and universities to raise their prices.7

So what, then, of the charge that creating a free public option would funnel resources to the children of the richest Americans? This argument doesn’t hold up under scrutiny. Konczal recently crunched the numbers and found that just 1 percent of students at public institutions hail from the wealthiest 1 percent. This means just 1.4 percent of the total spending it would take to make public college free would benefit these students, leaving the vast majority for the rest of us.8

Even if this small group of rich families would benefit from sending their children to a free school—and even if more wealthy families would join them when there is an option without tuition—that doesn’t mean they would come out on top financially. Warren and Sanders propose paying for their plans by increasing taxes on the well-off. Rich families would end up paying more than they would get in return, just as a progressive system is supposed to operate.9

We already offer free education to the children of the rich from kindergarten through 12th grade. A college education should similarly be available to all. Not everyone goes to college or necessarily needs to, as Buttigieg has been pointing out, but that’s the point of having a public option. It would offer a choice: Enter the workforce or get a high-quality education, regardless of financial resources.10