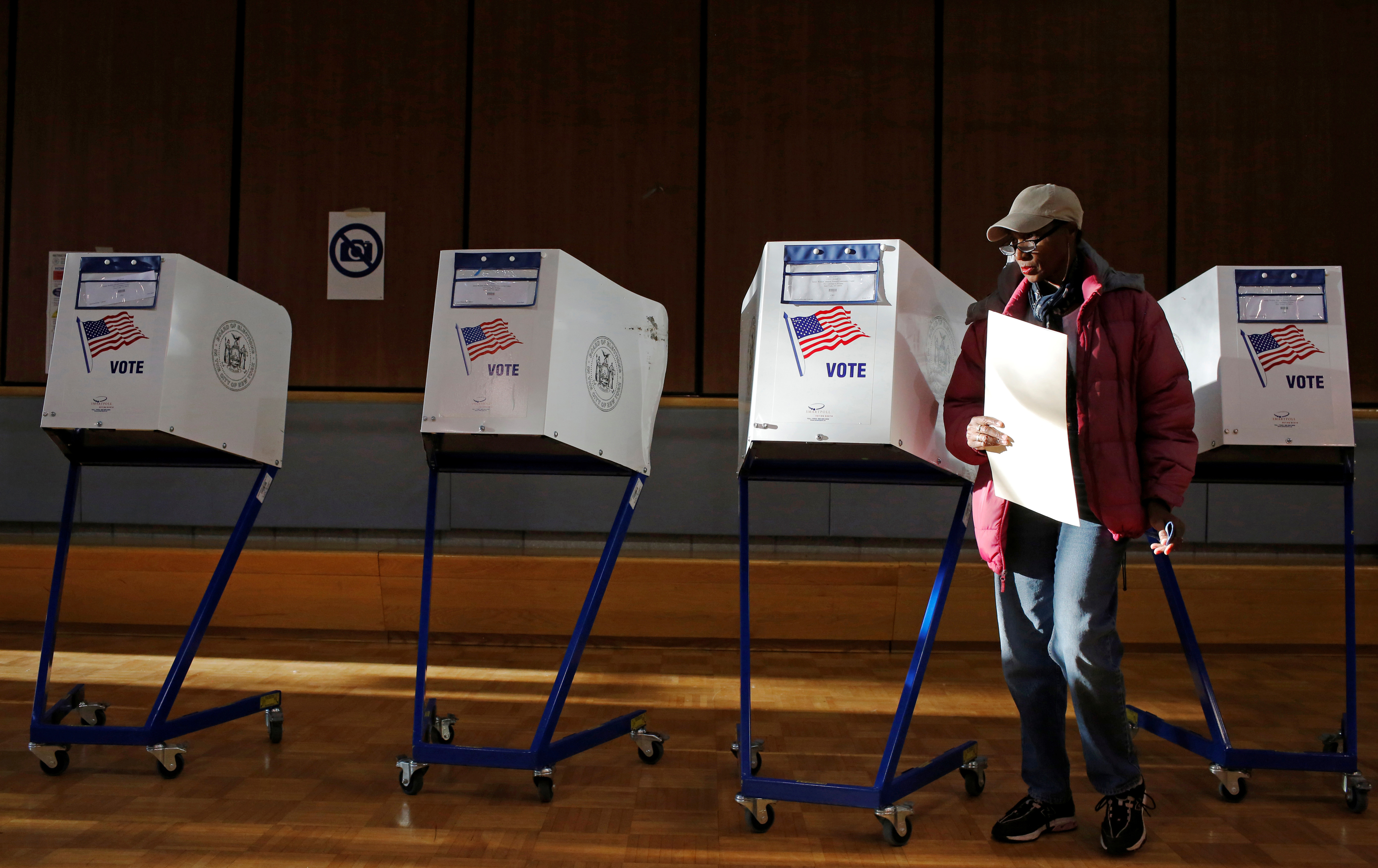 A woman exits the voting booth after filling out her ballot for the US presidential election at the James Weldon Johnson Community Center in East Harlem, on November 8, 2016. (Reuters / Andrew Kelly)

With Donald Trump in the White House and Mitch McConnell running the Senate as an extension of not just Trump’s personal agenda but that of the billionaire class that the president so consistently represents, there are daunting barriers to campaign-finance reform at the federal level. But states can lead right now—and Democratic presidential candidates can signal their support for real reform by backing state-based initiatives to counter the compromising and corrupting influence of big money on our politics.

That’s what Elizabeth Warren did Monday, when she declared that “Public financing of elections is the single best solution to reduce the undue influence of big money in our politics.” Highlighting a critical push this week by the group Fair Elections for New York for establishment of a system of publicly financed elections, Warren tweeted to her 2.32 million followers: “New York could be on the road to #FairElections this week! Hope this passes in the state budget.”

Why would a presidential candidate weigh in so specifically on proposal to reform elections in one state? Because, as the Rev. Jesse Jackson, another backer of the Fair Elections push, argues, the establishment of a system of publicly financed elections “could mark a new era not just in New York, but across the land.”

Jackson is right. New York has a history of leading the nation in favor of political and social reform that goes back more than a century. But today, according to the Brennan Center, New York’s wealthiest donors play an “outsized role” in paying for election campaigns—and an outsized role in shaping the character of a state that has much work to do when it comes to addressing inequality.

A new Brennan study indicates that

* In the 2018 election, just 100 people in the state donated more to state candidates than all 137,000 small donors combined, according to a Brennan Center analysis of 2018 campaign contributions. Small donors are those who gave $175 or less.

“This disparity between mega donors and everyone else in New York probably understates the gap between big donors and everyone else because, as the analysis notes, these numbers do not include the tens of millions of dollars in contributions to candidates from LLCs, PACs, corporations and other non-party groups, much of which also came from the state’s biggest donors and special interests,” explains a savvy analysis by Brennan’s Tim Lau.

Similar complaints can be made about many states, some run by Republicans who oppose campaign-finance reform, some run by Democrats who talk a good game but who do not always follow through. New York, where Democrats now control the governorship and both chambers of the legislature, is in a position to lead. A broad-based coalition of labor, environmental, racial- and social-justice groups, organized as Fair Elections for New York, is making the push for doable and potentially transformative reform proposal.

The Fair Elections coalition notes that “Following the Supreme Court’s Citizens United decision, small-donor matching funds remains the most powerful way to counter the unlimited, secret money flowing into our elections.” With this in mind, the group proposes to “implement a small-donor matching system for state elections, including District Attorneys,” which “gives everyday people the means to run for office and represent their communities while relying on small donations instead of large checks.”

“New York could lead the nation by becoming the first state since Citizens United to pass comprehensive campaign finance reform,” explains the coalition. “By matching small-dollar donations with public funding—$6-to-every $1 raised—we can amplify the voices of women; of people of color; of the working and middle classes; and of any and all under-represented New Yorkers in the political process.”

Time is of the essence, as the deadline for a state budget is April 1.

New York Governor Andrew Cuomo has been advocating for meaningful reform of the state’s campaign-inance system—including the publicly funded matching plan—as have key legislators. The question is whether a clearly defined commitment to these reforms will be included in the 2019–20 state budget.

Earlier this month, Cuomo told WNYC’s Brian Lehrer said that he was “cautiously optimistic” that the plan will be included in the budget. On Tuesday, he restated his support in unequivocal terms, which is encouraging. But there are a lot of moving parts in any budget negotiation, and that is especially true when the negotiation could lead to reforms that step on the toes of wealthy and powerful interest groups.

So this is no time to back off. There needs to be a binding agreement in the budget—not a study or some other half-step, but a genuine commitment to real reform.

Groups like Stand Up America and Citizen Action of New York are pumping up the volume. “Excuses won’t cut it,” argues Citizen Action, which declares that it is time to “give everyday New Yorkers a voice to push back against billionaire donors.”

It is time, also, for a win that provides reformers nationwide with a model they can point to and emulate.

“Winning fair elections in New York would provide a real shot in the arm for nationwide movement,” says Sean Eldridge, a veteran activist who served as political director of Freedom to Marry, the national campaign to win marriage equality, and who is now the president of Stand Up America. “New York has a chance to go from being one of the worst states in the nation on campaign finance to being one of the best. If that happens, it will be recognized across the country.”

Reverend Jackson agrees. “It will be a game changer,” he explained in an appeal for New Yorkers to take the lead. “Politics is often metaphorically compared to a sport, and sports require fair rules. With a small donor matching system, the imbalance between tenants and landlords, between pipeline builders and small-town landholders, between the unwell and big pharma, between schoolchildren and Wall Street backers of school privatization, will be diminished. This is not just a good-government issue. Big money in politics distorts and undermines the democratic process so the rich can get even richer. And it must stop.”