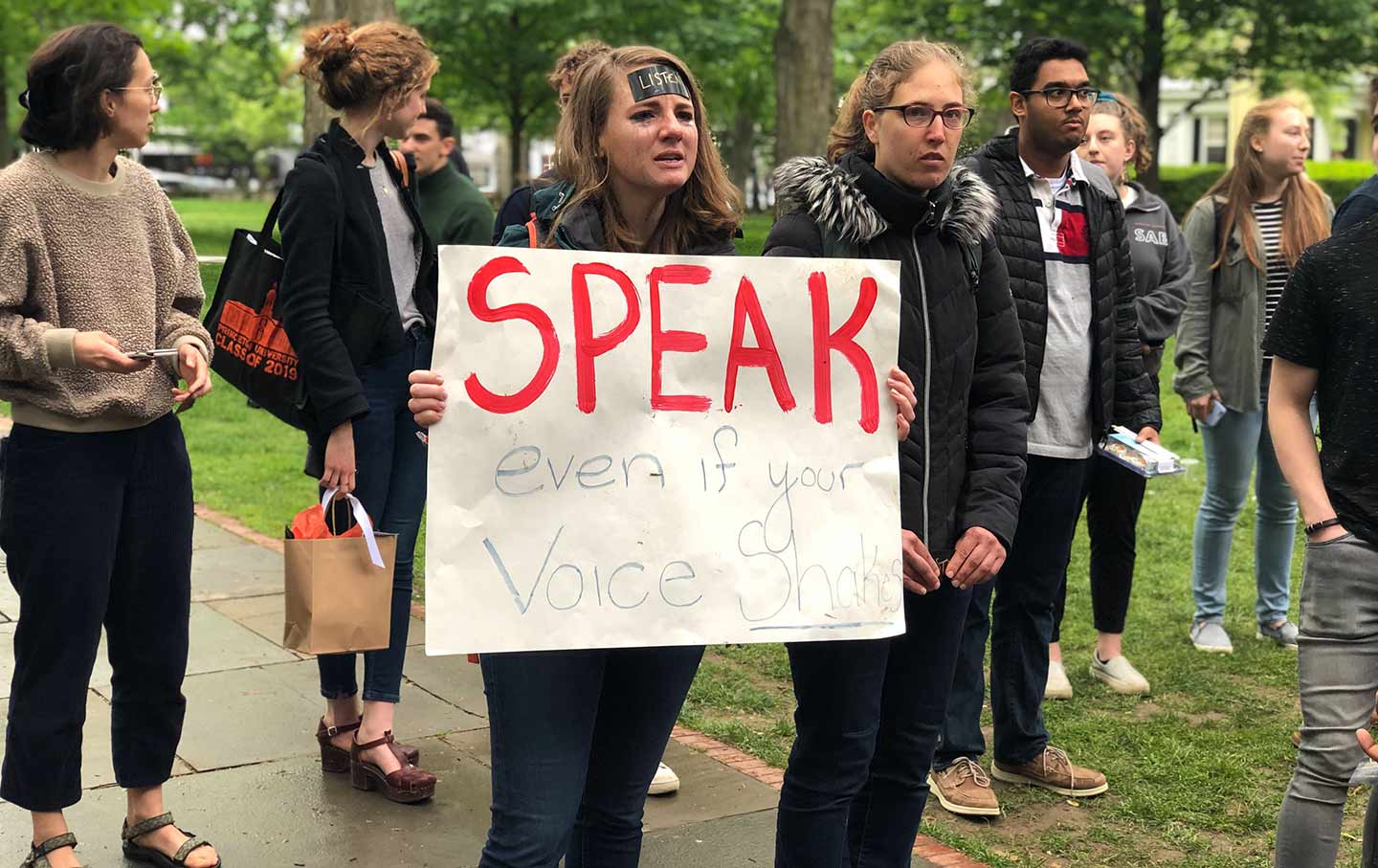 Princeton students protest to demand reforms to the university’s Title IX process for survivors of sexual harassment in front of Nassau Hall on May 8, 2019. (Vignesh Panchanatham)

Since May 7, hundreds of student protestors have staged a sit-in in front of Nassau Hall—the nation’s former capital and now home to the offices of Princeton University’s top administrators—to demand reforms to Princeton’s Title IX process for survivors of sexual harassment and assault.

Now in its seventh day, the sit-in—referred to on social media as “Princeton IX Now”—comes after months-long discussions primarily among survivors and their allies on the shortcomings of Princeton’s Title IX system, which has been described by protesters in their list of demands as “opaque, victim-blaming and traumatizing.” A 2014 investigation conducted by the US Department of Education Office for Civil Rights found that Princeton’s procedures “failed to comply with the requirements of Title IX.” (OCR said at the time that the resolution agreement “addresses the compliance concerns identified in OCR’s investigation and, when fully implemented, will resolve the University’s non-compliance” with Title IX of the Education Amendments of 1972 as it applies to sexual harassment and violence.

A crowdsourced list of demands that has been shared with administrators called for 11 changes to the university’s current system, including increased transparency and consistency in the Title IX process; an “opt-in” alternative restorative-justice track; the hiring of staff to assist survivors in navigating Title IX procedures; and the immediate creation of a department of gender and sexuality studies, among others. (Princeton University is currently the only Ivy League university where gender and sexuality studies is not offered as a major.)

Camille, a junior who filed a Title IX complaint last fall and who asked to be referred to by her first name to avoid media attention, said she remembers feeling “misled” while undergoing the process within the university’s system. “It turned my world upside down,” she said. “I felt I was lied to. Everything I said was completely misconstrued—like my words were turned against me.”

The movement joins a nationwide trend of college students protesting Title IX processes. In late April, students at Swarthmore College staged a sit-in inside a fraternity house and ultimately precipitated the “disbanding” of the only two fraternity chapters at the college. Soon after a sit-in of the college’s administration building concluded in 2018, Liz Braun, the Swarthmore dean of students, resigned. At Virginia Tech, students walked out of class and marched across campus on April 30 to express discontent with their campus’s Title IX office.

Meanwhile, at Princeton, Title IX–related student activism has been growing over the past two months. Starting in early March, posters in campus bathroom stalls sharing support resources for sexual harassment and assault have been covered with red Xs or demands such as believe survivors and believe women. In early April, graffiti appeared on several heavily trafficked walkways on Princeton’s campus, which read title ix protects rapists. Later that month, after the university charged the student responsible for the vandalism upward of $2,500 for repairs, 50 hours of community service, and four years of probation, a student-run GoFundMe campaign raised over $3,500 within 48 hours to cover the fine. “The University is taking damages to its property far more seriously than it took the sexual assault suffered by this survivor and many others,” the GoFundMe page reads.

Upon seeing the graffiti, Jamie O’Leary, a senior who has been working with the university’s Sexual Harassment/Assault Advising, Resources and Education (SHARE) office for the past two years and who created the GoFundMe page, said she immediately suspected that the graffiti came from a silenced survivor. The kind of frustration that led to the graffiti isn’t uncommon at Princeton, she added.

According to O’Leary, though Princeton directs people with Title IX complaints to an independent committee comprised of students and administrators, because the committee’s designated contact to whom students should address complaints is the school’s Title IX coordinator, she and others believe there is “nowhere that they can go that’s going to be external to Title IX to hold Title IX accountable.”

In many ways, the sit-in serves as the culmination of student outcry over the university’s treatment of sexual-harassment and assault cases, which has attracted attention from faculty and alumni as well as the student body at large. Over the past three days, crowds of anywhere between 20 and 120 students have sat on the lawn facing Nassau Hall during the day, with several students taking overnight shifts.

In response to student demands, the university issued a statement on the afternoon of May 8 claiming that it “strives to ensure that every member of our community has access to the resources that they need, and that there is no confusion around our policies, practices and obligations under Title IX.”

“The administration has carefully reviewed the students’ document,” reads the response. In reference to a demand calling for the “immediate dismissal” of Princeton’s Title IX coordinator as well as a review of the chief compliance officer, the university-issued statement states that “unfounded calls for the termination of University employees are inappropriate and will not be considered further.”

“To see the absolute lack of compassion and the lack of acknowledgment that we’ve gotten from the administration, I think, is really disheartening,” said O’Leary. “We all want to make this a community in which people can live safely and happily.”

On the front lawn facing Nassau Hall, students are finding community with fellow protesters and organizers. When administrators failed to show up despite students’ demands for negotiation, students gathered around holding signs and chanting slogans that ranged from response now to we did the work, how about you?

“There is rampant and systemic violence by faculty who operate with virtual impunity on campuses across the country, including at Princeton,” said Anne McClintock, a professor of gender and sexuality studies at Princeton University. She spoke to protesters on Wednesday afternoon in support. “Universities have a brand name to protect. They have strong financial incentives to under-investigate and underreport.”

In an e-mail addressed to members of Princeton’s administration, protesters requested a face-to-face meeting with university president Christopher Eisgruber and vice president for campus life Rochelle Calhoun to be held at 2 pm on Thursday, May 9, in front of Nassau Hall.

“We are willing to extend our efforts if we continue to be met with effective silence from the administration,” it read. No administrators showed up.

On May 10, the Office of Communications released a statement that Eisgruber approved a request to authorize an external review of Princeton University’s Title IX office. Several protesters are scheduled to meet with administrators and members of the faculty-student committees on May 13, when they will have an opportunity to discuss the remainder of the demands.

Over a thousand graduating seniors and Princeton alumni have signed a Change.org petition calling for a boycott of Princeton’s annual-giving initiative, and, in a tweet addressed to student protesters on Wednesday, Imani Perry, a professor of African-American studies at Princeton University, said, “We see you.”

“I’m hoping for radical change,” said Malka Himelhoch, a sophomore who has spent the past year working to change the Title IX process at Princeton. “I think that the system is really broken. I’m hoping that the university will take responsibility for the way that they help perpetuate injustice and the way they use this system to protect themselves rather than the students that they’re supposed to be protecting.”

Correction: This article has been updated to reflect the fact that there is a process by which students can give feedback about the Title IX process. Princeton University’s Faculty-Student Advisory Committee on Sexual Misconduct gathers feedback from the university community through open meetings, written feedback, and surveys. A later section has been clarified to note that the May 13 meeting will convene members of the Faculty-Student Advisory Committee on Sexual Misconduct and the University Student Life Committee and will include an opportunity for the protesters to share their concerns.