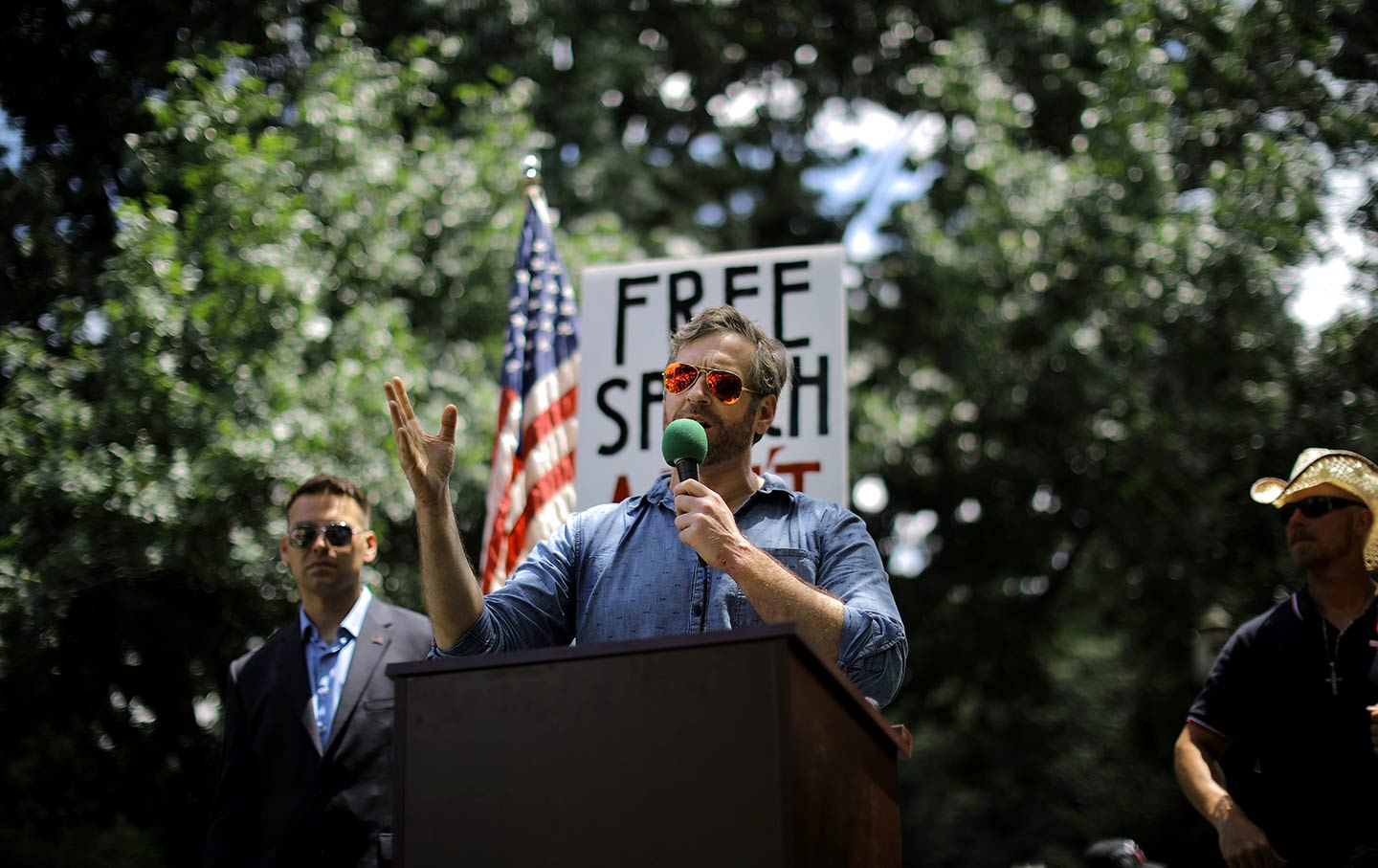 Mike Cernovich at a rally about free speech outside the White House in June 2017. (Reuters / Carlos Barria)

Over the weekend, a group of neo-Nazis and white supremacists marched through Portland. Members of left-wing groups in black clothes showed up to confront them. Hundreds of non-masked counterprotesters came, too, along with 700 police officers.

The police far outnumbered both the Nazis and masked groups. They spent most of the day protecting the white supremacists—ushering them around the city, and even over a bridge closed to pedestrian and car traffic so they could escape the wrath of Portland residents. Portland police tweeted that they were there to “protect everyone’s safety while facilitating everyone’s 1st Amendment right to gather and speak. It is the foundation of our democracy and critical to Portland’s identity.”

Events like this one happen like clockwork these days: A small number of Nazis protest somewhere, usually under the guise of freely expressing their opinions, and the police protect them under a mandate of upholding the First Amendment. By bolstering the narrative that speech should be protected at all costs, the police, perhaps unwittingly, help smuggle white supremacist thought, policy, and action into the American mainstream. Conservatives and many liberals, on their part, lambast “antifa” for not respecting free speech. Trump even tweeted that antifa might be considered a terrorist organization for interrupting the supposed rights of white supremacists to march.

Over the last three years, I’ve been researching and writing a book about free speech in the United States—going to the front lines of free speech battles in Charlottesville and at other far-right protests, on college campuses, and at flashpoints of police repression like Standing Rock. What I’ve found through my research and reporting is that free speech has become a rhetorical tool to elide something much more sinister: the state’s support and protection of white supremacists, and this country’s unwillingness to grapple with its racism and vast inequality.

I’ve been disheartened to see not only conservatives and fascists but also liberals criticizing those who protest against the free speech rights of the most vile groups in America. The New York Times op-ed pages—really, every paper’s op-ed pages—have been filled with ostensible liberals warning that young, leftist, and progressive activists are pushing America toward fascism.

Their argument usually harks back to the oft-misattributed quote: “I disapprove of what you say, but I will defend to the death your right to say it.” Their reasoning makes clear that most of the United States has a deep misunderstanding of what free speech means.

Let’s start with the letter of the law: Nothing in the First Amendment prevents citizens (members of antifa or otherwise) from interrupting someone’s protest. Nor does it guarantee police protection for white nationalists. It only limits the ability of Congress from passing laws that interfere with speech.

Most leftists I talk to do not wish that the government would ban Nazi speech, as governments in Germany and France have. Instead, they wish that police departments would not spend vast amounts of resources protecting Nazis, something that they have no legal mandate to do. When the First Amendment is invoked by the Portland police and other government officials, they’re simply misinterpreting the law, or reinterpreting it to be extremely broad in a way that’s become acceptable largely thanks to decades of work on the part of right-wing think tanks.

The other problem with the state’s defense of Nazis’ right to free speech is that it belies the fact that the state is itself suppressing speech in countless ways every day. We have already decided, for example, that private property rights supersede speech rights: I cannot protest in a Walmart without being kicked out or arrested, and I can even be shot if I decide to protest in someone’s home in a Stand Your Ground state.

State and local governments have decided, and courts have upheld, that requiring permits for protests is an acceptable limit on free speech, and that requiring insurance for any possible damage caused by protests is too—often limiting legal protest to groups that can afford it.

And of course, there are many instances when police actively work against people’s ability to speak, whether it be at the January 20, 2017, protests during which hundreds of people were arrested and charged with felony rioting for being in the vicinity of some broken windows, or at Standing Rock, where police and federal forces broke up a peaceful demonstration at the behest of a private corporation.

How did we get here? Very intentionally, as it turns out: For decades, the right has claimed a monopoly on the idea of “freedom” more broadly—and speech is no exception.

Until 2015, the Koch brothers employed a man named Richard Fink as a political adviser. In 1996 Fink outlined his philosophy of conservative revolution in Philanthropy Monthly: First, you invest in the “intellectual raw materials” of national discourse—professorships, books, student groups. These institutions go on to produce ideas that, in a “middle stage of production,” think tanks disseminate in digestible forms to the public. Then, according to Fink, it’s the work of lobbyists and politicians to enact the final product: policy. In 1978, another conservative policy man named William Simon, who headed the archconservative Olin Foundation, wrote that “ideas are weapons” that do not just naturally bloom: They must be funded through “grants, grants, and more grants, in exchange for books, books, and more books.” In other words, ideas were investments as worthy to the right-wing cause as political influence or corporate power.

These conservative influencers knew they couldn’t simply push for environmental deregulation or tax cuts for the rich, ideas that were at the time odious to much of the public. And some conservative intellectuals insisted that they needed to be disingenuous, to frame their arguments in universally appealing terms like “freedom” or “prosperity,” in order to win over Americans.

The best way to do this was to fund a long-term pipeline of academic research that would make its way into the mainstream. By 2015, the Kochs were subsidizing programs in at least 307 higher education institutions like Brown University’s Political Theory Project and the Mercatus Center at George Mason University. The DeVos family (led by the parents of the current secretary of education, Betsy DeVos) also spent about $200 million on conservative education and research efforts, and helped found the James Madison Center for Free Speech, which was instrumental in defining money as a form of speech through the Citizens United ruling.

Fundamental to all these centers for research was a conflation of freedom for corporations to do whatever they want with political and First Amendment freedom. The billionaires pushed a version of free speech that posited that limiting carbon emissions, taxing the rich, and any form of redistribution were equivalent to infractions on our constitutional rights. To do this, they not only needed to talk about market and economic deregulation; they needed to present their ideas as a radical remedy to the overbearing liberal state. So they funded dozens of books that argued that liberals were essentially limiting far-right speech through political correctness.

Welcome to the era of our supposed free speech crisis.

The late 1980s and early 1990s saw the publication of plenty of “books, books, and more books” that claimed conservative speech was being trampled on by the left. Most popular was Allan Bloom’s 1987 The Closing of the American Mind, which argued that college students no longer wanted to learn about American and European classics. Though the book’s scope was relatively narrow, it was used as a jumping-off point for a media onslaught of anti-PC takes, including a cover story in Newsweek called “Thought Police” and features in New York magazine and The New York Times claiming that college students were out to suppress anyone who didn’t agree with them.

Bloom’s scholarship was funded by the John M. Olin Center for Inquiry into the Theory and Practice of Democracy at the University of Chicago. It was straight out of the Kochs’ raw material-to-public discourse pipeline.

Today, the same manufactured “free speech crisis” can be seen across the United States, with conservative groups funded by the same people claiming their rights have been similar infringed upon on college campuses. The same groups have bankrolled provocateurs like Milo Yiannopoulos, and fund media outlets like Breitbart News whose coverage accentuates these supposed violations. Meanwhile, the mainstream media, along with many liberals, takes the conservatives at their word, not realizing it’s playing a part in a multi-decade campaign to frame conservatives and white supremacists as victims, as opposed to perpetrators of hate.

The billion-dollar investment in what is essentially right-wing propaganda has worked: We no longer think of free speech logically or accurately. Is a college protest over a conservative speaker really a violation of free speech? What about the college students’ right to protest—is that not as important a free speech issue? Colleges are already some of the most restrictive speech environments in the world, deciding who can enter the campus via an admissions process, what gets taught in every classroom, and who gets to teach it.

Is my rejection from UC Berkeley a free speech violation? I might disagree with their decision, but no, it’s not. I don’t expect to be invited to conservative Christian universities, and I don’t view that as a violation of my free speech either. Why should conservatives expect an open invitation wherever they please? And more importantly, why are so many liberals defending them?

Similarly: Are counterprotests and antifa tactics a violation of free speech? We limit protest all the time, and give the state permission to limit the speech of countless people without much of a fuss. I’d argue, for example, that mass incarceration and the disappearing of immigrants is a much bigger threat to free speech than the confrontation of Nazis on the streets.

Even if you do believe that antifa’s tactics amount to a free speech violation, you must then question why those violations retain your attention–and the ire of the political establishment and the mainstream media—while so many other limits on free speech have gotten a pass. Is it because they are the most important free speech battles in the country—or because we’ve been convinced, through decades of ingenious campaigning, to believe they are?