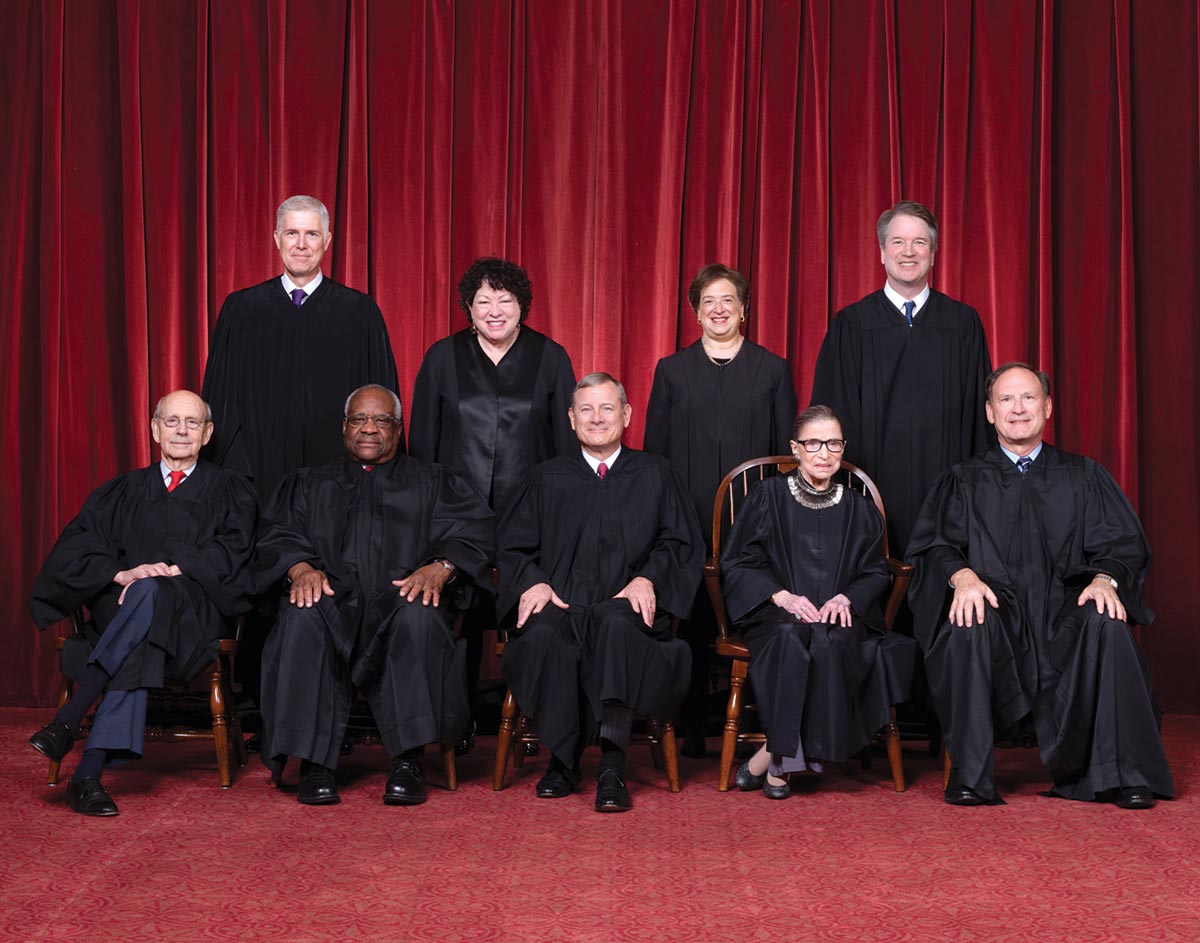 Gang of nine: Today’s Supreme Court justices, all of whom hold lifetime appointments.

Three weeks ago, I wrote that the real threat to the 2020 election is not that Donald Trump will use the coronavirus to try to cancel it but that Republicans will try to steal it, state by state, county by county. In an election in which a record number of people may attempt to vote by absentee ballot, Republican state officials can choose simply to mail ballots to people in counties that traditionally vote for Republicans—and not mail enough ballots to the far more populous counties that traditionally vote for Democrats. In so doing, they can slant the general election toward Donald Trump and other Republicans running for election without Trump having to go through all the bother of declaring himself “dictator for life,” which might spook Mitt Romney.

Last night, the Supreme Court gave Republicans the go-ahead to proceed with that scheme. You don’t need an army to cross the Rubicon when you have henchmen on the Supreme Court willing to do all the dirty work.

The case before the Supreme Court involved today’s federal primary election in Wisconsin. The Democratic governor of the state, Tony Evers, asked the Republican-controlled state Legislature to move back the date of the election, like so many other states have done, amid concerns over Covid-19. The Legislature said no, deliberating for all of 17 seconds on the matter. Evers then asked the Legislature to mail absentee ballots to every voter in Wisconsin. The Republicans said no. Yesterday afternoon, Evers issued an executive order moving the election to June 9. But the Republican-controlled Wisconsin Supreme Court overruled him by nightfall.

While those state-level machinations were happening, the Democratic National Committee sued the Republican National Committee to extend, by a week, the deadline for Wisconsinites to receive absentee ballots. Given the fast-moving crisis, many voters who would normally vote in person had realized late that they would need to vote absentee. The district court for western Wisconsin sided with the DNC, giving voters an extra week to request, receive, and mail back their absentee ballots.

But the RNC challenged that ruling. (Are you sensing a pattern?) Republicans wanted to require all absentee ballots to be postmarked by election day, April 7, and no later; otherwise, they would be thrown out. The US Court of Appeals for the Seventh Circuit shut the Republicans down, but then the Republicans appealed to the Supreme Court, where five Republicans in robes were waiting for them with open arms.

In an unsigned opinion, the five conservative justices backed the Republican Party’s case, while the four liberal ones dissented. It’s Bush v. Gore all over again, with the Supreme Court choosing electoral winners and losers.

Don’t let the absentee ballot postmark fight obscure the larger point: There are voters in Wisconsin who will likely be disenfranchised because they have not received their duly requested absentee ballot by close of business today.

Or, as Ruth Bader Ginsburg wrote in a fierce dissent: “The majority of this court declares that this case presents a ‘narrow, technical question.’ That is wrong. The question here is whether tens of thousands of Wisconsin citizens can vote safely in the midst of a pandemic.”

Wisconsin usually receives around 250,000 requests for absentee ballots. For this election, they’ve received at least 1.1 million requests. The system is overwhelmed. How the hell can a Wisconsin voter postmark their ballot by April 7 if they don’t receive one until April 8? I’m no physicist, but, as I understand it, the properties of creamy Wisconsin cheese do not include the spacetime disruption necessary to achieve time travel.

And because we’re dealing with Republicans, there is evidence that those who haven’t yet received an absentee ballot reside disproportionately in counties likely to vote Democratic. Election Law professor Rick Hasen reports: “As of Friday morning in Wisconsin, for example, only 38% of voters who had requested an absentee ballot in heavily Democratic Milwaukee County had returned one, compared with over 56% of absentee voters in nearby Republican-leaning Waukesha County.”

To reach their desired outcome, the conservatives on the Supreme Court had to ignore, or pretend to ignore, all of the facts on the ground in Wisconsin. They wrote:

…the dissent refers to voters who have not yet received their absentee ballots. But even in an ordinary election, voters who request an absentee ballot at the deadline for requesting ballots (which was this past Friday in this case) will usually receive their ballots on the day before or day of the election, which in this case would be today or tomorrow. The plaintiffs put forward no probative evidence in the District Court that these voters here would be in a substantially different position from late-requesting voters in other Wisconsin elections with respect to the timing of their receipt of absentee ballots.

That is judge speak for: “La la la, if I can’t hear it, it isn’t real.” Instead of addressing the concern that voters may be disenfranchised by not receiving an absentee ballot before the deadline to mail them back, the conservatives simply invented a more pleasing fantasy in which everybody receives their ballots in time, as normal.

In fact, there is no substantive legal reasoning in the conservatives’ opinion that would earn them a passing grade on a law school exam. They refer to their own precedent about how courts should avoid interfering in an election close to that election (a case called Purcell v. Gonzales), but then explain that they’re choosing to ignore that precedent because the district court interfered first. That’s like a bully saying “Stop hitting yourself” as he overpowers you and steals your lunch money.

Elsewhere in the three-and-a-half-page decision, the court says, five times (I counted), that extending the date of the postmark was not something the Democrats initially asked the district court to do. (In fact, Democrats asked to extend the time that the state could receive the absentee ballots, and the district court then added an extension to the time those ballots could be postmarked.) The conservative justices acknowledge that the Democrats’ “failure” to ask for that specific relief does not mean the court can’t grant it. And yet they bring up this nonissue five times, even calling it the “critical point,” despite being forced to admit it’s not critical at all. The only way I can explain this harping on a refrain that the court knows to be ancillary is that the court wants to influence non-lawyers in the media who write headlines.

It’s reasonable to ask why Republicans in Wisconsin and on the Supreme Court are hell-bent on holding an illegitimate election in the middle of a global pandemic, particularly when it would seem that the main issue on the ballot is the Democratic primary race between Joe Biden and Bernie Sanders.

There are two reasons. The first is local: Republican control of the Wisconsin state Supreme Court could crumble should a Democratic-backed judge win today’s election against an incumbent Republican. Protecting that judicial seat allows the Republican-controlled legislature to continue to frustrate the state’s Democratic governor.

The second reason is that this is a test case for the nation. It is starting to dawn on people, some more slowly than others, that the coronavirus pandemic is not going to “wash through” by “Easter,” as the president once said. Various parts of the country are going to be shut down for months. And even after all the quasi-quarantines end, social distancing might be part of our new normal. It is going to be a long, long time before people feel comfortable gathering in large groups again, and before people want to stand in line with hundreds of their fellow citizens to buy a cup a coffee, much less vote.

Where normal people see a vast human tragedy, Republicans see an electoral opportunity. The entire Democratic theory of overthrowing Trump has been to inspire massive voter turnout. Turnout led from the urban centers and their close suburbs. The “blue wave.”

Meet the Next Brett Kavanaugh

But it is in these densely packed communities that Covid-19 is hitting the hardest. And there is already evidence that the African American community, the base of the Democratic party, is being disproportionately killed by the virus.

Republicans can use all of this to their advantage. If people have to choose between risking their lives by going to vote, or staying home, most people will stay home—and who can really blame them? If Republicans can make it hard for people to vote absentee, particularly in high-population centers where there is going to be the most demand for absentee voting, Republicans can win.

The Wisconsin ordeal is to the November election as Italy’s outbreak was to our own. It’s where we can see what is coming for all of us, and what will happen to our country, if we don’t act soon enough.