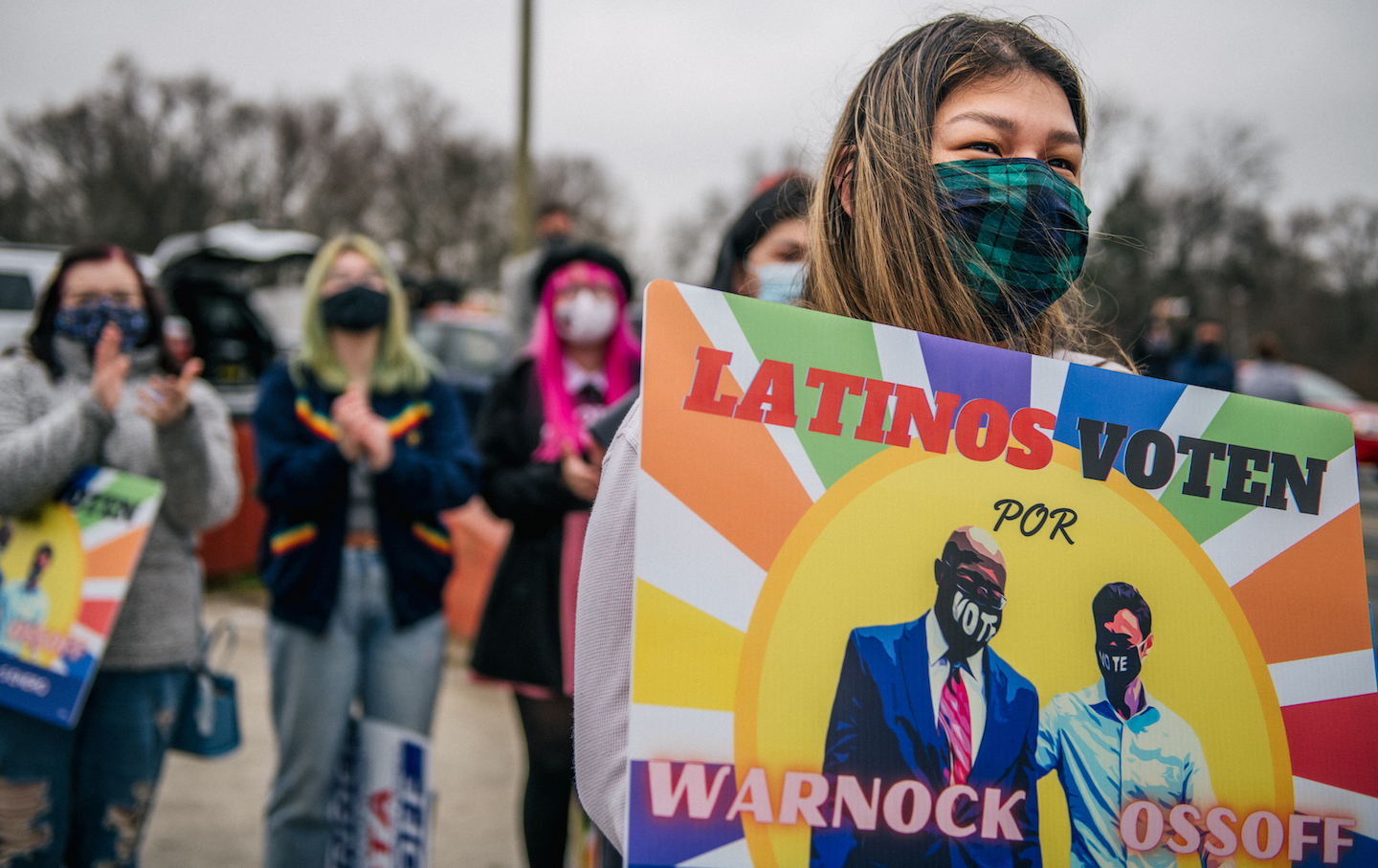 A woman holds a sign during a Latino meet-and-greet and literature distribution rally on December 30, 2020 in Marietta, Ga. (Photo by Brandon Bell / Getty Images)

Tania Unzueta came to the phone Saturday morning while driving from one side of Georgia to the other. She was headed east from Atlanta to Augusta, which sits on the border with South Carolina.

While the city may be best known for the Masters golf tournament, a different kind of contest is taking place there now. Unzueta, together with her crew of 30 canvassers, was in search of several thousand Latino voters, planning to knock on as many doors as possible for the rest of the day.

“We’re going to doors no one has gone to before,” Unzueta said.

It was three days before tomorrow’s runoff elections, which will decide the balance of power in the US Senate. In the last two months, Unzueta had gone from hearing a national political organizer say to her, “I didn’t know there were Latinos in Georgia!” to seeing $2.3 million pour into her organization, Mijente, or “My people.” 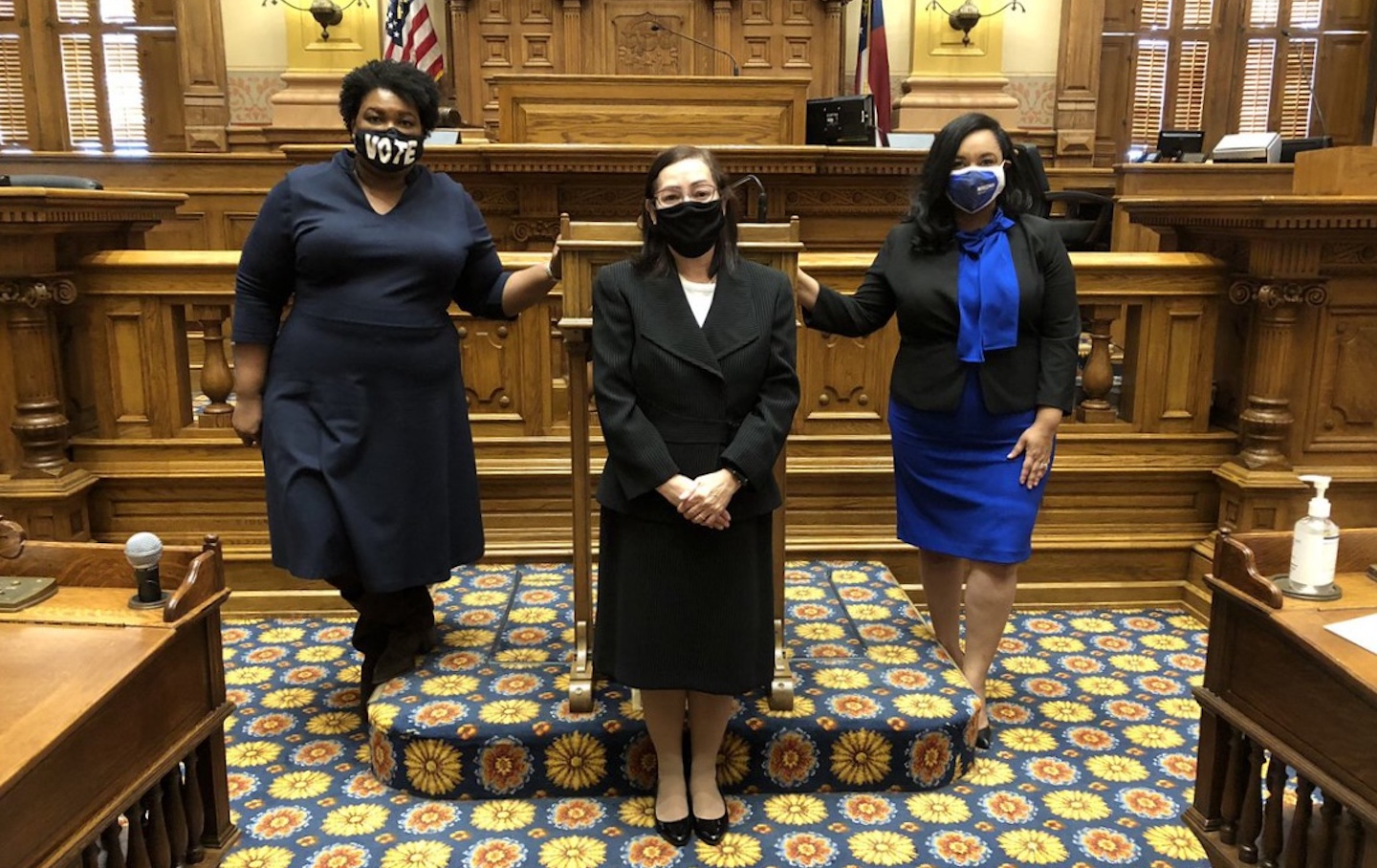 Casting a Historic Vote in Georgia

This has allowed her to assemble a group of around 200 canvassers who have fanned out across the state, seeking Latino voters to convince them to show up at the polls, and to vote for the Democratic candidates, Jon Ossoff and Raphael Warnock. They had knocked on some 280,000 doors during the period of early voting that ended December 31, she said, with masks on and keeping their distance. Now she was making a last-minute push before election day.

A handful of organizations are on the ground in Georgia engaged in everything from nonpartisan, get-out-the-vote efforts, to Mijente’s more partisan approach, to offering Spanish-language interpreting at the polls during early voting, to lobbying counties with large Latino populations to reverse poll closures, to passing out information in Spanish about how to vote. All are a sign of the changing Georgia that turned the state blue on November 3 for the first time since 1992.

Sixty-nine percent of Georgia’s Latino voters supported Democrats in November’s presidential and House races, according to exit polls; 60 percent voted for Ossoff and 39 percent for Warnock (there were 20 candidates). Gwinnett and Cobb counties—two of the five largest counties in Georgia—also became the first in state history to provide voting materials in Spanish during a presidential election. (Nearly 22 percent of Gwinnett’s population of 936,250 is Hispanic; 13.3 percent of Cobb’s population of 760,141 is Hispanic).

The change hasn’t been easy, or smooth. Part of the reason is the way race, and identity, has been thought of in Georgia, and the South. Deborah González, elected November 3 as the first Latina district attorney in state history, told me that when she was thinking of running for a seat in the state legislature in 2017, a former member of Congress discouraged her, telling her that voters wouldn’t relate to her as a candidate. “You’re not white, you’re not Black,” he said. “You’re ‘other.’”

“Georgia has historically only been Black or white,” González said.

In places like Hall County, the change is inevitable. Nearly 1 in 3 of its population of 204,000 is Hispanic, many of whom have come to work in the poultry plants that have led the county seat, Gainesville, to call itself, “Poultry Capital of the World.” Gabriel Velázquez wears two hats that make him quite visible among Latinos in the Gainesville area and around Hall County: His family has run a business for 20 years that was first a butcher and is now Taquería El Mercadito; he has also canvassed voters and worked at the polls for several election cycles, handing out literature and offering to help translate ballots. In late December, his restaurant was the site of an event hosted by Fair Fight, an organization founded by Stacey Abrams, which has helped register hundreds of thousands of Georgia voters in recent years. Several hundred local people showed up for free burritos; some were convinced they had already voted, Velázquez said. They were referring to the November 3 elections. The group’s members informed them about the runoffs.

Despite its large Hispanic population, Hall County officials have not made elections materials available in Spanish. This has resulted in a phenomenon that Velázquez observed in early voting for the Senate runoff and in previous elections: People show up to vote with younger, bilingual family members, or get help before they arrive. Last week, he asked a man he recognized as a customer of his restaurant if the man needed help translating the ballot. “No, my daughter helped me at home,” the man said. Velázquez tries to see this situation in a positive light: “They’ve forced us to turn this into a family event,” he said, referring to county officials. “So in five, 10 years, the kids who help their parents vote are going to go vote themselves.”

Miranda Galindo, senior counsel at Latino Justice, had just finished emailing officials in Liberty County, south of Savannah, on Georgia’s coast, late last week. Nearly 13 percent of the county’s 61,000-plus residents are Hispanic, and Galindo was trying to convince the officials to offer the same Spanish-language ballot that Cobb County was using for the runoffs. “The Latino population is growing, and it seems to be news to some folks here in Georgia,” she said.

Galindo had also joined forces with a host of activist organizations in mid-December to try to get Hall County to reverse its decision to close half of the eight early voting sites made available during the general election. Several of the closed locations were located in areas with high populations of voting-age Hispanics. Public transportation in the north-central Georgia county is scarce. The polls remained closed; Velázquez and other poll-watchers reported wait times above 30 minutes during several days of the early voting period.

Another phenomenon important to reaching the Hispanic voter in Georgia in these nationally-important runoffs is the mixed-status family. Research has shown that nearly 1 in 5 Hispanic households may include someone who is not a citizen. Elton García-Castillo, Field County Coordinator for the Georgia Association of Latino Elected Officials (GALEO), runs into this when he is handing out information on the runoffs. “A lot of folks in the community say, ‘I’ll give this to my son,’” he said—because the parent is undocumented, but the son is registered to vote. The family member who is eligible to vote takes into account issues important to everyone in the household, and winds up “voting not just for themselves, but for the whole family,” said Galindo.

At a late-December event aimed at Latino voters at the Santa Fe Mall in Duluth, a Gwinnett County city of nearly 30,000 that is 15.6 percent Hispanic, Jon Ossoff told the crowd, “Mi madre es inmigrante,” referring to his mother, who came from Australia to the United States alone when she was 23. Warnock was also at the event, and—a sign of the event’s importance to the campaigns—so were television and film actresses America Ferrera and Eva Longoria, and the actor and rapper Common.

Juan Pascual stood off to the side, taking in the pitches of both Democratic candidates. Pascual, who works for a company that helps repair utility infrastructure after hurricanes and other natural disasters, was impressed. “There’s been so many injustices, more all the time,” he said. “I really wanted to vote.” The only problem: the 57-year-old, originally from Mexico, had been a US resident since 1988 and began the process of becoming a citizen four years ago, only to have the swearing-in ceremony postponed several times.

“I feel powerless,” he said, but was resolved to speak to his 27-year-old son. What did he like about the candidates? “The part about health care, and jobs,” he said—other words Ossoff had said in Spanish.