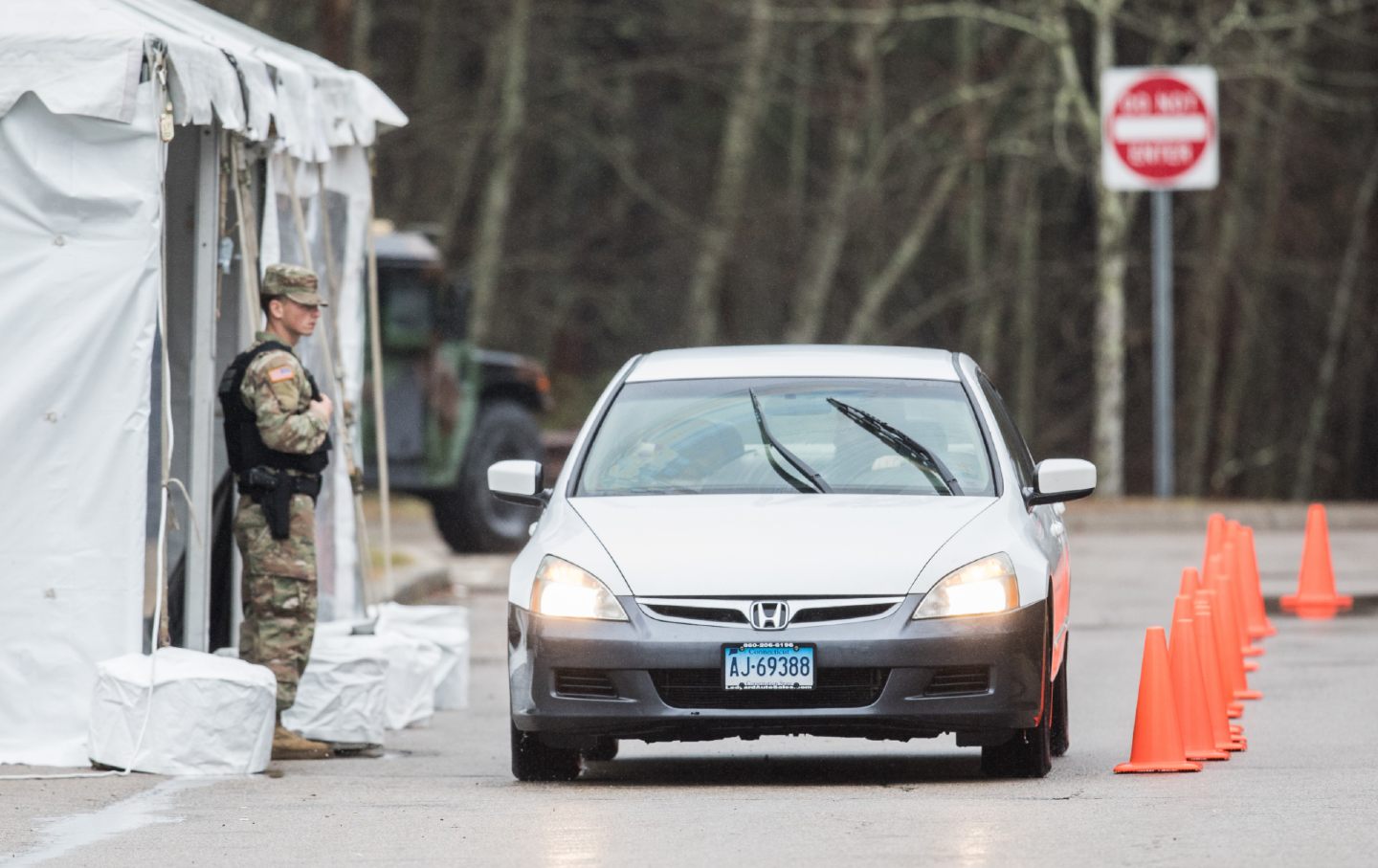 A car passes through a checkpoint after crossing into Rhode Island from Connecticut on the I-95 on March 29, 2020. (Photo: Scott Eisen / Getty Images)

Unfortunately, it seems an increasing number of state government officials can no longer tell the difference.

In Texas, Governor Greg Abbott signed an executive order telling people to self-quarantine if they are returning to Texas from a hot spot like New York or New Orleans. Florida Governor Rick DeSantis is apparently setting up checkpoints on I-95 to prevent New Yorkers from traveling to the state. And, after proposing that state police stop and check everybody traveling into Rhode Island with a New York State license plate, Rhode Island Governor Gina Raimondo has now ordered state police to direct all out-of-state vehicles to a checkpoint where visitors intending to stay in Rhode Island will be asked to hand over their contact information and then quarantine for 14 days.

I’d say these state travel restrictions are like closing the door after the horse has left the barn, but that’s too modest. To really understand how absurd these bans are, you have to imagine that the horse is actually a flying reindeer which can poop coronavirus down everybody’s chimneys in a single night—and then do it a second time for good measure—all by the time the governors wake up in the morning.

Some of these restrictions are likely unconstitutional, should anybody feel like suing. The Privileges and Immunities Clause of the Constitution says that you can’t treat people differently based on what state they live in. Here’s the text: “The citizens of each state shall be entitled to all privileges and immunities of citizens in the several states.” This should mean, at a minimum, that you can’t instruct your state police to harass people based on their license plate. If you were looking for something that was even more unconstitutional than racial profiling—if not quite more immoral—license plate profiling might do the trick.

Intrastate travel restrictions and quarantines can be constitutional, but they must be carefully written in order to avoid a violation of Privileges and Immunities. The Texas law is the best example of a travel ban that can work under the Constitution’s framework. Abbott’s restriction applies to everybody, including Texas residents, who are traveling back from a hot spot. Thus, citizens of Louisiana are being treated just the same as citizens from Texas. That scheme works, constitutionally speaking (for a more detailed examination of why the Texas restriction is constitutional yet illustrative of a greater governmental failure, check out this excellent post from Vox).

But the likely constitutionality of the Texas order highlights the constitutional defects with the plans in Florida and Rhode Island. There, the governors are not treating every citizen the same based on where they’ve been; they’re treating citizens differently based on where they live. Under Raimondo’s plan, for instance, a resident of Rhode Island (as indicated by their license plate) can drive to New York, lick a couple of subway poles, then drive back to Rhode Island without being stopped, harassed, and told to self-quarantine by state police. But a New York resident cannot visit Rhode Island without quarantine. In fact, a New York resident traveling to Boston cannot drive through Rhode Island (which is kind of in the way), without potentially being pulled over by the state police. But a Rhode Island resident could ferry an SUV full of coughing New Yorkers through Rhode Island, without worrying about police intervention. Apparently, the governor thinks an Ocean State license plate is a coronavirus vaccine.

That’s not how the Constitution is supposed to work. The whole point of that document is to make us citizens of the same country, as opposed to a loosely affiliated “confederation of states.” Once you get the state police involved—armed men and women who can make you follow their rules at the point of a gun—then the Privileges and Immunities Clause must kick in to prevent states from trying to erect a moat between themselves and the rest of the union.

None of that should be taken as an encouragement to go road tripping around the country right now. People should be sheltering in place. Travel should be limited to essential workers performing essential functions. I like lobsters, too, but not so much as to risk my health and the health of everybody I interact with that I would consider driving to Rhode Island to get one.

For a lot of people, the constitutional problems with state travel restrictions are a marginal concern: If it keeps people safe, why not temporarily ignore the Constitution? Shouldn’t the Rhode Island governor be doing everything she can to keep people in her own state safe? Why not DeSantis?

But those willing to throw out the Constitution in the name of public health need to remember that these travel restrictions are also a distraction from the real problem: the lack of Covid-19 testing. Travel bans create a false sense of security based on the illusion that the virus is only “really bad” in New York and some other known hot spots. In reality, we don’t know the extent of the outbreak in Providence and how it compares with the extent in Queens, because widespread testing is still not available. New York is, finally, at the point where it can conduct a large number of tests in a day (though we still need many, many more). In Rhode Island, even prominent local personalities who may have been exposed to Covid-19 are still having trouble getting tested.

The Coronavirus Is Trump’s Latest Excuse to Militarize the Border

In fairness to the governors, we are in this situation because the federal government has not provided the tests we need to make smart public health decisions about tracking and containing the spread of the virus. At the same time, law school graduates like Raimondo and DeSantis (Yale and Harvard, respectively) should know better. They should know that their travel restrictions not only run right into the Privileges and Immunities Clause, which renders them potentially unconstitutional, but also slam smack into another constitutional provision, which makes them useless.

I’m no infectious disease expert, but I’m pretty sure that truck drivers are not immune to Covid-19. If you are allowing drivers of commercial vehicles to travel into your state, stop, unload cargo, sneeze, and then trundle onto their next pickup or drop off, then you are not stopping the spread of anything. The virus does not care if it is riding in an 18-wheeler instead of a family Hyundai.

As citizens, most of us can agree that we should limit our nonessential travel. We should practice social distancing. We should be working from home. And the government should be testing everybody it can in order to slow the spread of the disease.

Roadside checkpoints based on out-of-state license plates accomplish none of those critical safety precautions. They don’t protect anybody. They just give people the false sense that the virus is somebody else’s problem.