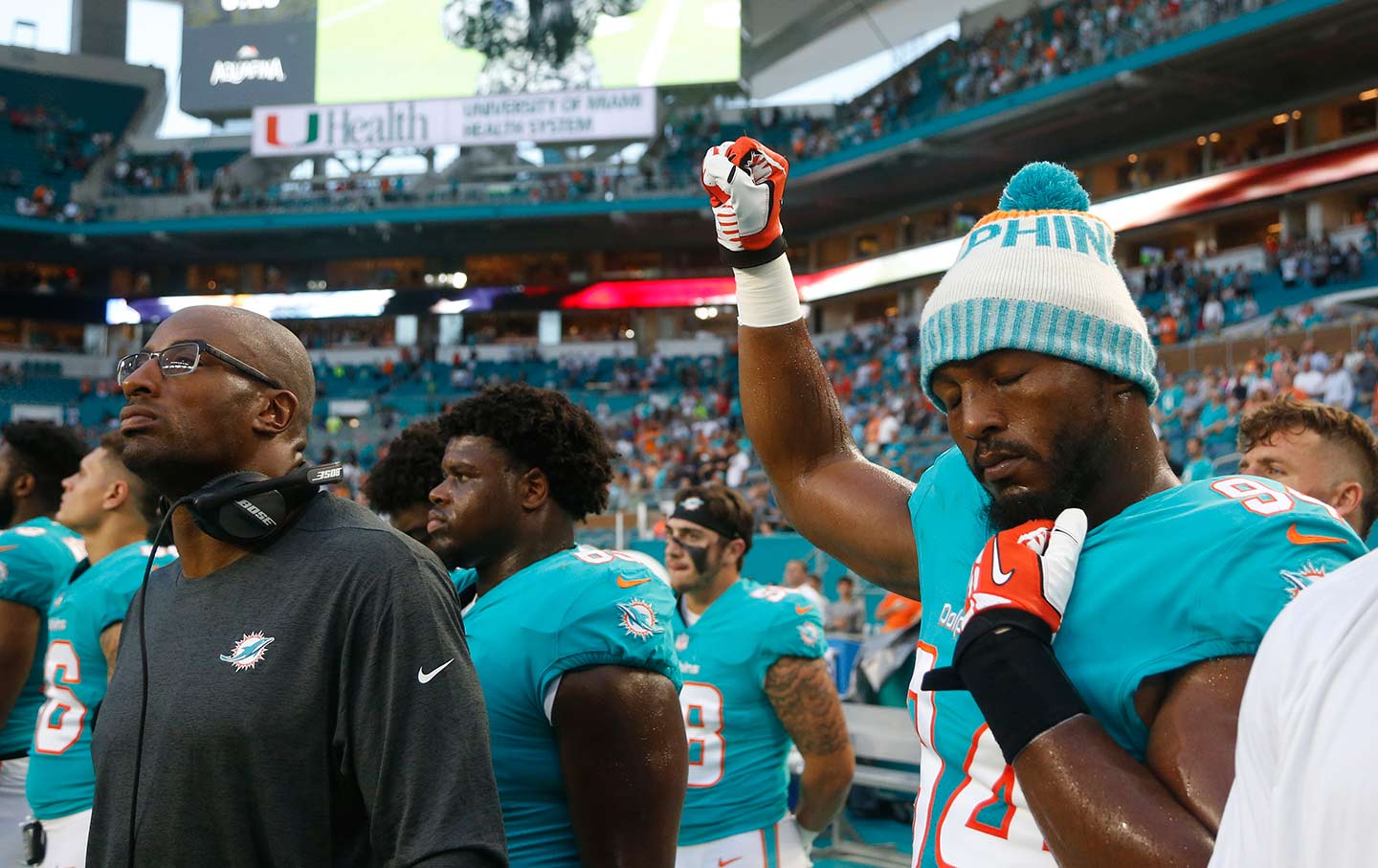 Donald Trump claims to not understand why NFL players are staging protests during the national anthem. He also asserted last week that many of the players who take a knee or raise a fist don’t even know what they are protesting about. But if there is one group of people who absolutely understand why these elite athletes are risking their livelihoods, losing sponsors, and enduring threats, it is the police unions. They know what blackballed free-agent quarterback Colin Kaepernick made plain almost two years ago: “There are bodies in the street and people getting paid leave and getting away with murder.”

The NFL player protests represent a call for justice and accountability—and the police know it. It makes them defensive… and aggressive.

Last Thursday, Kenny Stills and Albert Wilson of the Miami Dolphins took a knee during the anthem to continue the dissent against the normalization of police violence. Teammate Robert Quinn raised his fist. The local police union was not having it. Here is a statement posted to Facebook by the Broward County Policeman’s Benevolent Association in response to the protests:

The Broward County PBA recently offered our members discounts to a Miami Dolphins game because that franchise said they were going to honor all First Responders. We entered into this partnership with the understanding that the Dolphins organization would require their players to stand for the National Anthem. This did not happen at last night’s preseason game against Tampa Bay. As a result, the BCPBA will no longer participate in this ticket program, and we are asking all of our members, as well as members of the Dade County PBA and Palm Beach County PBA, not to participate either. If you have already purchased tickets to this game, we encourage you to call the Dolphins ticket office to request a refund because this organization obviously DOES NOT honor First Responders and the dangers they put themselves in every day.

That they see these protests as an attack on all police speaks volumes. Their apologists argue that these high-profile instances of police violence—the ones caught on tape that send shock waves across social media—are just instances of “a few bad apples.” But when players protest against these few bad apples, it is the police that defend the whole tree. (If still you want to know why these players kneel, see this latest footage from Baltimore. The officer in question has resigned but has not been charged.)

As for Kenny Stills, he has been remarkably consistent about his message, his support for Colin Kaepernick, and his work in the community. As Jason Lieser, the Dolphins-beat writer for the Palm Beach Post noted, “Kenny Stills has been awarded the Miami Dolphins’ community service award two years in a row, is heavily involved in various youth organizations, was a team captain last season, has been one of Miami’s most productive players and is considered a model employee by coach Adam Gase.”

This struggle will continue as long as police unions refuse to accept any accountability for the actions of their members. Perhaps, however, if the police unions are that upset, there are actions that they could take that would be more effective than having their members call for refunds and renounce the Dolphins organization. As one person tweeted to me, a gentleman by the name of Bones McKenzie, if police truly wanted to show their dissent, they should actually show up to the games… and take a knee.