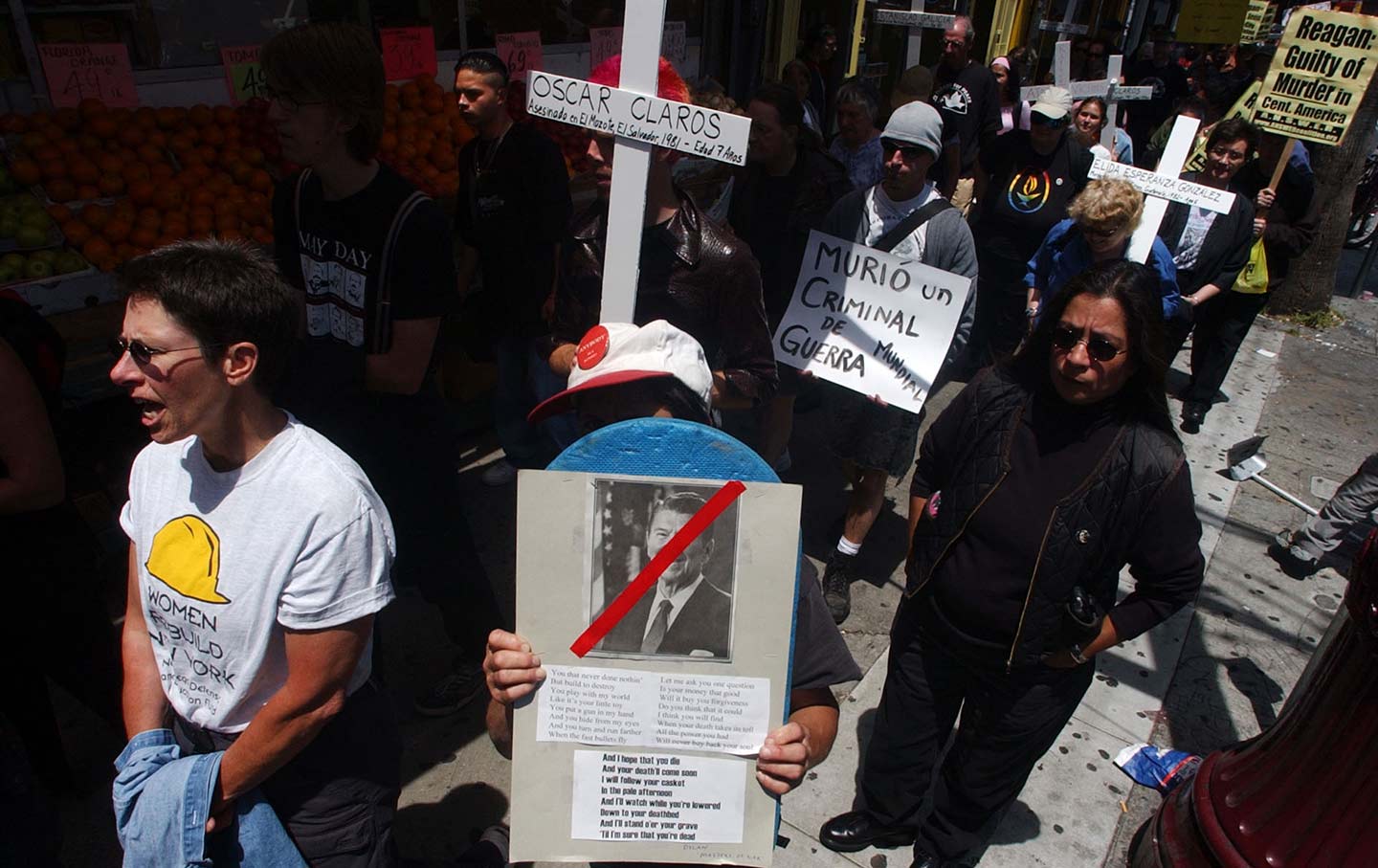 Central American refugees marched on the day of Ronald Reagan's funeral to denounce the former US president's policies, which were linked to thousands of deaths in El Salvador and Nicaragua. (AP Photo / Marcio Jose Sanchez)

Donald Trump is a bellicose, short-tempered, and impulsive commander in chief, and so it’s entirely plausible that he might attack Iran or devise some other foreign intervention. Such assaults would spark protests around the country, but in some sense, it would already be too late. Organizers would be scrambling to fight an action that had already been taken.

Facing a problem like this, the question that progressive social movements must ask is: How do we build resistance before disaster strikes—both so that officials might be deterred from taking reprehensible actions, and so that if odious policies are enacted or misguided foreign interventions launched, the public response can be strong and immediate.

Thirty-five years ago, organizers in the Central American solidarity movement had a strategic breakthrough on this question: a pledge.

In the early 1980s, the Reagan administration was sending aid and arms to Central America, ostensibly to stop the spread of Communism. In El Salvador, the United States supported a government behind death squads that murdered thousands of civilians, including Archbishop Oscar Romero. In Nicaragua, Reagan funded paramilitary Contras determined to destabilize the left-wing Sandinista government. After the White House ordered troops to invade Grenada in October 1983, participants in the Central American solidarity movement—a diverse network of groups that had formed in opposition to US policy—feared that Nicaragua or El Salvador could be next.

To Fight Trump, Take to the Streets!

How ‘No More Miss America’ Announced a Feminist Upheaval

A few weeks later, a group of religious activists met at the Kirkridge Retreat Center in eastern Pennsylvania and created what they called “A Pledge of Resistance.” Those who took it promised that if the Reagan administration sent troops to Nicaragua, they would travel there in a nonviolent attempt to impede the invasion. Several dozen signed on, and the magazine Sojourners began to publicize the idea. In the summer of 1984, West Coast organizers inspired by the concept expanded and refined the pledge, relaunching it in the fall with the backing of a broad coalition that included the American Friends Service Committee (AFSC), the Inter-Religious Task Force on Central America, and the Committee in Solidarity with the People of El Salvador (CISPES). In the new version, participants vowed to engage in acts of civil disobedience—such as occupations of federal buildings and congressional offices—should the US undertake any major military escalation in Nicaragua or El Salvador.

On October 9, organizers commenced the first mass public signing of the pledge. They placed a table and public address system in front of the Federal Building in downtown San Francisco, and hundreds of people showed up. “At the last minute, we decided we would have an open mic,” said Ken Butigan, an early pledge organizer who later became national coordinator of the campaign. “We thought maybe a couple of people would come up and say something about why they were signing.”

In the end, more than 200 people took a turn at the microphone, explaining in personal terms why they were taking the vow. These included individuals who had spent time in El Salvador and Nicaragua and had seen the suffering caused by US actions. “There were Vietnam veterans, people who had been doing sanctuary work with Central American refugees, people who were opposed to war,” all describing how they came to see their own government’s policies as requiring active opposition, Butigan explained. “It was really very moving.”

As many as 700 people signed the pledge that day, and in the weeks after, many more followed. Commitments poured in from throughout the country, and in December, organizers delivered more than 42,000 completed forms to the State Department, warning the administration of the resistance that military action would provoke. Within two years of the pledge’s launch, 80,000 people had signed.

There were several precedents for the pledge. Perhaps most prominent was the Vietnam War–era Call to Resist Illegitimate Authority, a 1967 petition that encouraged draft resistance and included among its original signatories Dr. Benjamin Spock and the Rev. William Sloane Coffin—who were subsequently prosecuted by the federal government for interfering with conscription efforts. But the Central American Pledge of Resistance was unique in linking disobedience to an invasion that had not yet happened. By providing a threat of future action, the pledge bore resemblance to the strike votes taken by unions to show unity and demonstrate workers’ readiness to walk off the job. “The innovation in the ’80s was that the pledge had a trigger event,” explained Jeremy Brecher, a social movement historian. “It was a very creative way of establishing a nonviolent deterrent.”

As it morphed from a tactical idea into a national organization, the Pledge of Resistance made use of a decentralized structure. A “Signal Group” met regularly in response to new developments to determine if and when the network should be mobilized. If they gave the signal, word would spread through 10 regional coordinators to 400 local chapters. These were based not just in large cities—Boston, San Francisco, Chicago—but also in many smaller areas, from Fox Valley, Illinois to Juneau, Alaska. By creating this infrastructure, the Pledge became more than a warning; it became a mechanism for preparedness. “If the United States invaded, we were not going to sit back and decide at that moment how to respond,” said Angela Berryman, who was then the associate coordinator of the Latin America and Caribbean Program at the AFSC and who served on the Signal Group. “We were going to be prepared to respond immediately. The pledge was an upping of the ante.”

The pledge had other important effects as well. Within the wider Central American solidarity movement, the Pledge of Resistance unified disparate participants around a single plan of emergency response, even as different groups continued their long-term projects. The solidarity movement was distinguished by the wide array of its activities, ranging from the strictly humanitarian to the intensely political, and it included devoutly religious groups alongside more secular ones. Organizations such as Witness for Peace took delegations of Americans to Nicaragua to see the situation firsthand; activists in the Sanctuary movement provided refuge for immigrants fleeing violence and persecution; religious congregations adopted sister cities in Central America and sent aid; activists lobbied Congress and organized speaking tours of people who had been directly affected and could share their stories with audiences in the United States. “Everybody was involved in different aspects of the movement,” Berryman said. And in this context, the pledge was “a way that we could call everybody together if the government escalated, and we could mobilize at a moment’s notice.”

The Pledge of Resistance earned a reputation as the “direct-action arm” of the movement. The Signal Group identified several moments when it advised mass protest—including in March 1988, when Reagan deployed 1,800 troops to the Honduran border with Nicaragua, and in November 1989, when the Salvadoran army murdered eight people, including six high-profile Jesuit priests, on the grounds of El Salvador’s Central American University. In the latter case, the group helped initiate more than 1,000 demonstrations, in which nearly 2,500 people risked arrest by occupying congressional offices and other federal buildings.

Starting in 1987, Pledge organizers in Northern California played a central role in maintaining a two-year human blockade of trains carrying munitions from the Concord Naval Weapons Station destined for Central America, forcing authorities to make hundreds of arrests to clear the tracks and regularly causing major delays. As historian Christian Smith, author of Resisting Reagan, wrote of Central American solidarity efforts, “Even cautiously judged, it is apparent that the movement made the Reagan administration’s Central American policy of low-intensity warfare exceedingly difficult to implement, and therefore helped to limit significantly the severity of its destructiveness.”

In the decades since, a variety of social movements have taken inspiration from the Pledge of Resistance, including the campaign against the Keystone XL Pipeline. On March 6, 2013, a coalition of groups including CREDO Action and 350.org published a pledge committing to civil disobedience if President Barack Obama approved the pipeline. By June, more than 62,000 people had signed on. Like the 1980s pledge, organizers used the vow to pull people into trainings and to lay the groundwork for large-scale disruption. As the president weighed his decision, activists engaged in preemptive civil disobedience in Boston, Chicago, and other cities. After a demonstration in Chicago in which former Obama staffers and donors were arrested outside federal offices, Becky Bond, then–political director at CREDO Action, called the protest “a preview of what’s to come if the State Department recommends approval of the pipeline.” Ultimately, Obama rejected the pipeline, a move that surprised industry insiders, who had once expected Keystone XL to move forward easily.

In the current climate movement, Extinction Rebellion organizers in the UK have made extensive use of action pledges. They have written about how “conditional commitments”—vows that make use of the idea “I will, if you will too”—can encourage widespread collective action. The idea is a powerful one: Endeavoring to undertake bold and risky disobedience alone can feel intimidating and isolating, but joining with others who have committed to protest can be inviting and empowering.

In the end, the Central American solidarity movement could not stop the Reagan administration from supporting governments responsible for horrific crimes. Yet the movement assisted thousands of refugees, bolstered congressional opposition to White House foreign policy, supported Central American communities in their own resistance, and possibly even averted the type of outright military action that seemed imminent after the invasion of Grenada. “It really was proactive and preemptive,” Brecher said of the pledge. “It created a situation in which, as hot as Reagan and his pals were to go in militarily, the political costs in the US were high enough that they didn’t do it.” Instead of protesting an attack after the fact, an organized movement was able to act first—and in doing so it created a model that could prove its utility again before Trump’s time in office is over.

Research assistance for this article was provided by John Bergen.