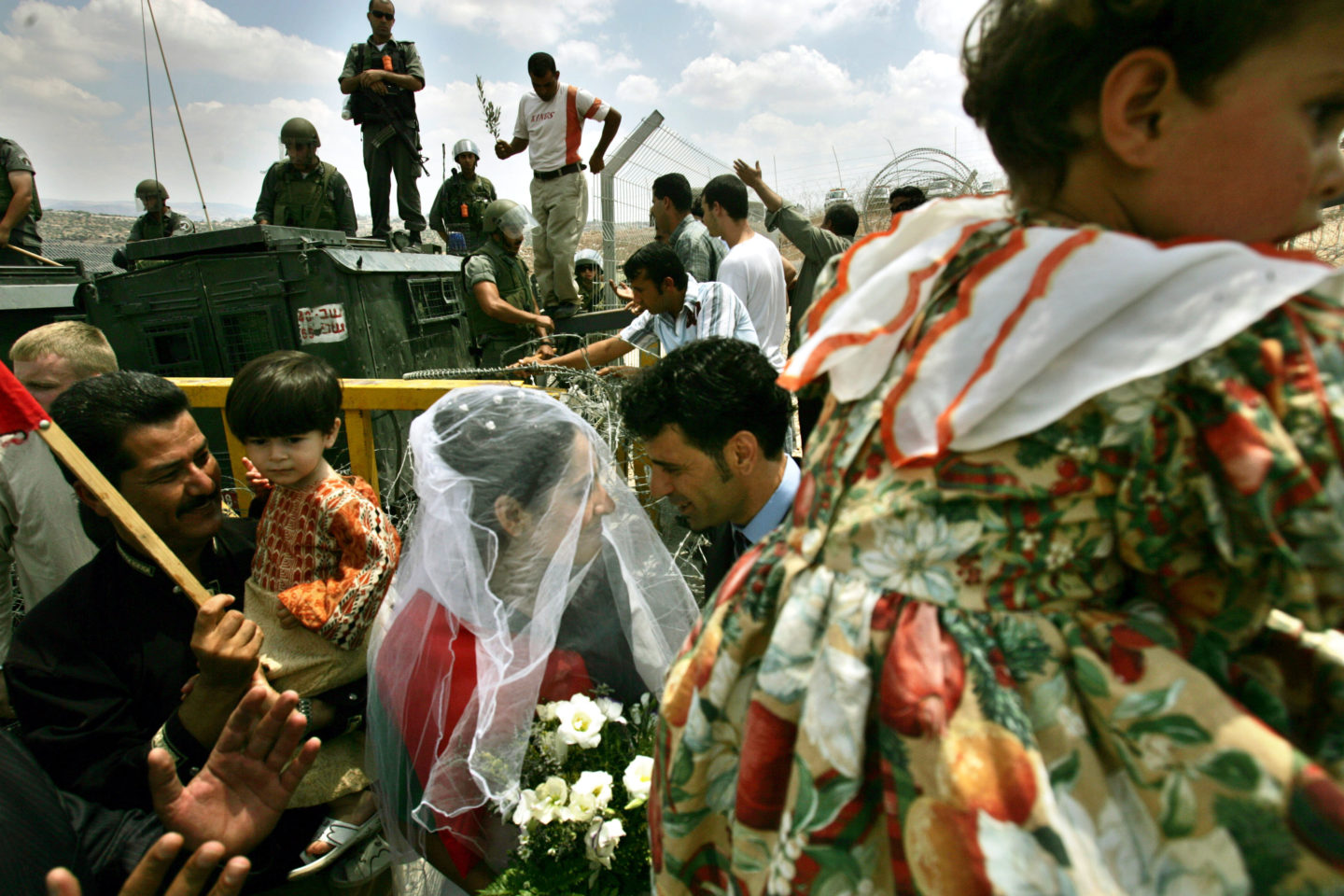 A Palestinian couple celebrate after their wedding ceremony, as part of a protest against Israel's separation wall. (AP Photo/Muhammed Muheisen.)

As Palestinians, my fiancée and I live under an apartheid system that places us and our families on opposite sides of a wall… a really big wall, the type of wall that Donald Trump dreams of.

My love, the woman I’m going to start a family with, is from Nazareth, where she lives with her family, inside Israel. As non-Jews, she and her family are therefore afforded the “privilege” of second-class Israeli citizenship. I live in Detroit, Michigan, but my family is from the West Bank, an area where Israel strictly controls the land, air, sea, and movement of Palestinians. They live under Israeli military rule, yet they are not granted the rights afforded to Israeli citizens. This means that I too live under Israeli rule when I visit, even though I was born in Jerusalem, lived there as a child and can trace my family roots throughout historic Palestine, including cities like Haifa, which are in modern-day Israel. I’m also a citizen of the United States, the largest financier, supporter, and protector of Israel in the world, but Israel doesn’t treat Palestinian-Americans like other Americans.

In order for Palestinians like me to visit Palestinians like my fiancée, we need to apply for a permit or a “tasreeh” issued by the Israelis to enter into Israel. These permits are routinely denied for a variety of reasons, and sometimes those reasons are never given to you. Meanwhile, settlers living on stolen Palestinian land in the West Bank do not need permits to travel freely to and from Israel.

In our tradition, the groom goes to the bride’s father and family to request her hand in marriage. So it was important to me, during a recent trip home, to be able to make it to Nazareth. I had already failed to secure a permit once during the trip, something I had hoped to do so that I could accompany a delegation of scholars, activists, and artists from Philadelphia around historic Palestine. I had prepared myself mentally for the possibility that I would be denied again, because that is just the reality for Palestinians.

My fiancée was visiting me in the West Bank in the days leading up; as a citizen of Israel, even though Palestinian, she does not need a permit to visit us. She sat with us as my family and I discussed the difficulties we were facing in gaining permits. One aunt of mine shared how heartbroken she and her husband were when the Palestinian official told them they were unlikely to have a chance to attend my engagement ceremony—and in fact that the groom (me!) was unlikely to get a permit as well.

Needless to say, my fiancée was devastated. I watched as the expression on her face passed from shock to confusion to worry. She thought first about how much pain it would cause her, us—but she quickly began to worry about her parents, her family, the banquet hall that had been booked, the chef who had been contracted, the sweets that had been ordered, the clothes that had been purchased, the days that were taken off of work. Engagement parties are huge family festivities in Palestine, but now it might all be for nothing if I could not even make it across an imaginary line drawn by Israel.

I tried to assure her that all would be fine in the end, but how could I really know? I found myself doubting whether I could make it. Love and relationships are already challenging enough for us as humans—why must we love under apartheid?

My fiancée didn’t sleep well for the next couple of nights. I did all that I could to console her. I did all that I could to secure the permit from Israel’s occupying army, which denies me my right to move freely in my own homeland. I even agreed to an added layer of surveillance by submitting my fingerprints and receiving yet another form of identification issued by the Israelis. And yet, we knew nothing for sure.

On a Thursday afternoon in late November, less than two days before our engagement, I received word from my family that I had, in fact, secured a permit for two days to enter my homeland. The permit specified that I was not allowed to stay overnight and, in fact, was only allowed to stay from 5 am until 10 pm for those two days. What this meant was that I would need to leave each night and go through the process of passing through checkpoints and traveling by bus and car all over again the next morning. Even with the permit, I wondered whether the soldiers at the checkpoint would reject me and deny me entry, as they routinely do. The irony that my US tax money supports this subjugation is never lost on me.

Friday morning came; I crossed the checkpoint to get into the city I was born in, Jerusalem, and proceeded to take a bus towards Nazareth to meet my future in-laws and prepare for our engagement. Some of my closest family had been denied permits, but a few of my aunts and uncles as well as my late grandfather’s wife and a handful of cousins were able to attend and loved it. They felt a connection to our new family and celebrated as if it were their own child’s engagement. My fiancée’s parents were the most loving and welcoming people I could hope for.

We were fortunate. Many other Palestinians are not able to get permission to be with their spouses and other loved ones because of the restrictions Israel imposes on their movement. Millions more have never had the chance to go home to Palestine, forbidden from connecting with land, tradition, and family. Still, the dream of a free Palestine remains, and we recommit to it through action, including loving each other.