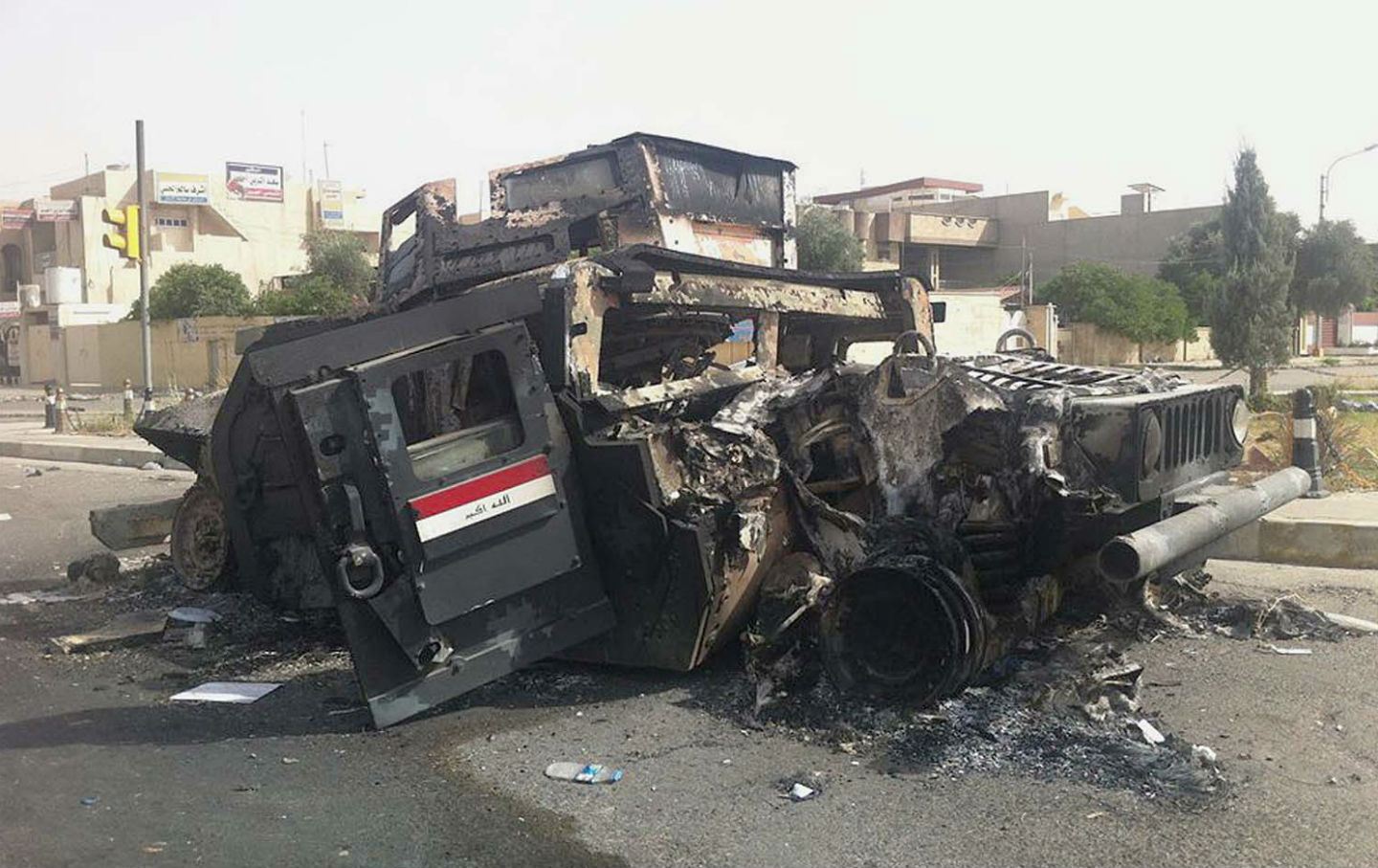 The fall of Mosul to the so-called Islamic State group (called in Arabic Daesh) on June 10, 2014, startled the world. The spectacle of thousands of Iraqi army troops fleeing the city in the face of black-masked suicide bombers and the Muslim equivalent of biker gangs riveted attention on Iraq again, a country that had receded from the Atlantic world’s consciousness after the US withdrawal late in 2011. A few weeks later, the Daesh leader, who goes by the nom de guerre of Abu Bakr al-Baghdadi, declared a caliphate, putting himself forward as a successor of Ottoman Sultan Abdulhamid II and his successor Sultan Mehmet V, who had also asserted themselves vicars of the Prophet before the Ottoman state collapsed in the maelstrom of World War I and a militantly secular modern Turkish republic abolished the caliphate by act of parliament in 1924. A frisson of terror went through Iraqis at the prospect that the movement might take Baghdad (now largely Shiite) and Erbil (the capital of Iraq’s Kurdistan Regional Government).

A year later, in many ways the US and Iraqi response is in some disarray. President Obama made waves Monday when he admitted that Washington and Baghdad still do not have a complete strategy for fighting Daesh. He is allegedly considering accelerating the US military training program for reconstituting the Iraqi army. The fall of Ramadi to Daesh in mid-May cast a pall on the campaign against it and raised severe questions about the competence and willingness to fight of the Iraqi army (or perhaps even the existence of the Iraqi army), as well as about the future of Iraq. While Ramadi’s loss was a major blow to Baghdad, which is only 78 miles away, it is a fiercely Sunni city in the midst of a fiercely Sunni province with direct logistical lines to Daesh headquarters in Raqqa, Syria. A dispassionate survey of the Iraqi Shiite government’s battle with Daesh would reveal that in two other provinces near the capital, Diyala and Salahuddin, it has had impressive successes, even if these have been attained only with the help of militiamen, Iranian advice, and Western bombing raids.

It is important to underline, however, that in the past year it has also become clear that Daesh was not invincible and could be contained, once President Obama authorized the use of the American Air Force and convinced allied air forces to lend support to those Iraqi forces on the ground willing to stand up to it. (Whatever he says, though, Obama’s policy of aerial intervention is mainly aimed at containment; he views the rollback of Daesh as a responsibility of locals). Likewise, Iran’s special forces, led by Qasem Solaimani, intervened crucially with strategic advice and logistical help. It was also important that Grand Ayatollah Ali Sistani, the spiritual leader of the Shiites, issued a ruling calling on all Iraqis to join with the army in defending the Iraqi nation from Daesh. Sistani favors the Iraqi military, but his fatwa helped to galvanize the Shiite militias. Also important was that President Obama and other outside governments pressured the ruling Shiite Islamic Call Party (al-Da’wa al-Islamiya) to dump the abrasive and conspiratorial Nuri al-Maliki as prime minister, replacing him with Haydar al-Abadi, who has more social skills. Al-Abadi, however, is still a man of the Shiite religious right, and a more ecumenical leader would certainly do Iraq more good now.

Iraqi Shiites supporting al-Abadi’s government in Baghdad have inflicted five major military and territorial defeats on Daesh, often with the support of Sunni tribal levies and the Kurdish Peshmerga or paramilitary. First, they rescued the besieged Shiite Turkmen at Amerli in Salahuddin province in August of last year, for the first time showing that a combination of Iraqi troops, Shiite militiamen, Iranian advisers, and American aerial bombing raids could push Daesh back. Since Daesh views Shiites the way the Nazis viewed Jews, this early action in the campaign prevented a massacre of the some 15,000 people who lived in that small town.

Then the Shiite forces forestalled a Daesh pincer movement on the capital of Baghdad from the west by defeating it late October in Jurf al-Sakhr, a largely Sunni city south west of the capital. Then they pushed Daesh out of key positions in the eastern Diyala province abutting Baghdad on one side and Iran on the other (and perhaps Iran was especially eager to remove them from its proximity). Daesh had established itself in parts of Baquba, Muqdadiya, and the Diyala River valley, but by January of 2015 the Iraqi military declared Diyala firmly in government hands. Kurdish peshmerga paramilitary units also intervened against Daesh in northern Diyala province, where there is a significant Kurdish population.

A unit of the Iraqi military took most of the oil refinery town of Beiji away from Daesh in mid-November of last year, depriving it of important revenues from the sale of refined petroleum products like kerosene and gasoline. Beiji’s neighborhoods have gone back and forth from regime to Daesh hands since, but last weekend the organization was again almost completely pushed out of the city, in part by rapid reaction forces of the Ministry of Interior supported from the air by Britain’s Royal Air Force. Finally, Daesh was defeated by early April in Tikrit north of Baghdad, a major Sunni city of some 300,000 that was the birthplace of Saddam Hussein and many other high Baath officials who bestrode Iraq in the 1980s and 1990s. The initial Tikrit campaign was planned out by Iran and was a land action that ran into trouble because of Daesh booby-traps and medium weaponry such as artillery and armored vehicles. The vast majority of the fighters were militiamen, supported by only one Iraqi military brigade and by a thousand Sunni tribesmen. The campaign stalled out because Washington, miffed at being sidelined by an Iranian-planned battle, at first declined to send aerial support. In the end, faced with the prospect of a Daesh victory, president Obama ordered bombing raids in aid of the attack on Tikrit, which turned the tide.

Since I’ve been looking at the Shiite response, I haven’t told the story of the likewise impressive Kurdish victories against Daesh, both in Iraq’s Ninewah Province and in the Syrian Kurdish population enclaves (Kurds, who do not speak Arabic as their mother tongue, are perhaps 22 percent of Iraq’s 32 million people and 10 percent of the 22 million Syrians). Kurdish actions certainly helped defeat the Daesh advance in Diyala province in Iraq.

The Baghdad government’s genuine successes against Daesh in Diyala and Salahuddin provinces put the capital out of danger for a long time and demonstrated that the vicious theocracy was hardly invincible. These victories required a motley combination of Shiite militias, rump Iraqi army units, Iranian Revolutionary Guards Corps advisers, sometimes support from the Kurdish paramilitary and Sunni clans, and American and other coalition close air support and bombing raids. The Americans and their allies destroyed the medium weaponry it had captured from the Iraqi army in Mosul, and which gave it an advantage over Shiite guerrillas. Without that advantage, it was guerrilla on guerrilla, and the Shiites are perhaps three times as numerous. The upside of defeating Daesh, pushing it away from the capital, and demonstrating that its fighters were not ten feet tall had a downside. Shiite militias and Iranian advisers took the lead in these operations, given an anemic Iraqi military that had largely collapsed. At Tikrit, there were 3,000 government troops and 20,000 Shiite militiamen, along with a thousand Sunni fighters. For Iran-backed Shiite militias to take Tikrit was a symbolic humiliation of the Sunni Arabs and did nothing to attract Sunni support for the effort against Daesh, even though most Iraqi Sunnis oppose its brutality and extreme fundamentalism.

Even if Baghdad does nothing differently, it seems to me likely that over time it will prevail against Daesh by brute force and by virtue of its many allies, from Iran to NATO to Russia, and because of the overwhelming demographic superiority of the Iraqi Shiites (likely 60 percent of the Iraqi population versus some 17 percent for the Sunni Arabs). Not to mention that the Shiites have as allies in this endeavor the Kurds, who, though mostly Sunnis, practice a far different form of Islam than Daesh or are secular-minded, and who want to see the organization crushed. But this process of purely military rollback will be ugly, in the way that the Jurf al-Sakhr and Tikrit campaigns were ugly. To many Sunnis in Iraq and in the Gulf, this reconquest looks like an alien branch of Islam oppressing Sunnis rather than like a rescue of the Sunnis from the bestial brutality of Daesh (its theorists promote “acting like beasts” or tawahhush in Arabic, as a means of cowing the population). Prime Minister al-Abadi needs to move much more quickly to build a non-sectarian Iraqi army. And, he needs to get over his fear of arming the Sunni population willing to fight Daesh, or he is in danger of losing key Sunni allies to Daesh.