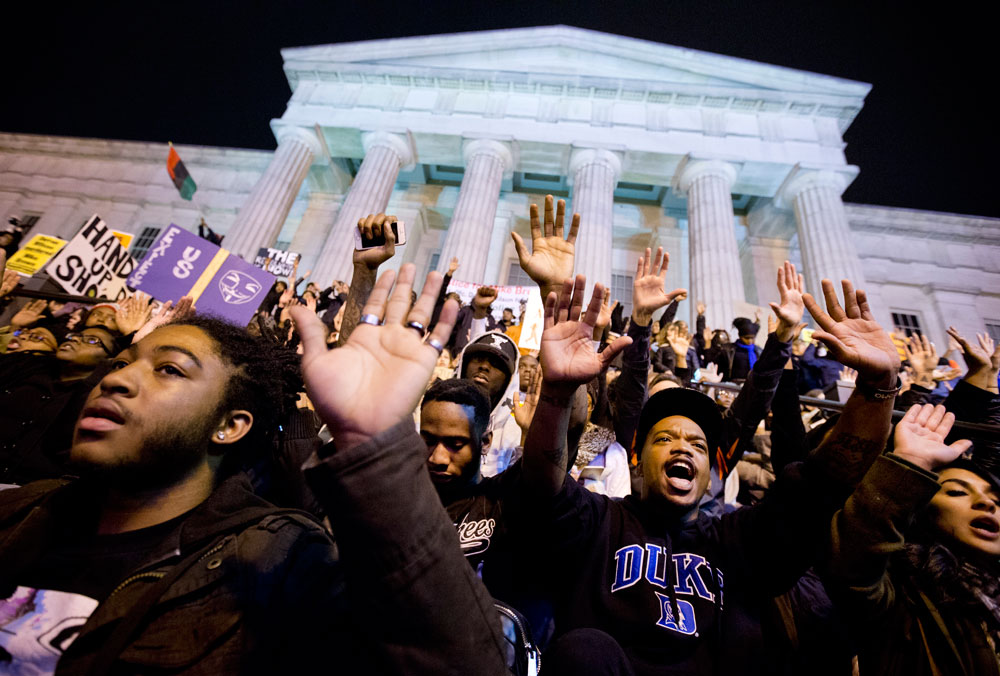 A crowd of protesters yell from the steps the National Portrait Gallery in Washington, Tuesday, November 25, 2014. (AP Photo/Carolyn Kaster)

Shortly before 2 in the afternoon on Sunday, more than a dozen people walked onto an interstate near the Capitol in Washington and formed a human chain. Eight lanes of traffic came to halt. During rush hour the next morning, protesters closed down the Fourteenth Street bridge. And then the Twelfth Street tunnel. “Shut it down for Mike Brown,” they chanted.

In the week since a grand jury declined to indict Darren Wilson, the police officer who killed Michael Brown in August, demonstrations have occurred in more than 150 cities across the United States. In Missouri, protesters are marching 127 miles from Ferguson to Jefferson City, the state capital. Shopping malls and public-transit stations and major roadways have been shut down in several cities. On Monday at 12:01 pm—the time Brown was shot—workers and students across the country walked out of their offices and schools.

Cold rain in Washington on Tuesday night didn’t keep people away from a town-hall meeting at Busboys and Poets, where the room reserved for the event was so full that latecomers watched on a projection screen hung in the main dining room. Over more than two hours, a panel and the audience talked about harnessing the energy and anger unleashed by the non-indictment.

“This is not a protest—it is an uprising,” said Kymone Freeman, an artist and activist who’d recently visited Ferguson, by which he meant: people thousands of miles from Ferguson aren’t shutting down streets only because Darren Wilson killed Michael Brown with impunity, because cops turned a town into a battlefield, and because local officials were either incompetent or malicious; but also because similar expressions of racism surface everywhere. “Ferguson is Anyhood, USA,” said Eugene Puryear, another activist on the panel, who ran for a seat on the DC City Council in November.

In DC, the Metropolitan Police Department has long been criticized for racial discrimination; at an October city council hearing, residents told a number of illustrative stories, including one about police asking a teenager if his bike was stolen because it looked expensive, and another about officers storming a barbeque and shooting a dog after a report of marijuana use. “From day one, we’ve made it about local issues here, and the ability to take the energy of a mass movement and bring it home to make somebody here in Southeast DC want to be a part of it,” DC Ferguson organizer Salim Adofo said at the meeting. One of the reforms that the group is calling for in DC is an end to “jump-outs,” where officers in unmarked cars suddenly stop and detain people in the street.

An agenda put forward by the activist group Black Youth Project 100 includes a number of other reforms that could be implemented at the local level, such as establishing or strengthening community police-review boards (elected bodies with independent authority to investigate police misconduct); ending police presence and zero-tolerance policies in schools; and decriminalizing marijuana. Adam Inyang, who works with BYP100’s DC chapter, told me at a demonstration last week that the group would be pressuring city officials to move on those changes in the coming months, particularly for the creation of a review board. “A lot of people are concerned that this whole thing is gonna taper off, is gonna end, is gonna die out like many of the other situations. But we’re stepping up to continue to organize and to continue to drive these points forward,” Inyang said. “That’s what we can strive to now.”

DeRay McKesson, an activist who’s been in Ferguson and spoke at the meeting via webstream, explained that shutting down roads and other disruptive actions were an end in themselves. “There’s this thing about disruption, right: our lives have been fundamentally disrupted by the killing of our brothers and sisters and our kids and our mothers and fathers. We work hard to put that disruption back in the life of the city,” he said.

Still, the town-hall meeting raised unanswered questions about the broader goals of the demonstrations, and about “reform vs. revolution,” as moderator Nefta Freeman put it. Puryear noted that the gap between protest and long-term organizing still has to be bridged. “Right now, just to be honest, we have tactics—we do not have strategy. We are doing a lot of interesting things and a lot of important things…but ultimately, where is it going? What are we doing? What are we really asking for?” he asked. “We’re ready to get arrested, and I love that. I’m ready. But are we ready to build institutions?”

Small-scale reforms—requiring police to wear body cameras, for example—have attracted most of the attention from politicians and the media, but Puryear was talking about mobilizing for more fundamental change. “If we recognize the system doesn’t work for us, we need a new system,” he said. “If you want to get rid of that system, then you’re talking about getting rid of capitalism. I know people are afraid to say that, but it’s true.”

What was clear from the meeting at Busboys was that activists in DC are ready to escalate, not to back down. “We’re going to shut stuff down, I promise you that,” said Erika Totten, who described herself as a soccer mom from Alexandria, Virginia, and said she was trying to protect her children.

Several speakers expressed frustration with President Obama’s tepid response, particularly the claim he made after the grand jury announcement that he’s “never seen a civil-rights law or a healthcare bill or an immigration bill result because a car got burned.” Maryland Democrat and Congressional Black Caucus member Elijah Cummings attended the meeting, and he and other members of his caucus came under fire for not supporting an effort in the House to end the transfer of military equipment to local police forces through the Pentagon’s 1033 program.

“Guess what, President Obama? It was over 100 days of peaceful protest, but we didn’t get a meeting with you then. But now, when Ferguson burns, when protests are happening all over the country, now all of a sudden we can get your attention,” said activist and hip-hop artist Jasiri X. “Now when it burns down you want to have a conversation about putting cameras on police. Well, guess what—it was a video camera that showed Eric Garner being choked by NYPD.” (On Wednesday, a grand jury in Staten Island declined to indict the officer in the case, despite video evidence showing unarmed Garner saying he couldn’t breathe.)

Ronald Hampton, former executive director of National Black Police Association, noted that “the civil rights struggle wasn’t a quiet struggle, it wasn’t, ‘Can you give this to me?’ ” He went on, “I’m not condoning violence, but I’m telling you I’m tired of doing this. I’m tired of doing this. So it’s time for us to be serious about what it’s going to take. And it’s going to take us being up in the street.”