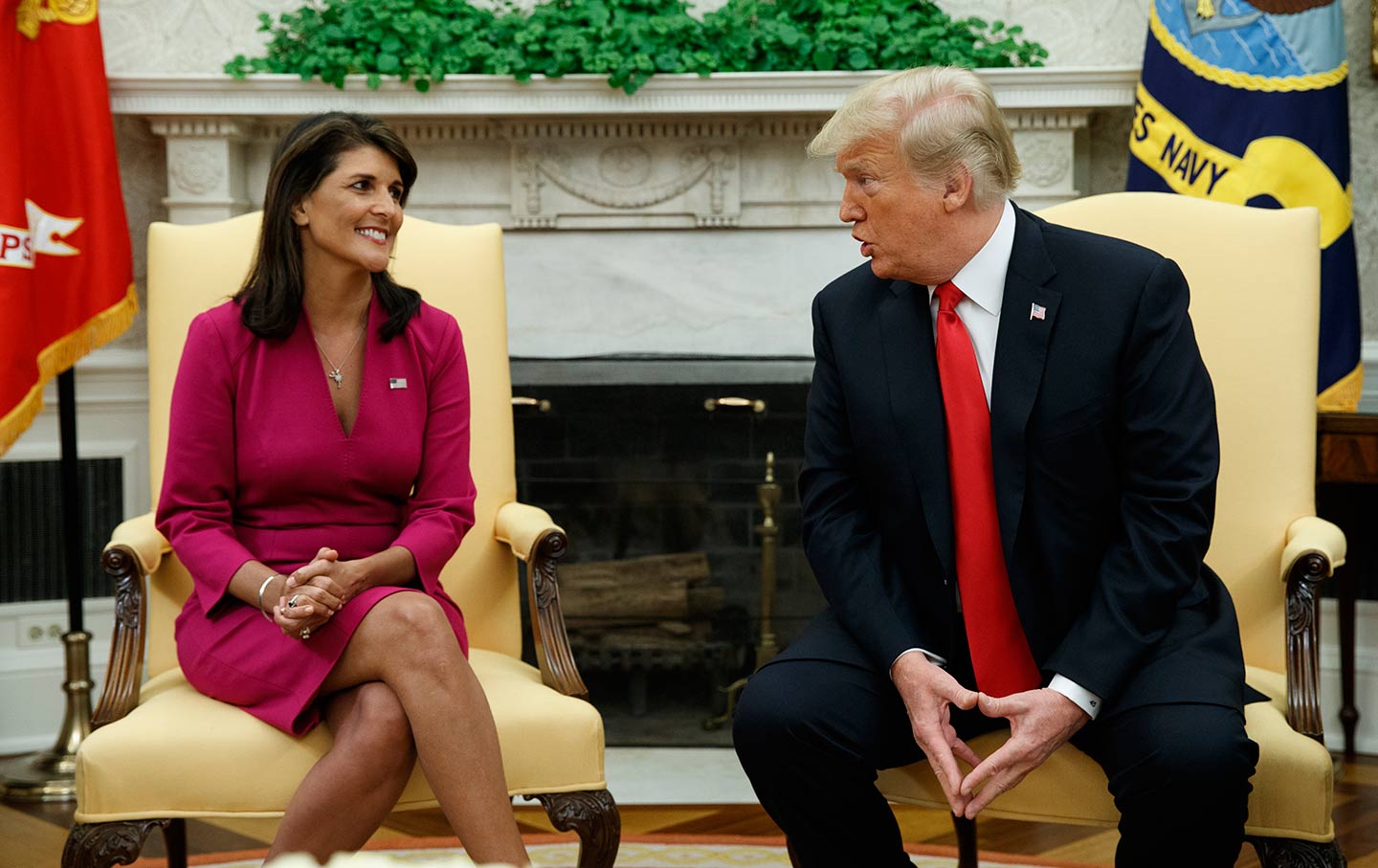 Nikki Haley had a good take on Donald Trump when he was running for president. In a clear rebuke to the anti-immigrant, anti-refugee populism that Trump was stoking, the daughter of Sikh immigrants from India declared early in the 2016 campaign season that “During anxious times, it can be tempting to follow the siren call of the angriest voices. We must resist that temptation. No one who is willing to work hard, abide by our laws and love our traditions should ever feel unwelcome in this country.”

She told NBC that “Mr. Trump has definitely contributed to what I think is just irresponsible talk.” As the Republican governor of the critical primary state of South Carolina, she backed Marco Rubio’s comically inept bid to prevent Trump from becoming the Republican nominee. When Rubio’s campaign collapsed, she went to the bottom of the barrel and backed Ted Cruz. When Trump ripped her on Twitter—“The people of South Carolina are embarrassed by Nikki Haley!”—Haley responded: “Bless your heart.” As the general election approached, the governor admitted that, while she would vote for fellow-Republican Trump rather than Democrat Hillary Clinton, “I’m not a fan of either one.”

When the votes were counted and Trump emerged as a surprise winner, however, Haley quickly warmed to Trump and Trumpism. A famously ambitious politician—Haley’s 2016 campaign-season sniping at Trump was widely seen as part of a plan to position her as contender for the party’s 2020 presidential nomination—she wanted to be part of the new Republican administration. Even if it was led by the guy she had so recently decried as angry, irresponsible, and divisive.

Haley was angling for a cabinet post, or perhaps a place even closer to power as a member of the National Security Council. But she settled for a gig as the president’s ambassador to the United Nations.

Because of their tumultuous past, there was speculation that Haley would serve as a dissident within the Trump administration—an “adult in the room” who might break with the president on at least a few issues of consequence, or perhaps influence the administration to consider more thoughtful approaches to international affairs.

Didn’t happen. As Haley prepares to exit her UN post, she does so as a full-on Trumpkin who says that promoting the president’s agenda on the global stage has been “the honor of a lifetime.” Trump is equally lavish in his praise of Haley’s ambassadorship, saying that “she made it a more glamorous position, she’s made it, more importantly, a more important position.” But Vice President Mike Pence has summed things up best by hailing Haley for “faithfully advancing President Trump’s America First agenda.”

That she did, providing cover for the president’s most extreme and dangerous pronouncements and policies. Trump has never shown any respect for the UN, and Haley made it clear that her ambassadorship would focus on “protecting our interests” rather than forging partnerships or promoting peacekeeping and diplomacy. Indeed, one of Haley’s biggest projects at the UN was downsizing the UN, with threats of cuts in US aid and steady prodding to reduce the ambitions of the global body. Haley grumbled, “We will no longer let the generosity of the American people be taken advantage of or remain unchecked.”

With that line, Ambassador Haley was echoing Trump—a project at which she proved to be strikingly adept.

When Trump scrapped the Iran nuclear deal, Haley said the president “absolutely made the right decision.” When he moved to pull the US out of the Paris climate accords, she made excuses for him. When he threatened to blow up North Korea, she amplified his bombast. When he aligned with dictators and abandoned historic commitments to human rights, she was cool with that. When he undermined prospects for Middle East peace by moving the US embassy in Israel from Tel Aviv to Jerusalem, she not only supported the break with the past policies of Democratic and Republican administrations but threatened allies who dared to disagree with Trump’s new line. “At the UN, we’re constantly asked to do more and give more—in the past we have. So, when we make a decision, at the will of the American people, about where to locate our embassy, we don’t expect those we’ve helped to target us,” said Haley, who announced that “there will be a vote at the UN criticizing our choice. And yes, the US will be taking names.”

That wasn’t very diplomatic. But Trump approved. And that was the point.

Though she tried to suggest that she was willing to speak truth to the president’s power, the fundamental truth of Haley’s tenure at the UN was that she was an all-in Trumpkin. Even when she suggested in a recent opinion piece that she sometimes disagrees with the president, Haley did so as an enforcer of political discipline. Her Washington Post article attacked the author of an anonymous critique of Trump published in The New York Times with the argument that “When I challenge the president, I do it directly. My anonymous colleague should have, too.”

There is very little evidence to suggest that Haley served Trump as an “adult in the room.” She was an ally, an apologist, and an acolyte of a man she once recognized as irresponsible.

But that is how politicians operate, and Nikki Haley will always be understood as a self-serving and self-promoting politician.